The great increase in railway activity in WW2 led to the development of a new type of signal box. 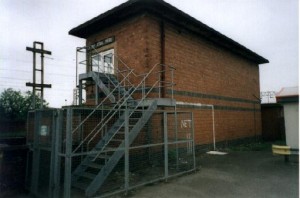 The running of the railways was as vital as was the safety of signalmen, so a strengthened signal box was developed with a concrete roof to give a degree of blast and incendiary protection.

The signaller was provided with a small air raid shelter or reinforced compartment at ground level so that, in the event of an air raid he was protected and could resume his duties immediately afterwards.

Other ARP SB’s exist north of Shrewsbury and by the railway lines which went to ROF Swynnerton, Staffordshire.

Many others must exist throughout the country, still performing their original job.