The village of Teston [pronounced Teason] is on the north bank of the River Medway and is four miles west of the county town of Maidstone.

A view of Teston Bridge and the River Medway looking North East.

In 1940 a section of the GHQ line defences ran through Teston and today six pillboxes, an anti-tank cylinder and a bomb crater on the river bank still survive. 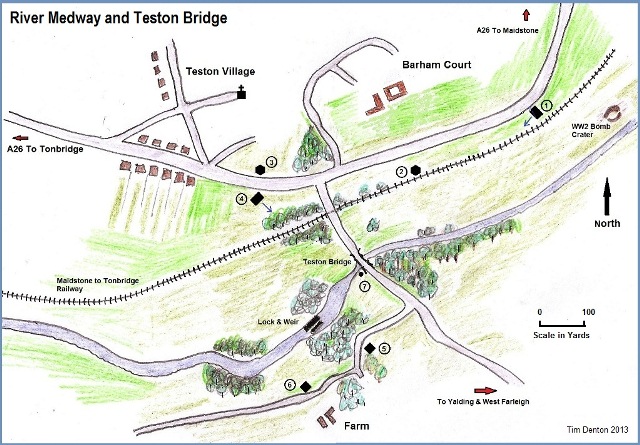 All the pillboxes are built to shellproof standards and the defences consisted of two Type 28A and two type 24s on the north side of the River Medway, to the south of the river are two shellproof rectangular pillboxes. The sketch map shows the positions of the defences in relation to the river and the village.

On a sharp bend on the A26 at the east of the village there is a Type 28A pillbox just within the field [No 1 on map], this is in fairly good condition and shows the number 51 painted on the inside rear wall. 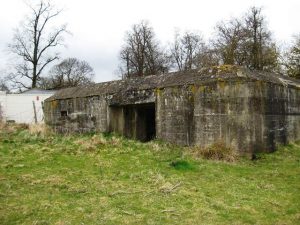 The embrasure is designed for the 6Pdr Hotchkiss QF gun but the plinth for the gun mounting is missing, approximately 100 yards west of this behind the rail embankment is a type 24 [No 2 on map].

The type 24 had been positioned here to enable sweeping fire over the railway line, this defence has suffered with damage on its south side probably caused by replacement of the railway fence, this shellproof type has is heavily built with entrance wall 52” thick.

The next two pillboxes [No 3 & 4 on map] are on opposite each other each side of the A26, on the north side of the A26 is a shellproof type 24 this is overgrown and within a private garden but part is visible from the verge, some years previously I was shown the pillbox by the owner, then it was in good condition.

South of the main road is the other Type 28A for the QF 6 Pdr gun, this defence was constructed on a slight incline with its main AT gun embrasure faces south east  covering Teston  bridge from a distance of about yards, the formidable gun emplacement is overgrown but internally it is reasonably clean and dry.

At the south side of the Medway but on the west side of the bridge there is a concrete block [No 7 on map] partly buried in the riverbank, this looks like a cylinder that once formed part of a road block, this is situated on private land  but can be seen during the winter from the bridge.

Once over Teston Bridge there is a right turn, this is a private road but with a public footpath so access is not a problem, following the road around the bend the first of the two shellproof rectangular pillboxes [No 5 &6 on map] lays close to the footpath at the corner of the field under trees.

The entrance to this faces north and the shellproof variant pillbox has three loopholes, unusually two wall corners are chamfered off with a three foot flat edge, internally the defence is dry and in good condition. Heading back to the track and heading west the ground opens up with a fantastic view of the River Medway from this high ground, approx 150 yards along is another rectangular pillbox set on a huge concrete base, this defence faces south with its entrance accessible by concrete steps on the north side.

With excellent views of the River Medway the Shellproof Variant Pillbox at Ngr TQ708528.

Internally the pillbox is dry but has vandalism and graffiti, from its loopholes it has a commanding view east, west and south of the river, its prominent position shows it could cover the open ground west of the B2163. it appears that these defences were built to operate the Bren Gun on its purpose tripod, a front leg well is set into shelf and supports for the rear legs are built onto some of the inner walls, as with the previous example it has two chamfered off corners and a smoke/fume vent set into the top of a wall.

As the GHQ Line runs north of the Medway it is unusual that both of the pillboxes stand on the south side of the river, maybe this meant that the old Teston stone bridge, weir and lock being so close together warranted some extra protection?

North east of the river and reached by footpath is a bomb crater that dates back to 1940 [I am told] this was here in 1953 when as a young lad my parents would take a family walk along this route.

Bomb crater beside the footpath on the River Medway, Teston.
Picture by David Ottway.

In the 1958 film Dunkirk starring John Mills and Richard Attenborough, Teston Bridge features where it is “blown up” early on in the film when the Germans are crossing, many scenes from the famous film were shot in the area including the farm sequence at a location south of Teston.