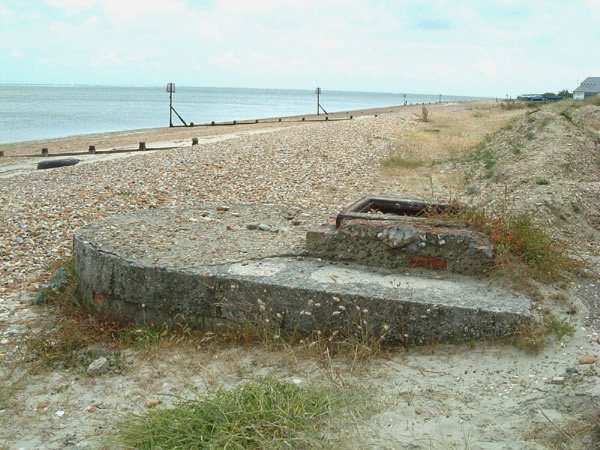 This very unusual structure was found on the far east side of Hayling Island very close to the sailing club at Sandy Point, the defence post overlooks the Emsworth channel which leads into the entrance way of Chichester Harbour and close to RAF Thorney Island which was an operational base during the war.

The low profile construction is shuttered concrete with a pebble dash type effect, it measures 9 feet by 7 feet and has a rounded front face with what appears to be two sealed loopholes, aaccess was by the drain cover type entrance on top.

I believe this may have been a coast watchers post for observation of the important waterway and harbour access, special operations were started from the Sandy Point location during WW2, these included commando reconnaissance of the D-Day beaches prior to invasion. 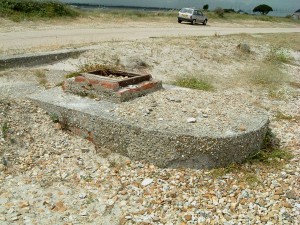 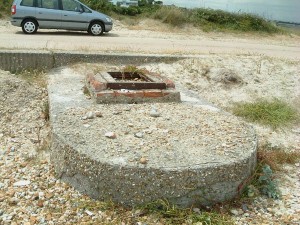 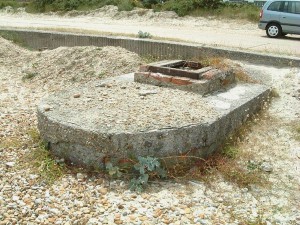 A relative of mine recalls playing in it as a young lad during the late 1950s, he clearly remembers climbing down an iron rung ladder and peering out of the then open loopholes, many years later the whole box was filled in with stones and shingle, movement of the beach over time has partially reduced the visible height of this defence.

Since this report was written in 2004 i believe the structure has been removed.