Porthleven is a small fishing village situated on the edge of Mount’s Bay approximately 8 miles south of the port of Penzance. It offers protection from much of the Atlantic weather with its granite block walls and shallow water harbour. 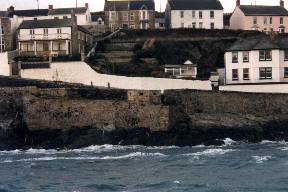 Type 24 Pillbox positioned on the ‘Breageside’ edge of the Outer Harbour at Porthleven.

Situated in an elevated position facing south it has a commanding view over the entrance to the harbour. As expected it has ‘loopholes’ on the five main elevations with an entrance and ‘pistol port’ at the rear. 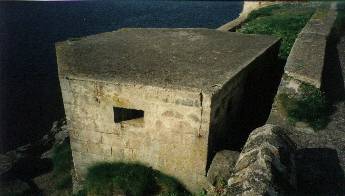 It is constructed of concrete blocks and extensive use of shuttered concrete. Internally, it has a blast wall to protect occupants from the open rear entrance. 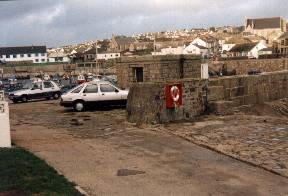 An Anti-Tank Wall located on the ‘Breageside’ edge of the harbour, adjacent to the ‘Ship Inn’. It is positioned to stop any vehicles moving along the harbour road. About half of its original length now remains. Constructed of concrete blocks with an infill of concrete it is approximately 12 feet long, 5 feet high and 4 feet in width.