A “New” Type Of Pillbox

It’s not often that one finds a truly “new” pillbox these days (I know – all of them are 60+ years old), but even rarer that a “new” name for a pillbox is uncovered. This is the story of how that came about, thanks to the Pillbox Study Group, Defence of Britain Project and co-operation between researchers.

Back in 1995 I visited a pair of pillboxes at Ratcliffe-on-Wreake near Leicester, having noticed them from the road. Both proved to be square prefabricated pillboxes of a type I first became aware of in Henry Wills “pillboxes” with a plan and photo of one on the Isle of Wight. Subsequently, I wrote a short piece for “Loopholes” asking for details of any other such pillboxes and illustrated it with my plan of the type . I was keen to try and find out who made the pre-cast components and who put them up. I had several replies over the following months, with information on sites across the South, Midlands and North of England. I compiled a list and plotted locations on a map, thinking that perhaps their place of origin might become clearer. They were sited on HAA batteries, the GHQ line, along canals and at a number of military bases. Then the Defence of Britain Project took off and I developed an interest in Auxiliary Units. My prefab pillbox research stayed on the shelf, partly since “Loopholes” went into suspended animation.

I still looked out for more information though. There was a picture in a book about National Servicemen and I was sent a copy of a sample Defence of Britain site report that was for a prefab pillbox . I tried visiting this and some of the other sites I had learnt of, an exercise that perhaps qualified for most miles covered in a fruitless search, as every one proved identical, with no indications of the maker visible. Once, at a friends wedding in Yorkshire, I spotted an old prefab concrete garage at the back of an ambulance station adjacent the churchyard. The construction style seemed very similar to the pillboxes, so (once the service and photos were over) I took a closer look. There was a name on one piece, “Kilpresco” of Rotherham. However, I could find out nothing else about this company.

The only thing my visits did reveal was a little more about the construction of these pillboxes. There is a series of open upright frames of reinforced concrete that span the width of the walls and are held in place with long bolts that stretch side to side through the structure into special corner pieces. The bolts were 2’3” up from the ground and 1’6” down from the roof. Concrete slabs of two sizes are held in place between these to form shuttering for the walls, except on two of the walls where the end sections are made of solid panels. The concrete fill between the panels is not steel reinforced on any of those part-demolished examples where this area can be seen. Prefabricated loopholes also slide into place also on specific vertical frames. Similarly prefabricated concrete roof girders supported atop the inner walls hold similar pre-cast slabs and the roof is poured on top, to depth of about 12 inches at most. There is a central loop in each side except on the side with the entrance, where it is offset to other end from the doorway.

The breakthrough came courtesy of Milk Wilks, who I had met through the Defence of Britain Project when we corresponded on the subject of Auxiliary Units. Indeed, Mick had co-authored an excellent book on the Worcestershire and Herefordshire Aux. Units . He hadn’t realised that I was also interested in pillboxes, until he saw some of my plans in old copies of Loopholes borrowed from Bernard Lowry (his co-author). In an odd twist of fate, it had been Mick’s site report on the Eckington Bridge pre-fabricated pillbox, which the Project used as an example. This very pillbox was to provide the vital clue. As part of Mick’s extensive research on Worcestershire’s defences, he had found a PRO file for 217 Army Field Co RE detailing the defences at the Eckington Bridge site (see his plan of the site reproduced here as fig 1) and others nearby. The direct quote is as follows, “Construction of dummy trenches, trenches for 1 section, Stent and LDV pillboxes, pimple road block, ‘Hairpin’ roadblock” 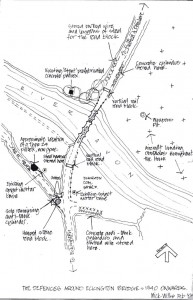 The same file also referred to an LDV pillbox further along the river at Fish and Anchor ford and ferry, which still survives and is a type 24. This meant the two pillboxes at Eckington Bridge were a type 24 and a “Stent”. By a process of elimination, “Stent” was the name of the prefabricated pillbox used in at least one Official document. Mick had discovered perhaps the first “new” identification of a pillbox type in maybe 30 years!

Further research revealed that Stent Pre-cast Concrete Limited was a company extant in the 1930s and 40s who clearly fitted the bill as manufacturers . Indeed Stent had provided concrete railway sleepers to the military and civilian railways. I recently came across a number of these at the Swanage Steam Railway in Dorset, being used to contain a flowerbed! They are marked “STENT” at one end and with the “W^D” symbol at the other. The company was taken over by Balfour Beatty and re-emerged as the Stent piling company of today. Investigations via the current Stent and Balfour Beatty have thus far failed to uncover any surviving records of the original company, who were apparently based in Scotland, though some early records of Stent railway sleepers gives a London address in 1926 (Mr D. Hepburn Stent, 11 Iddesleigh House, Caxton St., Westminster SW1). Perhaps this article will find someone with local contacts!

Accompanying this article is a list of all the sites I know of, including a couple of structures built from pillbox components. A good number have been destroyed and those marked with a star I have seen myself. A number have been destroyed, including the Paulsgrove one just last year. The composite structures are interesting, though their true purpose is a mystery. They do indicate that their builders had access to a significant number of the pillbox kits that were surplus to purely defence requirements. If anyone can add to the list I would be pleased to hear from them and perhaps the updated version could reside on the PSG website with some of the photos. Note that there are some additional sites on the DoB database listed as “prefabricated pillbox”. Those on the Severn are of a different design and the demolished one at Eckington Bridge is actually the LDV pillbox mentioned above. One in Scotland sounds to be Stanton shelter.

Mick Wilks has produced a brand new plan of the Eckington Bridge Stent pillbox for this article (see below). I had long realised there were a few errors in my original plan, but nobody else has commented on them yet! Mick hasn’t included all the internal construction details of the frames, but I suspect few people are that interested. 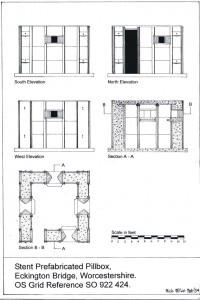 Many thanks to all those who wrote with information on prefabricated pillboxes and their locations. I couldn’t have got this far without you. Particular thanks are due to Mick Wilks for his contributions. Maybe this identification will ring bells with others who have researched War Diaries and local records about other Stent pillboxes elsewhere that have since been destroyed. Perhaps English Heritage will see fit to schedule at least one of the type based on this type review (though apparently one is scheduled as it sits near enough to an Iron Age barrow!) (and the one at Dunstanburgh castle in Northumberland is scheduled with the nearby castle). A prefab would also be ideal for a museum looking to re-erect a pillbox at a new location. The prefabricated panels would be quite easy to dismantle intact and then a new core could be poured at the new location.

From An Article First Published In `Loopholes` Number 32