Why the name Pillbox? 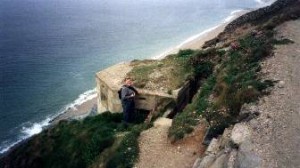 In the last few years there has been a growing interest in the small concrete forts known popularly as Pillboxes. But why are they so called: Why “pillbox”? Why not bunker, blockhouse or Sangar? Two points are raised by this: Who used the term first and why choose “pillbox”?

The Oxford English Dictionary (1) states that the first use of the word pill-box was an article in the Scotsman newspaper dated 13th September 1917. Reference is made to several other later sources such as the Daily Mail for 26th February1923.

In the Scotsman article the first mention of the word is about half way through an article referring to the German use of Bavarian Storm Troopers to capture Inverness Wood, on the Menin Road, at 04:00hrs on the 6th September 1917. This is a typical piece of media reporting of the period, aimed firmly at raising the spirits of the folk back home. It points out that, even though the Germans used hand picked and finely trained Storm Troopers against our `citizen-soldiers` (Sic) (2) they still failed to re-take the wood.

The relevant paragraph in the article reads:

“For some days we have firmly held a line through the western portion of the ragged wood. Although repeated attempts to take the whole of it failed because of its profusion of machine gun forts and other formidable obstacles, the enemy occupants were unable to dislodge us from the portion won nearly a month ago. This joint tenancy was greatly to the enemy`s disadvantage. He tried to send counter-attacking parties out to the ruins of Herenthage Chateau, at the eastern end of the wood (we call it Invernesss Copse, but the German communiques refer to it by its original name, Herenthage Wood), and from the pill-box forts which command it north and south of the Menin Road, but our men beat them back, and endured with grim resolution the constant artillery and machine gun fire poured into their shelters among the shattered trees and flooded shell holes.” (3)

The word pill-box (the word was hyphenated until the Second World War) was used twice more in the article, which is also sprinkled with references to `concrete forts`. this casual use of the word indicates quite clearly that it was not the first time that it had been used by the media. The reader was expected to understand just what was being reffered to. It is clear that the Oxford English Dictionary is incorrect in asserting that the usage of the word pillbox derived from this article. I have not, as yet, found the earlier usage. 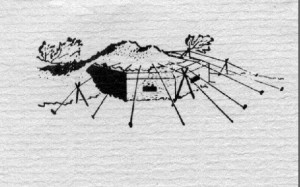 This brings me to the next question. Why “pillbox”?

Almost all published references agree that it was due to the shape. This is where it gets complicated. Soldiers` and Sailors` Words and Phrases (4) states “Pillbox. The name, from the shape (often circular in plan and roughly suggesting a ships conning tower) for the German Ferro-concrete small battlefield-redoubts or forts, employed from the autumn of 1917 onwards to defend sections of the line in Flanders. Some of the larger were Quadragular in shape. They were garrisoned by….”  ; whilst the Dictionary of Slang and Unconventional English (5) prefers “Pill-box. A small concrete fort: late 1917: Military colloquialism by June 1918. the resemblance of their shape to that of an oblong box for holding pills. For the genesis of pill-box see Charles Edmonds, A Subaltern`s War. 1926.”

The Barnhart Dictionary of Etymology (6) on the other hand suggests “Pillbox…1887, Small, round emplacement for housing a machine gun, etc.” with no other attribution as to the reason for the name.

This would seem to establish clearly that the relationship of the shape of the pillbox, square, oblong, polygonal and round, is related to the small containers used to carry medicinal pills. However, the connection between the term pill-box and the word `fort` should be noted. A fort may be either a place of resistance, capable of defence or simply a bomb proof barrack, with no real defensive capabilities.

One last piece of information appeared during the research for this article. it has long been assumed that the first official (i.e. War Office) use of the word pillbox was in an engineering manual published by the War Office in 1925. However, according to The Etymological Dictionary of Modern English (7) the term Pillbox was used repeatedly in an account of award of a V.C. Nov 27 1917. (“Pill-box. Small concrete fort, occurs repeatedly in official account of award of VC Nov.27 1917”.) 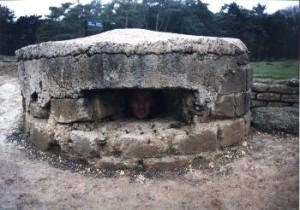 First World War “Pill-box” on the Canadian side of the trenches at Vimy Ridge, France

In the introduction the author states that this book was started during 1918, before the end of the war. It is well written and detailed account of his activities both in and behind the lines. his description of a pill-box is as follows: “This pill-box was the only piece of good cover in the whole battalion area. Imagine a small room ten feet square and six feet high with walls of thick rough concrete. there is only one opening, the door, over which a waterproof sheet is draped”. (8)

A little later in the same chapter he gives a brief description of the rise of the German pillbox in the First World War: “Pill-boxes had begun by being concrete cellars in farm houses; they grew gradually into keeps of reinforced concrete in the midst of the wreckage of ruined houses; in the third stage the ruins were scattered by shell-fire and the square boxes of concrete were left standing alone.” (9)

This would seem to indicate that the first German pill-boxes were in fact infantry dugouts made from concrete, with no defensive capability of their own, and thus dependent on the surrounding trench system. to some extent this is borne out by a survey carried out by Captain B T Wilson (10) for the RE School of Instruction. He refers to both concrete forts and pill-boxes with seemingly the same meaning. It is clear from this report and the Scotsman article that there was considerable confusion in the minds of everyone on just what was a pill-box and what was not. the term is used equally for a concrete, bomb proof shelter and a small, defensible structure mounting small arms or heavy machine guns.

It is, of course, the latter that has been taken into the English language.

2. The use of the term `citizen soldier` is in itself an interesting one. It is strenuously denied by both the Ministry of Defence and the Government, smacking as it does of extremism.