The city of La Coruna is situated on the north west coat of Spain, about 45km from Ferrol (north) and 70km from Santiago de Compostela (south).

The base was opened in the 1920`s and built by the Spanish Army on top of Monte de San Pedro to defend any possible invasion in the Bay of La Coruna, the river of Betanzos and most important of all, the river of Ares & Ferrol, where a similar bunker still exists. 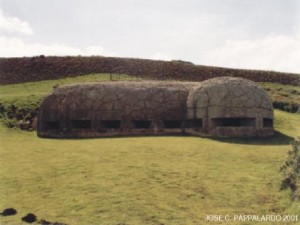 This structure is standing about 100m in front of the East Coastal Battery and is in fact a coastal watch position. It still has a circular space on the right side of the roof for a `flak` position. This space is connected by a shaft with metal steps (now destroyed) to the main structure. There are perimeter passages, one interior room and another 12m long shaft that leads down below to a tunnel dug out of the rock. This tunnel leads to the other side of the mountain as a means of escape if the position was over-run in an invasion.

Jose Pappalardo has explored, photographed and documented many of the defence structures in this area of Spain and is currently putting the final touches to his website which is due to be published next month. The PSG Website will be linking to it as soon as it goes on-line.