A few months ago I decided that a day at the seaside would be a great idea. I had’nt been to the Porthmadog part of Wales for about 20 years and so I had no idea that I was to find a Camouflaged Pillbox just around the corner from the little bay at Borth-y-Gest. 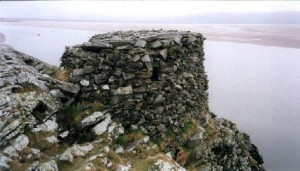 The Pillbox itself is a ‘one-off’ design perched right on the edge of a small rocky outcrop immediately above the deep water channel of the ‘Afon Glaslyn’ as it runs into Porthmadog. It not only has total command of the channel but also of Traeth Bach Sands out to about 3km distance. Nothing can move in or out without being spotted!

The Pillbox itself has been blocked up and so, apart from sticking your head through the top of the doorway, it is impossible to get inside. However, it is about 20ft long and about 8ft wide. Reasonably rectangular shape inside but has tapered ends. Inside it is constructed of concrete blocks but faced with local stone to give it a really menacing appearance.