It is by no accident that the majority of defence structures are located where they are. With the emergency evacuation of the BEF from the beaches of Dunkirk there was an obvious and urgent need to build defences against the threat of Nazi Invasion.

The result was the construction of Stop – Lines, consisting of man made objects located to enhance the natural ‘lay of the land’.

The basic concept was detailed in a Southern Command memo dated 22nd June 1940 (public Records Office WO 199/1800) covering the construction of GHQ Zones, which stated:

“The immediate object is to divide England into several small fields surrounded by a hedge of anti-tank obstacles which is strong defensively, using natural accidents of the ground where possible. Should Armoured Fighting Vehicles attack or airborne attacks break into the enclosures the policy will be to close the gate by blocking the crossing over the obstacles and to let the ‘dogs’ in the shape of armoured formations, or other troops, to round up the cattle”

This indicates that the stop-lines were constructed to block the progress of German armoured columns, setting them up for a counter attack by our defending forces. A Stop-Line would be a continuous anti-tank obstacle, natural if possible, covered by Pillboxes and other prepared positions.

On 25th June 1940, General Paget, Chief of Staff to the Commander-in-Chief Home Forces submitted General Ironside`s anti-invasion plan to the War Cabinet in the form of Home Forces Operation Instruction No.3.

SECTION 13 of the Instruction stated: “The general plan of defence is a combination of mobile columns and static defences by means of strong-points and stops. As static defence only provides limited protection of the most vulnerable points, it must be supplemented by the action of mobile columns. However mobile such columns may be they cannot be expected to operate immediately over the whole area in which it is possible for the enemy to attempt invasion by sea or air. It is therefore necessary to adopt measures for confining his actions until such time as mobile columns can arrive to deal with him. This will be done by means of stops and strong-points prepared for all round defence at aerodromes which are necessary to prevent the enemy obtaining air superiority, at the main centres of communications and distributed in depth over a wide area covering London and the centres of production and supply. This system of stops and strong-points will prevent the enemy from running riot and tearing the guts out of the country as had happend in France and Belgium.” 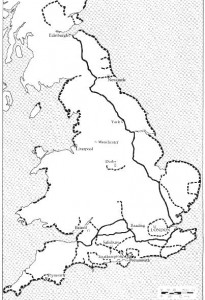