There are relics of fortification along the beaches either side of Napier, New Zealand.

In addition, there was a Coastal Defence Artillery Battery on Bluff Hill, overlooking the Port of Napier.

A little research showed that 77 Battery of the 10th Heavy (Coast) Regiment were stationed on Bluff Hill, with this unit being mobilised in early 1940, and stood down at the end of 1944.

The Battery consisted of a pair of 6″ Mk VII Naval Guns, and 4 Mobile 40mm Bofors units for air defence. Of these there are no longer any visible remains, as the 6″ Emplacements were demolished in the late 1970’s.

A scenic Look-out has been built on the foundations of the old emplacements (the magazines may still exist below, but are sealed.) This Look-out was dedicated to the various Artillery Units that have served on Bluff Hill since the mid-1850’s.

The Pillboxes were ranged along the beaches north and south of the Port of Napier. As a child they always fascinated me, but I was never allowed to enter them, as they were often used as toilets by the more unsavoury elements of our troubled society. However, I can remember that there were probably 6-8 scattered along the beach to the south (about 1500 – 2000yds apart,) up to the edge of the city. The first was a distance of about 3 miles from the Port, the last being at the mouth of the Tutaekuri River. To the north, there were approximately the same number, starting from the mouth of the Ahuriri Estuary, to the township of Bay View. Most were of the type shown in the attached photographs, though some were of a simpler design, with an MG Embrasure at each end, and 3 rifle loops along each side. To my knowledge, there are none of this other type remaining at Napier. 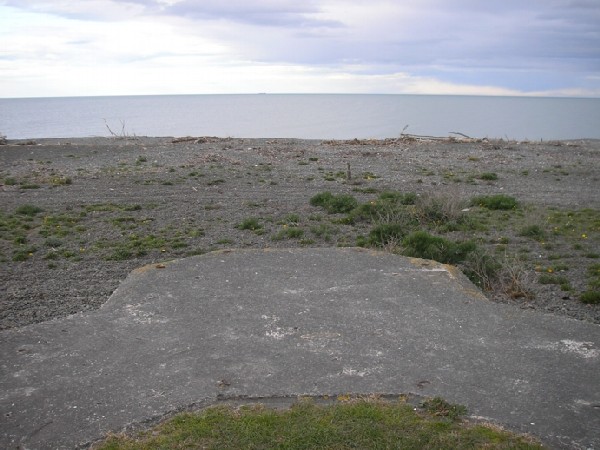 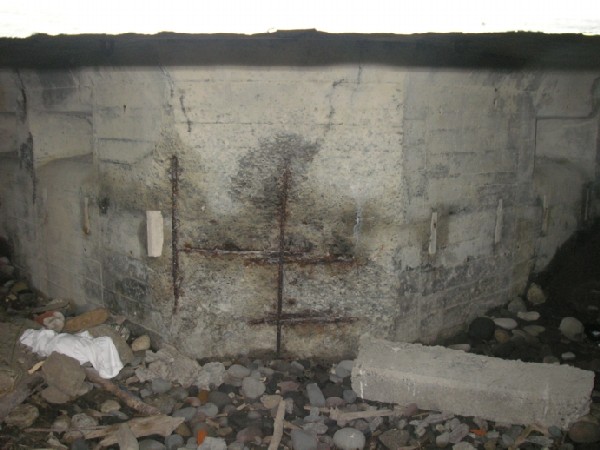 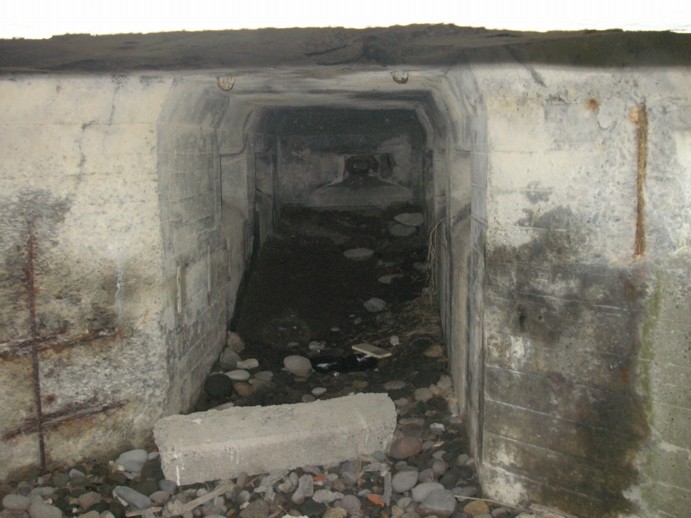 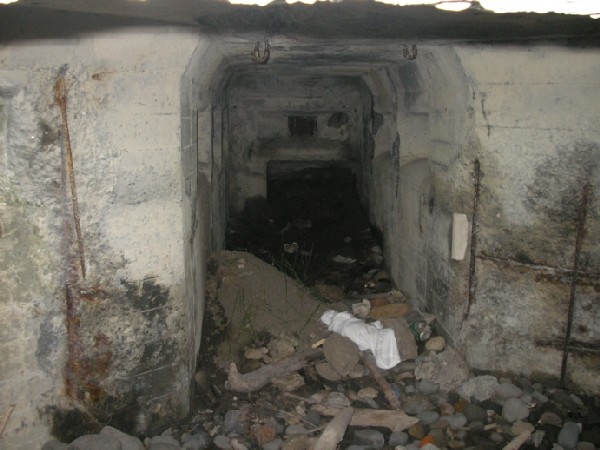 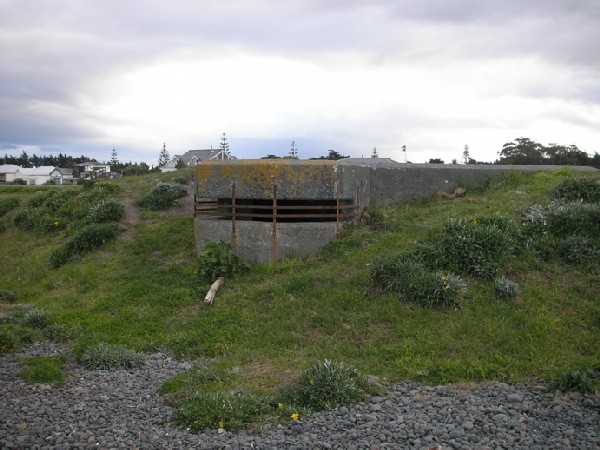 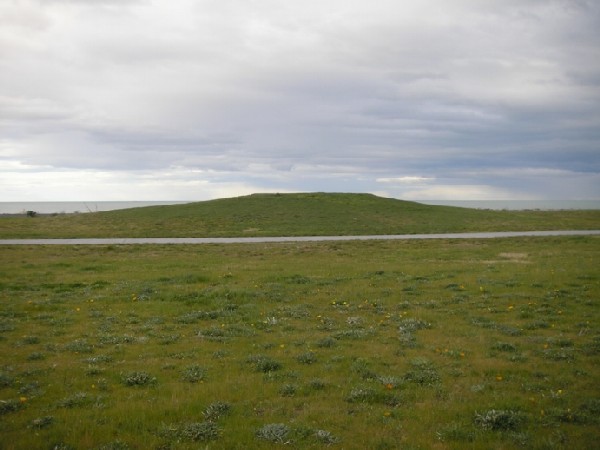 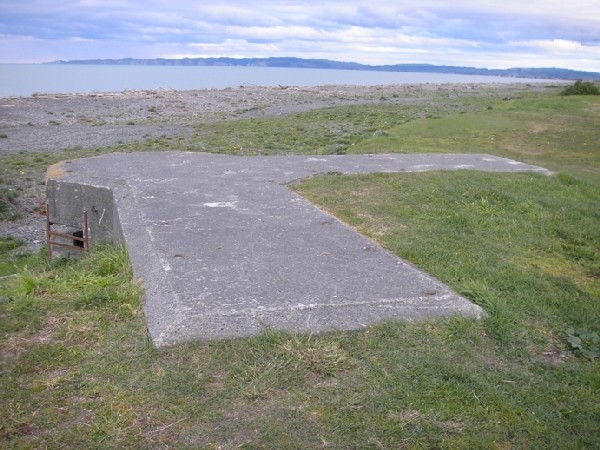 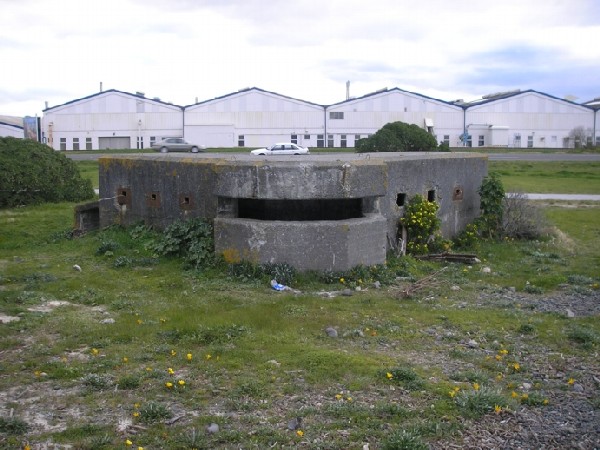 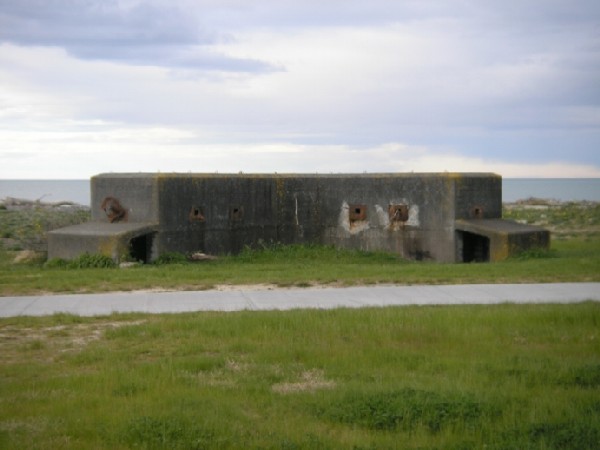 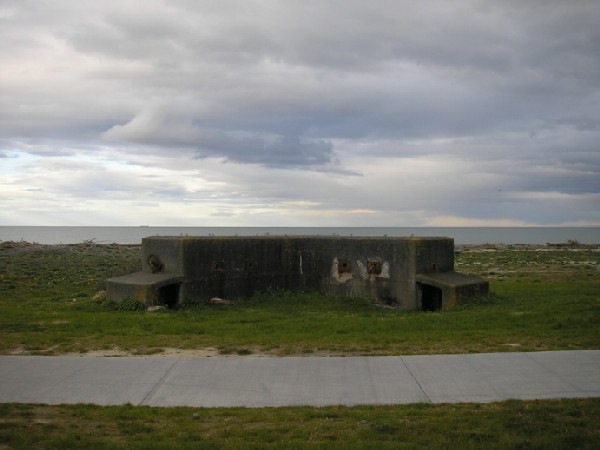 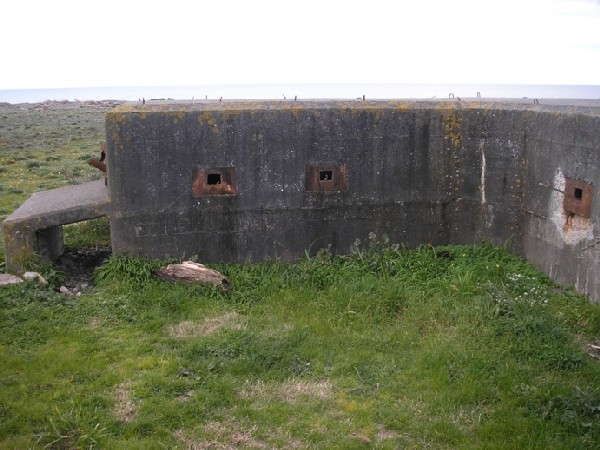 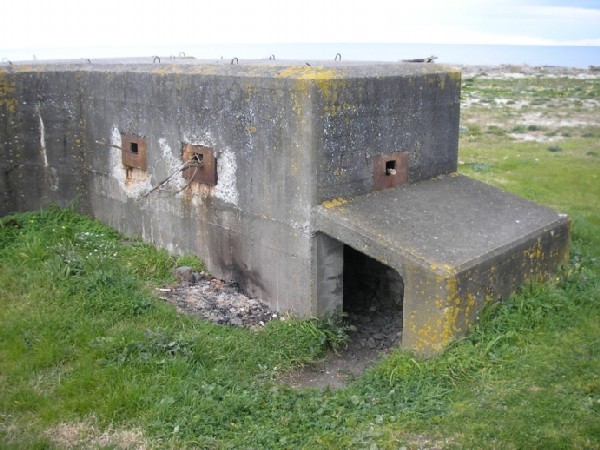 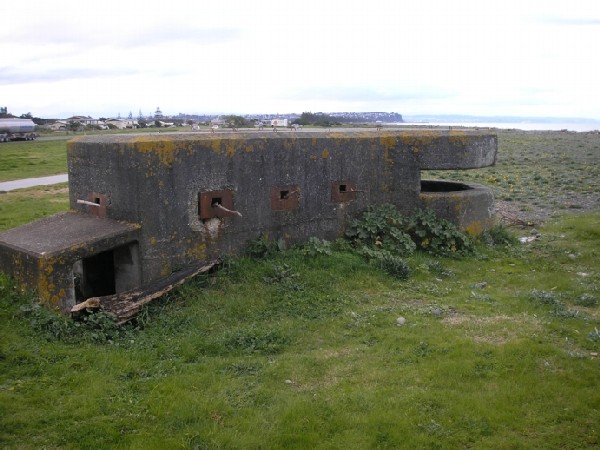 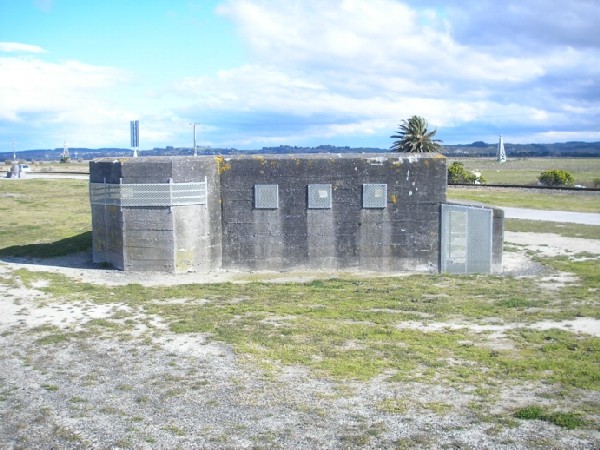 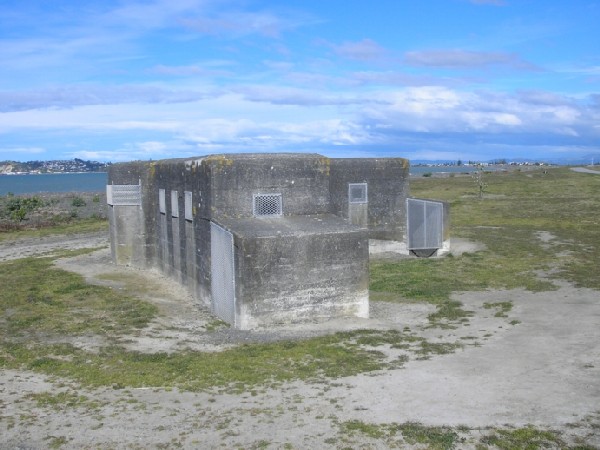 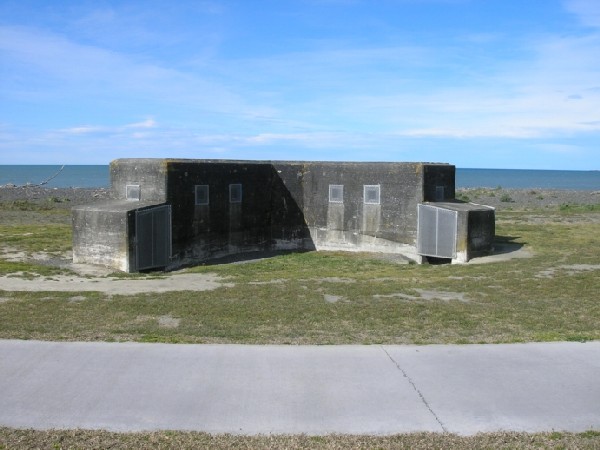 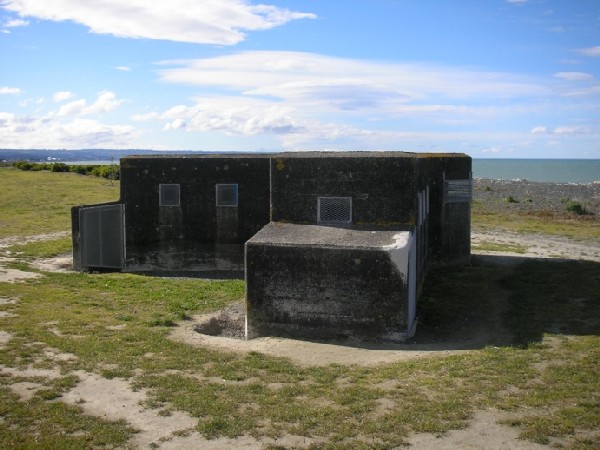 Those of the pillboxes that I could see inside were in varying states of repair. The Westshore Pillbox was well preserved, and has been closed up to prevent vandalism. It is very clean inside, though only marks on the walls show where the shelves were. How the Machine Guns were mounted is a mystery, as there was no evidence of any bench/shelf for this purpose in any of the boxes visited. You will also note that there is no dividing “Anti-ricochet” wall in any of these pillboxes. You will also not that the Rifle loops are not “stepped” on the exterior, as in the British ones. I saw that all were stepped on the inside, to allow the rifles a better arc of fire. Some Rifle Loops were just concrete, others were steel-faced. When I was a small child, many of the pillboxes still retained their small heavy wooden doors in their protected entrances.

Awatoto 1 was all but buried, with only the MG Embrasure showing, whilst Awatoto 2 was clear and in the open. Awatoto 2 has suffered a good deal of vandalism, but is still reasonably strong.

The Napier City Council moved to have all of the old pillboxes demolished years ago, and one or two were destroyed with great effort. I recall that explosives caused damage, but that to demolish all would have been expensive. It was the decided to bury the ones closer to the city. There a about 5 buried pillboxes on the Napier beaches.

I have seen nothing similar to our pillboxes on your pages, so I assume that these were a peculiarly New Zealand design. I have no idea what their designation was. I have hunted about a bit through the New Zealand Military Archives, but have not been able to find any literature referring to the Napier Pillboxes.

However, I have recently discovered that there were other New Zealand ports defended by such pillboxes as we have in Napier, with similar ones covering the port of Wanganui, on the west coast of the North Island. The ones I saw were of the type I originally photographed for you. They appear to have been constructed around the same time as the Napier ones. Bearing in mind that there were 6″ Naval Guns on Kaiti Hill, overlooking the port of Gisborne, I would assume that these pillboxes were once a ubiquitous feature of our ports. As you will appreciate, we were far from the War in general, so we were nowhere near as heavily fortified as Great Britain at that time. Neither did we have the resources to defend such a large coastline. Our ports were fortified to protect shipping, as we were heavily committed to supplying food aid to “Mother England.”

I am sure that with further research, more light will be shed on the remnant fortifications of the farthest flung corner of the British Empire. I will supply all that I can find, as I share your belief that it should be shared before it is lost.

This is the layout of the other type of Pillbox on the Napier Beaches. 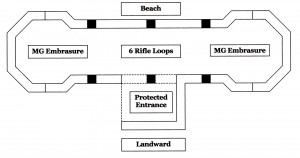 There are none remaining that I know of, hence the diagram. They were double-ended, probably to facilitate enfilading fire along the beaches.

In addition, the Rifle Lops would have provided defence for the otherwise blind seaward side.

The protected entrance was also defended by 3 Rifle Loops, and originally, there would have been a stout wooden door to close the small porch.

Some of the pillboxes still had these in the early 1970’s.

The top of the Pillbox, as with all the others, had protruding hooks. Presumably these were for the attachment of camouflage netting.

The insides of the MG Embrasures also sported large metal lugs, possibly to hold armour plate or shutters of some kind.

My latest information suggests that the chain of Pillboxes were constructed in reply to the threat posed by Japan entering the war, as they were completed in early 1942.