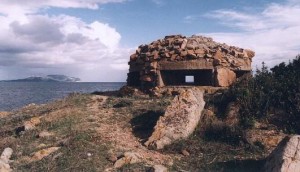 During summer 2001 a new study group called “A.S.S. Fort Sardegna” has been created in Cagliari. It is a cultural association which aims are to promote, realize and participate in initiatives to study and safeguard wartime (1940-1943) heritage in the Sardinia insula.

To promote the research, knowledge and study of the wartime defensive systems ( like fortifications, observation posts, artillery positions, road strongholds, airfields). Some of these are also inserted today in a worldwide beautiful tourist landscapes.

To promote the creation of a permanent museum (“Wartime memorial”) able to remind to people the Sardinian war-scenario during 1940-43 years.

Today the “Fortress Europe” sites are involved in cultural and tourist projects. We hope that also in Sardinia will be possible.

Sicily, Sardinia, Elba and Pelagie Islands (Pantelleria; Lampedusa) were the most Italy coastal fortified regions during the war 1940-1943.

The fortified insula of Sardinia was also called by propaganda “Mediterranean sea aircraft-carrier” and “Fatherland rampart”.

Until summer 1943 Sardinia was a possible target for an Allied military invasion (“Brimstone” plan) and was heavily bombed. After the war Cagliari – the Sardinian administrative centre – received the gold medal for wartime suffering.

Before of the war only the Royal Navy (the Regia Marina) and fascist Milizia Volontaria Sicurezza Nazionale had batteries near Cagliari, Sant’Antioco, Alghero, Olbia and most in Navy Military Place La Maddalena (“Piazza Marittima Militare La Maddalena”). A lot of Airports served to Italian Air Force and German Luftwaffe.

On summer 1942, the Sardinian plan of defensive works (made by 5^ Armata in Florence and XIII° Corpo d’Armata in Cagliari) counted 40 sites of road strong-points, 8 stop-lines or “archi di contenimento” (a very fortified line beyond coast) and others defensive works on the coast perimeter of Island.

On December 1942 the “works situation” in Sardinia counted 458 finished, 378 half-finished or begun bunker. Others 575 bunker were on plan. At this project worked civilian enterprises, but also military forces. 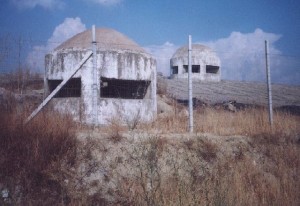