Findhorn is located on the Moray Firth and is the next settlement to the west of Roseisle. The sandy beaches and easy access inland from same made this area a potentially attractive invasion area. It was therefore heavily fortified. 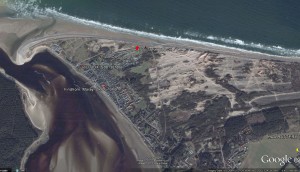 AT Cube line at Findhorn

The whole of the peninsular on which the village stands is subject to heavy erosion and shifting of the sands which has in the past necessitated a move of the whole village to it’s present site. This shifting is still happening as can be seen from the position of the line of pillboxes and anti tank cubes which is now, for a substantial part of it’s length, below the high tide line.

The pillboxes here are of a type hardly seen elsewhere and most closely resemble the Northumberland D type but with a door on the side (only seen in Northumberland where the D type is built against a wall, blocking the normal rear exit). If you follow the line of pillboxes North East towards Roseisle they change in type to the type 24 machine gun pillboxes as shown on the Roseisle page.

The Anti-tank cubes at Findhorn are the full 5ft Cubes and there is a double line of them which, at one time, completely crossed the peninsular. There is a transition in the line from the cubes having the flat face forwards to diagonal placement – apparently this required less concrete for the same defensive coverage. Unfortunately there is no original graffiti on these cubes, unlike the ones at Roseisle and elsewhere on the Moray Firth. 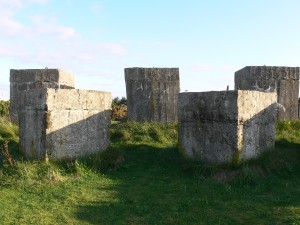