Study & ‘Makeover’ Of A Shellproof Pillbox 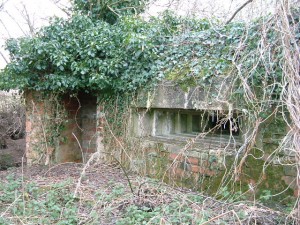 The pillbox is on private land near to the GHQ line at Crookham in Hampshire and is one of only two of this design.During January 2006 the landowner very kindly allowed me to carry out a study and survey of the unusual defence, this involved the complete removal of  undergrowth which had hidden most of it from view for many years. 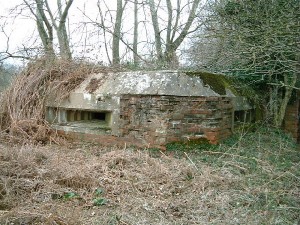 This example is dug in to the field and has a step down protected  entrance on a south east facing corner, the pillbox would have provided enfilading fire across and along an anti-tank ditch that previously ran from the canal across the facing field before passing this emplacement. 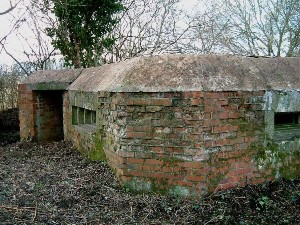 The defence was constructed to shellproof specification and has walls that are 51″ thick, all of the roof edges are chamfered as protection to deflect in coming fire. 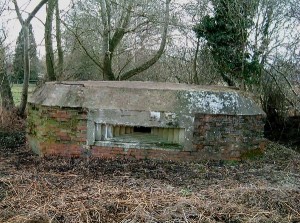 The emplacement features four huge cast embrasures which give an exceptionally wide angle of fire. one of the loopholes still has an original flameproof flap.

The interior is cramped and  divided by an X shaped central blast wall,  inside the pillbox is flooded  nearly a foot deep. 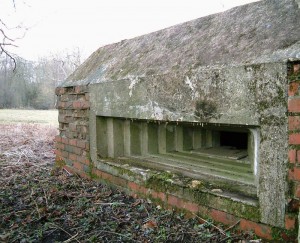 Two published books have described the pillbox as a Vickers MMG emplacement this is incorrect, the pillbox was not built for a Vickers gun but has provision for a Bren gun tripod like the rest of the defences in this area.

I had been told by the owner of the other surviving example that the gun used during drill was a Lewis, during 1940/41 he had crewed the pillbox with men from his unit.

A full report with much more detail and scale drawing appears in the PSG Loopholes magazine.

Please note this pillbox is on PRIVATE property and permission must be sought to view. 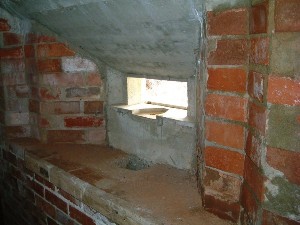