A Walk Along Chesil Beach

NGR: SY5665984083 & SY5666484097 During August 2006 I was kindly given a tour of some of the remaining defences in Dorset by Graham Matthews our PSG Web-master. Visiting Chesil beach at Abbotsbury was on the route and proved to be a most interesting visit. I had an idea of what to expect to see after reading about this defence area in `Beaches, Fields, Streets and Hills` by William Foot. After parking the car at the beach car park near the Abbotsbury Tropical Gardens we made quite a long and arduous walk over the vast pebble beach, finally reaching the well preserved and most impressive anti tank wall. This is made up of a double line of cubes running from the top of the beach down an incline to an inland area of brackish water known as the Fleet. The Fleet is a main part of the famous swannery at Abbotsbury and is bordered by deep reed beds. 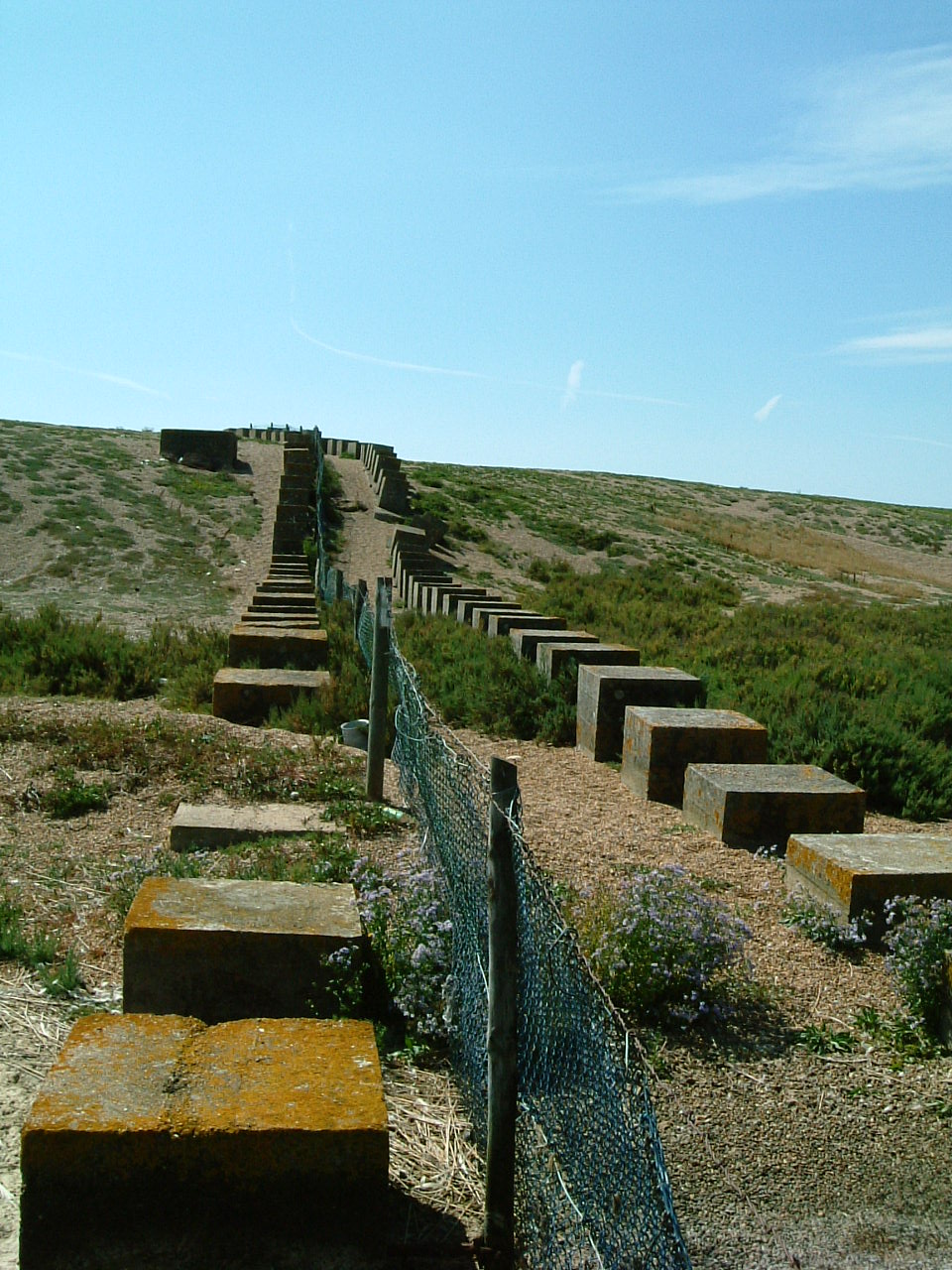 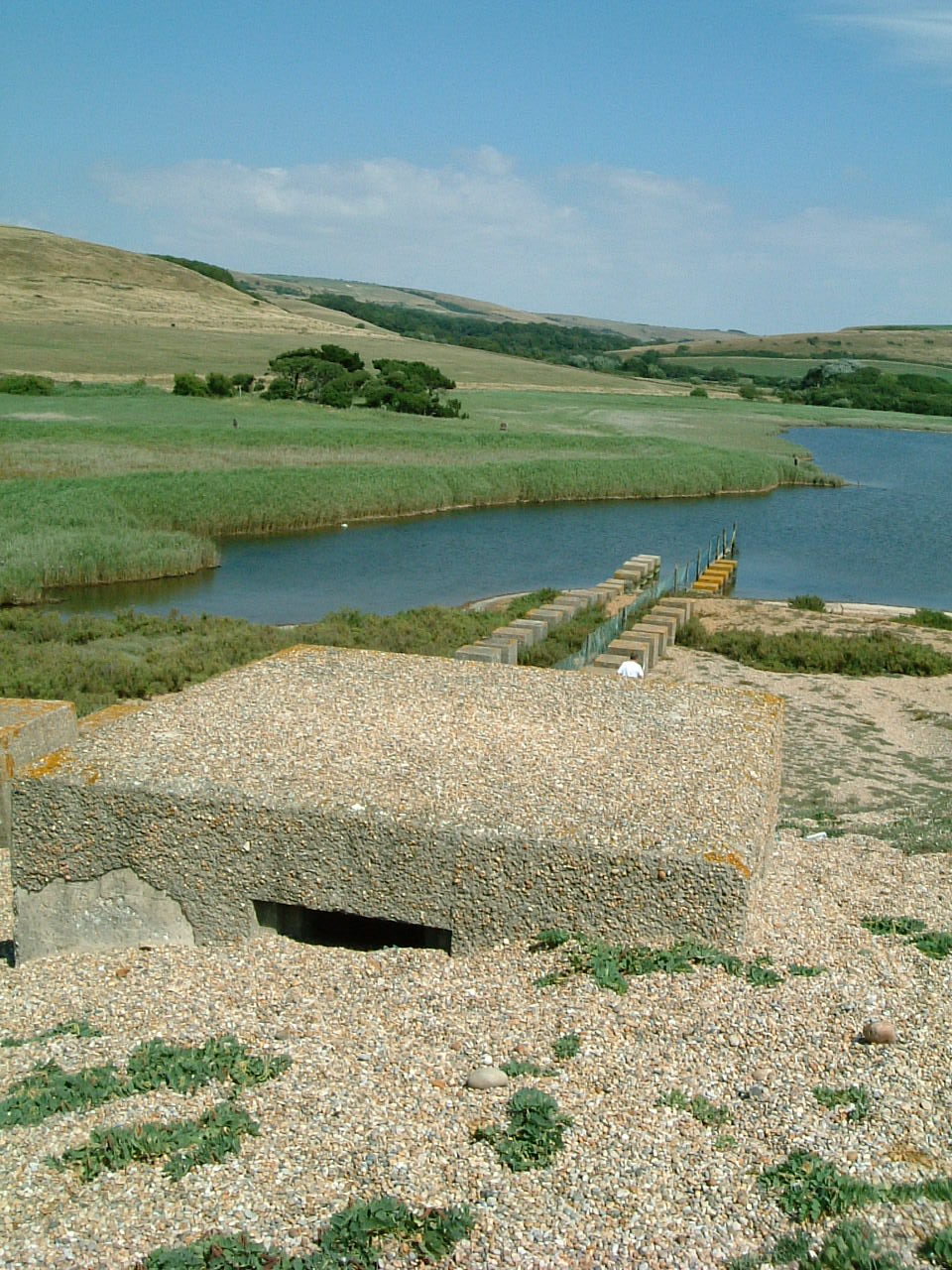 Adjacent to the east side of the cubes is a partially dug in Type 26 pillbox. 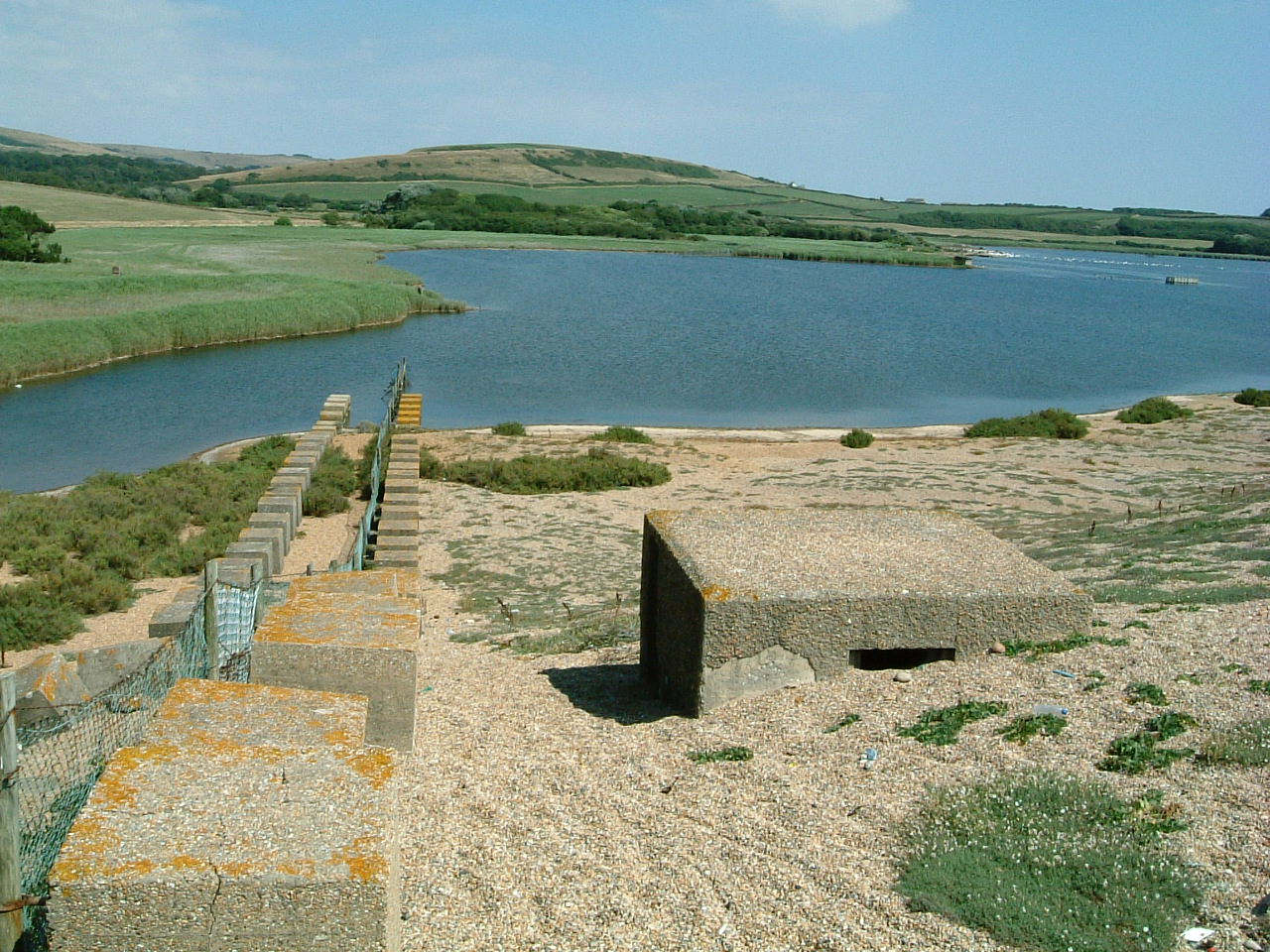 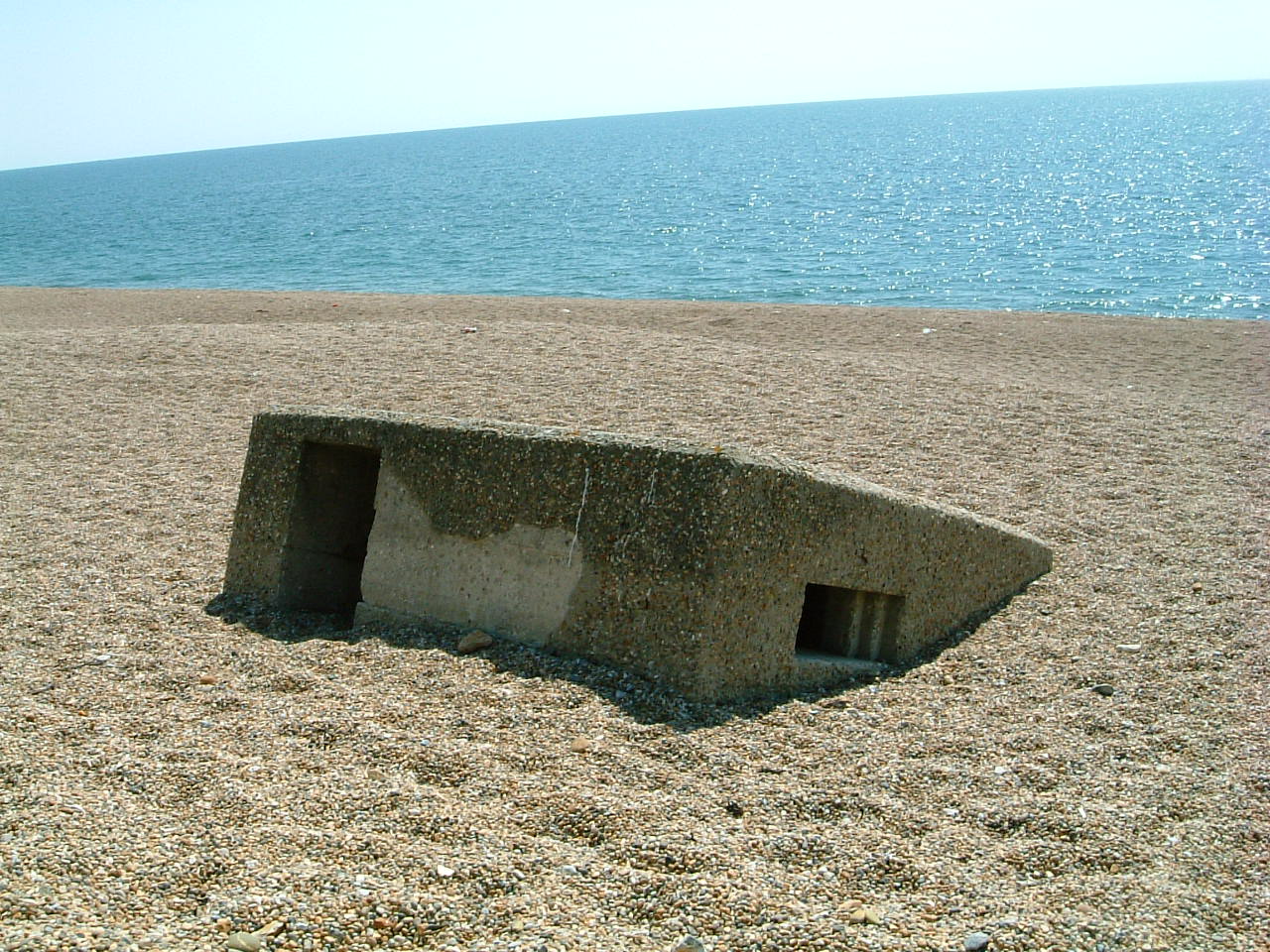 This sad survivor is now heavily subsided and leaning at an angle filled completely with pebbles.

These pillboxes were thoughtfully camouflaged to suit their surroundings, both having the out sides covered in a sandy pebble dash finish. A significant and interesting find only yards west from the anti tank cubes, and just over the apex of the top of the beach was what appeared to be two square open concrete boxes. 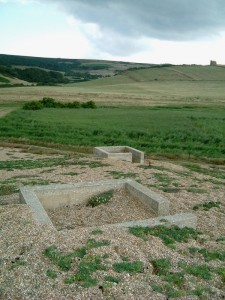 These were located approx 240 yards west of the anti tank cubes. Both are spaced approx 15 feet apart, with one being at a higher position. Closer examination showed that both structures have an entrance cut out which is offset to one side. 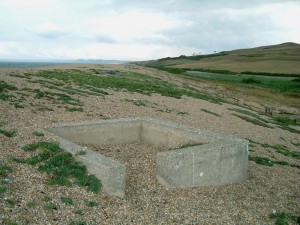 The box nearest the sea (SY5665984083) is completely filled with stones, but its shape and uppermost section is clearly definable. The entrance side to this, the higher placed defence, faces 085 degrees east. 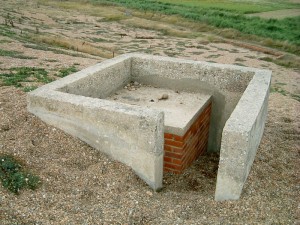 The more visible and accessible one of the pair (SY5666484097) has its access point facing south at 178 degrees. This emplacement features a brick built table, on top of which is a 4″ layer of concrete. In design and measurement it appears to be very similar to a Vickers machine gun table/platform as found in a standard VMG Pillbox. Unsure of what we had come across, I decided to return to the site again to do an accurate recording exercise to see if I could uncover any further details of these unusual survivors. Whilst my wife and children were busy collecting shells I spent some time measuring and photographing the gun emplacements. Taking a second look at these I realised that the weapon table had the remains of rusting angle iron sticking from it, in a pattern that indicates its structure most probably supported the heavy machine gun tripod. 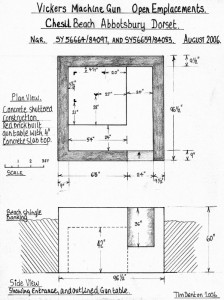 From my scale drawing you can see the measurements taken from the surviving rusty metalwork. After a brief amount of excavation I found that the pit has an overall height of 5ft, with a concrete floor. Each of the four external walls measure at just over 8ft in length, and are approx 9 inches thick. The entrance cut out measures 2ft wide by 3ft deep. All of the walls have a concrete shuttered finish inside and out After showing a friend the results of my findings he kindly produced an illustration taken from a British Army field manual dated 1925, this shows a clear similarity to these defences.

The drawing shows that the sides of the emplacement would have been built up with banking, for these two examples no doubt pebbles and sand from the beach would have been used. Although both gun pits are hidden from the sea by the top brow of the beach, I am sure the crews would have still felt very vulnerable and apprehensive should an invasion taken place. The top of the emplacements would most likely to have been camouflaged with netting to conceal them both from the air. The netting would have probably had some support from props in, or outside of the defence. The positions of both machine gun posts would have enabled the crews to enfilade, and converge fire from the anti tank barrier and pillboxes, firing west along the beach to the direction of the exit road leading uphill to Abbotsbury village. The position of these emplacements would have given a clear view to fire on troops should troops gained ground inland past the shoreline. Neither of these two survivors is recorded on the Defence of Britain database and no mention of them is made in the latest publications on this subject. 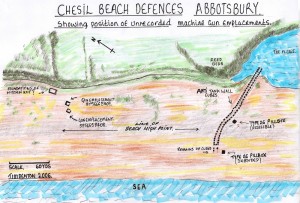