A Rather Unusual Pillbox

If you turn onto the Great Yarmouth sea front and head south after about 1 mile you come to the end of the holiday part of Yarmouth and head into an industrial part that is connected with the docks and known as the South Denes.

About a mile on from Great Yarmouth’s pleasure beach you will see two old single story buildings next to the side of the road these are in a very run-down and vandalised condition a few hundred yards further on and set nearer the beach is a large brick shed.

This believe it or not is all that remains of a WWI Naval Sea & Land Plane Station OS: TG 53345.

Opened in 1913 the sea plane station was built to protect this part of the east coast from attacks by Zeppelins and for spotting German surface raiders, the first Zeppelin to be destroyed by a machine from Yarmouth was on 27th November 1916 this being the L21 which was set on fire and fell into the sea off Lowestoft.

At its hight the air-station had over 30 machines based there and played an important role in submarine detection and airship destruction.

After the end of the war the station was run down until the final equipment was removed in 1920 and the station closed. 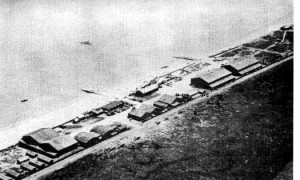 The first photo is an an aerial view of the air-station taken in 1918. At the bottom left of this photo you will see five small buildings in a row. It is the right most two of these that are still standing today, At a point almost in the middle of the photo you can see a large single hip-roofed shed running along the sea wall (just to the right of the first slip way). This is the old repair shed and is the main subject of this article. Note as well, the two slip ways for launching sea planes into the sea and on the grass across the road from the hangars the several land planes lined up.

By the start of WWII only three buildings remained. The two smaller ex-admin buildings appear to have served no purpose in the defence of Yarmouth but, no doubt due to its position on the sea wall the repair shed was taken in hand and converted in to a strong point. The nature of which I will attempt to describe as accurately as I can. 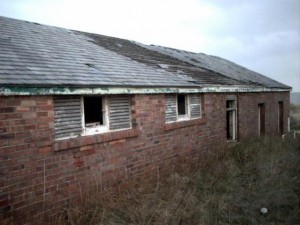 The building is a large open plan building with only two sub-rooms at the north end. It seems that when the work was carried out the workers almost built pillboxes within the original building. At the north end, cut into the brick work, are Eight slits with concrete lintels over (these were bricked up post war when the building reverted to a peace time role as a store room). At the front and front side of the north end are two apertures set lower than the others and inside there seems to be some sort of fixed mountings on these two only.

The aperture on the front northern end is the only one that fires out to sea, the others fire up and down the beach. However, it is not until you enter the building that you see just how much work was done, although most of the internal walls have been knocked down. Up against the original brick walls are the concrete walls that look like the internal walls of any other pillbox or bunker with firing loop holes etc. I would guess that the other walls were removed post war and you can now only see the limit to where they were cut back. 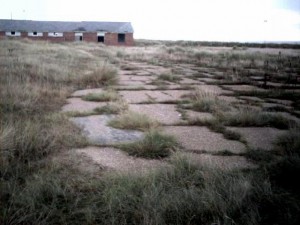 The photo above is the base of a hanger. All the hanger bases can be seen except for the ones south of the repair shed as this is now a lorry park and has been resurfaced

Here are three views outside the building: 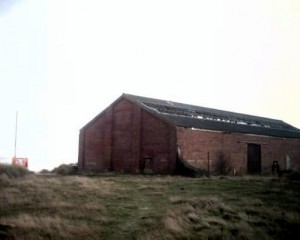 The first is looking south-east towards the sea. In this you can see the main door on the land side of the building shown on plan (to follow). 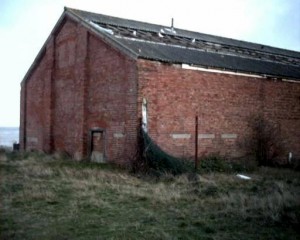 The second is taken from the sea wall looking south in this view you can make out the two loopholes that have mountings fixed inside. 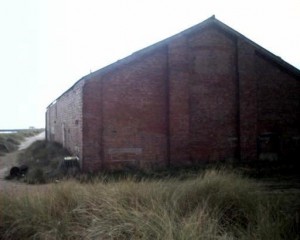 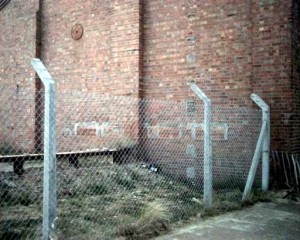 In this first view is the south east corner looking north west you can just make out the concrete over the four bricked up rifle apertures. The wire fence surrounds a lorry park. 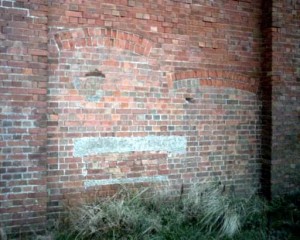 The next photo is a close up of one of the “machine gun” apertures on the north east corner of the building. 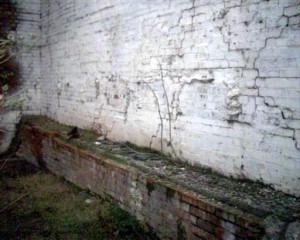 The last view is in the south east corner of the building showing the four apertures facing south (you can just make out the rough plaster where they have been bricked up. The Inner wall at this point has been cut right down. 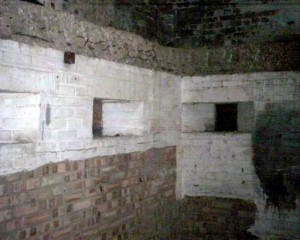 In the first two view in this mail we are inside the north west corner of the building looking at the rifle apertures. Note that you can see where the roof has been cut back showing the thickness of the concrete. 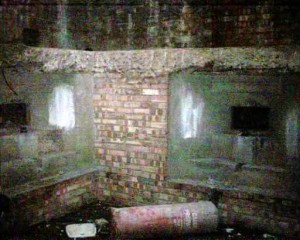 The next two show the two “machine gun apertures on the north east corner one a close up showing the pintel mounting again. You can see where post war the roof has been cut back. 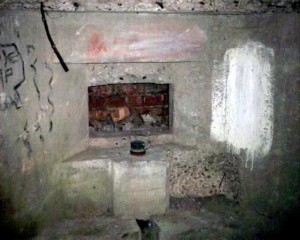 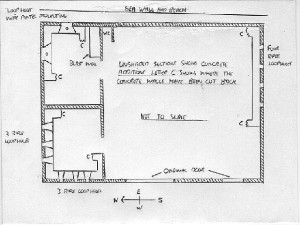 The original walls are shaded and the concrete additions are plain. As you can see, after the war most of the internal wall were removed to enable the building to be used again for other purposes. However, looking at the blast wall in the north east corner room you can see that at one time the walls and roof totally enclosed the “bunkers”.

I don’t know what the mounting are in this room maybe you do?

The building is now in a very poor condition having now been disused for about 30 years. Despite calls in the local press for some sort of effort to be made to restore the buildings there future is unclear. There is a proposed harbour expansion plan which will swallow up all this land.