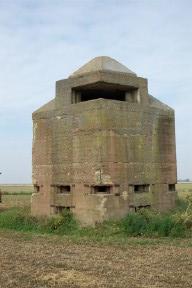 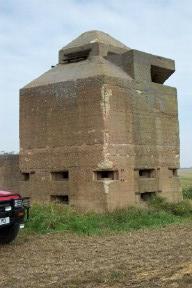 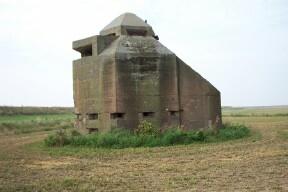 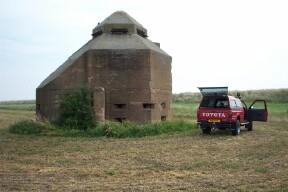 The function of EXDO (or, equally valid for this context. XDO) in the Royal Navy dates from April 3rd 1914 when the duty of so called `submarine mining` passed from the R.E.s to the R.N.

The first such unit to transfer and be joined (i.e. re-badged) into the Royal Marines was the Northumberland Electrical Engineers (Volunteers) R.E.T.A. who thus became the No.1 Tyne-Tees Submarine Miners (R.M.). They were soon followed by the London (N0.2) and thus these two units supplied cadres which in turn became further units until by mid-1915 there were twelve within the R.M. These little-known technical troops within the R.M. had three successes during W.W.1 with two U-boats sunk in 1917 in Scapa Flow (including WB116) and one off Hayling Island in 1918.

These units required shore bases, including control posts etc. Some of these structures survived long enough to be re-used during W.W.2 but these 1914-18 survivors were very much the exception as the requirements from 1940 onwards were of far greater urgency and scale in numbers.

By W.W.2 the role of the EXDO (i.e. EXtended Defence Officer) had altered to include the following duties:

1. Close inshore and harbour ground minefield operations but not deep-sea or offshore beyond one mile (1.6km) from the shoreline.

3. Listening with hydrophones for enemy submarines close to the shore.

5. Local defence of above installations if the Army or R.M. were not available.

7. To be local Naval Adviser to such other military units that were in the vicinity, e.g. coast defence batteries, heavy A.A. units, Aerodromes etc.

It will be seen from this list, derived from Standing Orders of three posts (in Orkney, Hamble and Larne) that the existing buildings were no longer suitable and a new design was needed.

In larger ports the C.O. was of Lieutenant-Commander rank, in smaller ports a Lieutenant, but in some minor ports a long-serving Warrant Officer would command. That said, the subsidiary posts (see below) were commanded by either a Boatswain or R.M. Sergeant Major.

1.Those incorporated into a much larger building, e.g. Port War Signal Station or Harbour Entrance Command, or else within large Battery Observation and Command Posts, e.g. the fine example at Ness Battery, Stromness, Orkney or those within the command complexes of Bull Sand Fort, Horse Sand Fort etc. 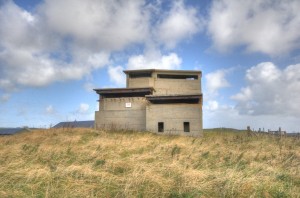 2. Those that re-used some of the W.W.1 survivors, e.g. Shetland; Fort Hoxa, Orkney; Nigg on the Black Isle, Invergordon; Chapel Bay Battery, Milford Haven and Fort Blockhouse, Gosport. A note of caution on this last structure, which still stands today – it may even have been a re-used Victorian one as this fort (now H.M.S. Dolphin) had been used in the 1880s through to 1910 or so by the R.E. Submarine Miners (see photographs in Navy and Army Illustrated of 1899).

3. Those purpose-built W.W.2. These can be divided Into two groups: those built from the Munich Crisis (1938) through to May 1940, and those built after Dunkirk (i.e. June 1940 onward). The latter can be further subdivided into those close to then-existing defences but which would, because of their siting, be exposed to probable close-quarter action in the event of Invasion; those standing alone on exposed shorelines etc.; and those which were sited within defended perimeters and thus did not have to possess self-defensive aspects.

The factors which dictated the design for the majority of EXDO Posts were:

a) A position of good natural visibility and so a design which gave a maximum overview of the sea, harbour, river, loch etc. under control,

b) Enough room for the manning unit to function efficiently, and

c) In most cases the ability to be self-defensive if necessary. 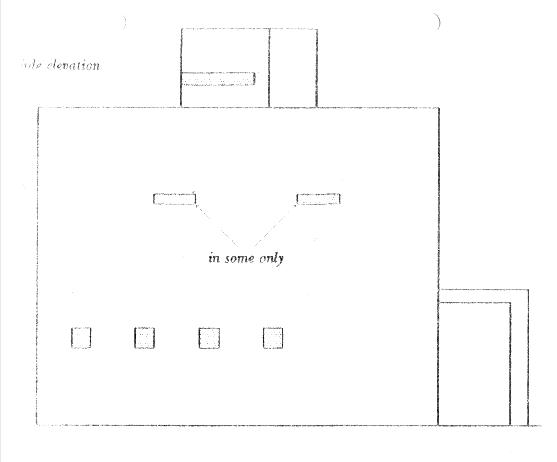 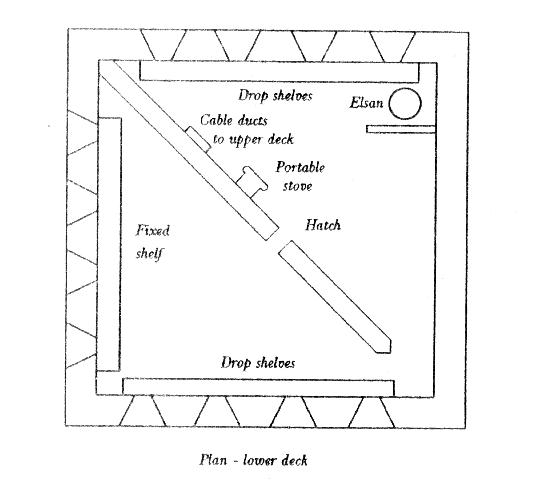 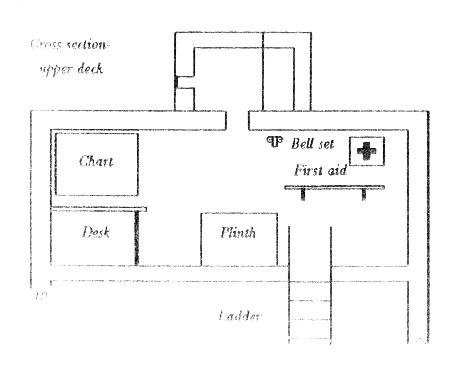 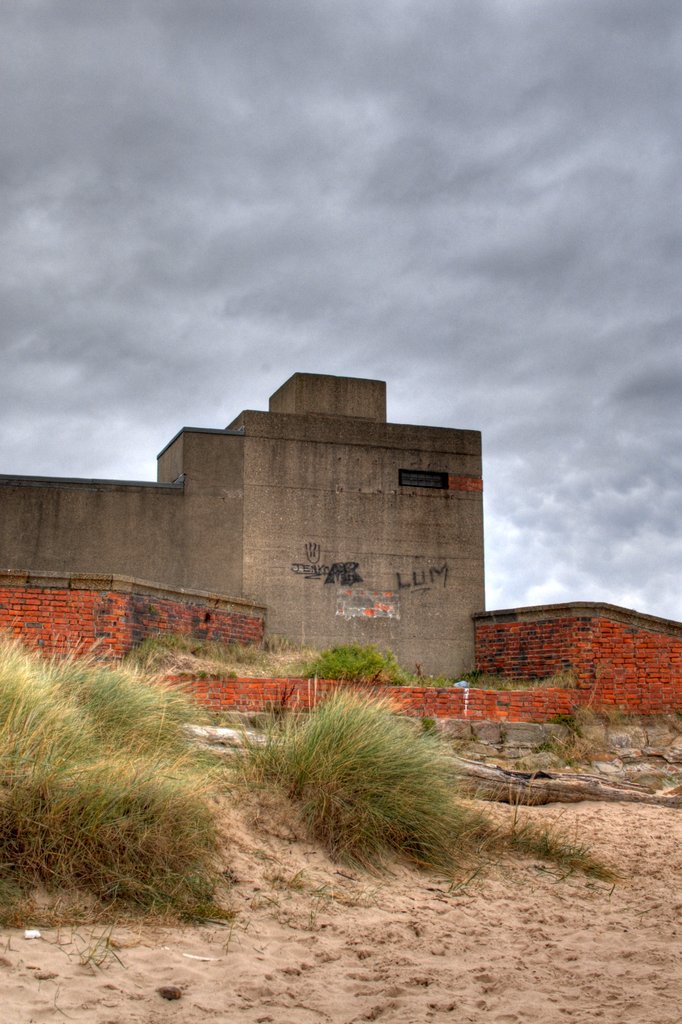 So a three -`room` layout evolved, the `rooms` being the watch position with a good view of the water overlooked; communications/chart room; and crew duty room, which was often the self-defensive part of the building. Usually the post was built as a three or two-and-a-half ‘decker’ tower, but a linear type could be substituted in certain situations. Normally reinforced concrete wars used but a few were built of brick. Posts were usually rectangular or square, but a very few linear posts were similar to elongated hexagonal pillboxes.

Towers were much more common and, working from the top downwards, were topped off with a `turret’ or cupola offset by 45 degrees from the ‘fore and aft’ line of the tower. The turret will be found to have a wide observation slit which takes up most of the front two sides of the lozenge-shaped turret, which had as little command, or height above the roof of the tower, as possible.

The room below has a square hole in its ceiling with, directly below it, either a block of concrete or a steel platform on which the observer stood. In one corner will be found another hole, usually with evidence of a steel ladder or wooden stair, or in some rare cases wrought iron step-irons-cast into the concrete in the manner of those often seen in manholes. This room is usually devoid of windows or loopholes, but a few did have one or two.

The fixtures (or evidence for fixtures) will depend on the function of the room and the expected garrison. The turret will in most cases be found to have inscribed into the radial concrete lines running out seawards, in red, black or (rarely) brown. Two cases have been noted with red and black overlaying each other.

Sometimes a folding shelf will be found for binoculars or field telephone (?)

In the central room, directly below the turret, there may be a blast wall, but these are vary rarely found – normally this was an open-plan room. There should be evidence for two wall charts (of the locality), a ‘state’ board for ships, in port and expected movements, two or three telephones, first-aid box (wood or thin aluminium) and two desks or one long table.

As previously noted, a very few will have loopholes at this level but they are not commonly found. Of the few surviving charts noted, half were found to be the appropriate Admiralty chart and the other half the local 6′ to 1 mile (1:10,560) or even, in one case, the 1′ to 1 mile (1:63,360) War Emergency 1940 series Ordnance Survey maps.

Bookcases held the following: Duty Log Book, tide table, recognition book, Signals in Common Use, Handbook(s) on equipment held in that post, and of course Standing Daily Orders and other appropriate reference books, e.g. Lists of Owners, Lloyd’s’ Register of Shipping, etc. Some posts held either two small fire extinguishers or a water bucket and stirrup pump in this room as well.

The bottom room contained weapons for the garrison, a small stove for tea and for the main meal of the day, fittings for hammocks for those off watch but still on call, and alarm bell set. Sometimes small lockers for clothing, etc. may be found fixed to the Inner blast wall, which is invariably in the centre of the room. Sometimes there are signs of blackout shutters on the loopholes but I have not seen any evidence for such shutters on those loopholes intended for machine guns. In those cases it must have been very cold inside in Winter time. Some posts had an Elsan toilet, others a latrine trench outside.

Posts were usually in groups of three for battle redundancy, i.e. one could lose one or even two posts in action without the whole system breaking down, and of course in poor visibility it was probable that one post would see through the odd break in the weather. Something that the others might miss.

Posts were usually some distance apart but sometimes as close as 400 yards edge to edge, or else two on one side of a river and one on the other, or sometimes on islands (which, in large ports, often incorporated earlier buildings).

The above covers the most common sites but freaks can still be found, e.g. the Drake’s Island and Shell Ness sites. In the Drake’s island style the old ready-use magazine was the functioning ‘middle room’ and the ‘turret’ was thirty feet (9.1m) higher up a shaft cut out of the rock and reached via a vertical ladder, and the upper room was much larger than than normal and when first examined in the early 1970s was still fully fitted-out! 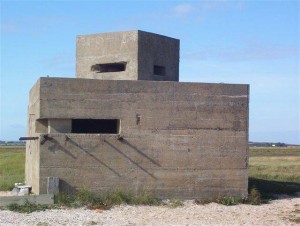 At Shell Ness (Isle of Sheppey) the linear format was used, as at the now-demolished example at Newhaven. Here there was a room divided into two by an inner wall with the `turret’ just slightly off-centre over the wall with access from one room only.

The two-storey brick type had the following layout: Large lower room with, to its rear under the outside `flying staircase’, the toilet (or `heads’ to the R.M.); upstairs to the lookout room with a duty room behind reached directly from the stairs. Cliffe Fort (Kent) on the south bank of the Thames used a recycled room for the W.W.1 QF battery, later replaced by a small brick room with wide windows perched on top of a much earlier B.O.P. or Port War Signal Station. In Orkney and Suffolk even older Martello towers were modified for EXDO duties, but these were exceptional adaptations of old fortifications.

Adapted from `Loopholes No 7`