Rare and  unusual designs normally built for a specific location where observation and a clear view of fire was essential and not necessarily possible with a standard design of pillbox.

This brick shuttered two level defence can be found facing east at the edge of woodland adjacent to the south end of Furnace Pond, Hampshire Hill, Slaugham. The tall pillbox was built to defend the anti-tank ditch connecting the River Ouse and Arun River. The unusual structure was built on a river bed and its height allowed machine guns to fire on fixed lines over the facing raised  river banks. The pillbox has loopholes and purpose shelf supports for the Bren guns tripod. 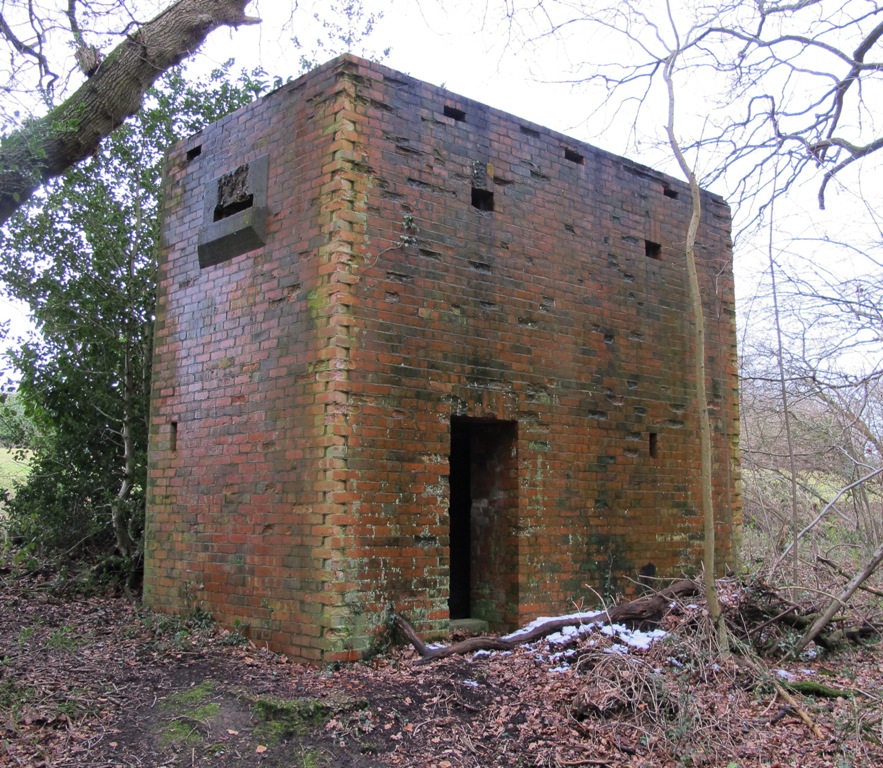 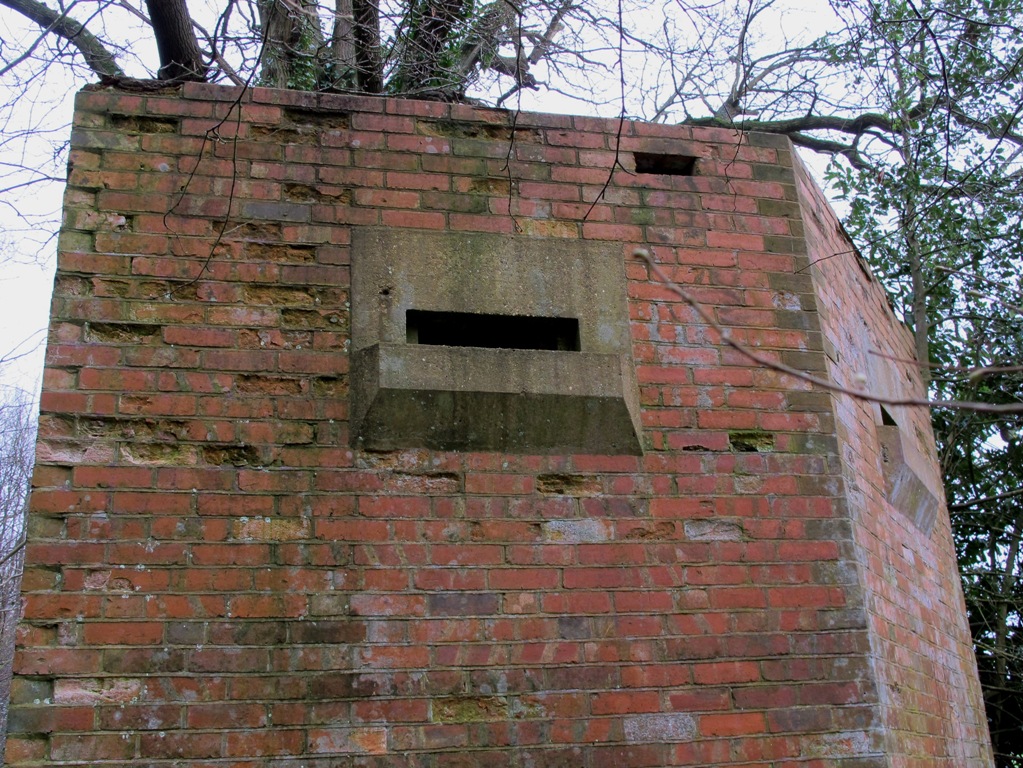 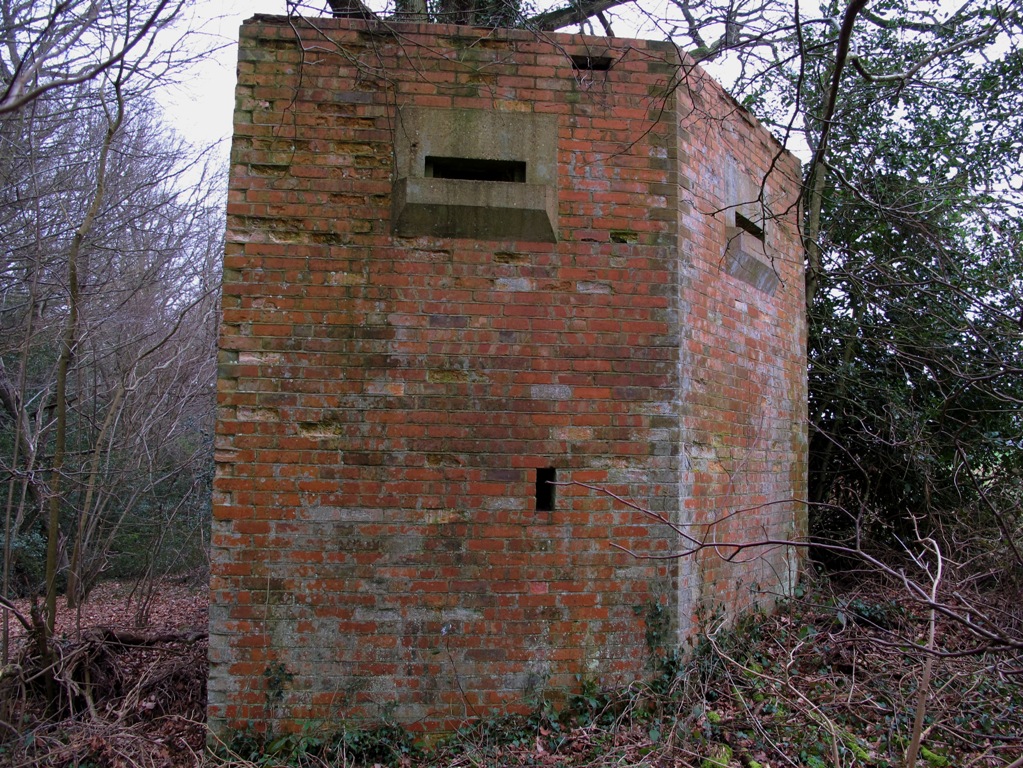 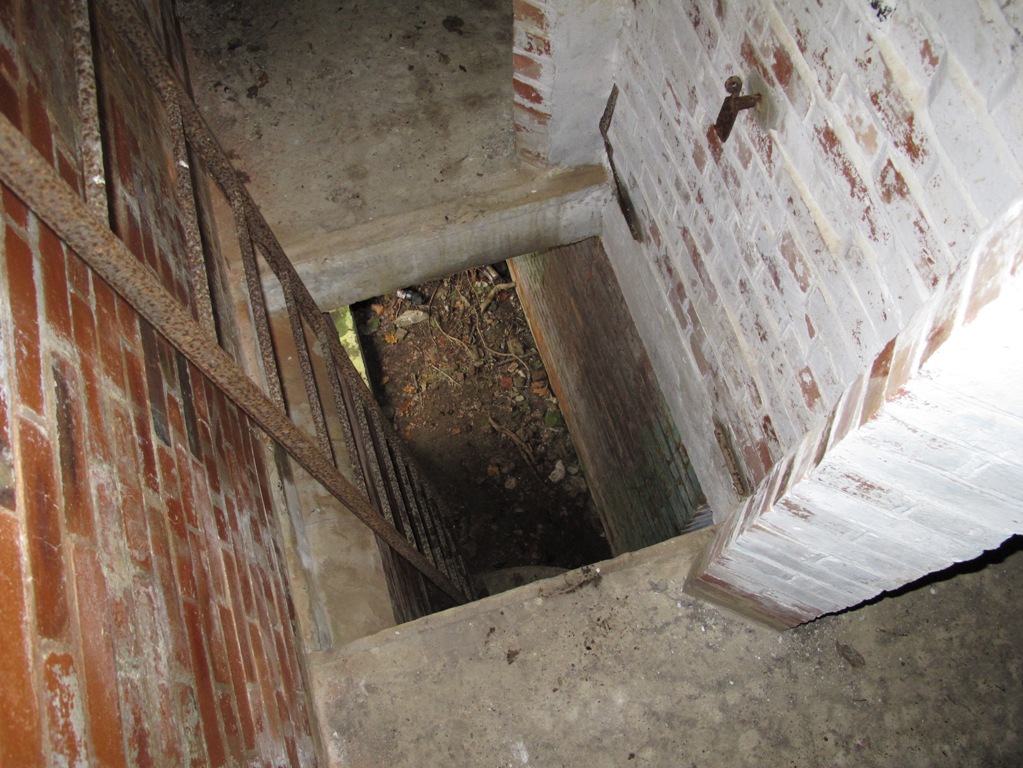 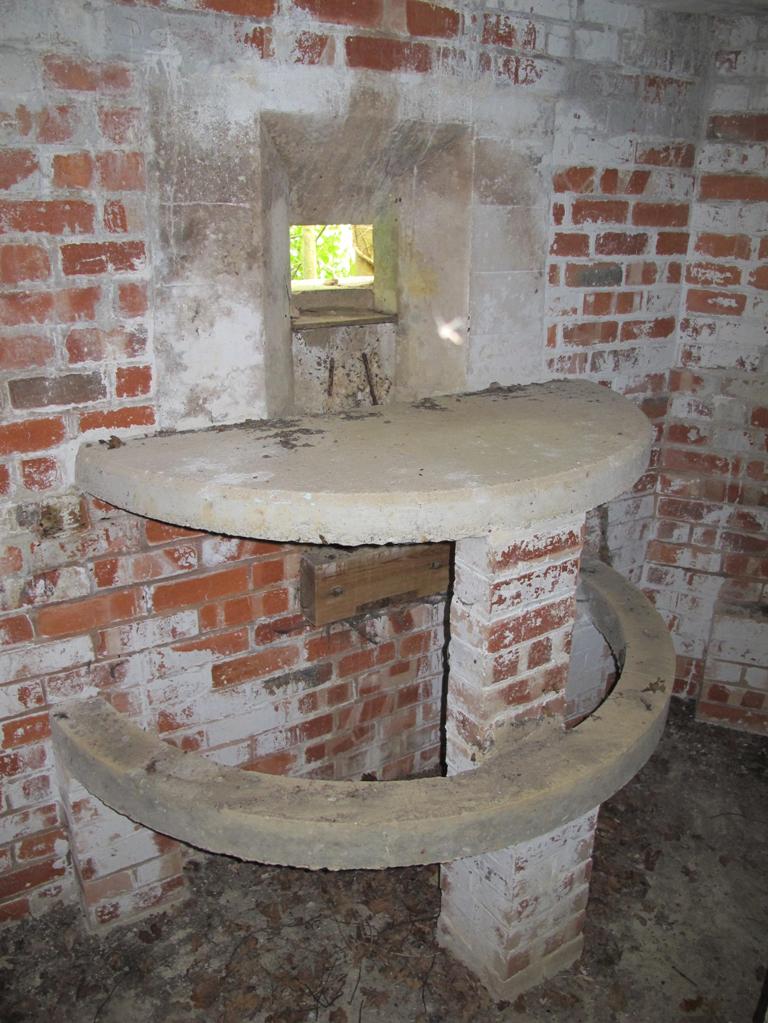 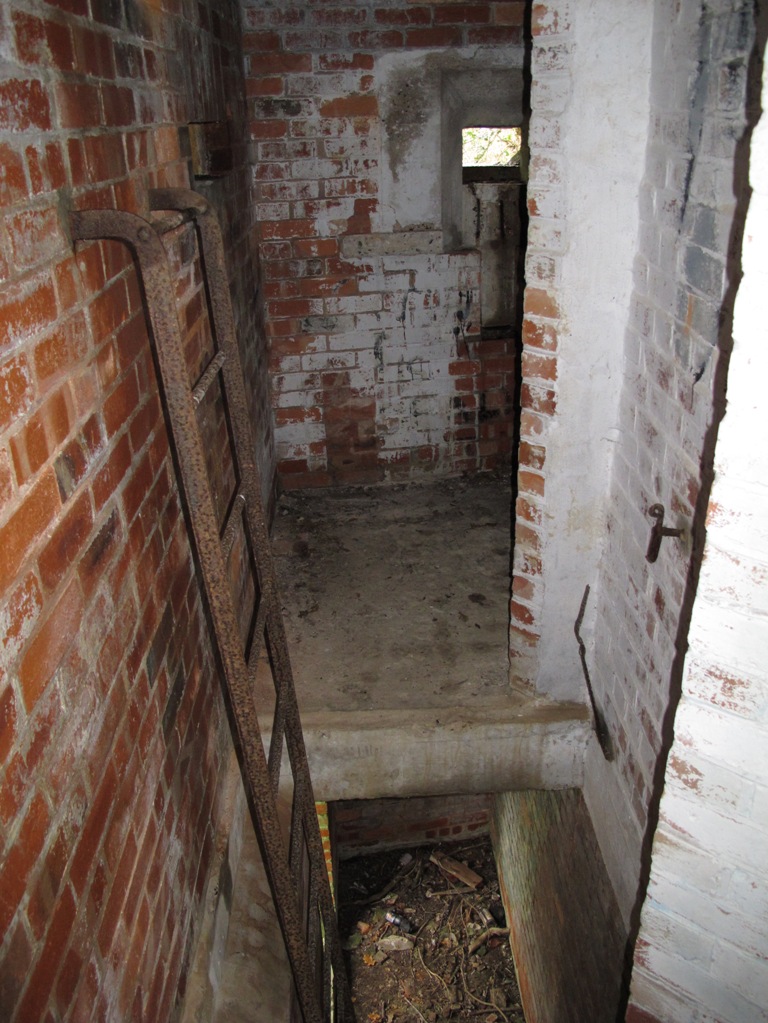 This pillbox is highly unusual as for some unknown reason it appears to have never been finished. The round tower stands within woodland close to the water works beside the A287 Odiham to Farnham Rd.

The tower is brick shuttered and has a seperate curved and loopholed blastwall  that stands the height of the tower, this protects a strange almost full height doorway.

Loopholes formed by seperate casting sections run around the top of the tower, these can be seen from inside the tower along with the corrogated tin ceiling because it seems that a second floor was never constructed?. 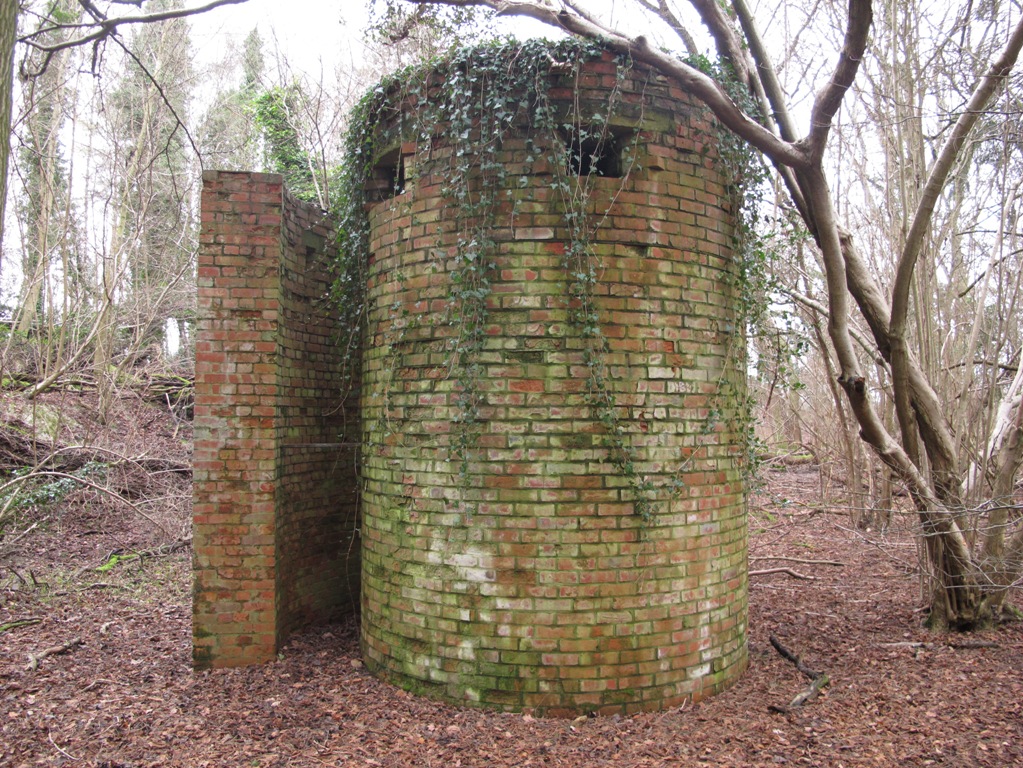 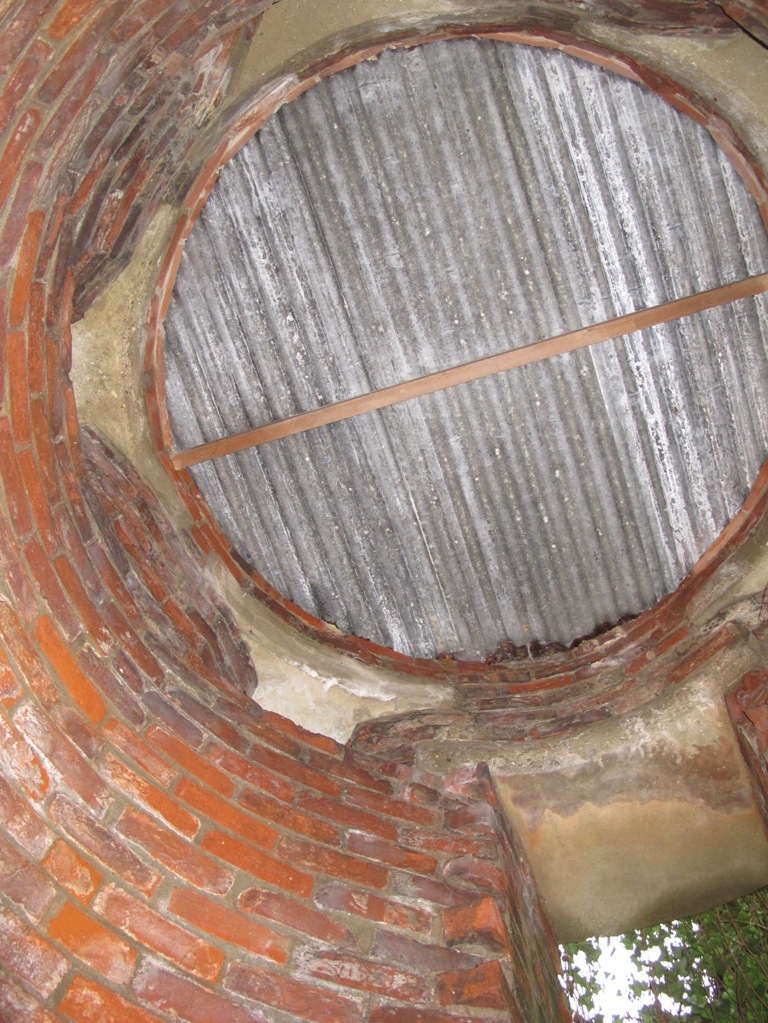 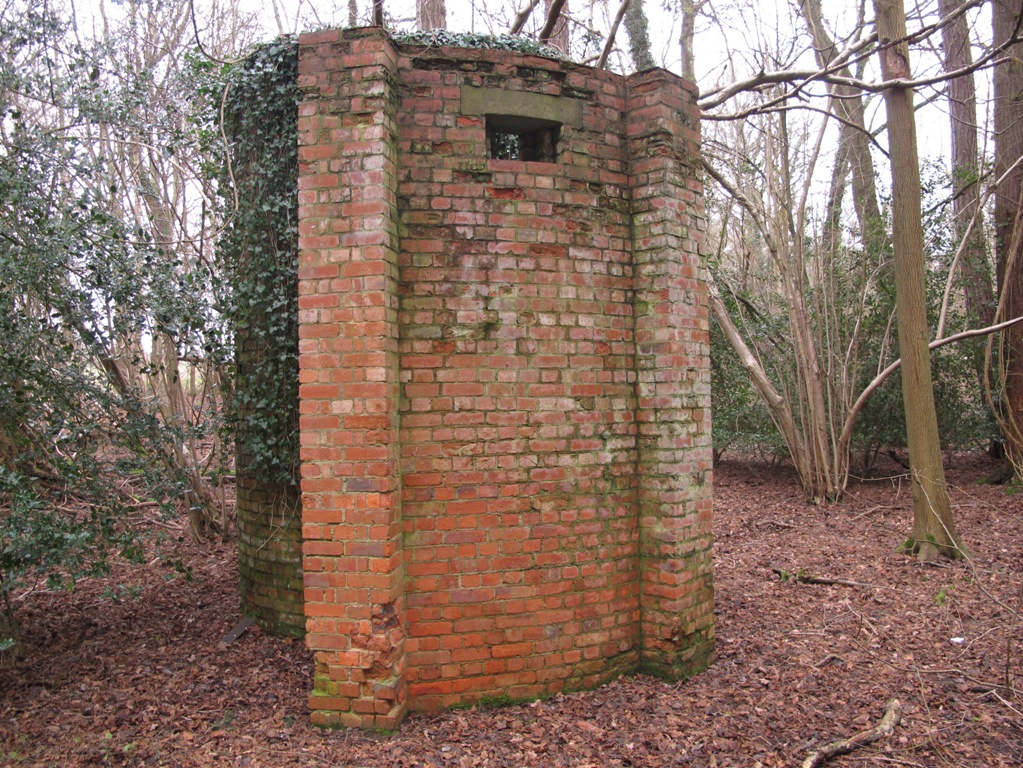 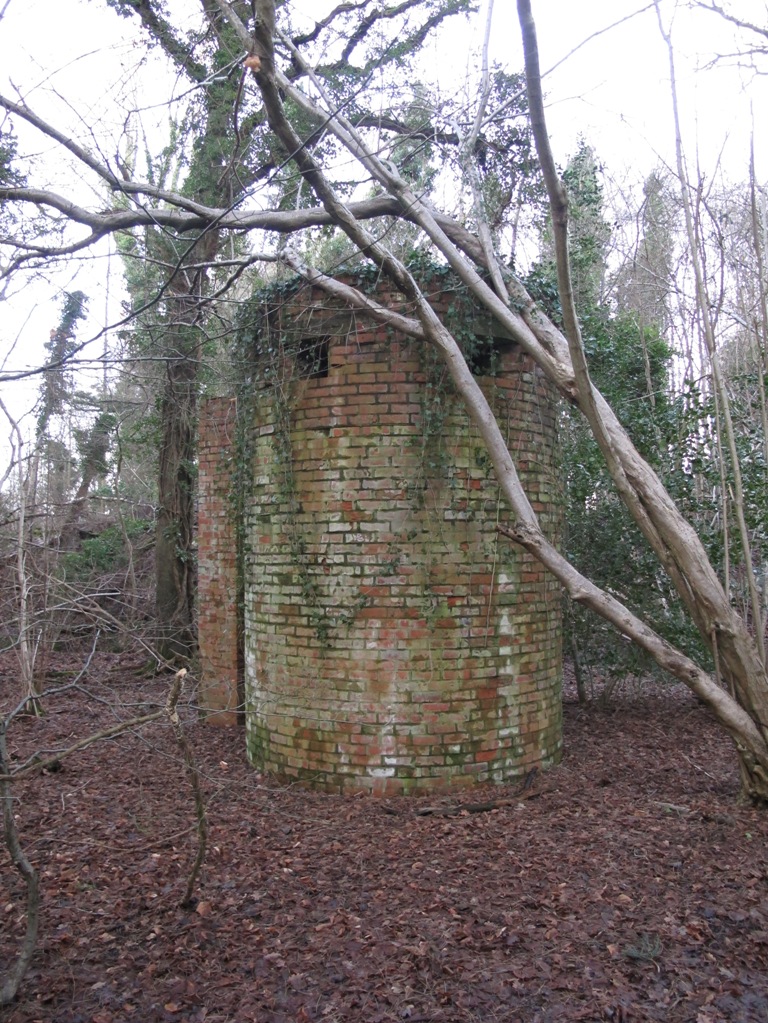 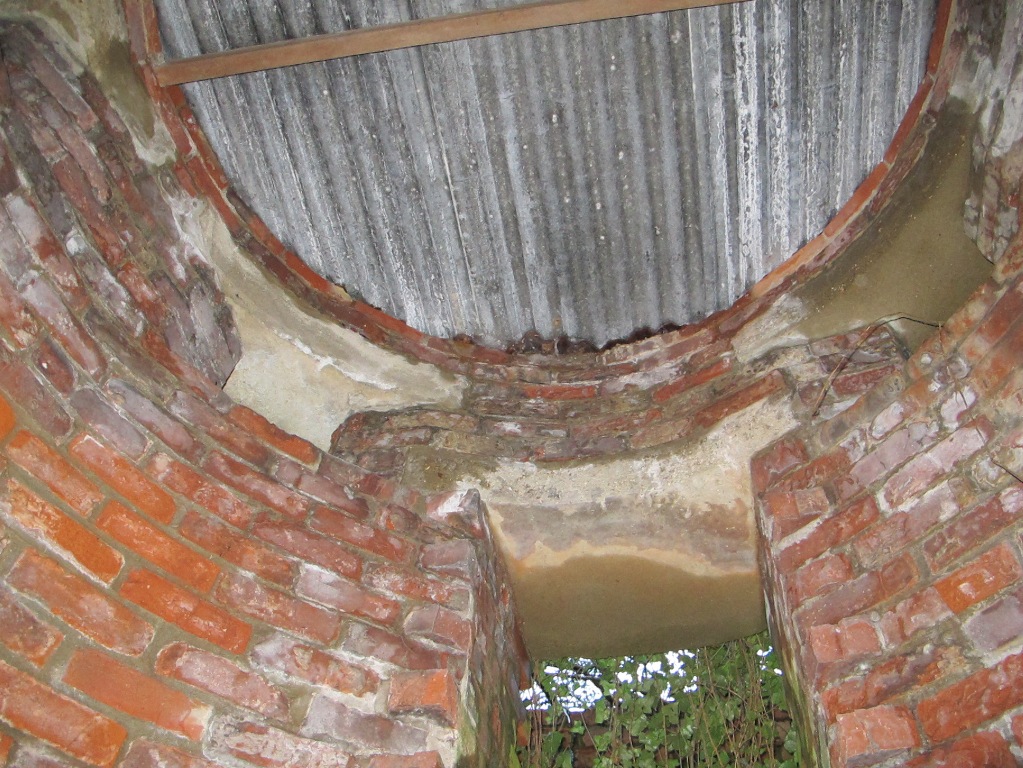 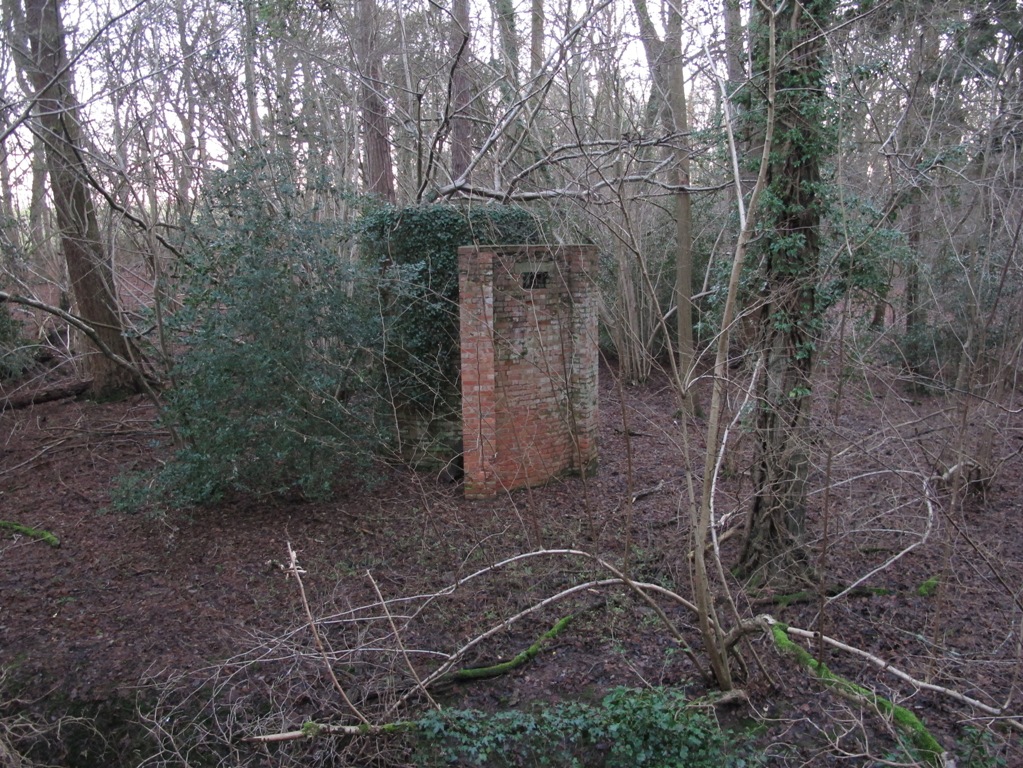 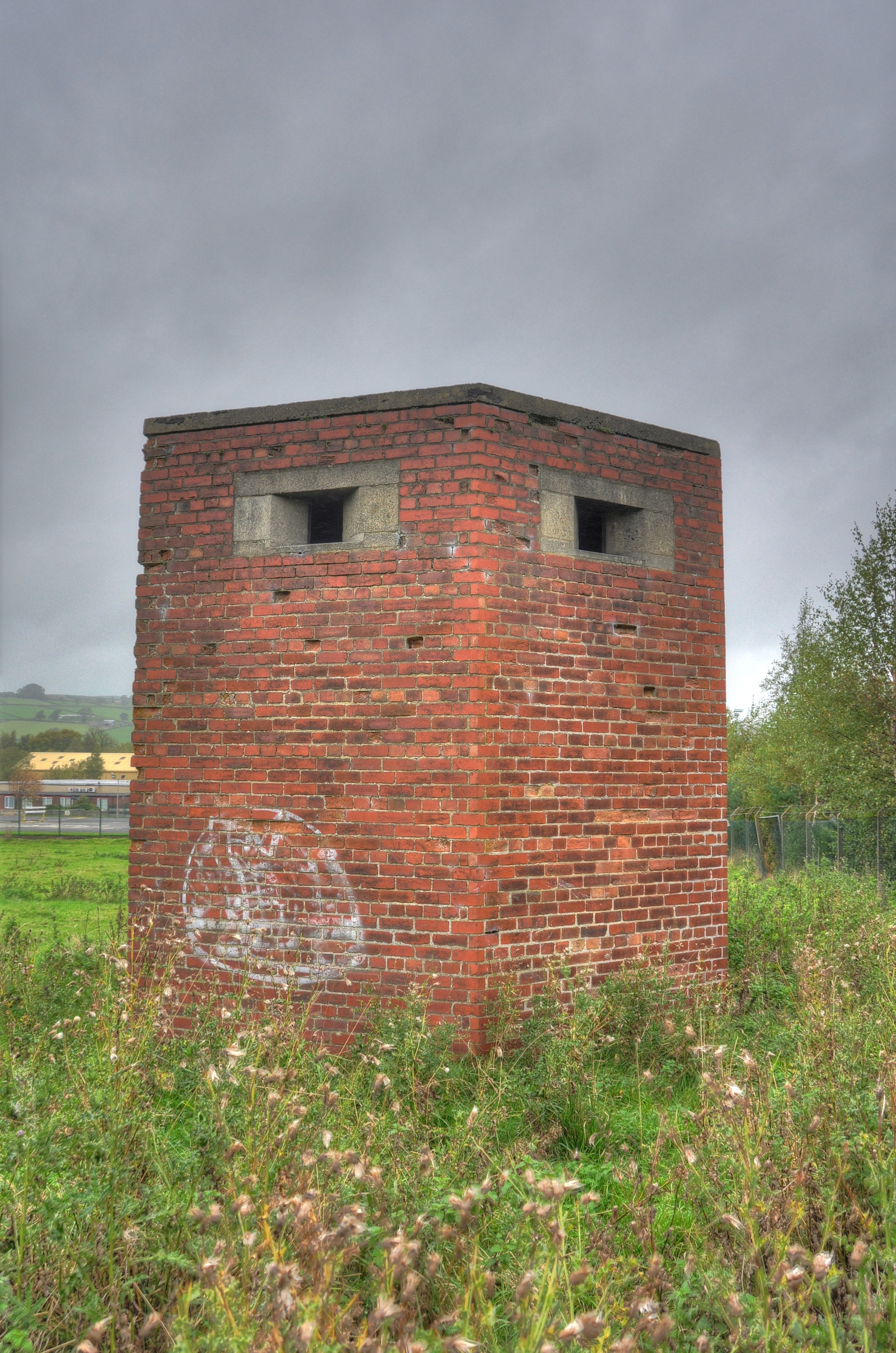 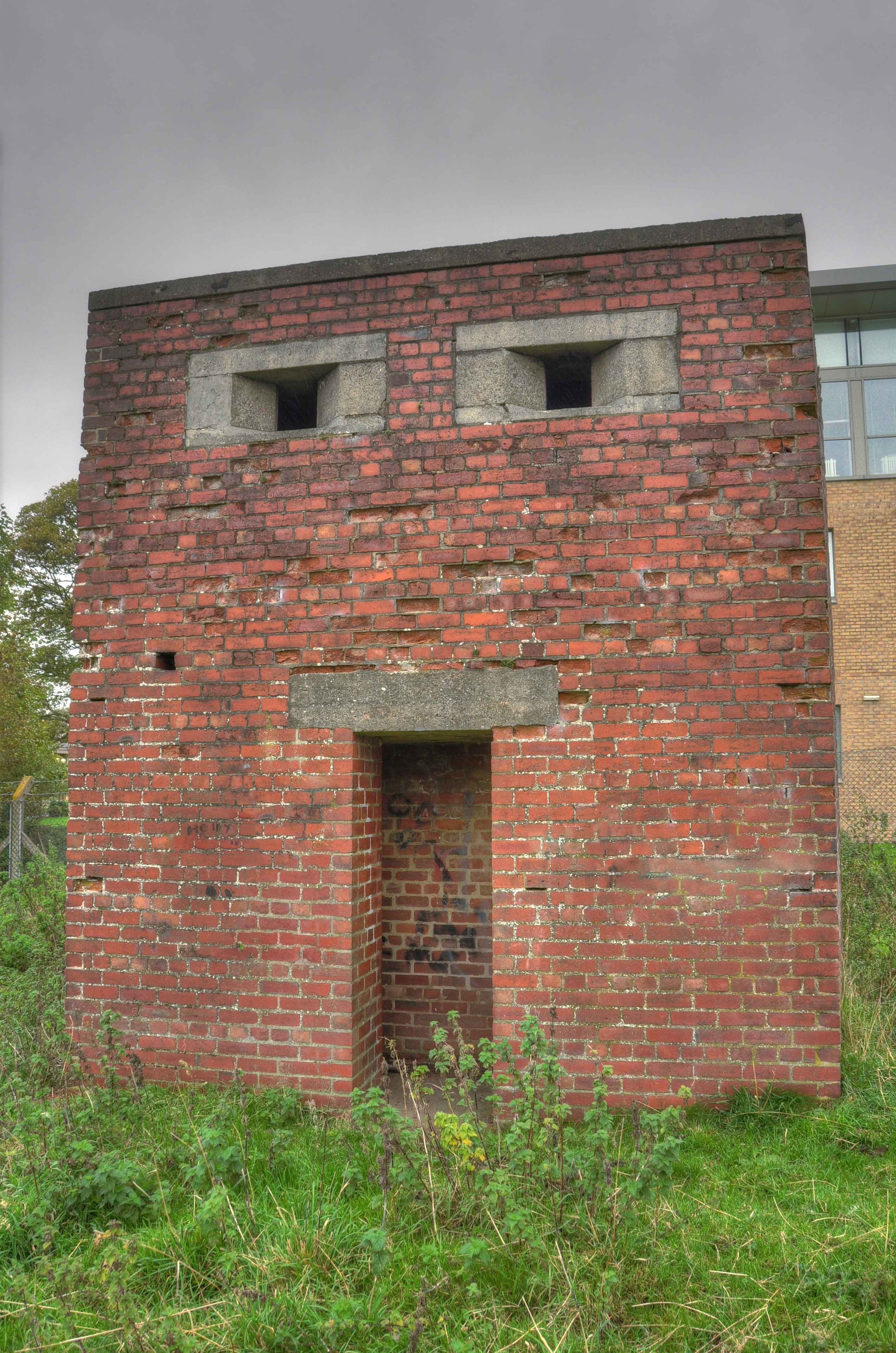 A two storey variant of the type 24. Hexagonal design with a stretched rear wall. This acted as the main pillbox with two supporting fire posts to defend the Southern half of the perimeter of ‘Steeton Dump’ – Royal Ordnance Factory number 22.
The two storey design allows an improved field of view over the perimeter fence and specifically to one supporting fire post which is over 300 metres away to the West.
Access is through the rear doorway on the ground floor and there is a transverse anti-ricochet wall across the interior which continues up through the first floor to the underside of the roof.
Behind this is the remains of a steel ladder leading through a hatchway to the first floor, of which only the top two rungs survive. There are no openings on the ground floor other than the entrance.
Each wall of the first floor contains a wide double splayed embrasure, apart from the rear wall which has two, giving a total of seven.
These embrasures are pre-cast in four parts, sill, two jambs and a lintel and the internal splay is wider than the external one.
The brick shuttered bulletproof walls are 23″ thick, the roof is 9″ thick and the first floor is 12″ thick. The bricks used were ‘Phorpres’ bricks in English Garden Wall bond.
Each box has a ‘GPO’ manhole cover outside it, which, along with evidence of cable clips, conduit pipes and wooden internal shelf brackets suggests a telephone system was also used for communication.
The first floor walls are daubed with paint and some modern graffiti, but nothing that appears to be contemporary with WW2.
A separate set of seven pre-cast embrasures lie in long grass at the opposite side of the perimeter to the West, suggesting the intention to create another type 24 pillbox at the opposite side of the factory grounds.
These three structures were grade two listed as a defensive set on 16th December 2009 after an application to English Heritage by Keighley and District Local History Society.
The land around and including these three pillboxes has been given planning permission for over 200 houses but due to economic and technical issues, the work has not commenced (as of January 2013). 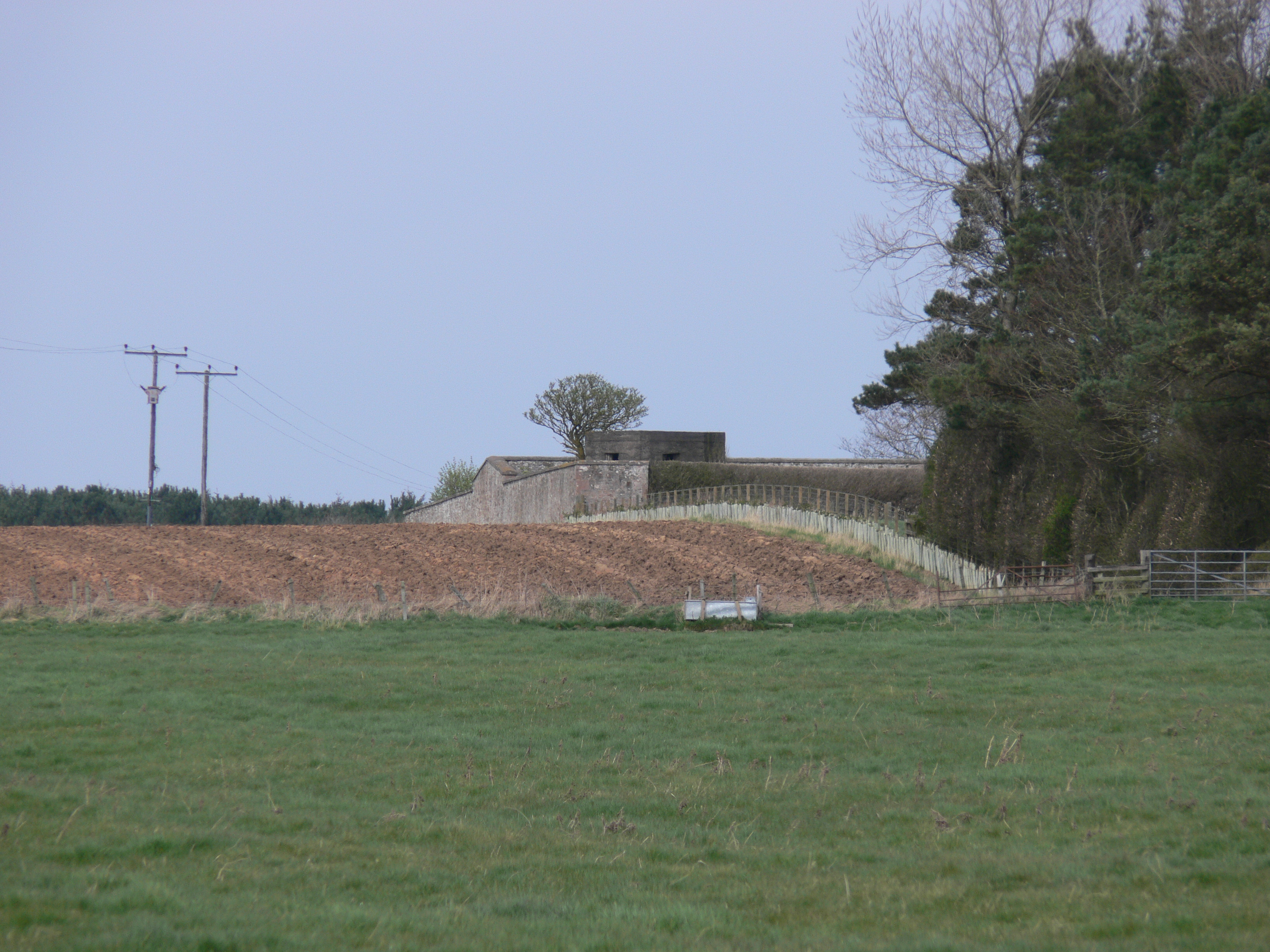 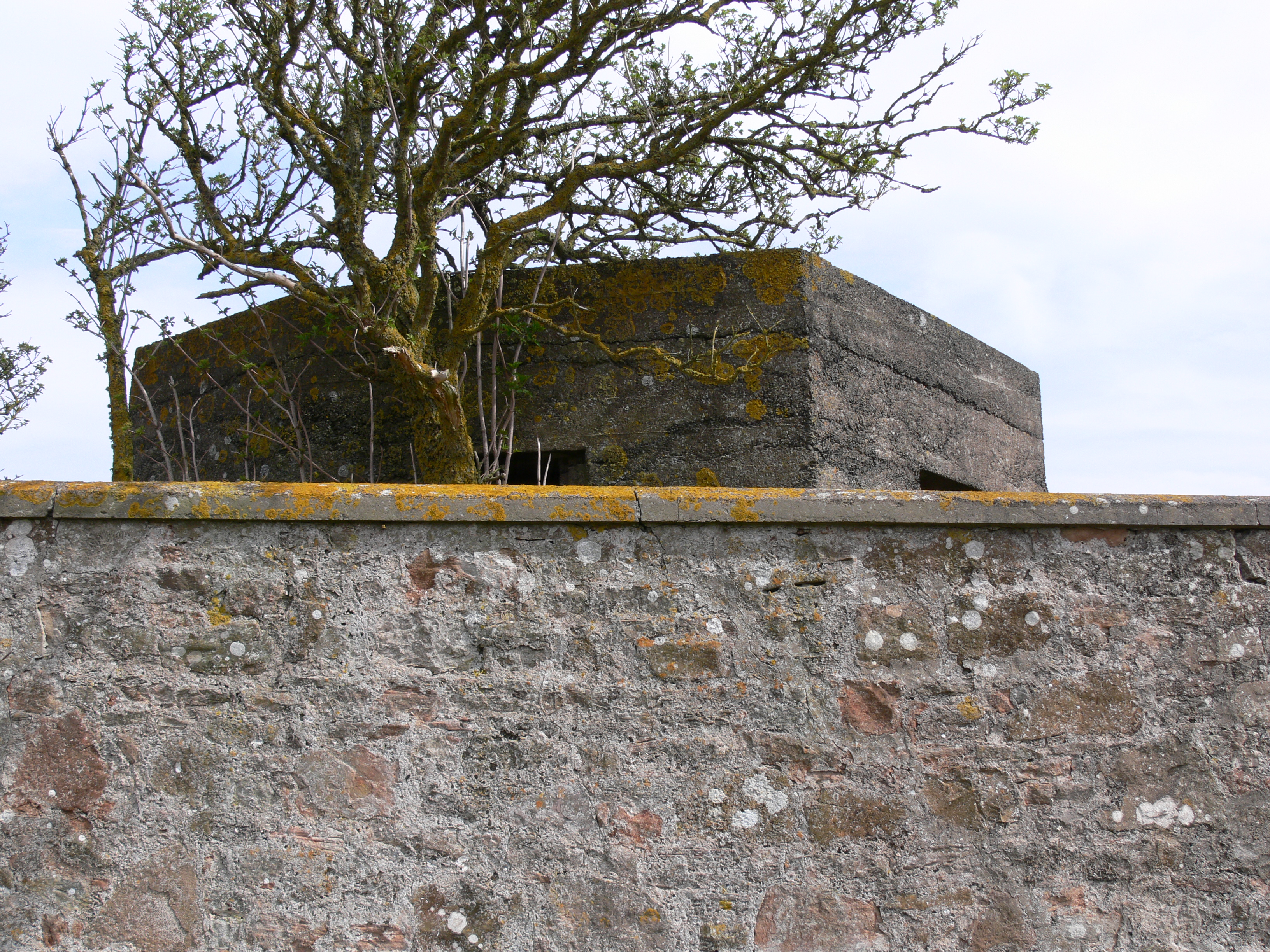 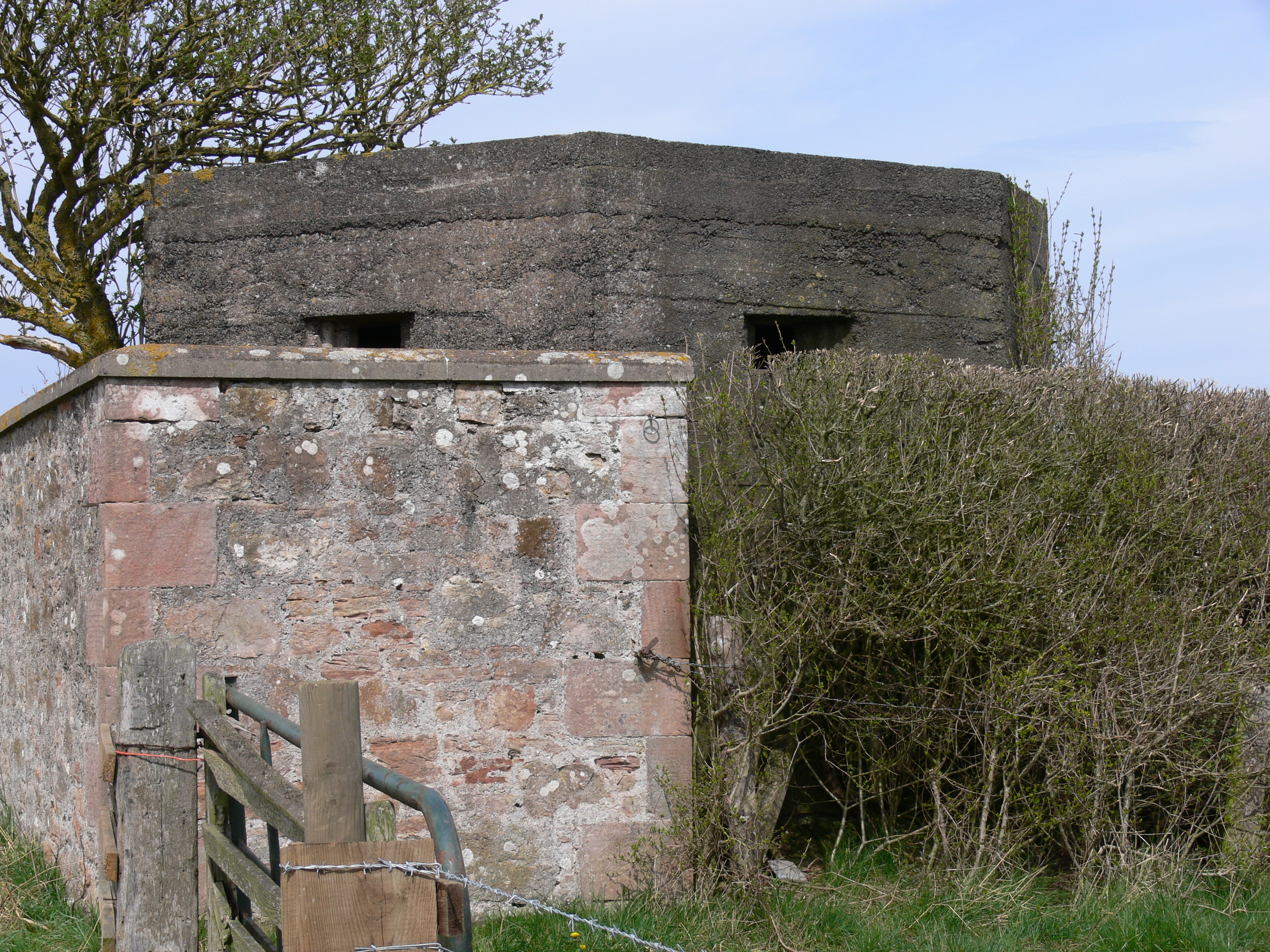 A Northumberland ‘D’ Type built unusually tall to allow fire over the wall in front.

A double height pillbox has been found and reported by PSG member Rob Young, the defence can be found on GHQ Line East Sussex/Kent at TQ5086436527 at Withyham in East Sussex. The pillbox is un recorded by the Defence of Britain Project and  is located on private property between Hartfield and Withyham beside the B2110 Road.

The bullet proof tower type 22 is mounted on a base that is just over four foot tall, the unusual defence is quarter of a mile south of the River Medway and now disused railway line, the pillbox faces 135 degrees south east and looks over open fields and high ground that gradually increases in gradient.

According to the image the rare survivor appears to have been formed using wood shuttering, the rear wall is devoid of loopholes and a ladder is required to access to a full height doorway that starts approx four foot above the ground. Internally it appears to have a standard blastwall, the defence stands approximately 135″ tall and has outer walls that measure approximately 81″wide. The basic stepped loopholes are commonly found in type 22 pillboxes in Sussex and Kent.

Thanks to Rob Young for reporting the find.

The former airfield at Acklington in Northumberland has a few remaining defences, despite the proximity of Open-cast mining and most of the airfield being turned into a prison.

Amongst the remaining pillboxes are three Two Storey type 22’s. They have an external staircase up to an anti aircraft position enclosed by thin concrete walls whit a pole mounting for light machine gun. One of these has lost it’s staircase but is otherwise intact.

A site specific variant, It is built to a larger double height cut into an earth bank. It was built higher to provide a good field of fire over Whites Bridge which it was built to defend. It has 5 sides and just two loops holes, both on the front facing walls. There are high up air vents in the two side walls. The rear wall entrance is protected by an L shaped blast wall. Of note is that part of the rear wall was timber shuttered whereas the remainder of the pillbox is brick shuttered. Inside despite just the two facing loopholes there is still a standard Y shaped blast wall. Thanks to Rob Young for this one too.

A recent re-discovery at Roehampton Vale in London has brought this double decker pillbox to light.