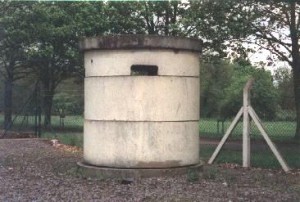 No doubt many of you will have noticed the large number of Concrete `Pipe` type pillboxes sprouting in military establishments during the last few years. In my experience they appear to be mainly used by the Royal Navy and Royal Air Force, though I have no doubt that some of you will have found them on Army sites as well.

It is clear from inspection of one of these that it owes much of its design to the well known WW2 Norcon Pillbox.

Nigel Dawe made some enquiries at an airbase “somewhere in the south of England” as they used to say and was told quite firmly that it was a new design, named after the inventor, the Yarnold Sangar.

As you can see from the photographs, the loop section has the loops set in its lower edge. This enables two loop sections to be placed together, one upside down and the other the correct way up, giving a larger aperture if required.

I have seen a variety of versions of this set-up. Those at the former RNAS Portland use several blank sections to raise the height of the pillbox. e.g. Floor-Blank-Blank-Floor-Entrance-Blank-Loop, thus raising the pillbox around five feet. Access in this case is via a short ladder.

The photographs below illustrate the most common example.

Adapted from an article in `Loopholes` Journal Number 14

I can give you some first hand information about the Yarnold Sangar. Flt Yarnold and I were officers in the RAF Regiment during the 1980s. During this time, my colleague had an idea to reduce the effort involved in maintaining sandbag based defensive posts around RAF airfields. Having seen some large concrete drainage pipes he had an idea. From this he contacted the pipe manufacturer and got them to create some pipes sections with slots cut in the top of each section, plus a larger one for a door. The top of the sangar was essentially the manufacturer’s standard inspection cover. Once stacked on top of each other the sangar takes shape. (Construction is quick and simple as the standard pipe sections are formed so their top and bottom edges interlock. Consequently once placed on top, no other securing work is needed.)

We took the first example of the sangar to a range in North Yorkshire to prove its protective qualities by firing bursts of GPMG fire at it. In this it performed much better than expected.

With the design and protective information to hand my colleague presented this to the RAF and they adopted the design. My mate got a small reward for a design which savesd the Forces a few million pounds per year. So to recap, the design was created around 1986 and was not based on any previous pillboxes.