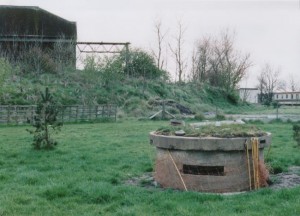 Location: On sea wall between remnant of former moat to Hilsea Lines, retained as a drainage channel for former airport and present housing estate (since this dig this has become a community of 7000 persons) and the footpath on the Portsea Island side of Port Creek.

Never were there more than four persons on site at any one time and twice only one (this was a mistake and very nearly proved fatal!).

The first task was clearance of brushwood from both access hatches, installation of pump and the digging of a small drainage channel into the Creek to take the run-off from pumping.

The second task was to enter the west hatch and then free the east hatch (which was jammed shut) in order to commence excavation of the interior. After seven hours the east hatch had been freed and could be opened, and was propped open for safety and marked to that effect.

The third task was to dig. This took up the following seven months (allowing for study visits to other sites) and required the purchase of extra buckets. Work had to stop twice for the site to be re-pumped as it flooded in heavy rain storms. Finds (listed hereafter) were recorded as part of this task.

Fouth task was to actually survey and draw out the site before handing over to Portsmouth City Council for preservation by sealing down the hatches with a skim of concrete.

The main work could only be done with one, or at most two, persons at the ‘face’ digging and/or recording, one moving the spoil safely to the Creek or taking artefacts for retention elsewhere, and acting as first-aider and safety officer (and often as information officer for the passing public!).

On the Maundy Thursday military half leave period 1980 I entered the pillbox alone but put up the warning markers etc which were by that time stored in waterproof bags in the east hatch as normal practice, and set about removing the final few shovel` worth of shingle from under the counterweight block. As I did there was a sudden snapping sound and, shocked I moved closer to the side of the outer shell. Suddenly the counterweight block fell four feet or so, coming to rest on the sheet piling shelf and the inner end of the timber beam mentioned before. The crash was heard (and reportedly felt) some distance away and within a very few minutes a recovery party from the workmen on the building site arrived. Thankfully I was OK, apart from the shock, but the shovel and the last of the shingle are still under the block. We have learned from that always to go to such sites in pairs (or more) for safety reasons.

Henry Wills and follow-up work at the P.R.O. (WO199) indicated that the dangers of the counterweight design were such that only 10 or at most 12 were ever installed. Portsmouth had, for the record, one of each type, i.e. this one, a compressed air type and the more common high-lift hydraulic ram type. It is the latter which was excavated in 1983 and re-sited outside the D-Day Museum at Southsea Castle.

The timber beam was ash and, on close examination by torch the Saturday following the incident above, was found to have the markings of the R.A.O.C. sawmill at Hilsea. We presume that it had been delivered here as an aid to installing the counterweight, or to support it while the wires were tensioned, as the angles were such that it could not have been got into the pillbox either of the hatches and down underneath the block after installation into its place of rest. It was placed on edge.

The date square which reads “RR 1941” was evidently scratched very skilfully by someone nearly a year after the pillbox’s construction.

The helmet: this design, according to the Imperial War Museum, was re-issued in 1940 for use of workers in the aircraft construction trades as the pressings for it were still extant in the manufacturing premises in Walsall. This leads to the ammunition, as the perimeter of the airfield was defended by a Home Guard unit formed exclusively from the employees of Airspeed Ltd. The exact origin of the ammunition is now lost in time, but the then curator of the Royal Military Police Museum (whom we heartily thank) informed us that several of the then-embryonic military and regimental museums were searched for any fireable weapons, and munitions of Home Guard units considered most likely to have to engage the enemy. Hilsea City Airport Company (or Platoon) were well within this category as they were on a very vulnerable airfield within a major port/military zone which would have been a great prize for the enemy and a great loss, if lost, to our War Effort. He further suggested that there may have been training carried out at targets in the Creek from the pillbox, hence the two fired rounds.

This is a very good possibility as the News of Portsmouth has in its archives a series of photographs taken in 1940/41 of the Home Guard on the airport using a wide variety of weapons and in a number of weird styles of so-called battledress, including modified work overalls and storeman`s coats as well as more normal issue battledress.

How The Pillbox Was Raised

The evidence is that the four-man crew who were to man this type of pillbox would, on a given order, place one foot each into a 6″ x 4″ x 4″ foothold inset into the counterweight block and bear down together. As the block came down they ducked under the rising pillbox and then stood on the block. To get out it appeared that all four would have to place one foot on a ladder and then step off the block in unison. There were catches (see drawing) but they appeared very flimsy – certainly not strong enough to hold the counterweight block down unaided.

What would happen if wires were broken in action or is a crew member were shot and injured or, worse still, killed?

I can see the counterweight block being jammed at an awkward angle or even rendered useless. Worse, the unsupported pillbox might crash down, thus trapping the occupnts. This, perhaps, was why so few of this type were built.

The sump was only sufficient to cope with a small amount of water – about seven gallons – and no pump (or evidence for such) was ever found, so we believe that the galvanised bucket found on site was for bailing it out. 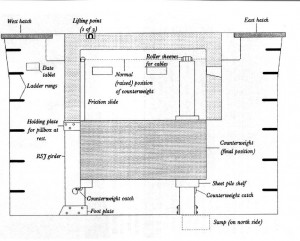 Adapted from ‘Loopholes’ No. 15