As Flame Trap Fever  continues to sweep the nation fuelled by recent `Loopholes` articles, I have discovered a good example of a Flame Fougasse in-situ on the South Downs in West Sussex, demonstrating that it is a great deal easier to find such a thing once you know what one looks like. 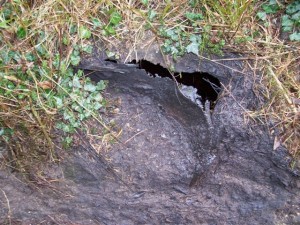 The fougasse consists of two batteries of four barrels dug into a steep roadside slope beside Saddlescombe Road (TQ 267118) near the village of Poynings. The batteries are arranged so that one group is angled to fire uphill, and the other downhill. The lower group is buried right beside the road, so close in fact that their exposed ends have been bent by passing vehicles (if only they knew it!). One barrel in the group retains some of its oily contents, which is what initially drew my attention. In the others the liquid component of the incendiary filling has evaporated or leaked away, leaving behind a firm tar-like substance. 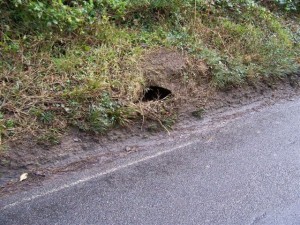 The upper group is set back a few feet from the edge of the road where the barrels remain almost entirely buried and apparently in a better state of preservation. At the rear of each barrel is a vertical earthenware drain pipe which would allow a charge to be placed when required. 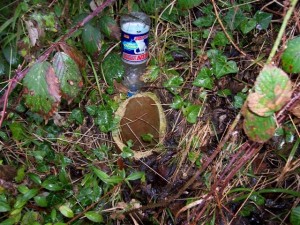 Early fougasse barrels were filled with an incendiary liquid comprising 25% petrol and 75% gas oil. They had a 5lb propelling charge of gunpowder against the rear face, and an 8oz ammonal opening charge on the front, which also helped ignite the mixture. The propelling charge was to be fired by a No. 14 Service Fuse, and the opening charge by a No. 27 Detonator. The complexity of this arrangement led to extra barrels having to be placed to allow for failures and misfires.

Two replacement incendiary mixtures were developed; either a 40% petrol 60% gas oil mixture (40/60 or Standard Mixture), or a tar, lime and petrol gel known as 5B.

The 5B mixture was designed to stick to vehicles and provide a longer burn time. The mixture was not without its difficulties, as it was found that the heavier parts of the liquid settled over time which presented problems, especially during cold weather. This led to football-sized lumps of blazing tar travelling on random trajectories during tests, which apparently looked quite good but wouldn`t overly concern the crews of armoured vehicles.

Barrels were generally painted black and marked on one end to indicate their contents. 40/60 barrels were marked with a triangular border containing the letters `FS` beneath an `F`. Below the triangle was a single number and letter which was the manufactures`batch reference. The 5B barrels were similarly marked up with `5B` beneath an `F` inside of a triangle.

After further research and testing by the Petroleum Warfare Department the chargeon the front of the barrel was found to be unnecessary and the ammonal charge alone at the rear was sufficient. Electron turnings (90% magnesium 10% aluminium) was placed between the charge and the barrel to ensure effective ignition. Charges consisted of 4ozs. of electron turnings, 8-16ozs. of ammonal in 4oz. cartridges, a C.E. or guncotton primer and an electronic detonator. Early charges were placed in `rubber bags`and permanently buried behind the barrel. The problems encountered with damp led to charges being placed inside tins and sealed with tape. This coincided with the introduction of the safety fougasse, where a drain pipe 4″ internal diameter was buried against the rear face of each barrel allowing the tin containing the charge to be lowered into position when required. It was later realised that having assembled charges lying around with a detonator at their heart for any length of time was an invitation to disaster.

An alternative method of assembly was devised where only the primer remained inside of the charge, connected to the outside of the tin by a length of primacord or cortex to which an electric detonator could be taped when necessary. An 8oz.charge of ammonal was used for barrels containing 40/60 mixture, and 12oz. was used for heavier 5B filling. The tins containing the charge were marked as follows:

Each battery of four barrels contained two of each type of filling and were wired in series to be fired simultaneously from either a MK VII exploder or a high tension battery.

An interesting letter of 6th May 1942 from the Commander, North Midland District in the PRO at Kew (WO199/1433) refers to a new operational commitment whereby the south of the command must be protected against flanking attack. In the absence of a strong natural defensive position across South Leicestershire and Rutlandshire, it was proposed to create a series of anti-tank islands, for which they were requesting 2000 fougasse barrels…. 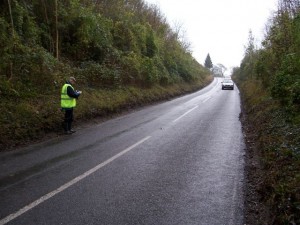 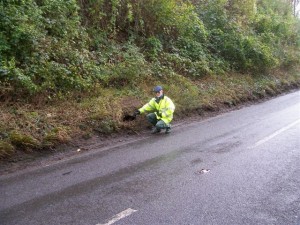 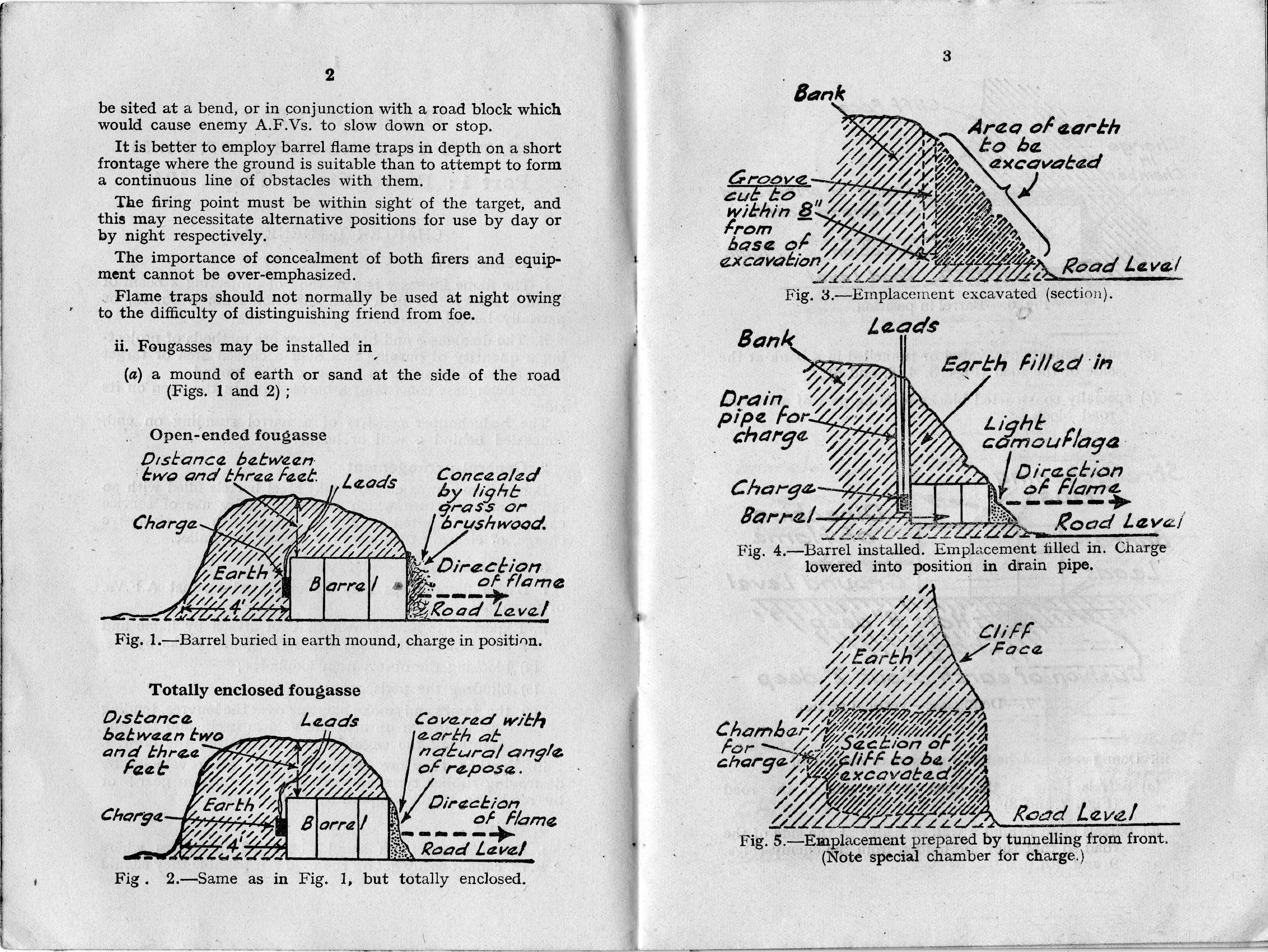 Adapted From An Article Published In Loopholes No 32