In the late 1930s as threat of war with Germany grew so did the general anticipation that if war came it would involve an aerial bombing campaign. The railway companies were faced with the prospect of keeping vital buildings, such as signal boxes, operational despite the threat of damage from such bombing.

The traditional signal box design evolved in the latter half of the 19th century. Generally they comprised of two sections, the operating floor and the locking room. The operating floor is where the signalman works controlling the levers that operate the points and signals, and is located above the locking room in order to give the signalman a good view of the area he controls. The locking room is where the equipment to prevent the signalman operating the points and levers in an incorrect or conflicting sequence is located. Signal boxes control the operation of points and signals at various locations where different routes converge and divide, where sidings join the main line, or to break lines into signalled sections to enable a higher frequency of train movements. Although some companies built signal boxes of all brick the majority of signal boxes in use in the 1930s were of wooden construction, either totally or with a wooden superstructure on a brick base. This meant a huge number of signal boxes were susceptible to damage from an aerial bombing campaign, either from a direct hit or more likely from blast damage. 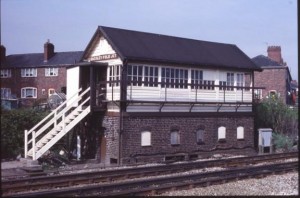 Baguley Fold Junction Signal Box, Manchester, a traditional signal box with a brick base topped with a wooden superstructure

The railway companies took the threat of war quite early. In 1938 London Transport was building signal boxes with reinforced roofs and steel shutters to protect the operating floor windows, and in early 1939 the London, Midland & Scottish Railway put plans into action to replace several vulnerable signal boxes located on gantries over the railway line.

Action to limit damage to existing signal boxes included fitting steel plates over, or the bricking up of locking room windows. 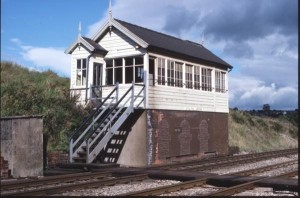 Some signal boxes received blast walls to protect them. 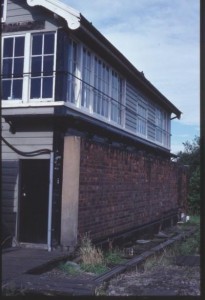 Darnall West signal box, Sheffield, with a blast wall built in front of it. 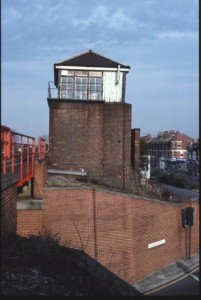 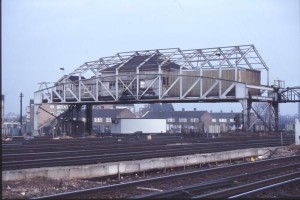 Clapham Junction Signal Box was covered by a steel canopy during the war.
The wartime roof was later removed to reduce weight on the supporting girders leaving just the framework.

By the end of 1939 the “Big Four” railway companies had formulated their respective ARP signal boxes designs, indeed the first operational ARP signal box was opened by the London, Midland & Scottish Railway at Crewe Coal Yard on 10th December. 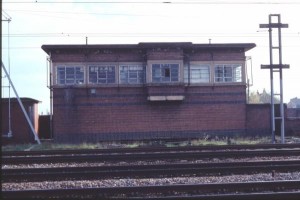 Despite being of a hefty and sturdy construction, compared to conventional signal boxes, ARP signal boxes were designed to prevent blast damage rather than a direct hit from a bomb. The London, Midland & Scottish Railway ARP design for instance was design to resist a direct hit from a mere 1kg. incendiary bomb. The ARP signal boxes were generally built with 14″ thick brick walls, a reinforced concrete roof around 12″ thick, concrete floors, and the use of wood was kept to a bare minimum to minimize the possibility of fire damage. At the important railway junction of Crewe however, the London, Midland & Scottish Railway opened two ARP signal boxes in 1940 to control the approaches to the station. They were built with 15″ thick reinforced concrete walls and reinforced concrete roofs that were 18″ thick. 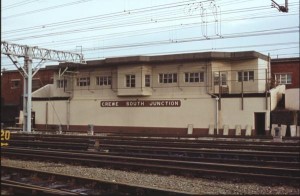 Dunham Hill signal box, Cheshire, which closed on 2nd September 1969
The solid construction of most ARP signal boxes led to problems demolishing them after their operational life was over, and despite closing many years ago a number of ARP signal boxes still standing. 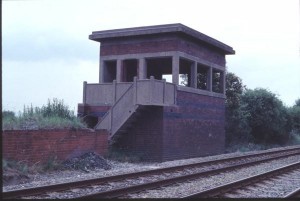 Dunham Hill No2 signal box, Cheshire, which closed on 25th November 1951 but, was not demolished until Autumn 2008. The solid construction of most ARP signal boxes led to problems demolishing them after their operational life was over, and despite closing many years ago a number of ARP signal boxes still standing.

Of the “Big Four” railway companies the Great Western Railway ARP signal box design seems to have been based on a design introduced in the early 1930s for the resignalling of several major stations. It featured 14″ thick brick walls, a flat reinforced concrete roof, concrete lintels, but reverting to wooden window frames instead of metal ones. The resemblance though may have been purely coincidental, as the Great Western Railway’s ARP design may just have been the company’s interpretation of the Railway Executive Committee’s wartime design. Around 45 ARP design signal boxes were built during World War Two. Of these Burghclere, Highclere, and Lansdown Junction (at Cheltenham), all built in 1942, were derelict but still standing in 1997. The last operational example, at Castle Cary in Somerset, was closed in February 1985 where it had been built to replace a box destroyed by bomb dropped by a lone Messerschmidt 110. 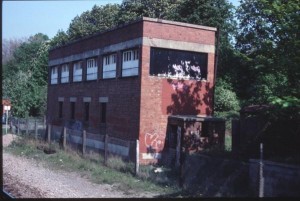 A list of GWR has been published and the are 43 boxes listed and they were located as follows:

The Southern Railway ARP signal box design was similar to a new signal box design they had introduced in the latter half of the 1930s but featured square, instead of rounded, corners to the structure, and a more substantial roof but with no overhang. Some were fitted with wooden window frames, but others were fitted with a mix of metal and wooden frames. Around 30 ARP design signal boxes were built between 1940 and 1949. Of these Chiswick, built in 1944, was derelict built still standing in 1997, and Gomshall, built in 1941, was derelict built still standing in 1998. The last operational example was closed in September 1990 at Point Pleasant Junction (at Wandsworth), where it had been built around the original structure in 1940 which was then removed. 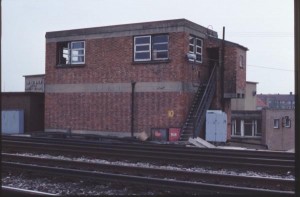 The London, Midland & Scottish Railway ARP signal box design was fitted with an “Evanstone roof” designed and manufactured by Messrs Evanstone of Riddings. It was made of a pre-cast reinforced concrete roof 13″ thick at the front and rear with a fall to the centre for draining rainwater, waterproofing being provided by bitumen, two layers of felt, asbestos, and chippings. Pre-cast concrete “Evanstone beams” were used for the operating room floor, and unlike the other companies who tended to fit wooden staircases, in most cases a pre-cast concrete staircase was provided. Most of those built were fitted with metal window frames with concrete cills, lintels, and mullions. Of the “Big Four”, the London, Midland & Scottish Railway was the one company that seemed to adhere to the original design most of all, but even they built some non standard ARP design signal boxes. Around 50 ARP signal boxes between 1939 and 1950. Of these Broom West Junction built in 1942 was derelict but still standing in 1997, Cold Meece built in 1941 was derelict built still standing in 2000, Crewe South Junction built in 1940, and Dunham Hill were derelict but still standing in 2002. Crewe North Junction built in 1940 is preserved as a museum. Crewe Coal Yard built in 1939, Greetland, and Wellingborough Junction signal box.Wigan Wallgate built in 1941, Watery Lane (at Dudley) built in 1942, Crewe Bank (at Shrewsbury), Thornhill built in 1943, Runcorn built in 1944, and Liverpool Lime Street built in 1948, belong to Network Rail were operational at the start of 2003. A final example remains at Wapping Goods in Liverpool buried when the cutting it is located in was filled in with rubbish! 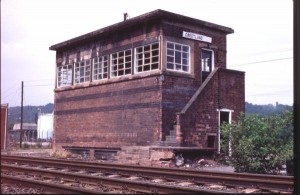 Greetland Signal Box, Halifax, built with a brick instead of concrete staircase 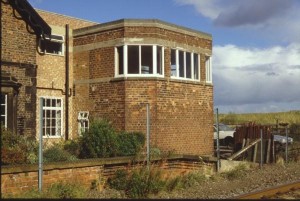 Goldsborough Signal Box, Yorkshire, which after closure was used as a garage. 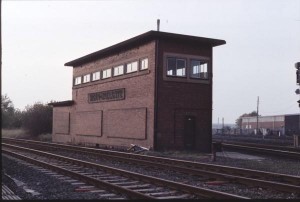 Wigan Wallgate Signal Box, one of three signal boxes built by the London, Midland & Scottish Railwayat Wigan which did not adhere to the company’s ARP design. 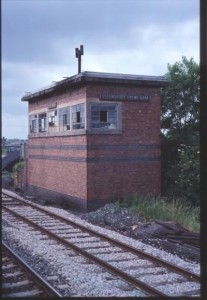 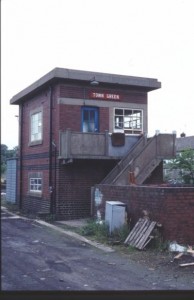 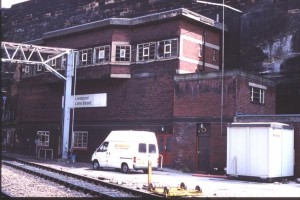 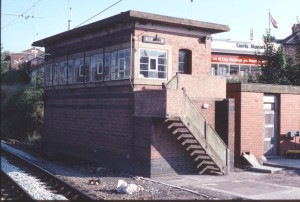 Runcorn Signal Box. A London, Midland & Scottish Railway ARP design.
Note how part of the concrete staircase has not stood the test of time and has been replaced by brick. 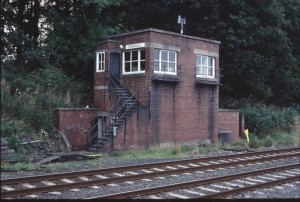 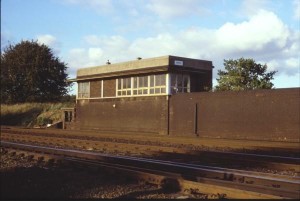 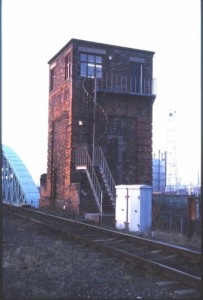 Hull River BridgeSignal Box, Kingston upon Hull, which was rebuilt by the London & North Eastern Railway along ARP lines after bomb damage in 1940.

GWR remaining examples at the start of 2010 could be found in a derelict state at Burghclere and Lansdown Junction. The box at Highclere has been renovated.

SR remaining examples at the start of 2010 could be found in a derelict state at Chiswick and Gomshall.

LMSR remaining examples at the start of 2010 could be found in a derelict state at Broom West Junction, Cold Meece, Crewe South Junction. Crewe North Junction in use as a museum. Crewe Coal Yard, Wigan Wallgate, Watery Lane (at Dudley), Crewe Bank (at Shrewsbury), Thornhill, Runcorn and Liverpool Lime Street are operational Network Rail. A final example remains at Wapping Goods in Liverpool buried when the cutting it is located in was filled in with rubbish!