Whilst strolling along Kalamanki Beach, Zakynthos the day after I arrived in Zante imagine my surprise when looking up from a particularly interesting geological feature – a quartz dyke – to discover a Pillbox perched precariously on the cliff edge above. Based very approximately on a cross between a Type 24 and a Type 23 plan, the structure would seem to be mass concrete rather than reinforced. The loopholes are similar to the pillboxes found in the Canary Islands, much too big and inviting enemy fire in rather than trying to keep it out! 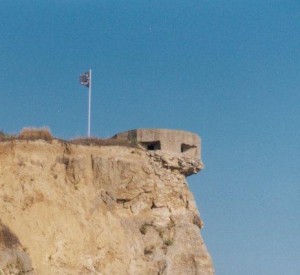 The inside of the structure is circular in plan with a shelf around the wall to rest guns and ammunition on. Set into this shelf, behind each loop, was a wooden plank, presumably to make it more comfortable for the occupants to lean on when firing their weapons. As can be seen from the photo there are no loops facing inland. 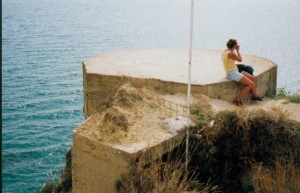 Inscribed into the cement is what I assume to be the constructors names and or units. Unfortunately, due to coastal erosion around half of the pillbox now hangs over a 150ft drop and much as I like to know as much of the story of a pillbox as possible  I was not prepared to take the chance of climbing across to read the inscription! However, I was able to make out the date (24XII43), which suggests that the constructors were German and were probably very grateful to have finished this arduous construction job the day before Christmas. The initials ‘MG’ also suggest that the pillbox was intended for machine guns rather than rifles. Can anyone translate the word above ‘MG’? 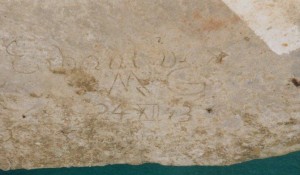 The German Army invaded and conquered Greece (or at least the lowlands) in 1941 and as they did not leave the islands until the end of the war, one can be fairly certain that this is their handiwork, even though it does not follow the normal designs used by German engineers.

Around 500m away and slightly inland is what I am sure is I am sure is a heavy machine gun pillbox. Unfortunately, the pillbox is on private land protected by a high fence of ‘weldmesh’ and barbed wire and some of the most vicious undergrowth that I have ever encountered. I was only equipped with sandals and shorts and so quite unsurprisingly I was unable to get to it! However, inspection by binoculars indicated a large bunker, possibly 5-6m square with the loophole being a semi-circular extension giving up to 180 degrees field of fire for a heavy machine gun. The design was not unlike a few pillboxes found in the south of Devon (England).

Though this pillbox is set low into the ground, its location on top of a small hill leaves it very exposed to an attackers fire.

Typically, none of these pillboxes would seem to offer any realistic chance of offering anything more than a token defence against a serious attempt to land on either Crystal Beach or Kalamaki Beach.

A note from Martin Buren on J Hellis Question:

‘I can read the German words “Erbaut von” that means “built by”. By this way the initials MG are probably the initials of the constructor and do not mean “machine gun”.’