Sound mirrors are large acoustic deflectors, used for early warning of approaching aircraft.
Unlike the earlier Semi-Spherical sound mirrors of the South Coast of England, this mirror is in the form of a stone built parabolic wall, 225 feet in length.

It’s known locally as Il-Widna, Maltese for “the ear”.

A series of these walls was planned for the defence of Malta, but owing to the early development of radar this was the only one to be completed. It is orientated towards Sicily. Trials showed that it was effective at a range of over 25 miles, although operators needed to be highly trained before these levels of sensitivity could be achieved. 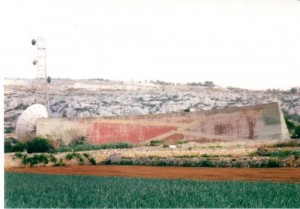 The first photograph shows the face of the wall, upon which can still be seen the remnants of its original “field boundary” camouflage. Although highly visible from ground level it is remarkably effective from height. 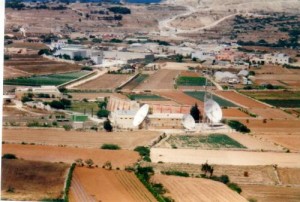 The second photograph shows the butressed rear and the control room at the centre back, note the remains of the camouflage, red in this area.

Maghtab (properly written with the h crossed in the manner of a “t”) is approximately four miles NE of Mosta, about a mile from the coast.

The Site is surrounded by high-security fencing, in order to protect not only the sound mirror, but also the sattelite installation of MaltaCom, the island’s telecom company.