Grey Point is located in the village of Helen’s Bay off the main Belfast to Bangor road on the coast of Belfast lough east of Belfast. It is tucked a little out of the way but is reasonably sign posted on Fort Road. 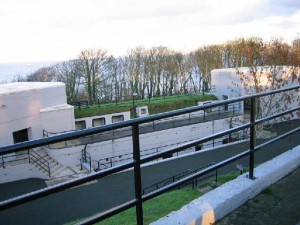 Grey Point was built between 1904 & 1907 on land bought from the Marquis of Dufferin & Ava for £8400. Two six-inch breech loading guns were mounted and tested during 1907. During the First world war, the fort was manned by the Antrim Royal Garrison Artillery(Special Reserve). Between the first and second world wars, two of the search light emplacements were built and several other modifications carried out within the fort.

During the second world war as in the first, the role of Grey Point was to protect Belfast Lough from Naval attack. When a ship entered the Lough it would have been contacted by coastal defence to make itself known. If there was no answer the ship would have been signalled ‘heave to or be sunk’. If the ship still maintained its course or again failed to reply, a plugged round would have been fired across the ships bows. If there was still no response the next to be fired would have been an explosive shell. 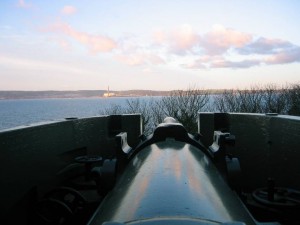 During the war regular target practice was carried out by the gunners. A tug from the Clyde towed a barge a mile behind with a chequered target. Twice a week the gunners fired at the target. Local residents had to be warned to open their windows and doors to prevent damage due to the blast. Reports from those stationed at the fort would suggest that the target was usually missed! 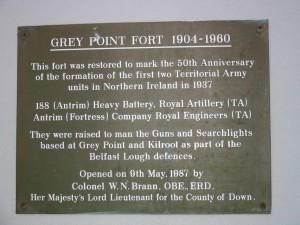 Shortly after the outbreak of the second world war a merchant ship the ‘E. Hayward’ entered the lough blissfully unaware of the change in conditions. When it failed to respond to a recognition signal a plugged round was fired across her bows. This was the first and only shot in anger from the fort.

These were built at the time of the original battery. It was established to house the Master Gunner or the permanent staff responsible for maintenance of the armament. It is now a private residence.

This housed the generator for the searchlights and internal lighting at the fort. Used for storage 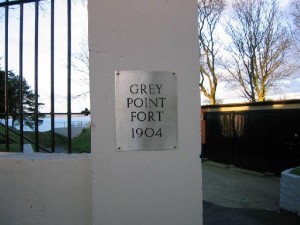 The gates into the fort were the only entrance the walls were originally surmounted by a tall iron fence known as the un-climbable fence. The fence along with various trenches around the fort still visible today.

The Battery was armed with two 6-inch breech-loading, Mark VII 100 feet apart, with angled reinforced concrete glacis sloping to seaward. Originally the guns were mounted ‘en barbette’, that is firing over the top of the parapet, but gun-houses were added in 1940 to give protection against air attack. On the parapet and under each gun platform were a series of shell recesses which contained the immediate supply of ammunition. The reserve was below ground in the Magazine. 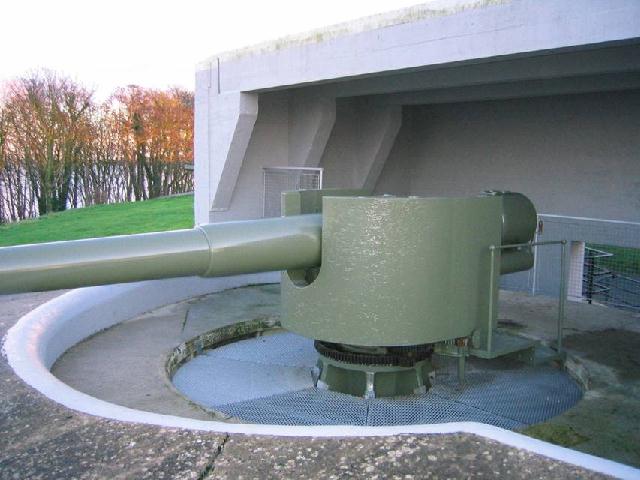 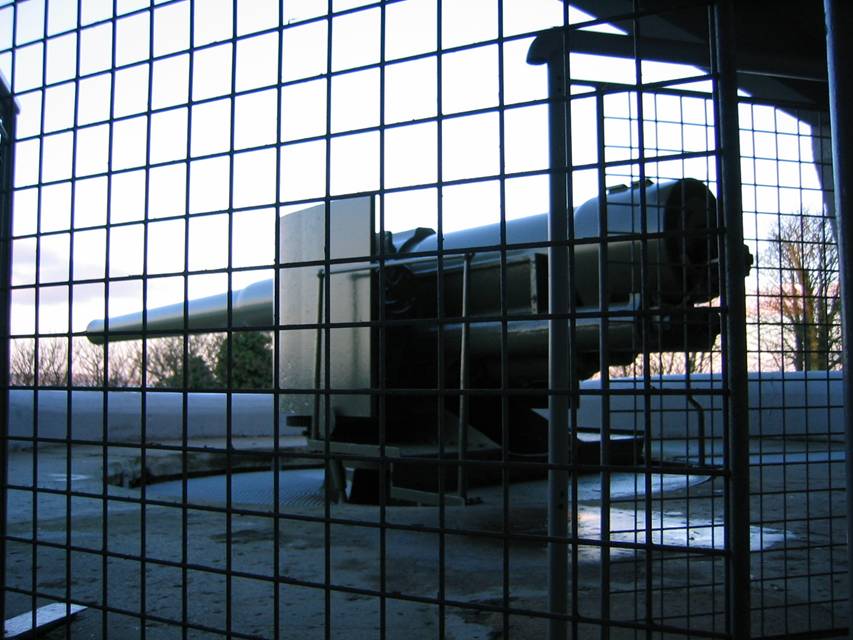 And sent up to the gun floor in a manually operated lift. Below ground are the shelters.

Were crews on duty were quartered, ready for instant action. 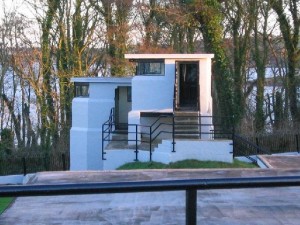 The battery observation post was the tactical head quarters of the battery commander. He had a clear view of his guns and their fields of fire, and could pass orders to both guns and searchlights. On the fore shore, in front of the guns, there are three Searchlight Emplacements. No11 and 13 were built in 1936 & No12 in 1940 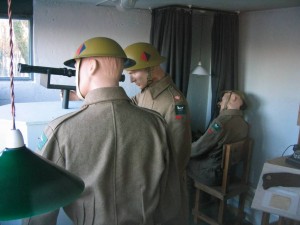 The fire command post was the tactical headquarters of the fire commander who had operational command of the batteries at Grey point, Killroot(directly opposite side of Belfast lough from grey point), Orlock (between Groomsport and Donaghadee on county down coast further east from Grey Point) and Magilligan (guarding the entrance to lough Foyle in county Londonderry)

The camping ground south of the fort is now covered by houses.

During the war the Battery was manned by 188 Heavy Battery Royal artillery with Royal engineer support. When the Coastal artillery was stood down the engineers became 591 engineer Sqn who were part of the Airborne division that landed in Normandy. The battery was closed in 1956 and became derelict it was passed to the department of environment in 1971 and put under management of Crawfordsburn country park. In 1987 they began to partially restore the Fort assisted by the local Territorial Army Royal Engineers regiment 74(Antrim Artillery) Regiment RE(V). It was opened to the public in 1987 to mark the 50th anniversary of the formation of the first 2 Territorial Army units in the province. An honour guard was provided by both 74 (Antrim Artillery) RE(v) and 102 (ULSTER) Air defence regiment Royal artillery (V) both recruited locally. 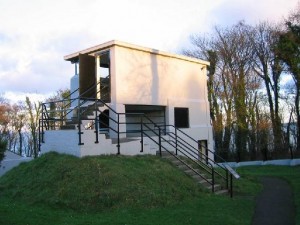 When the Battery closed the Guns and all ancillary equipment were removed or scrapped so for many years there no Guns in the battery and only a ring of bolts showed were they had been. 2 guns of a similar type were traced in the Irish Republic and these were donated to the site by the Irish Government. They were transported from Cobh in county Cork by lorry and the first was installed in 1993. When the mountings were swung over the ring of bolts they fitted perfectly. The second gun was installed in 1999. Various pieces of ancillary equipment is stored in the command post buildings including rammers, sights etc.

The Gun and search light control has been partially restored and a mock up of the observation post has been created. On the ground floor a mock up of the telephone exchange has also been created. On Display in the OP is various artefacts connected with the fort and the units which served there. There is also a history of the fort and its uses which include as a naval signal station. It also covers the use of Belfast Lough as an assembly for one of the landing forces for the D-Day Landings. The search light emplacements are empty. 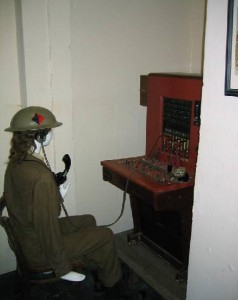 The Shelters have been partially converted into public lavatories. The shelter on the left and right are locked and the window boarded up. The Magazine and lantern rooms are the same. It would be nice to see these restored and opened. The Guns are in excellent condition and the breech mechanism’s work and are chained and padlocked. The doors that covered the shell and charge recesses are missing.

The site is well worth a visit. The sister site at Killroot doesn’t exist any more and the orlock position was an emergency position and no longer exists. At Magilligan there is still evidence of the gun positions and the Martello tower is still standing with the WW2 attachments. Not sure if the tower is open. The Gun positions are on the dry training area of the army range complex in front of the prison.

Along the coast there are some pillboxes near old RAF bases on the Ards peninsula.