I am a member of “The Coast Defense Study Group” in the USA and a resident of the Island of Oahu in the Hawaiian Islands.

I am curious as to whether or not your group has come across any cast-metal turreted pillboxes in the U.K. in conjunction with defenses of Yank bomber bases. The pillboxes were manufactured by the Union Casting Division of the Blaw-Know Company of Pittsburg, Pennsylvania, U.S.A., and reported to have been emplaced from Bermuda to the Far East.

I have attached two photographs showing an example found at Sitka.

The pillboxes were buried in the ground and entered via the circular corrugated metal tube through a circular opening in the wall of the pillbox, and able to traverse 360 degrees via a hand wheel. 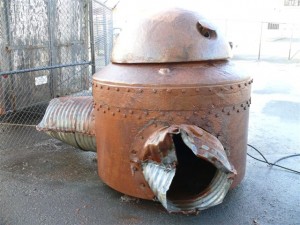 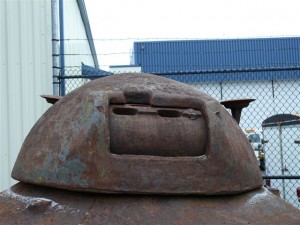 These two photos depict the extant example found at Sitka, Alaska. Photographs identified as Turret-VW2 and VW3 depicted a sole example imbedded in the ground outside of a security fence of a Naval Communications and Munitions Depot on the Island of Oahu, Hawaii. 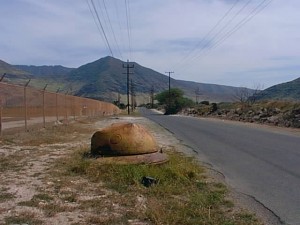 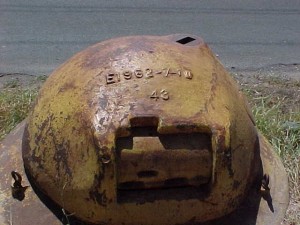 The cast metal pillboxes also include an example located at Shemya Island in the Aleutians. So far I have recorded several on the Island of Oahu in the Hawaiian Islands, one at Eastern Island, Midway Atoll, and one each at Sitka and Shemya Island, Alaska. The cast metal turret or cupola of one example on the Island of Oahu was manufactured by the Blaw Knox’s Union Casting Division of Pittsburgh, Pennsylvania, USA, which was identified by a trademark cast on the top of the turret.