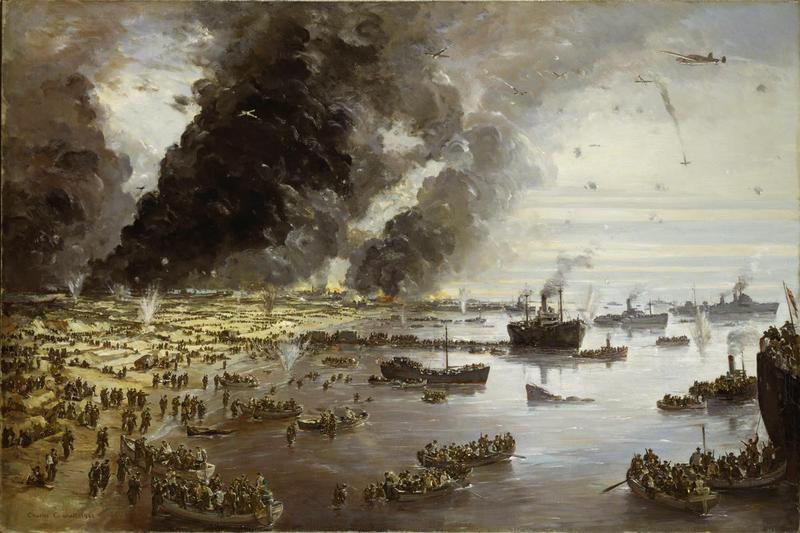 On the left of the painting stretch sand-dunes covered with groups and long lines of khaki-dressed troops. Small boats loaded with troops move out from the sea shore towards larger vessels to the right of the work. Across the centre troops queue along a makeshift jetty towards the waiting ships. In the left background huge black smoke clouds from the town fill the sky. Aircraft fly amongst explosions from anti-aircraft fire, one plane plummeting towards the right horizon.
The Withdrawal from Dunkirk, June 1940. © IWM (Art. IWM ART LD 305) IWM Non Commercial Licence

In June 1940 the unimaginable happened: the mighty French Army, that had held the line against Germany in 1914, collapsed in a matter of weeks under the weight of the Nazi blitzkrieg. Britain faced Germany alone: even worse, her Army had had to abandon most of its heavy equipment on the beaches of Dunkirk. She faced an enemy which had the potential of attacking from the sea and the air. Britain asked the question not ‘will the enemy come?’ but ‘when?’

A citizens’ army, the Local Defence Volunteers’ (later called the Home Guard) was established but it had to wait several months before it was adequately armed and clothed (Dad’s Army!). Its primary roles were the spotting of enemy paratroops; the defence, by whatever means were available, of its home patch, and to act as the eyes of the Regular Army. Only after 1940, with better arms (mostly from the US) and training did its members gradually take over from the Army the role of defending the country.

The British High Command had seen how German armour had been able to move and attack seemingly at will on the Continent. It appeared in the summer of 1940 that only by defending the vulnerable coastline and by creating a series of defended anti-tank ‘stop lines’ (the GHQ line protecting London and the Midlands was the most important one), and urban ‘anti-tank islands’ could the enemy be delayed sufficiently to enable the under-equipped reserves to be rushed to meet them. If the RAF was defeated in the skies over Britain then Germany might land troops by sea or by air at will. We now know that Germany prepared such a plan for the mounting of an invasion in September 1940, Operation Sealion.

The stop lines utilised existing barriers such as rivers or canals or, where these features were not available, ant-tank ditches were dug. A key element in the British 1940 defences was the now-familiar pillbox. Circular concrete defence posts had been built around or near the coasts of southern and eastern England in WW1; these resembled the small cardboard boxes used by dispensing chemists to dispense pills at that time and the name stuck. In the summer of 1940 a series of drawings was produced by the War Office Fortifications and Works department to enable thousands of concrete (later, with shortages of wooden shuttering and concrete they had a brick skin or were built entirely of brick) pillboxes to be built. The most common design was the FW3/24 hexagonal pillbox, designed to house infantry armed with rifles or Bren light machine guns, with loopholes in all six faces for vital all-round defence. Where the pillbox was part of a linear defence position, in a stop line or part of the coastal defences, the pillboxes would often be sited so as to give interlocking fire or to enable them to give each other covering fire. Where they were to be sited was carefully planned by army reconnaissance teams.

The construction of the pillboxes was in the hands of army units, especially the Royal Engineers, or with local civilian contractors. They were designed principally to protect actual or potential crossing points on the stop lines (these had to be kept open to enable withdrawals or counterattacks to take place); to defend beaches and harbours; and also vital installations such as airfields or radar stations against enemy airborne attack. That their tactical life was short (one to two years) does not detract from their significance today: had an invasion occurred their defenders would have been expected to fight to the last round.

Other designs of pillbox could accommodate the few 2pdr anti-tank guns available after Dunkirk, and the stop-gap 6pdr anti-tank gun (originally a naval gun but last used in WW1 tanks), whilst another design held the Vickers medium machine gun. The metal, rotating Allan Williams Turret appears to have been designed to be situated in restricted positions, such as on narrow ridges, whilst the retractable Pickett-Hamilton Fort was designed to be installed by the runways of airfields.

In addition, Britain did its best to hamper any German advance. Bridges were prepared for demolition, anti-tank and anti-personnel mines would be sown, barbed wire protected the heavily camouflaged pillboxes, fearsome flame devices were installed (called fougasse) as ant-tank traps, whilst the Home Guard would have done what they could with Molotov Cocktails and rifles against the Panzers, fighting to the last round. A massive network of vehicle and anti-tank obstacles were prepared so that roads and crossings and even railway lines could be blocked with steel rails and concrete cylinders, especially around the anti-tank islands. 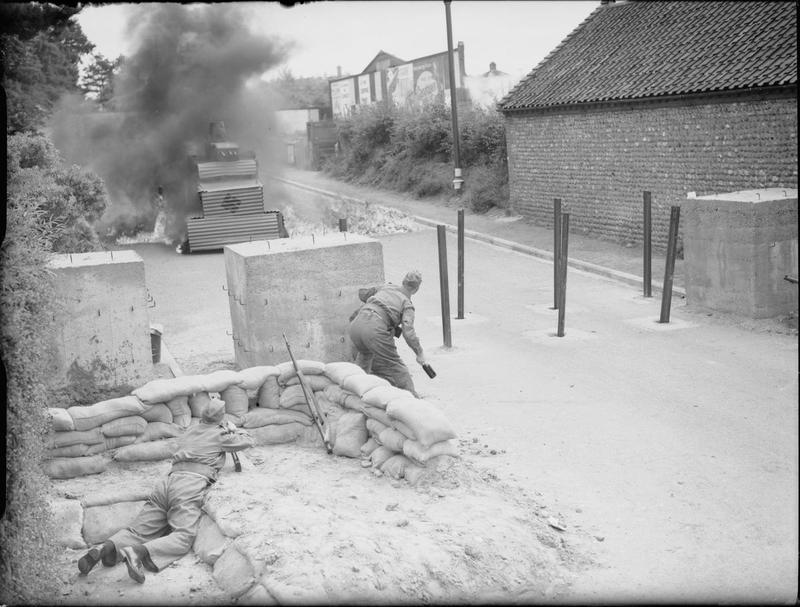 Members of the Home Guard stage an attack on an enemy ‘tank’ – in reality a corrugated iron mock-up – as they defend a concrete road barrier with petrol bombs, August 1940.
THE HOME GUARD DURING THE SECOND WORLD WAR. © IWM (H 2722) IWM Non Commercial Licence

Lakes and reservoirs were obstructed to prevent enemy seaplanes from landing. To hamper the landing of boats on beaches miles of scaffolding was erected on the shoreline. Inland railway guns and heavy artillery were moved into place to supplement the guns protecting harbours, ports and beaches. Behind the beaches, stay behind groups of men accommodated in underground Operational Bases and called the Auxiliary Units, were trained to harass the invader’s rear. A further ‘secret army’ of men and women, the Special Duties Section, would act as radio-equipped ‘spies’ if the invader landed.

We now know that the RAF was not defeated and that Hitler and elements in his High Command were lukewarm about the idea of such a risky seaborne invasion: as well as the RAF Britain’s powerful navy was still intact and this had the ability to destroy any enemy armada. In the autumn of 1940 Hitler quietly postponed ‘Sealion’. By 1942 the concept of stop lines and fixed defences had had its day: in its place was a more fluid strategy with HG manned anti-tank islands and defended localities: only where pillboxes fitted into local defence schemes was their use retained. The pillbox by this time was felt to be too vulnerable and might invoke in its occupants a too defensive mentality, rather than an aggressive, counter-attacking stance.

The risk of invasion or of enemy sabotage attacks persisted until the winter of 1944 when the Home Guard was stood down. By then it had become a well trained and reasonably well-armed army. However, little remains of this organisation’s ‘footprint’. The most common reminder of the presence of Home Guard activity is the survival of the Spigot Mortar ‘thimble’, a concrete cylinder which supported this rather crude anti-tank and anti-personnel ‘artillery’ much used by the Home Guard.

So, what is left to remind us of these apparently last ditch defences? The infantry trenches and anti-tank ditches were filled in and many of the obstacles and pillboxes were cleared away, even before the war had ended. The most iconic reminder of the frightening but stirring times of 1940-1941 is the pillbox, several thousand of which remain, but often now neglected and overlooked even by the heritage bodies.