I have been aware for sometime of Pillboxes on some of the other Canary Islands but, I have to say that I was particularly pleased to find an example on the sea front in Playa de Las Americas. 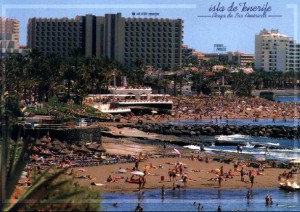 I spotted this postcard in a local shop and was very surprised to see a another pillbox located just along the beach. Unfortunately, since this postcard was produced this particular pillbox has been destroyed to make way for a new promenade.

However, about 500m south an absolutely huge example stands on the edge of the shoreline.

The walls are about 20ft in length and are reinforced with iron bars. The concrete has a relatively smooth finish at its lower levels but on its roof volcanic rock/pebbles have been used to try and blend its outline into the beach.

Perhaps the most unusual feature is that it only has Two large Loopholes. These face long the beach to the North and provide enfilading fire along its length. Located on the land side of the structure is a 6ft by 3 ft door. Although blocked by a metal grid the entrance still gives a good insight to the internal layout. This is where I was most surprised. Internally, there are two individual rooms, each having one of the two loopholes. However, what is particularly striking is the thickness of the external and internal dividing walls. They are somewhere in the region of 6ft thick, making the structure `shell proof`.

Overall, I was impressed with the size of this pillbox and the effort that had gone into its construction. However, I couldn’t understand why there are only two loopholes with both the `seaside` and the southern beach aspect being left unprotected.