There are two well preserved – but frustratingly unrecorded – pillboxes and one ruined one about 2km North of the town of Altea, (Valencia Region), in the area known as Cap Negret.

The design of the two survivors is as good as, or maybe better than, any of the modified British WW2 ones, with a pistol-ported doorway leading down into two chambers divided by a blast wall. The strange double bow front would give each chamber a wide field of fire to front and side, even if one chamber were knocked out. The front walls and roof are massively thick – so much so that the frontage is quite high, even though the defenders would be partly underground.

Small shards of rock were added to the roof of the southerly pillbox to camouflage it from the air – although the rock chosen is from some distance away and doesn’t match the stone of the beach, down which it is slowly moving. Nearby are four possible anti-tank cubes, with a twin, uncamouflaged pillbox commanding the next beach north (about ten minutes walk at low tide, or five minutes if you leave the beach and follow Calle del Ministro). Both structures have been filled with stones, reportedly by the local authorities to stop children entering, but it is possible to crawl into the first one on your stomach. The second is inaccessible and the entrance has been used as a dog toilet, but both interiors can be checked visually from outside through the large embrasures. 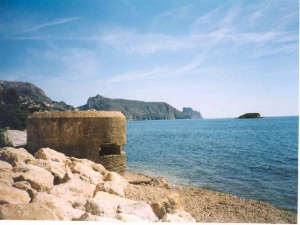 Both pillboxes have a characteristic rounded doorway leading down into the interior and formed from the hopelessly fragile but thin aerated bricks apparently widely used along the coast (and maybe elsewhere in Spain?). This same feature can be seen in what looks like a third defence structure between the other two at the Northerly end of the beach. Remains are fractured and dispersed, suggesting that it has moved into the water that half submerges it at all times. There are no embrasures visible above or below the waterline, but it appears to be either a very badly damaged third pillbox, or at least a smaller version. 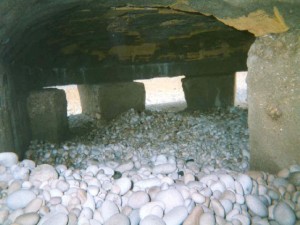 Interior of left hand chamber, Southern Cap Negret pillbox. Poor quality of materials is evident in the support on the right and the exposed bricks. Filling both pillboxes with stones seems to have helped preserve at least the visible parts of the interiors.

Large stones have been set in the top and it has the same hugely thick walls. On the two intact ones some lateral iron rods can be seen where weathering has occurred around the embrasures but if this one is typical then the need for the thickness is explained: it isn’t built from ferro-concrete but from cement with pebbles mixed in and here and there the hopeless bricks (which can be seen in the roof of the interior pictured). 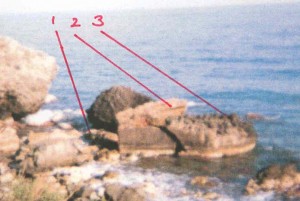 The three main sections of the middle structure. Smaller pieces litter the area. Part 3 is the roof, with camouflaging rocks inset, which make handy toe and hand holds if exploring when waves are breaking against it. However, speaking from experience, suggest taking care and decent footwear as the safer looking rocks on the shore may not be as secure as they look

Hopefully there will be a move to open up these two structures, one of which is conveniently opposite a new children’s playground and community centre. And hopefully a local enthusiast will know the date and reason for their construction – I asked around but found no answers. 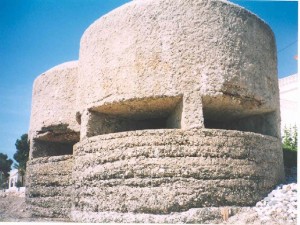 Until then for an outsider they are something of a paradox: of excellent design and terrible construction, their survival presumably a testament to their sheer bulk and the mild weather on that part of the coast. The poor construction might date them to the era of the Republic, which controlled the area for most of the Civil War, but the Republican forces surely had a history of throwing up hurried defences, not building pillboxes that seemed to have learned the lessons of World War 2. And would they have feared a seaborne landing, and if they did, what would these few too-widely spaced defences have achieved? If they are Franco-era, then who was the supposed enemy, and what was the point of building them so badly? If they pre-date either government then the designer produced a structure that if it had only been well built and integrated with other defences, would have anticipated the need for defence against a beach landing using naval bombardment and accurate bombing, and would surely have been worth imitating in 1940.