At the end of January 2012 Rob Hewer who leads the National Trust team that looks after the North Downs Way invited us over help to carry out some essential clearance work around and in a type 24 pillbox in the grounds of Netley Park House near Shere in Surrey. 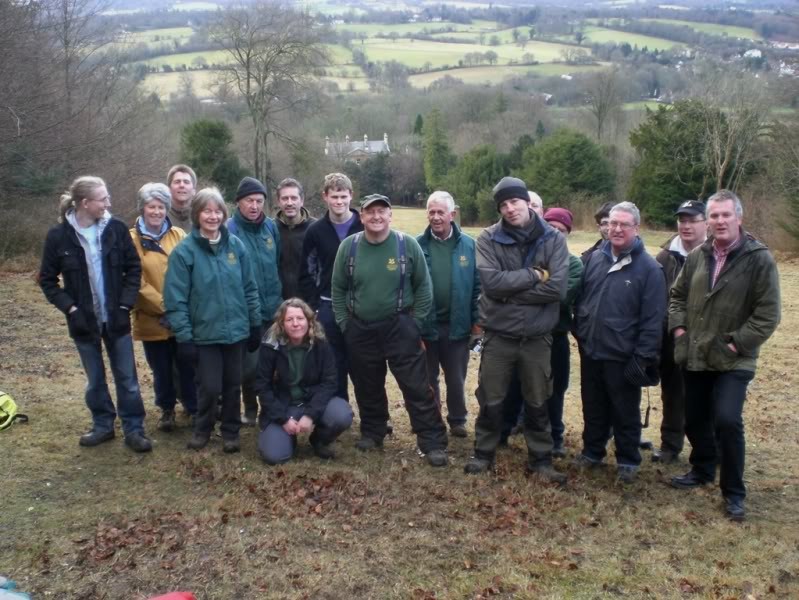 The Volunteers with some quite well known faces! Rob Hewer [centre] with cap.

We all met up at 9.30 and planned to work and finish at around 3.30, two breaks where taken during which hot tea and coffee was kindly served by some of the ladies that were part of Robs team , fortunately the day was cold and sunny and very luckily we avoided the rain that was supposedly forecast. 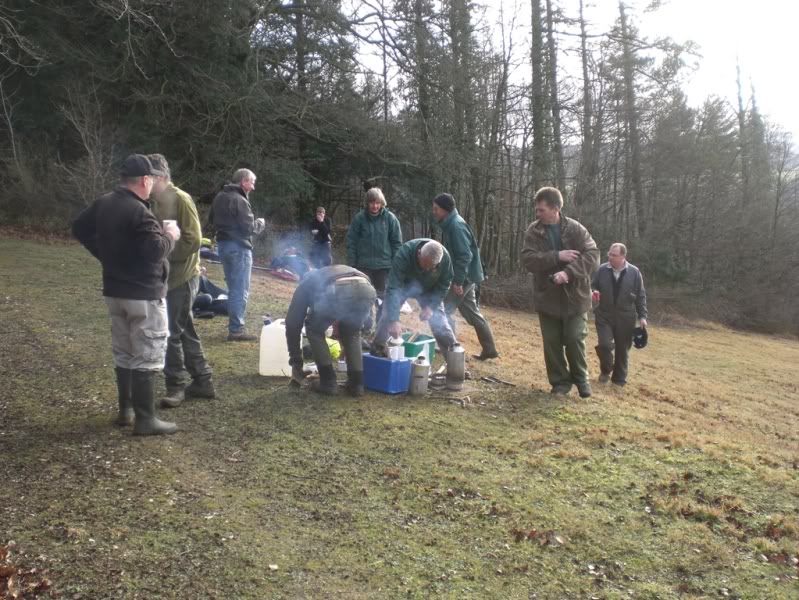 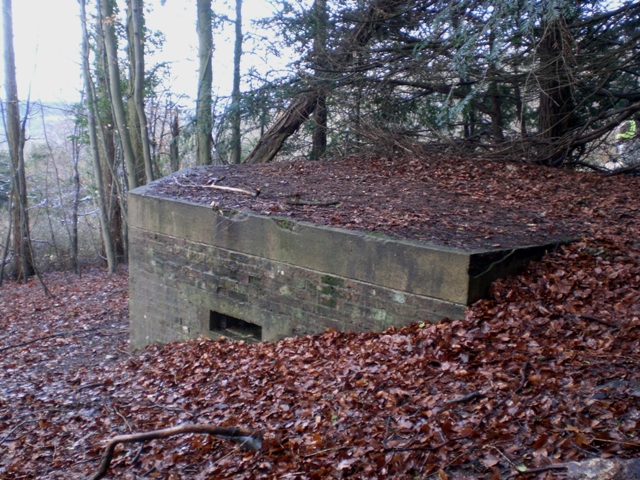 As we found the type 24 that morning.


The Type 24 shellproof pillbox is dug well into the sloping incline above Netley House, the defence is accessible from the rear via a manhole size opening that drops down immediately into the rear of the box, originally there were rungs buried in the shaft wall but these had since been removed. 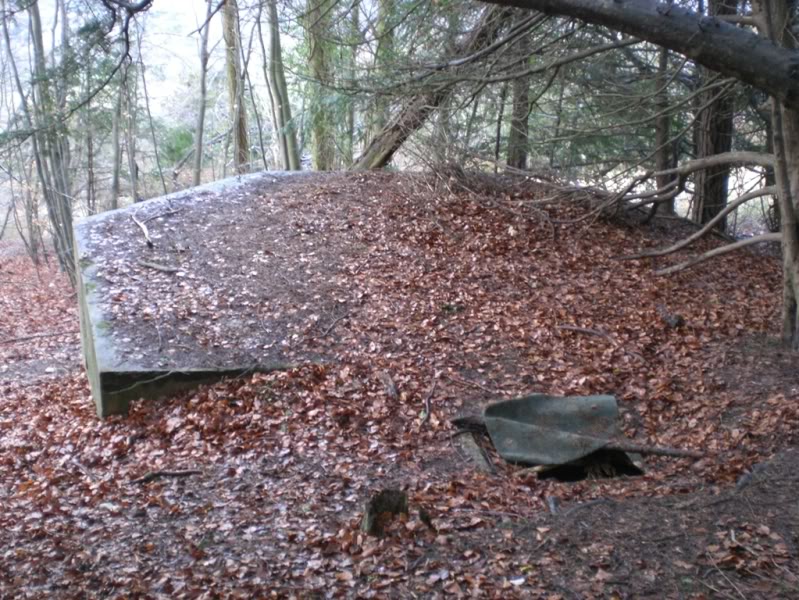 As we found the pillbox that morning. 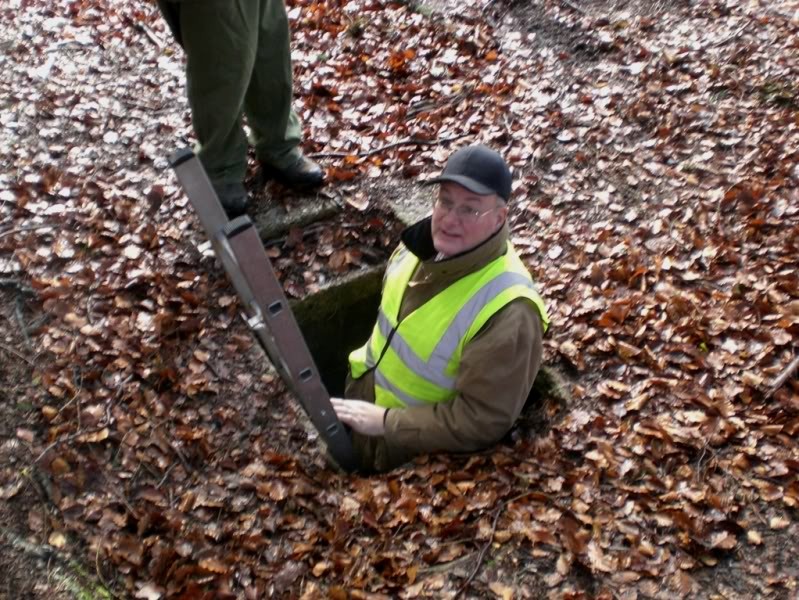 Mike descends into the Pillbox.

The sunk in defence was surrounded by many trees one or two of which had been there a while before the pillbox was built; the area was to be cleared all around the defence with Rob doing the chainsaw work.
A team of volunteers helped in removing the wood and branches which were quickly consumed on a well burning fire managed by NT ranger Amanda, this helped to keep everyone warm on a particularly cold morning. 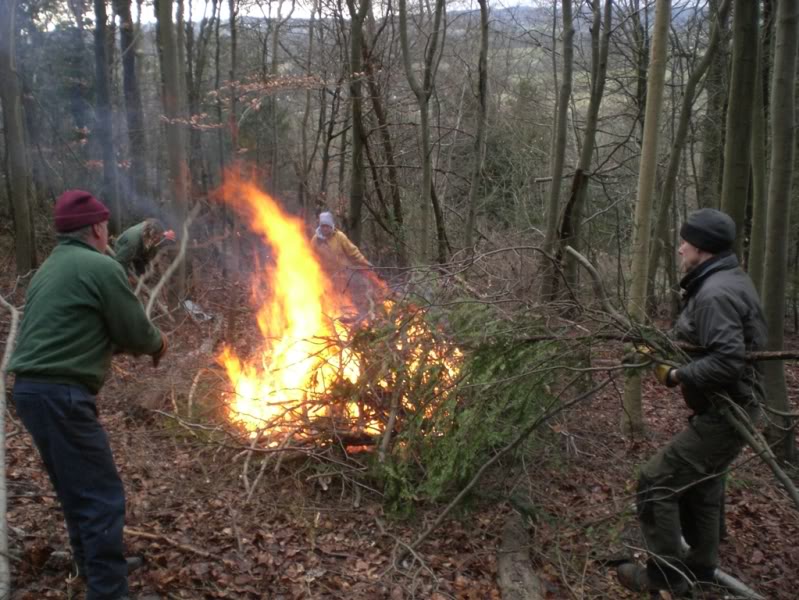 A good fire was got going to burn the waste. 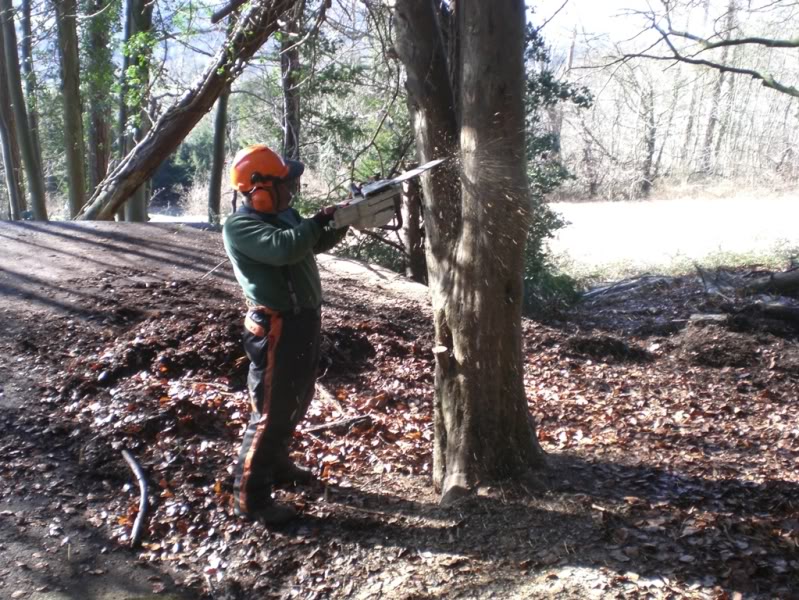 Rob cutting into the Yew Tree behind pillbox.

Our team of six concentrated on clearing the roof and entrance to the type 24, which was first accessed by Mike Hopton [seen descending into its depths] via a ladder provided by Rob. Once inside the pillbox interior is excellent, dry but full of sandy soil, the walls and ceiling are still very clean with original whitewash covering everything; there was no deterioration on the brickwork or signs of flooding. 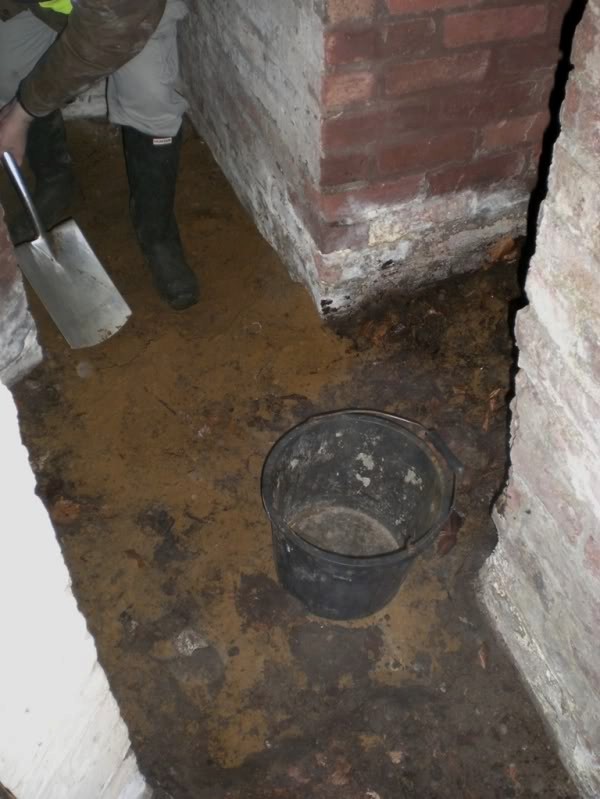 Sandy soil being shovelled out from inside. 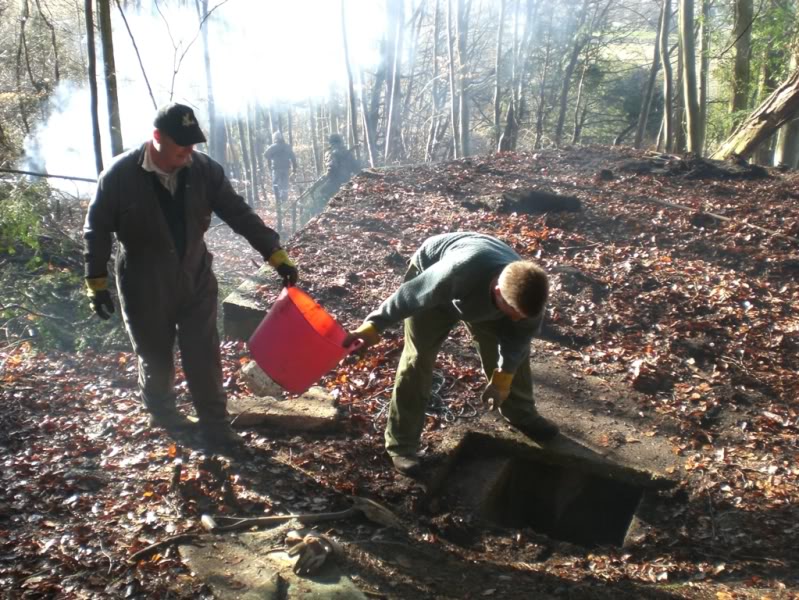 Passing the bucket, Stuart and John.

Tony, Dillon and Mike through the Loophole.

Showing the inside space had been used previously we discovered dozens of rubber chicken and a plastic skull as well as a few bottles and candles.

The entrance passageway and some of the floor was covered in sandy soil which over the last 70 plus years had made its way in from the shaft top.

To start with Mike, Tony Clark and I shovelled and removed this via a system of passing buckets up to John Bennison who quickly despatched and spread the soil over the ground outside the box.

While excavating the inside Tony found one of the original iron rung steps, all of which were removed long ago. 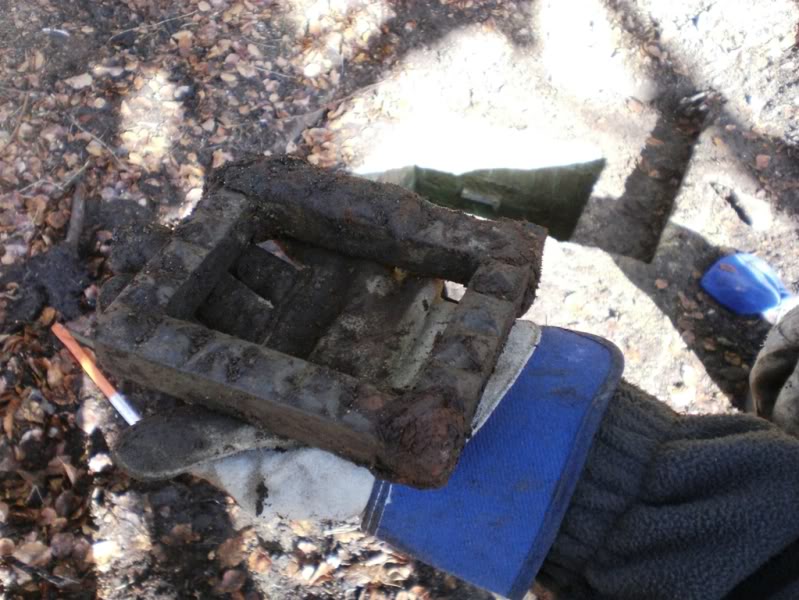 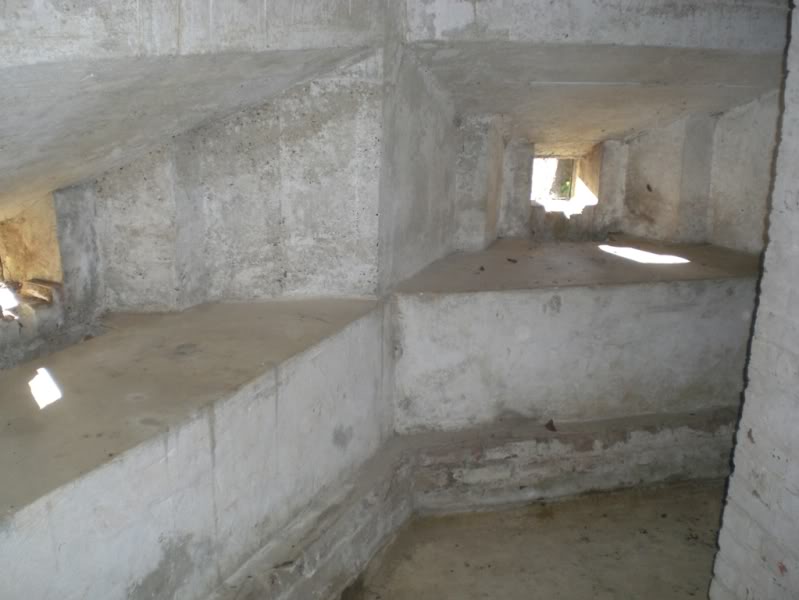 The interior as we left it. 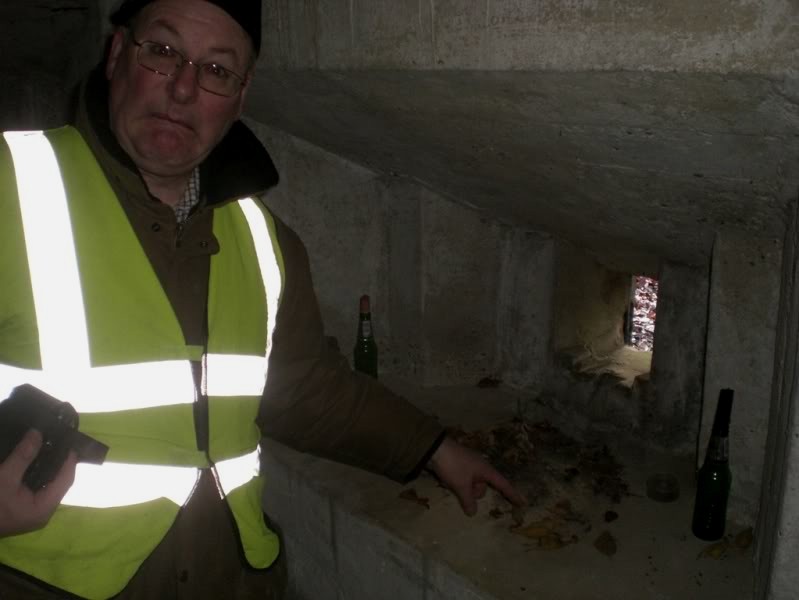 Mike points to the Rubber Chickens.

Taking a break around 11am we swopped roles and helped Stuart Bridger and David Ottway who were both busy removing the mat of roots, leaf mould and soil from the roof of the pillbox, eventually we all Stopped for lunch at 1pm and had a welcome sit down, taking in the sun and admiring the wonderful view across from the North Downs towards Shere. 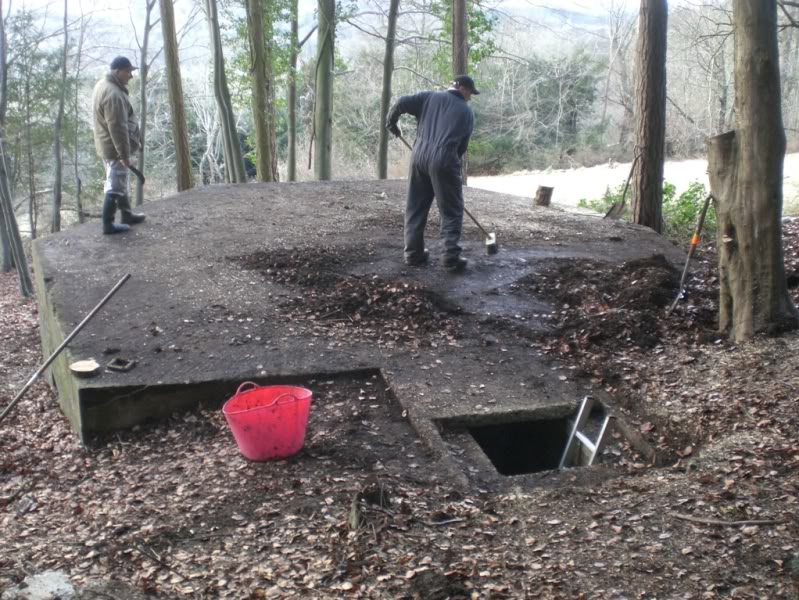 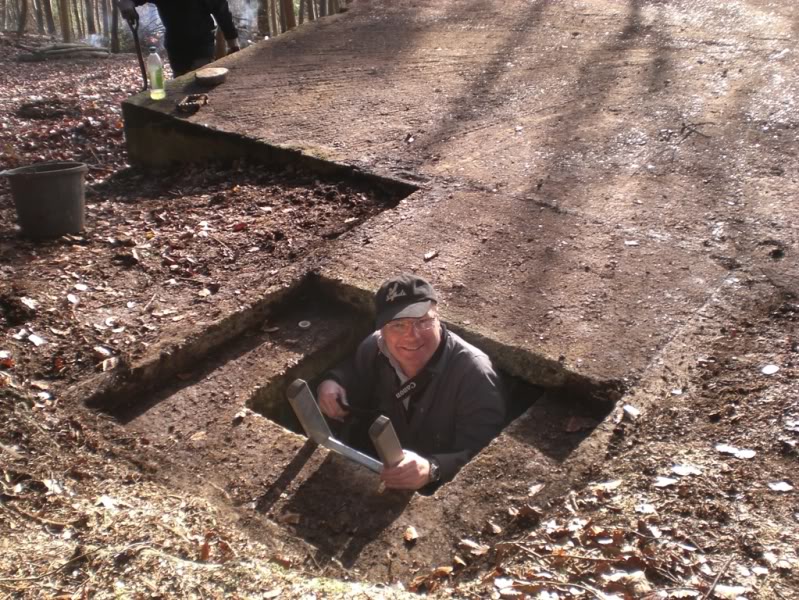 Stuart emerges from below. 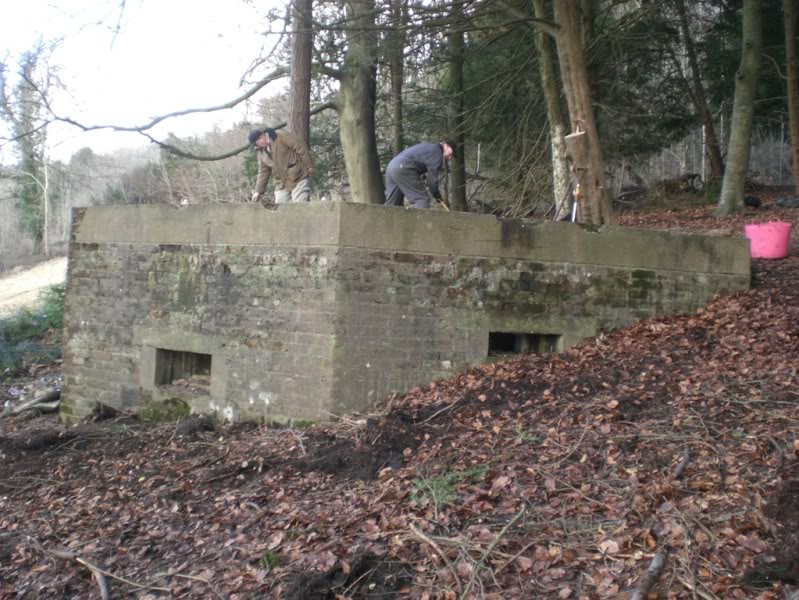 
After the break young volunteer Dillon completed the interior of the pillbox sweeping and passing up buckets of the remaining sand. We all helped  finish off clearing the loose rubbish away to be burnt and with Stuart, John, Tony and Mike working especially hard and just before 2.30 everyone came to a halt, gathered around and took the opportunity to visit the immaculate interior while several of us answered questions about the type 24 and the defences in general. 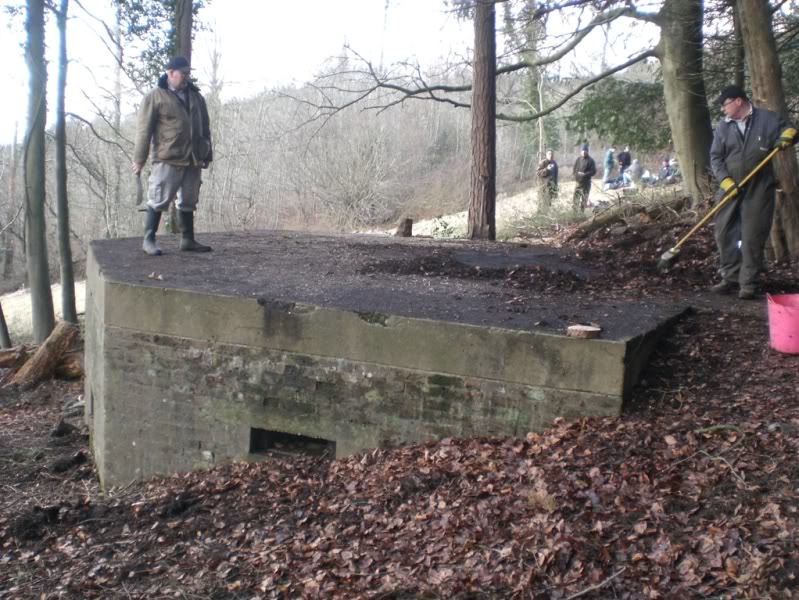 Mike on top of box as we prepare for break. 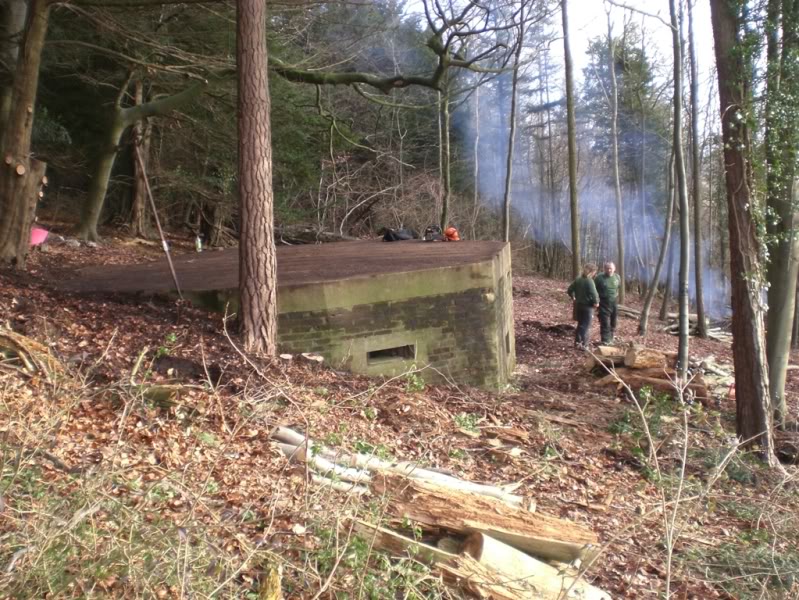 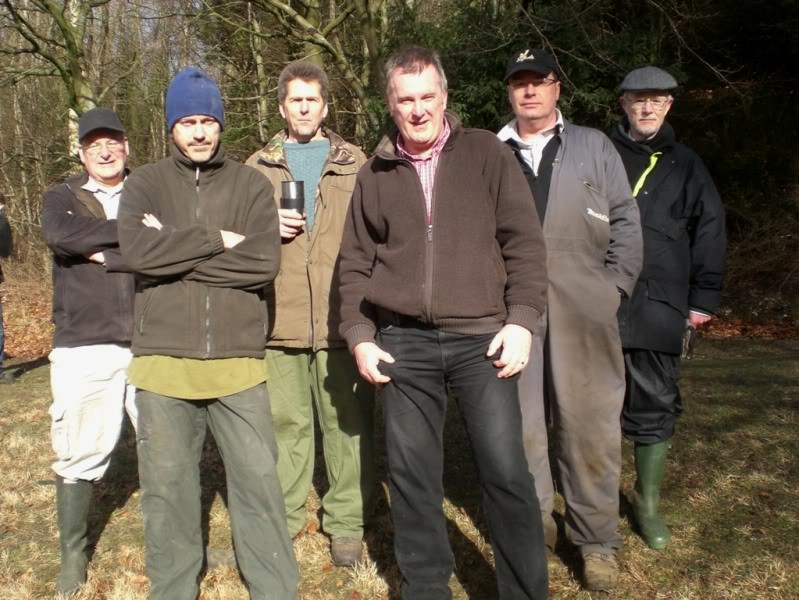 With a short amount of time left the six of us headed off to find a couple of more shellproof pillboxes which will be receiving attention at a later date, one of these was difficult to find but survives in excellent condition and has a massive concrete foundation.

This was a very enjoyable day with thanks to Rob Hewer and the National Trust for inviting us to help with the worthy project. 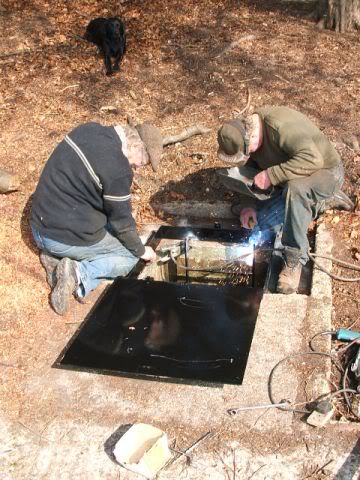 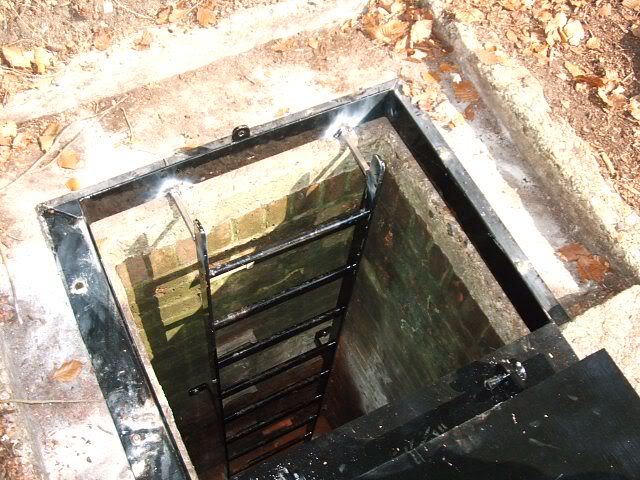 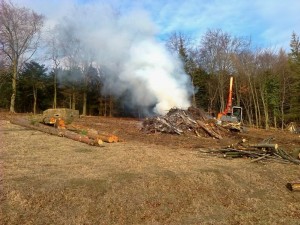 Contractors finishing off the tree work.

Since January 2012 Rob has had a metal trapdoor and ladder made by a local Blacksmith and fitted to the pillboxes shaft access, for safety it is padlocked, the immediate  surrounds  were cleared of larger trees by a contractor a few weeks later and my pictures taken in early February 2013 exactly a year later show how clean and tidy it all now looks.

The view from this excellent vantage point is fantastic and the pillbox can be easily visited if you are walking along the North Downs Way. 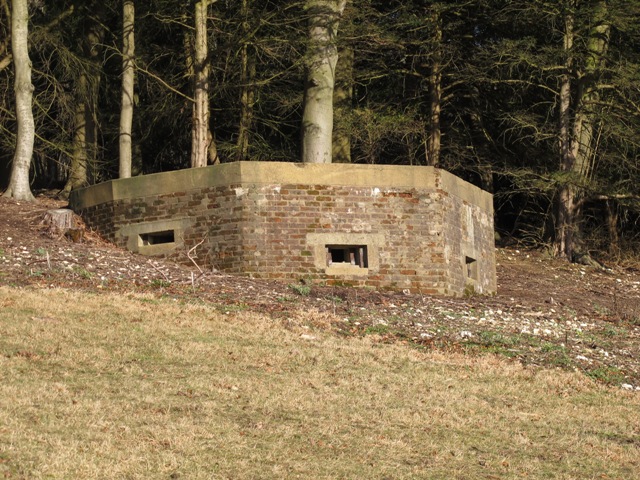 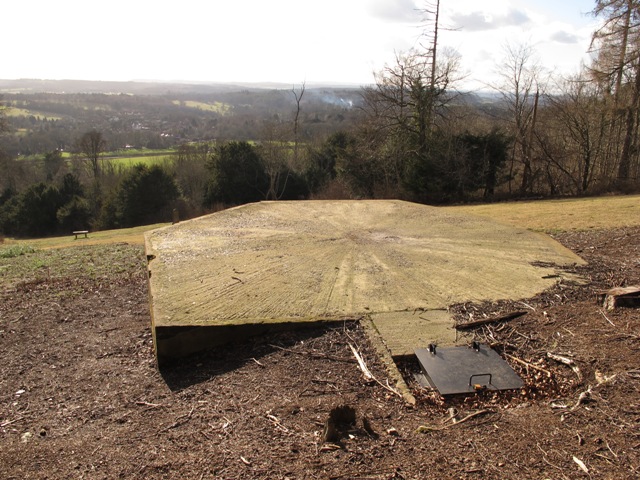 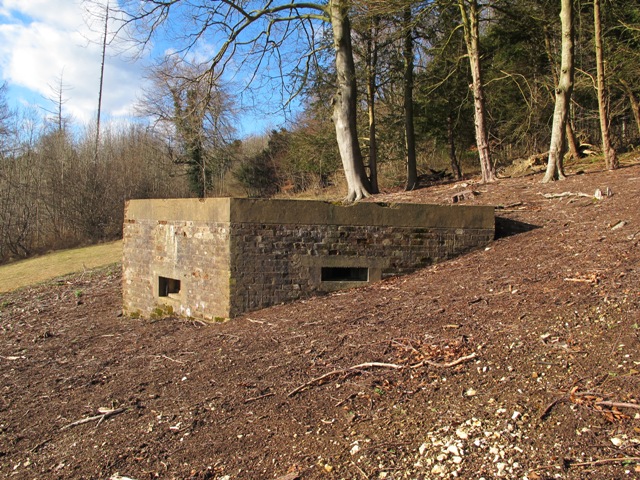 Thanks to Stuart Bridger and Rob Hewer for additional pics