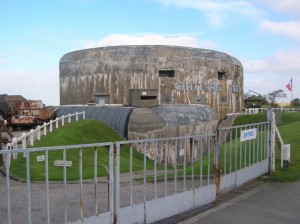 A ‘Beginners’  Guide for visitors

As a fairly regular Visitor to the Pas-De-Calais I decided one day to make a trip to France with the sole purpose of discovering the many Pillboxes and Gun emplacements which litter the coastline and make up the ,Atlantik Wall’.

Several trips later and it still hasn’t lost its appeal but I cannot help but think I’ve only seen such a small section. So I thought how daunting it was the first time I went and have decided to write a small “Beginners Guide” if you like to help coax more people to this fantastic and easily accessible wealth of…..well concrete.

You can break the Atlantik Wall tour of Calais into approx 4 different areas. 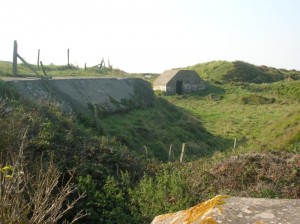 Cap Blanc Nez is a wonderful Nature haven. Its a very distinct landmark visible for miles around due to its large Monument on its summit.

The Concrete emplacements at Cap Blanc Nez are mainly a mixture of Observation Bunkers and Personnel Bunkers. It has a wonderfully diverse range of Bunkers and Pillboxes all situated on either the ridge or the 2 slopes. There are some fantastic views from up here so don’t forget your camera! There is a car Park at the base of Cap Blanc-Nez for the more adventurous or you can drive right to the summit but parking is obviously limited up there. 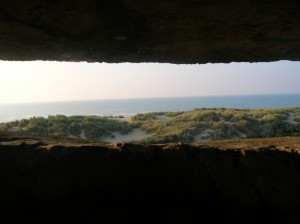 Wissant is a real gem of a coastal resort. You drive into Wissant from a country road and end up on a sand duned beach front. As you walk the promenade at Wissant you realise that the modern prom has been Incorporated into an Anti-Tank wall, itself very impressive. 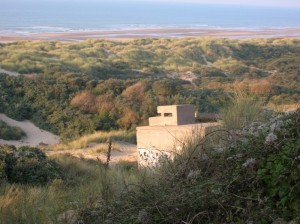 You may also notice that the local Yacht club has also Incorporated its watch tower on top of a German Gun Emplacement! As you look to the sea, to the left are several gun mounts and gun pits. These are now stranded on the beach due to coastal erosion which allows you to walk around them and really get an idea about the true size of such pieces. 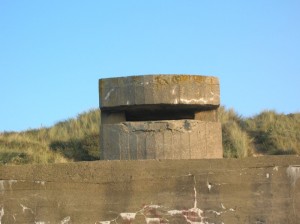 To the left of the beach amidst the dunes are several observation bunkers and a Gun emplacement which has also moved somewhat due to the movement of the dunes. All are easily accessible and well worth a visit. Looking out to sea and along the dunes, it really gives you a good impression of what the Allies would have faced had they Landed in the Pas De Calais. Taking this perspective you can see why the Allies chose Normandy.

In short this would have been some Killing zone and it is debatable if such a landing as D-Day would ever have been a success here. 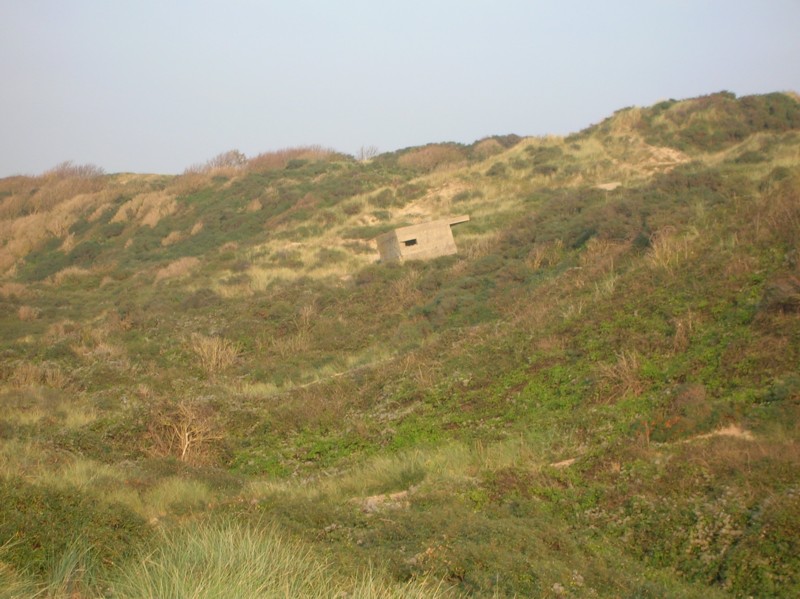 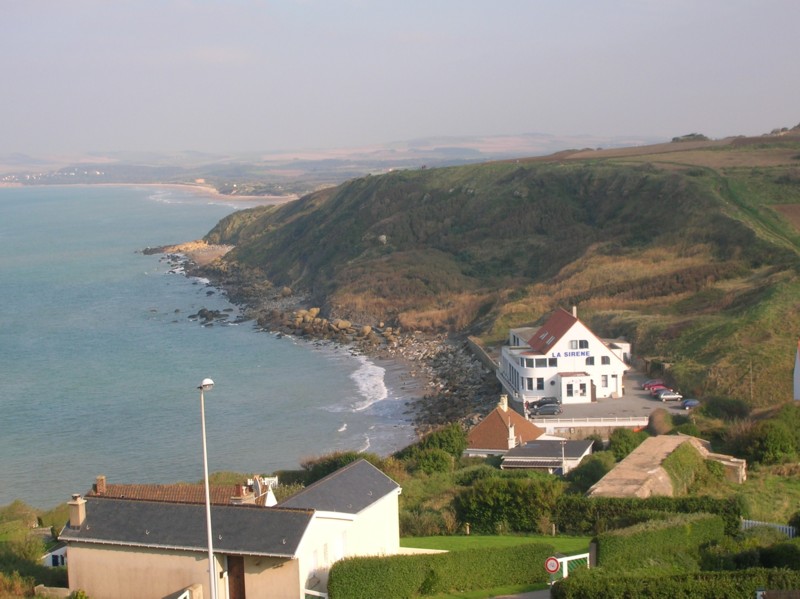 Cap Gris-Nez is a real mix and match of Concrete bunkers, Flak platforms, Observation Outposts and Control bunkers. In fact when you park up at the car park near to the present day coast guard lookout you can’t help but fall over them. A scenic path takes you on a loop of the cliff top and past many of the Emplacements. 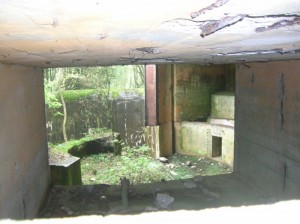 However, it is possible to see other sights such as the bases of the radar cupolas and also the very impressive Barracks. You can walk into the barracks and along some of the trench system which still exists today though you will be sharing them with sheep!

Batterie Todt was as its name suggests a large Gun Battery made up primarily of 4 major gun casemates or turrets each with a number of support Bunkers i.e. Ammo bunkers, personnel Bunkers and fire support/observation Bunkers. It took its name from Fritz Todt who was the head of the Organization Todt, the organisation who where responsible for construction of many of the Atlantic Wall defences. Its construction started in the Autumn of 1940 and it was declared operational in January 1942. In all the 4 casemates used some estimated 12,000m3 of Concrete each and an amazing 3,200 tonnes of steel between them. 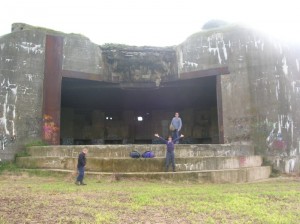 It was this battery that infamously shelled the Coastal towns of Dover and Folkstone throughout 1942 till its fall in 1944 claiming more than 40 lives.

The guns finally fell silent on the 29th September 1944 after a joint operation between the infamous Dover guns “Winnie” and “Pooh” and the Canadian North Shore Regiment. 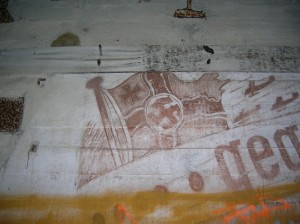 Today Turret 1 is a fantastic museum the Musée du Mur de l’Atlantique. www.batterietodt.com. It is full of both German and Allied artefacts and really gives you a sense of what it must have been like not only to serve in such a large Battery but also to have had to construct it.

As always it is wise to check opening times as it does close out of Season on certain days. Outside the Museum there is plenty of parking and also a wonderful little café. Great for a beer or glass of wine in the Summer months or a coffee or cognac for those colder months. It has a full menu so there is something for every palate, from basic les frites to the more adventurous le moules. (Chips or Mussels for those like me who last spoke French at School!). 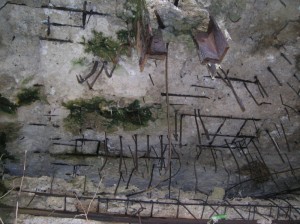 Once parked up turret 2 is within easy walking distance though be warned it is overgrown and normally very wet and slippery. Wellies a must! Turret 3 is situated on the edge of a small country road some 100 yards from the last but is fenced off to the public due to the fact it was blown up in an accident in 1945!! 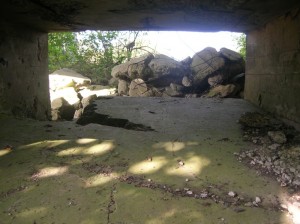 Turret 4 again is an easy walk and this is probably the most interesting of the 4. It is situated on the edge of a field and you are able if you so wish to walk in and wonder at its enormity. There is some original Graffiti still present inside and although this has been “added” to throughout the years it is still very impressive. Again torches and wellies a must. 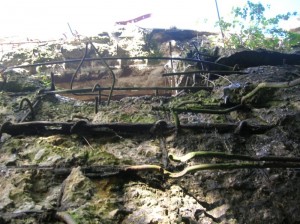 Just a note to say as with pillboxes in Britain one should always remember to be very careful whilst walking round such places. Debris can and does fall from the structures and there are various trip hazards. Also remember to stick to the roads and footpaths as this area is farming country. That said a ploughed field often throws up a whole host of relics but be warned a lot of what you will find is still live and dangerous so best left well alone!

Calais is so accessible and yet so often ignored or at best “Just a Port for Day trippers”.

P&O and Seafrance both operate Ferries from Dover and the Euro-tunnel terminal is just down the road at Folkstone. It makes for a great day out or weekend depending on pace. There are plenty of Hotels to choose from.

I mostly stay at the Hotel du Golf situated on the Calais beach front. www.hoteldugolf-calais.com

Its cheap and basic but very good value for money.

If you fancy something a little more Grandeur try the Hotel Normandy in Wissant www.lenormandy-wissant.com . It has an award winning Restaurant and the owner, Mr David Davies just happens to own the Batterie Todt Musee as well.

If you’re interested in Bunkers that’s some Real Estate!

Driving is the only real way to travel between the 4 sites. Its not as daunting as it seems but remember to check you have European Insurance Cover for your car.

You will also benefit from a good map. By far the best map of all is the IGN Blue Series map entitled “Calais Site Des Caps Foret De Guines” number 2103 ET.

It is the same as our Ordnance survey map and at 1:25000 scale shows most of the bunkers you will be visiting. You can order these maps via online web sites or from most bookshops like Waterstones. As its a “blue” tourist map its in the top 25 and you may be lucky to find one in stock.

Although not a guide as such Osprey Publishing do produce a book called (funnily enough) The Atlantic Wall. ISBN 978-1-84603-129-8

Although this book covers the Atlantic Wall from the Pas-de-Calais all the way down to the Bay of Biscay it still gives you a wonderful insight to the variations of Bunker design you will discover and there are many relevant photos of all the above mentioned sites.

All these are reasonably inexpensive yet offer a wealth of knowledge.

France is still cheap compared to the UK so a meal for 4 or a room for the night may surprise you! So now there is no excuse!! They even do Pet Passports!

Finally it pays to look in the papers for Ferry/Tunnel special offers. I Have never paid for a ferry yet…….Tesco Vouches are well worth a look!!!!!