The Westwall was a series of fortifications constructed between 1938 and 1940 along the western frontier of Germany between the Netherlands and Switzerland.

In WWII the Allies called it the Siegfried Line.

After Germany invaded Belgium in May 1940, the line was no longer garrisoned and was neither maintained nor updated (e.g. to house new weapons like the MG42 or Schwere Park Heavy Anti-Tank Gun). After the Allied Invasion at Normandy, the neglected line was re-activated and manned from about 10th September 1944 (just a few days before the US Army reached it!). It took until February 1945, following the failure of the German Ardennes offensive, for the whole of this section to be fully in American hands.

A nearby War Cemetery bears witness to the many lives lost in conquering the Wall.

These pictures all come from the area facing Belgium, to the southeast of Aachen. The section of the line here was designed to stop upto 36tonne tanks. To the east (rear) of the wall a full series of bunkers, shelters, observation posts and other fortifications were built. Pictures of these must wait until another visit! 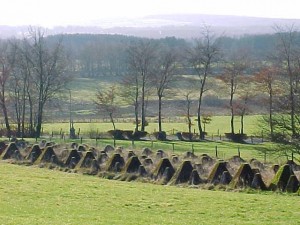 The Wall to the northwest of Simmerath, looking westwards towards Belgium which is about 1.5km away. 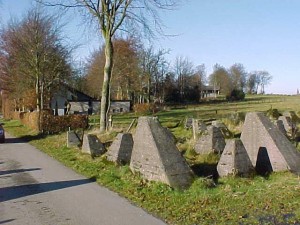 Standard 5 rows of `pimples` with the largest on the home side. 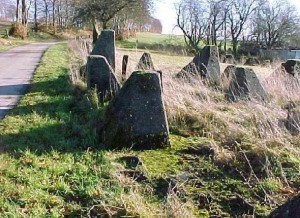 The remains of one of the tank-proof road gates. The girder supports are just visible in front of the left pimple. Such gates were constructed from tubular steel and had vertical hinges allowing them to swing across the road. Very few gates remain. 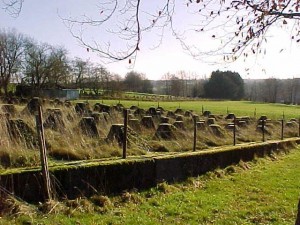 The front of the massive 1m x 1m longitudinal buried concrete bearer running along the line into which the forward pimples were cast. The posts supported barbed wire.
Behind this bearer are two similar parallel longitudinal bearers about 5 to 6m apart. These are now almost covered with soil.
The sharp angles in the Wall here may have allowed enfilade fire from dug-in anti-tank weapons along the front of the line. 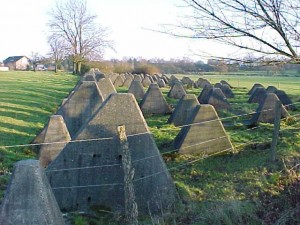 Another section of the Wall between Aachen and Roetgen.
Pimples within the obstacle were cast on transverse bearers, which were constructed between the 3 longitudinal bearers to form a massive supporting concrete grid. Some of these transverse bearers are visible in the forground. 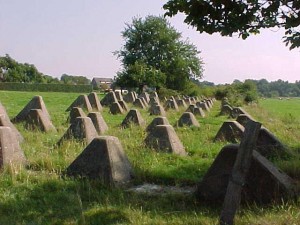 This photograph illustrates how the pimples were set in irregular patterns to maximise the effect of the obstruction. 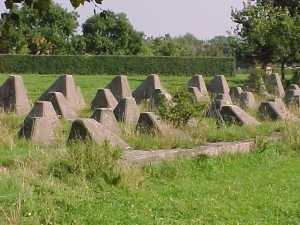 This picture shows the forward edge bearer on the same site. 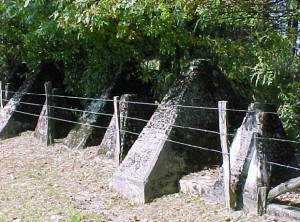 Located between Simmerath and Imegbroich, this site shows how the largest home side `pimples` (some 2m high) were staggered along the longitudinal rear bearer.
Additional smaller pimples were set in the gaps. 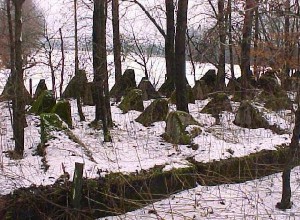 This picture shows the adjacent section under snow.
The skewed shapes of the pimples, which further enhances the obstacle, can be seen on the left. 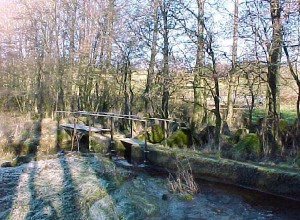 This illustrates the Wall spanning a small stream.
This view, looking from the West, also shows how the Wall has become totally overgrown with trees in many places. Nevertheless, the forward edge is still clear and is now a footpath.