I have recently visited the area of Lille again to look for pillboxes there. I have selected some photos for your site. Up to now I have identified the following types of pillboxes:

3) A 2-Pounder with the Entrance In A Straight Line with the embrasure. Both used for flanking and frontal fire. Many have one or two oreillons(E.g. D955 and Lesquin).

6) A Hexagonal pillbox with Four LMG embrasures (e.g. near Gruson).

7) A Hexagonal pillbox with One HMG and Two LMG embrasures (e.g. Bourghelles).

Some have an observation slit between the embrasures, other have not. These are types from which I have seen at least two pillboxes. Apart from that there are pillboxes which seem to be more rare:

1) The concrete shields for a 2-pounder at Hondschoote.

3) A pillbox for two flanking AT guns (No 2-pounders, probably French 25mm guns exchanged against Boys A rifles) with a 4m. width entrance.

West of Lille all pillboxes had a wooden shuttering and have a good finishing. More to the east you see also many pillboxes with a shuttering of corrugated iron. Sometimes you can see two identical pillboxes within 1 km of each other, but having a different type of shuttering. I must say that the quality of the pillboxes, in comparison with the nearby French Blockhouses, is generally rather poor. In the western part the finishing was given more attention, but the eastern pillboxes were poorly finished. You can clearly see the joints between the different layers. They didn’t use much reinforcement bars and hardly any armoured plates in the embrasures. I must say hardly, because I have seen pillboxes with a small armoured plate for the HMG and ones with an armoured embrasure for the 2-pounder. 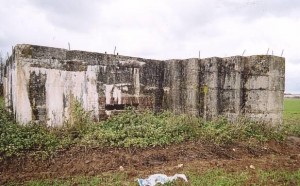 The particularity of this pillbox is that is originally built to hold a 2-pounder. 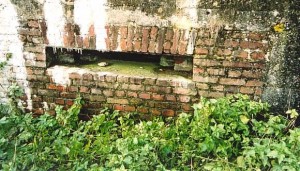 However, later both the entrance and the embrasures were made smaller with bricks and the armament was changed to a single HMG. 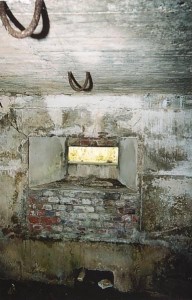 The embrasure seen from the interior. The niche below is typical for a two-pounder and held one of the legs of the carriage.

A small pillbox for one HMG and two LMGs. 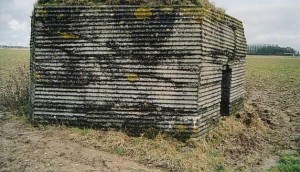 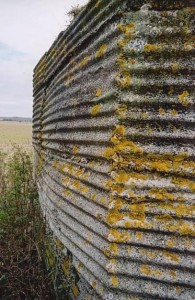 Here they have used corrugated iron as shuttering, but it seems that they have removed the supports of the shuttering before the concrete was totally dried out. You can clearly see consequences near the entrance. 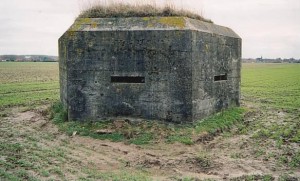 The same type as above, but this had a wooden shuttering. Hence the smooth finish. 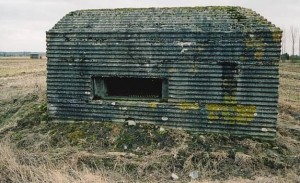 One of the embrasures of a pillbox with two AT guns.

These were not the standard 2-pounders, but guns with a two-legged carriage, probably French 25 mm AT guns that had been exchanged against  Boys AT rifles. 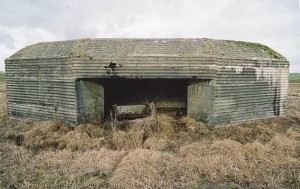 The entrance of the AT pillbox is quite large, more or less a shoot-through-type. 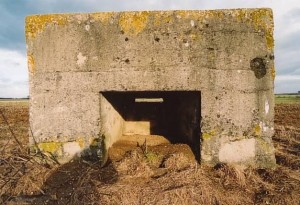 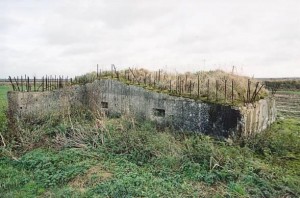 This is very rare, an unfinished pillbox with the reinforcement bars still sticking out. 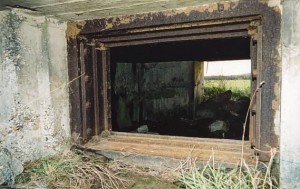 The armoured embrasure of a pillbox for a 2-pounder.

Any information on this type is welcome.

By the way every time I visit the British pillboxes in France I am always wondering why few people are interested in them.

Do you happen to know why even the British almost disregards their existence?

In the homeland they do excellent work to make an inventory and preserve them, but they neglect the ancestors of the British pillboxes in France.

You can even see it clearly in the book of Henry Wills which squeezes the description of pillboxes abroad to just a few pages.