Sunday the 13th of September 2009 was probably the first time the GHQ Line B pillboxes above Abinger Hammer had been manned with Home Guard since WW2. 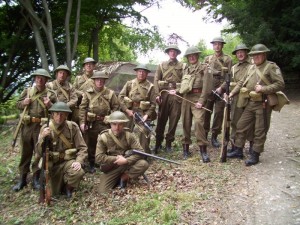 Surrey National Trust and head warden Rob Hewer had organised and arrange this special day with the 23rd Sussex Home Guard “re enactment group” under the “command” of Richard Hunt.

Visitors were going to get the chance to see how things would have appeared some 69 years ago when this country faced a real possibility of invasion. 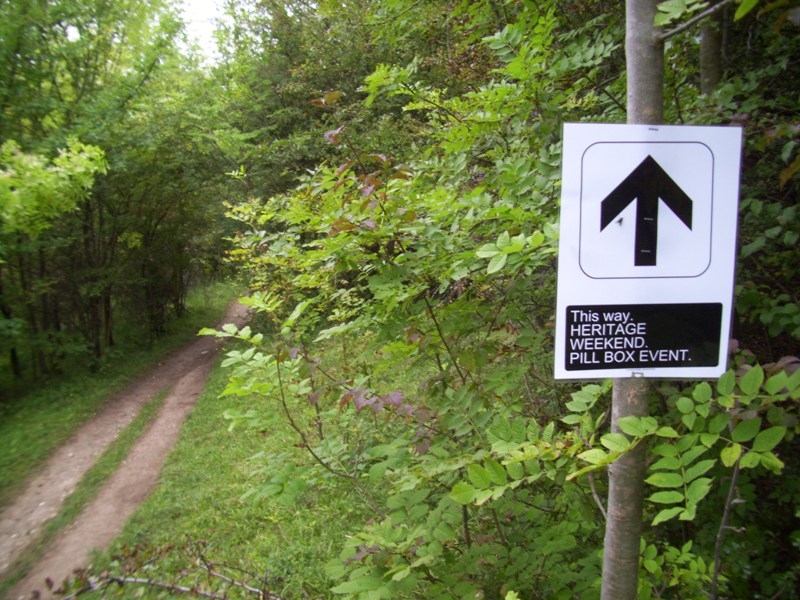 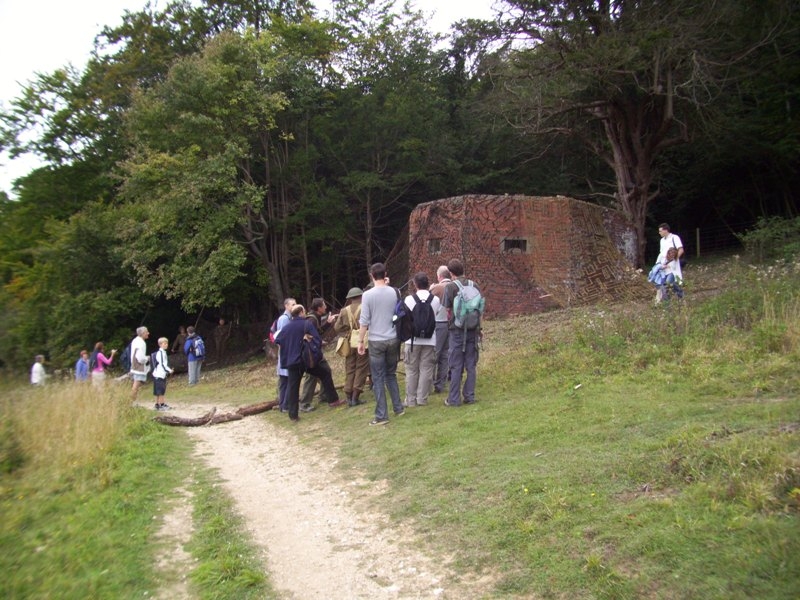 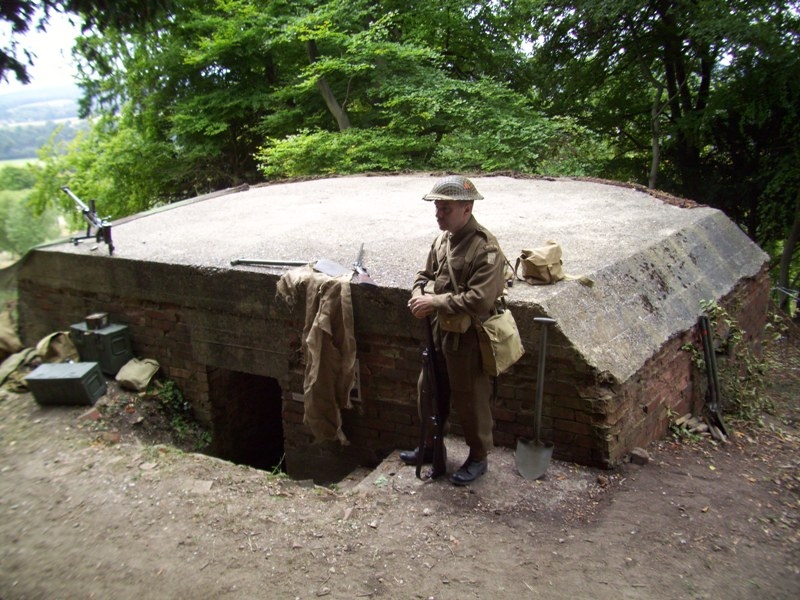 The soldiers were not only fitted out with authentic uniforms and equipment, but were also equipped with a wide choice of de activated weaponry, some of it now rarely seen outside museums . 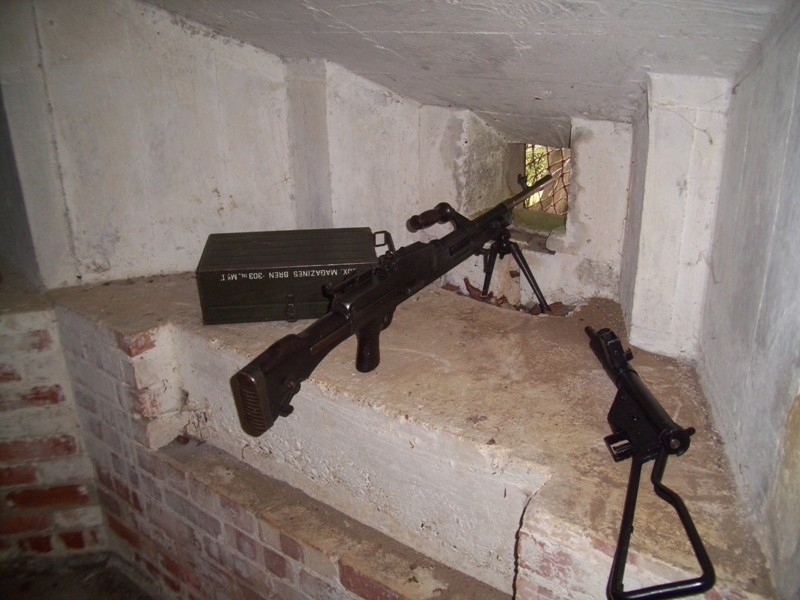 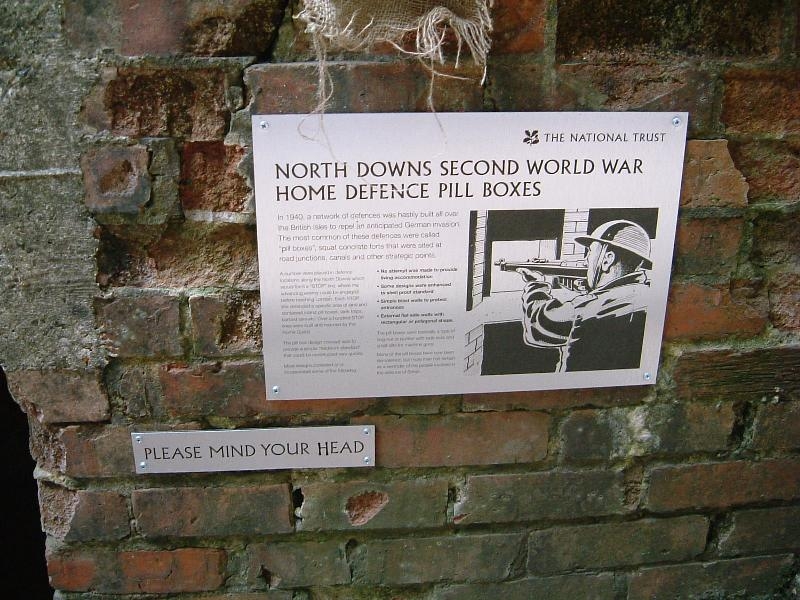 Historical Information board provided by the National Trust 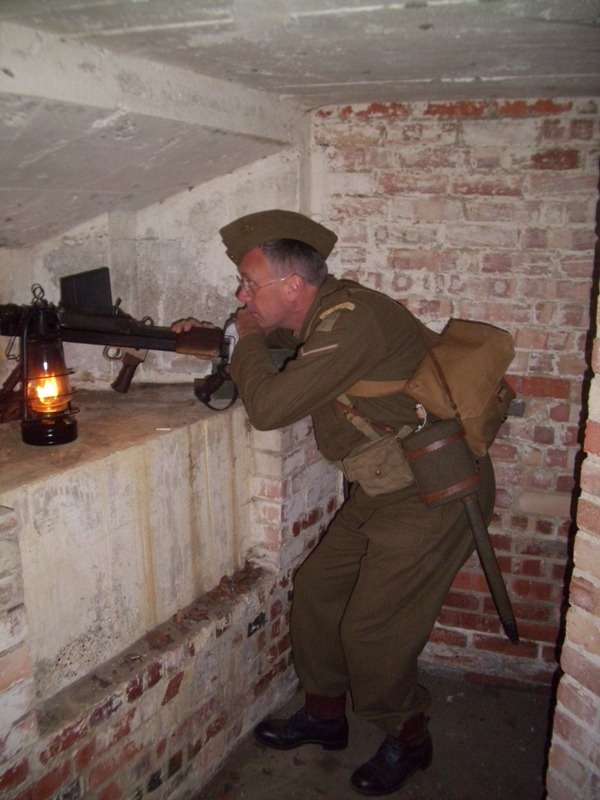 Boys AT Rifle at the ready

On the sloping Surrey hillside several of the pillboxes had been cleared of undergrowth and cleaned out by the National Trust grounds men, this enabled a range of equipment to be demonstrated and set up in a realistic scenario of wartime defence.

The two pillboxes used were both shellproof type 24 types, although these defences were only yards apart they were both connected by a period field telephone, each box was draped and camouflaged with appropriate period hessian netting. 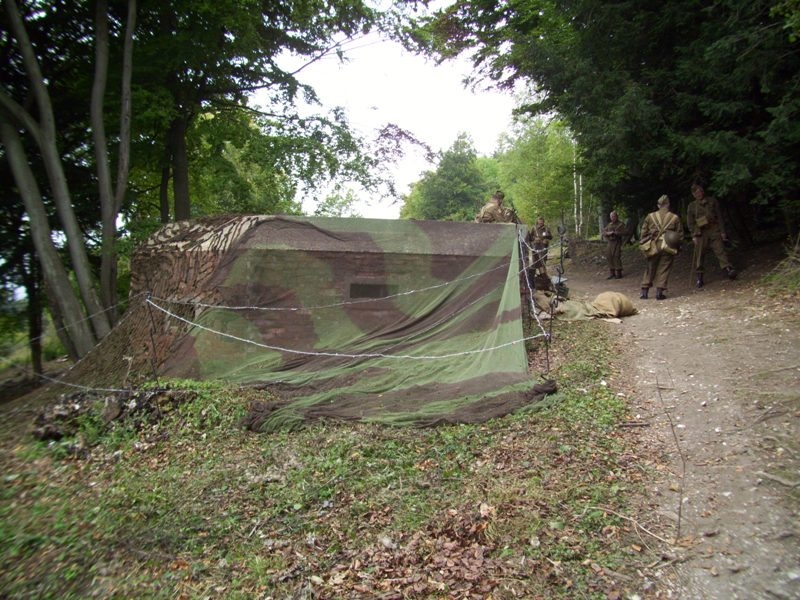 Camouflage netting conceals the side of the pillbox 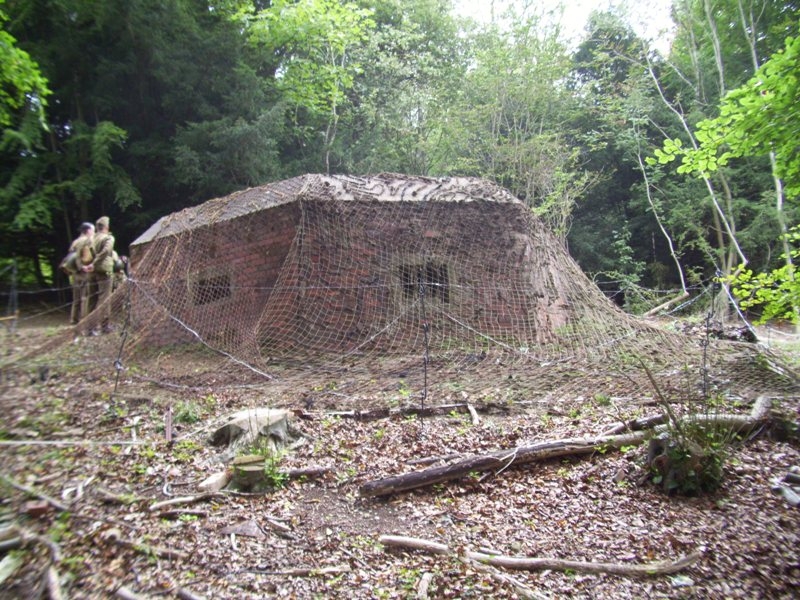 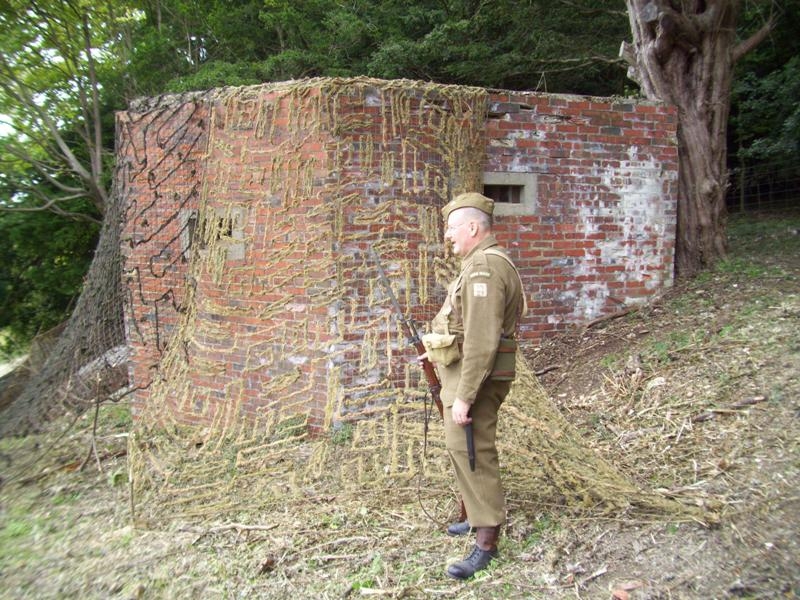 As luck had it both the interiors of the defences still clean and had excellent whitewash finish, this helped tremendously for photographic purposes.

PSG member Mike Hopton had invited me along to record the day’s activities as well as being able to experience the rare chance of being able to handle and help set up a Bren gun in the shellproof pillbox. After a short while clearing debris from the boxes front leg mounting cut out the gun was in place and mounted on its tripod to fire on set lines. 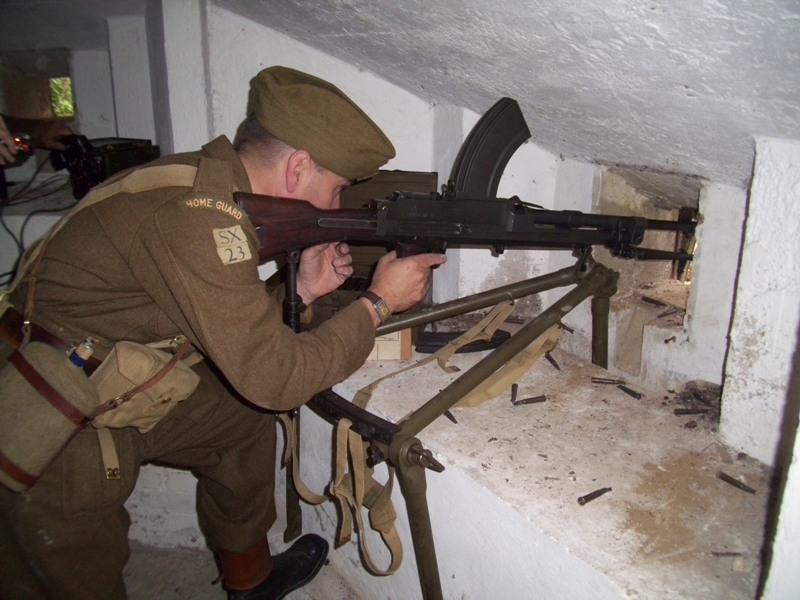 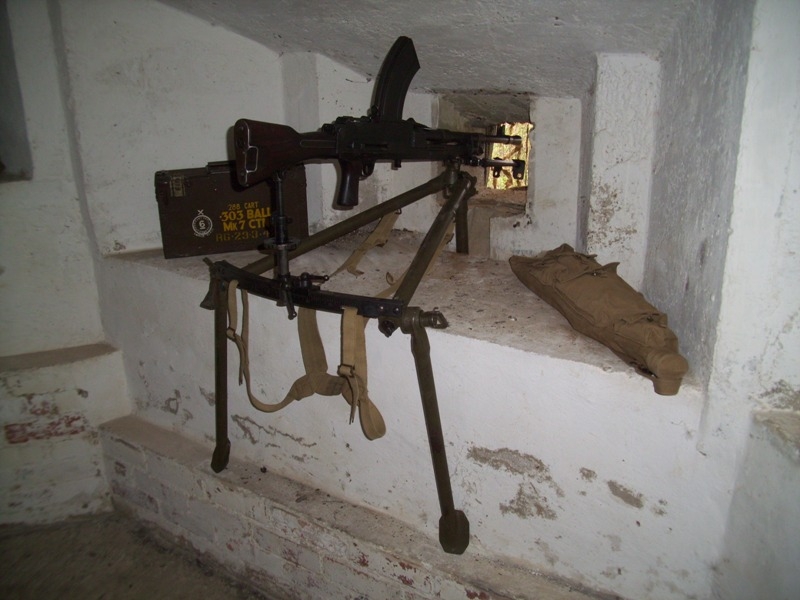 Bren LMG on its purpose tripod 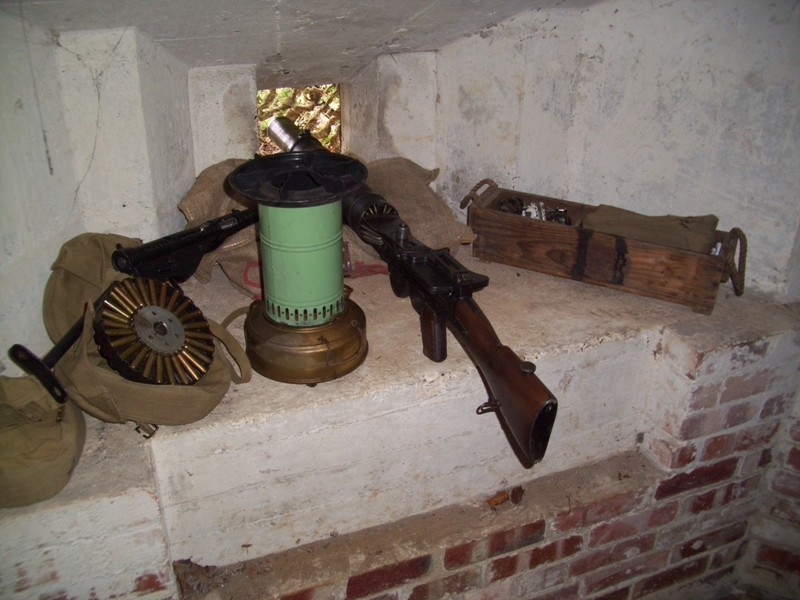 To give an extra touch of realism related equipment was set up inside this box such as ammo boxes, Sten gun, sticky bomb and a box of grenades and of course spent cartridges.

Adjacent to this defence an additional Bren was set up on its anti-aircraft mounting, camouflaged and manned by two Home Guard in period uniform.

A short walk along the track was the second type 24; this was suitably draped with two types of cam netting, one with an undulating green and black pattern. Surrounding the forward part of the dug in defence was Dannert wire of the “plastic variety” mounted appropriately on screw pickets. 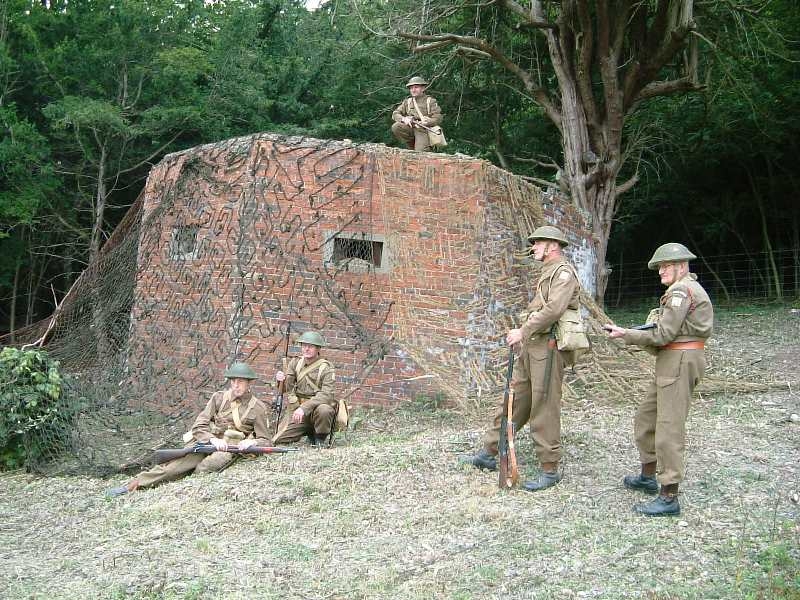 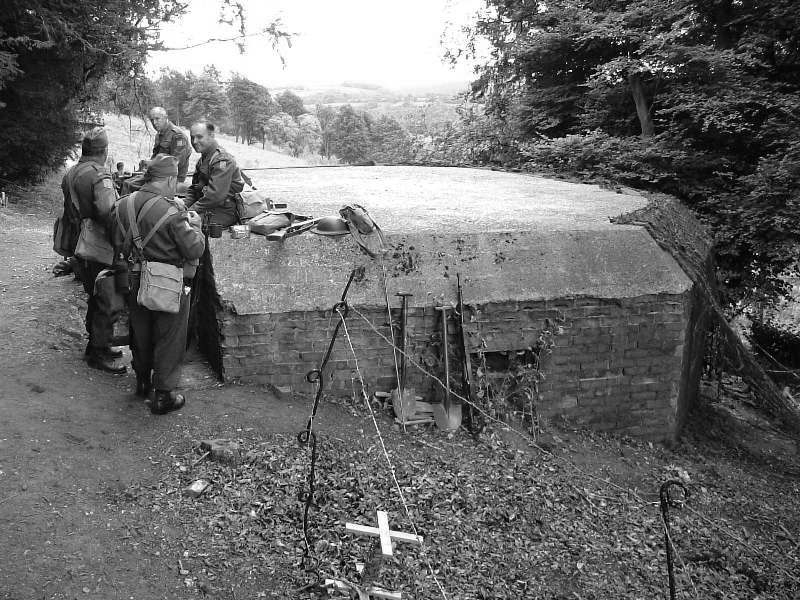 This photo could quite easily be 1940

Inside this defence it had been kitted out and illuminated with paraffin lamps. A Lewis Gun and Boys Anti Tank rifle sat on sandbags positioned on the loophole shelves, whilst outside a Vickers Machine gun sat in a tree line suitably hidden by netting…

NT warden Rob had arranged to meet the public at 11am at Ranmore NT car park for a two mile walk to where the display was to take place, The scenic walk from the car park along the North Downs way took approx 45 minutes and  passed at least seven  pillboxes on the way before finally reaching the display area.

A large number of people turned up, great enthusiasm was shown by the Home Guard guys answering all sorts of questions  from curious adults as well as excited children. 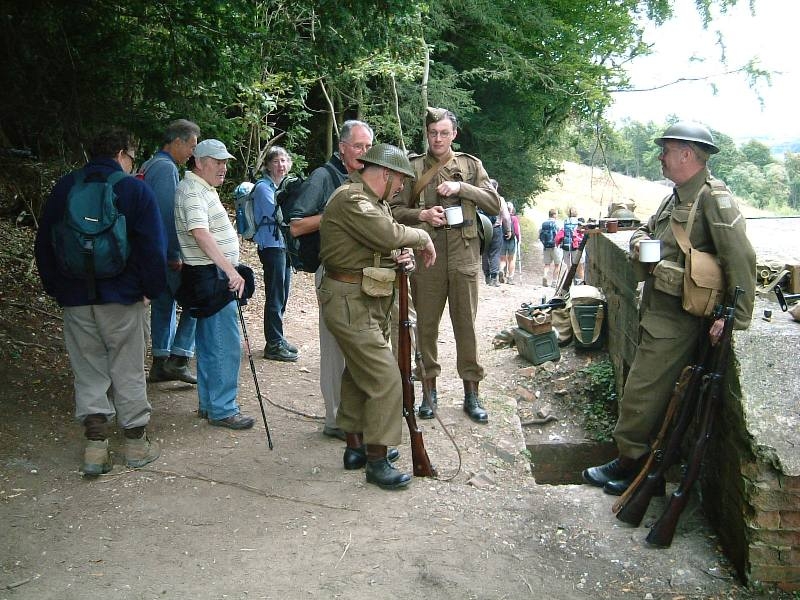 Walkers passing by take an interest in whats happening

During the afternoon small groups of ramblers and cyclists passed in both directions, most stopping to admire and listen to the proceedings taking place.

Both pillboxes soon became very cramped with eager visitors all enjoying the day’s activities and listening to explanations of how and why the defences were there in the first place. Later on in the afternoon demonstrations were given of battle scenarios; including a mock attack and firing of both the 303 rifles and Sten gun, a special demonstration was given by Richard of both the Boys Anti-Tank rifle and the North Over projector Home Guard weapon.

Sometime around five o’clock most visitors had melted away and final group photos were taken, several posed shots done around the pillboxes before a barbeque for the group was given thanks to Rob Hewer and his National Trust staff.

Photos and article by Tim Denton