Recovery Of A ‘Bison’ Mobile Pillbox 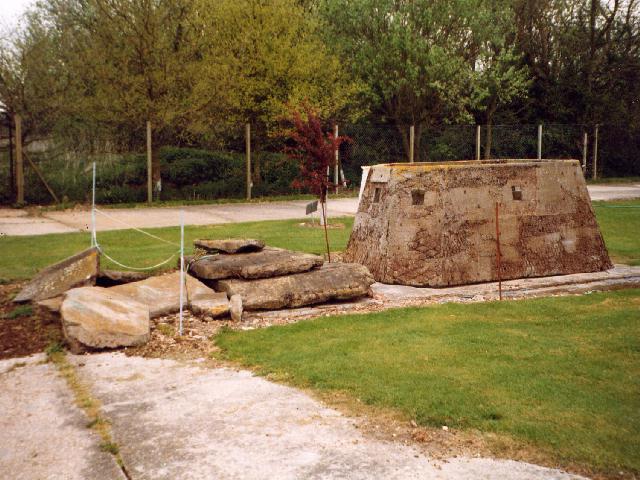 By The Lincolnshire Aircraft Recovery Group

The remains of the Bison were found at Sleaford where it had been a familiar land mark to many and a playground item to many children over the last 50 years. However, few could have known its historical value. Indeed, only around 200 were built and no two were never the same.

It was not until 1988 that the Lincolnshire Aircraft Recovery Group were informed of it’s existence by a local Sleaford resident, Mr J. Shortland. On seeing the structure it was obvious that this was no ordinary pillbox. A further two years of research provided an answer as to exactly what it was.

Contact with the Beverley Museum of Army Transport gave the vital information. They have the only other Bison pillbox known to have survived so far. That Bison has now been moved to the Tank Museum at Bovington, Dorset.

Further contact with Bison Floors Limited of Tamworth, Staffordshire, proved that they were the original Bison Concrete Limited who manufactured the pillbox during WWII. They kindly provided much needed photographic and technical information.

With the Bison having such historical value it was decided to remove the relic to a safe place of keeping. With the landowners permission granted the operation was planned.

As the Bison was in a copse, it had accumulated a lot of rubbish and so once it had been removed the site would be cleared and restored to nature.

On Sunday March 22nd 1991, a team from the Lincolnshire Aircraft Recovery Group (LARG) based here at the Lincolnshire Aviation Heritage Centre (LAHC), together with heavy lifting equipment kindly supplied by A.P. Crane Hire of Boston, successfully lifted the remains.

The final journey was then made by using E.T. Morris’s, New York based articulated lorries.

Amazingly, on lifting the concrete sections, it was discovered that the roof still retains its camouflage paint and one of the can sections has its original wooden shuttering.

Following the recovery to East Kirkby and subsequent publicity by the media, information came forward from various people concerning its history.

The most important contact was from Mr Hide of Nottingham. He informed us that the Bison was used by the Home Guard for airfield defence at RAF Digby, some miles north of Sleaford.

RAF Digby was the most northern Battle of Britain Station and therefore required additional protection. However, later in WWII as the Allied advance moved further into Europe, Digby was downgraded and hence the additional airfield protection was not required.

The Army Transport Corps working from Hanley`s yard, Sleaford were tasked with it’s removal to Ferrybridge, Yorkshire for storage. Unfortunately, the condition of the vehicle was so poor that it could not be moved any great distance. The Home Guard eventually used it for road block defence on the A15 just outside of Sleaford. Towards the end of the war it was again unwanted and it was finally abandoned in a copse to the side of the A15 near Quarington Lane end. The ensuing years saw it stripped and vandalised until eventually the chassis was converted for use as a farm trailer.

It is interesting to note that the original lorry chassis was a 1915 Leyland Box Van, complete with solid tyres and chain driven. A remarkable coincidence was that before being commandeered by the Army and sent for conversion to a mobile pillbox, the lorry was owned by Cammocks of Sleaford and used as a furniture van. So, the lorry has always been based in Lincolnshire!

The group has hoped to fined a suitable period chassis for the pillbox and to reconstruct the Bison to as near as original as possible.