On 29th May 2010, Colin Anderson and Ian Hall carried out a survey of the Auxiliary Unit (Special Duties) Zero Station at Heifer Law, near Alnwick.

This report provides an overview of what was found during the survey.

Thanks must go to Northumberland Estates, the landowners of the site, for providing access to the hide. Thanks must also go to sanofi-aventis for the loan of the gas monitoring system which was used to ensure that the atmosphere within the hide was safe.

The Auxiliary Units were set up in 1940 as a result of the threat of invasion by Nazi Germany. There were two discrete branches of this organisation.

The first branch of the Auxiliary Units was established to carry out sabotage behind the advancing enemy lines.

The second branch of the Auxiliary Units was the Special Duties section. In the event of an invasion, this branch would have been responsible for gaining and communicating intelligence about the deployment of the enemy forces.

The Auxiliary Unit Special Duties section recruited people whose work allowed them relatively free movement, such as doctors, district nurses and vicars. They would prepare simple intelligence reports, based on what they had seen, which would be left in concealed “letter boxes”; under rocks, in holes in trees etc. These reports were then collected by the next level of operatives, who would have access to a secret radio transmitter, known as an out-station. The transmitted reports would be collated by a local control station who would then relay them to the main military headquarters. This control station or “zero station” would be constructed in an underground hide. Each zero station would have a radius of operation of about 30 miles.

The hide was found to contain a large quantity of leaves and rocks, which have accumulated from the surrounding woodland. Before any survey work was done these were all collected and taken out of the hide.

As well as the leaves, the hide also contained the wooden remnants of the hide’s original fittings. All these remains were retained within the hide. Discrete items were laid out on the floor of the central main room, while the rotted remains were kept in a single pile in the entrance chamber.

The escape tunnel and its shaft were not cleared due to concerns about the stability of the earth at the top of the shaft.

Once the hide was clear the key measurements and photographs were taken. The primary results of the survey are reported below. 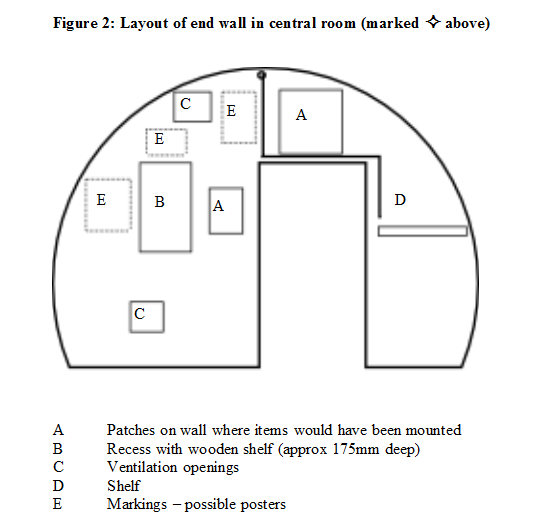 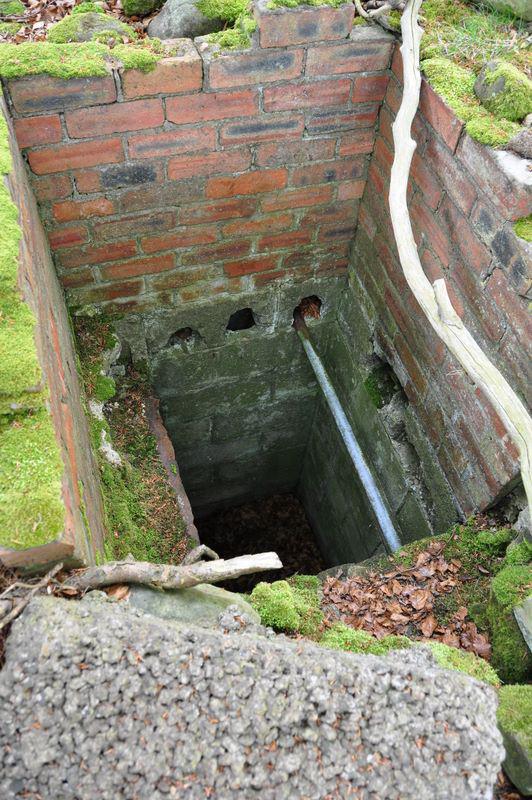 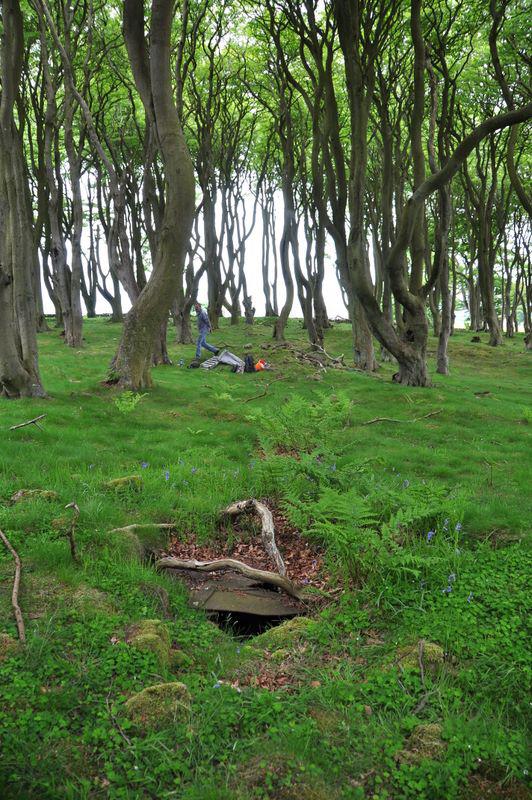 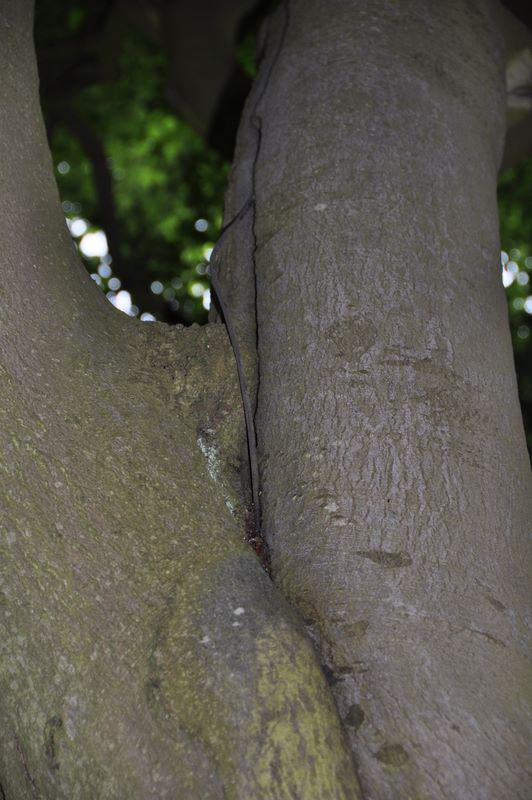 Aerial Wire in Nearby Tree

The hide is located within a circular earthwork in Heifer Law wood, to the north of Alnwick [map reference NU180177]. It consists of an underground building with three rooms [figure 1]. At one end there is a vertical access shaft [figure 3]. At the opposite end there is a 14 metre escape tunnel which exits into another vertical shaft [figure 4].

At the surface the outline of the underground elements are evident through the settling of the in-fill earth. The highest point of the hide is approximately 150mm below ground level so the covering is quite thin.

A nearby tree has an aerial cable concealed within the bark [figure 5].

The floor of the hide was made up of concrete paving slabs. It is unclear what these slabs were laid on top of.

The entrance shafts and the room dividing walls were constructed from concrete blocks, most of which had been plastered and painted white. All the walls showed signs of where items such as shelving had been secured. The doorways all had spaces where wooden lintels would have been but these are either missing or in a very rotten condition.

The entrance shaft is linked directly to the entrance room. Within this room there are two metal tubes, which are connected to a larger underground glazed pipe system [figure 9]. These may a means of getting messages into the underground hide. There is also an unidentified 50mm diameter metal tube.

A small opening leads into the main room. This would originally have had a door, remains of which were found during the survey. This room has a high and low ventilation holes which are connected via two large concrete type tubes in the escape room to an unknown point outside the hide. There are also signs of a lot of equipment being mounted on the wall next to the escape room [figures 2 and 6].

A small opening leads to the escape room. This room has the escape tunnel leading from it, which is formed from 750mm diameter concrete drainage pipes. There are a number of small pipes leading from this room to an unknown location (possibly outside the hide). These may be related to the generator that was probably installed in the hide to recharge the radio batteries.

The roof of the whole structure was made from corrugated iron sheeting, in a circular cross-section, similar to the traditional air raid shelter. The iron sheeting showed signs of having been painted a white colour, but most of this paint has fallen away. The exposed iron sheeting is corroded.

Some parts of the wooden remnants could be identified, though all are in a poor state [figures 7 and 8]. Most of the wood seemed to have been painted blue at some time. Three doors remain as well as a small door which would have blocked off one of the ventilation ducts. These all seem to have had bolts on both sides. The doors were covered with a type of oiled felt. The remnants of what might have been one of the shaft hatch covers were also found.