Adapted from an article published in Loopholes No: 21

Ever since I moved into the area I have been fascinated by the mill complex which straddles the River Avon some 3 miles south of the village of Downton where I live.

What interested me were the pillboxes clearly designed to cover the river crossing. 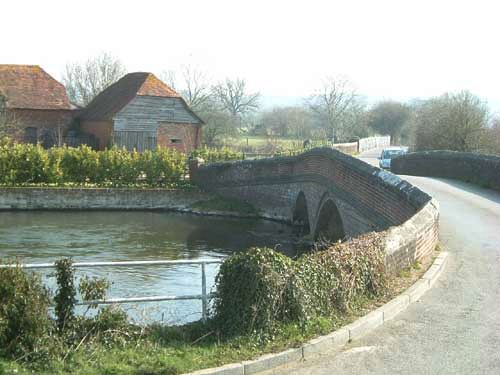 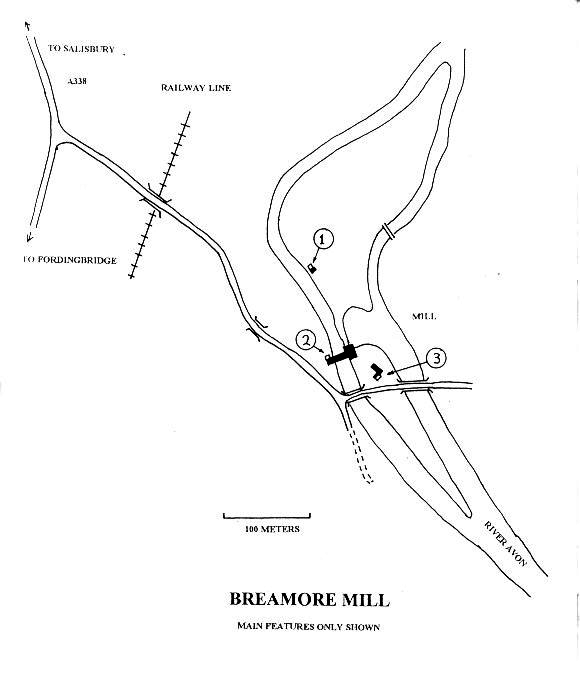 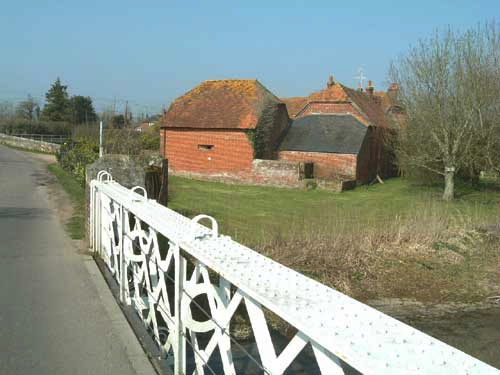 Immediately after Dunkirk the River Avon between Ringwood and Salisbury became part of a stop line and was referred to as the ‘Ringwood stop line’ (see henry wills’ pillboxes p: 12) the aim being to deny east -west movement to the invader. Both Salisbury, to the north, and Fordingbridge, to the south, were fortified (evidence still remains) and the three crossing points in between were also defended to varying degrees. Downton had at least two pillboxes covering the A338 route north while at least one bridge had anti-tank rails ready to emplace. About a mile to the south the railway bridge (now removed) was guarded and presumably plans existed for defence or destruction. The final crossing point was at Breamore Mill (SU 162 174) the subject of this article.

The Avon Valley would have presented a formidable obstacle to any mechanised force as, in addition to the primary and secondary river channels; the river valley was largely water meadows much dissected by ditches used to flood the pasture land. Some of these ditches are significant obstacles in themselves. Straddling the western of the two major river channels is Breamore Mill which is in effect on an island. Some 200 metres to the west of the mill was a now abandoned single track railway running north-south which, with no embankment or cutting, presented no obstacle. A further 100 metres west of the railway, also running north-south, is the A338 Fordingbridge to Salisbury Road. This road was almost certainly regarded as the main axis of any German advance and thus the main threat would probably come from this direction.

Crossing the valley, east-west, and linking the villages of Breamore and Woodgreen is a minor road. This crosses the railway by a hump-backed bridge and a further two bridges cross the river channels directly south of the mill complex. The mill consists of the mill proper and an abutting mill house both of which are two story. Some 20 metres south of the mill is a group of outbuildings.

To deny this crossing point evidence exists of a total of three pillboxes which together provide almost 360 degrees fields of fire covering the surrounding area and particularly the road and bridges. The main interest to me is the careful siting of the pillboxes to cover the main approach routes and to provide mutual support, as well as the evidence of camouflage. 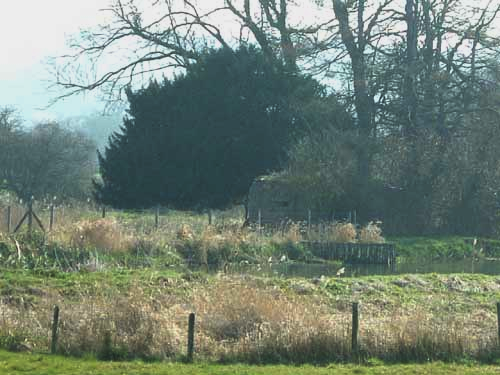 This is a modified type 26 situated on the riverbank and abutting an extremely derelict building which was possibly a pump house associated with the regulation of the water meadows. It is not known what the state of this building was in 1940.

The pillbox has three embrasures, one each on the south west, north west and north east faces. Very effective fire could be brought on any formations crossing the hump-back bridge over the railway and moving down the’road to the mill. In addition the water meadows to the north and east are well covered including a footbridge over the main channel (see map). As the derelict building abuts the southern wall there is no embrasure on this face. Access is via a low entrance way, protected by a blast wall, on the north eastern face.

The pillbox is built on a concrete raft and is constructed of concrete, faced with brick on the outside, with a concrete roof. Walls are 50cm thick and the embrasures are of cast concrete with stepped splayed sides. Of particular interest is the clear evidence of ‘pointing’ etched into the concrete of the loopholes which conforms to the surrounding brickwork and this, along with traces of red paint on the concrete, indicates a clear attempt to camouflage the pillbox. While there is no further evidence, logic would indicate that the plan was to link it with the adjacent building and as both are about the same size it would not have been difficult to create the impression of one structure. It is suggested the very selection of a square type 26 was made partially to conform to the square shape of the existing adjacent structure. 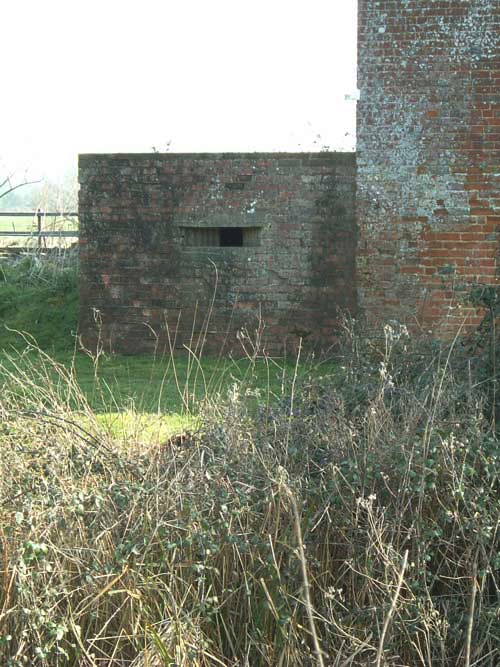 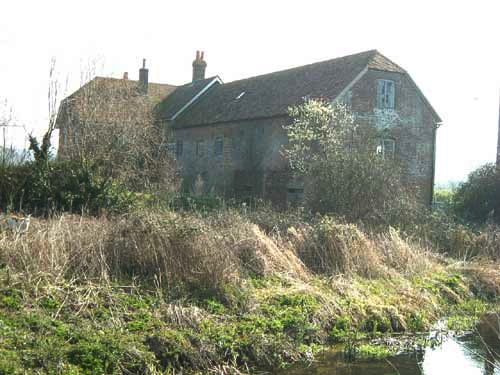 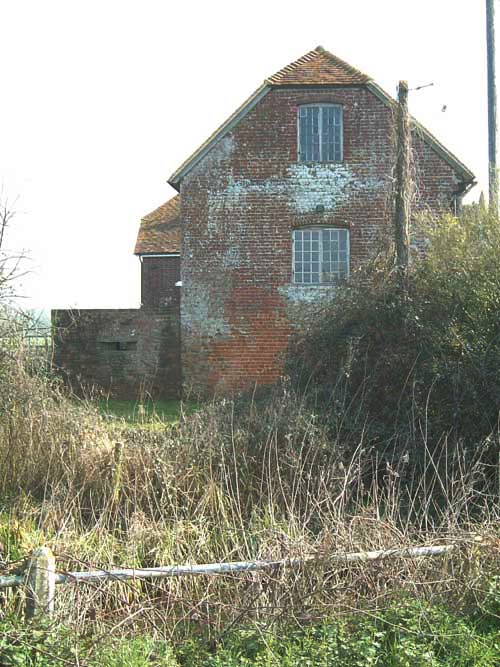 This is again a type 26 of identical construction and layout as pillbox 1 and it is situated abutting the north west corner of the mill. Its north western and, particularly, south western embrasures, enable direct fire to be brought onto the road at ranges down to 20 metres and also interlocks with fire from pillbox 1. The north western embrasure would enable enfilade fire to be brought to cover the river and the rear of pillbox 1 while the north eastern embrasure covers the rear of the mill and interlocks, again, with pillbox 1 in this direction. Access was via a low entrance, protected by a blast wall, on the north east side.

Again there is evidence of ‘pointing’ on the concrete embrasures indicating an attempt to camouflage the structure logically, in this case, as part of the mill. 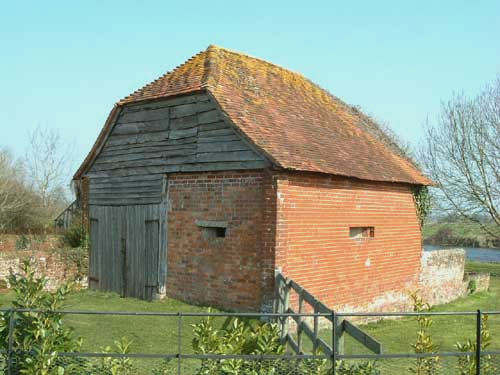 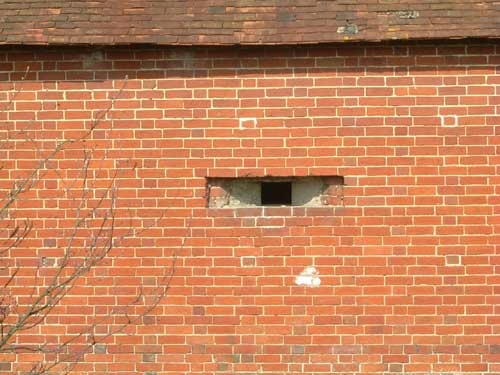 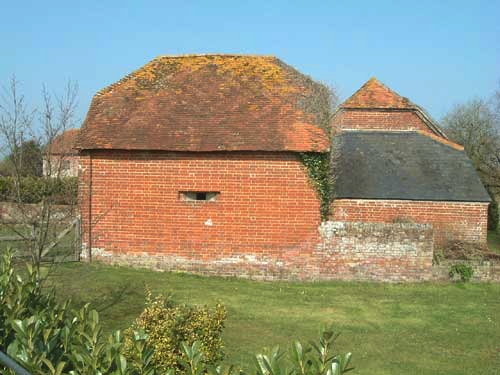 This, to my mind, is by far the most interesting of the three. It is built uniquely for the site and has been constructed in half (nearest to the road) of the southernmost outbuilding. It has three embrasures enabling direct fire to be brought onto the two river bridges.

The internal measurement is 5 metres by 2 metres. It has a concrete floor and concrete roof, the roof is estimated to be at least 15cm and possibly 30cm thick. The four walls are faced internally with brick and have a concrete infill giving an overall wall thickness of about 50cm.

The fact that the south western face is built on the concrete floor and is of a different type of brick to the other external walls indicates to me that this wall was removed to ease the construction of the pillbox and then replaced as a final stage leaving a fully exposed cast embrasure. The other two embrasures clearly show the original brick roughly cut three courses high concealing the cast embrasure which was placed from the inside.

The camouflage is self-evident and with some form of screen covering the embrasures they would have been extremely difficult to locate. These three pillboxes would almost certainly have been covering obstacles on the road although no evidence remains today. In addition troops deployed in the mill would have been able to cover the few areas of dead ground and react according to the tactical situation.

All in all the remaining evidence indicates a considerable degree of careful planning going into both the siting and camouflage of the pillboxes. It is considered that any German attempt to cross the Avon at Breamore Mill would have met with stiff opposition.