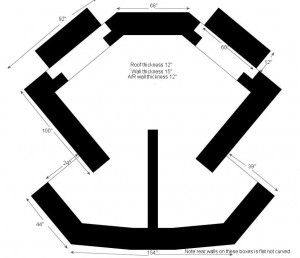 This pillbox gets its name from its unusual entrance arrangement which from some angles suggests it has ears. This type is only found in the North East along the stretch of coast between Scarborough and Withernsea. The design is intended to house two Vickers Machineguns in an arrangement that provides enfilading fire along likely landing beaches. It consists of a single chamber partly separated by a short anti-ricochet wall. There are two embrasures angled at about 80 degrees to each other, below each embrasure is a recess which it is thought would have housed a tank of water for cooling the gun and possibly the front leg of its tripod. Unusually the rear entrance is split by the AR wall which becomes two porches that oddly turn the exits towards the front of the pillbox, directly into the line of enemy fire. The front face has no embrasure.