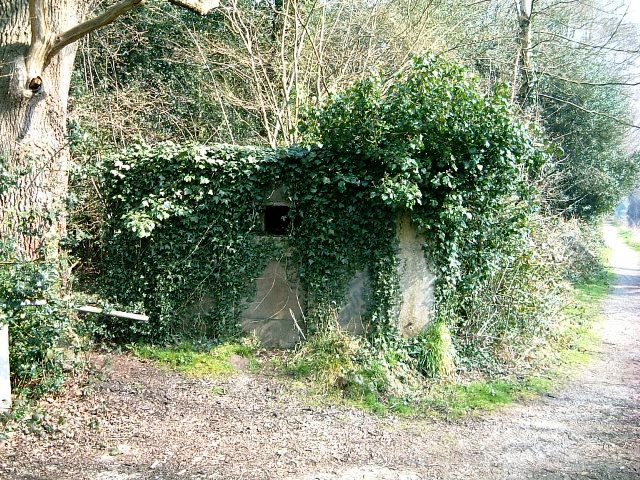 View looking West along canal towpath. Picture taken by the author in 2007 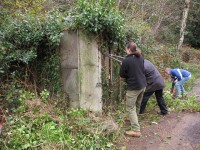 Sara, Ian and Ken making a start on removing the ivy and brambles. 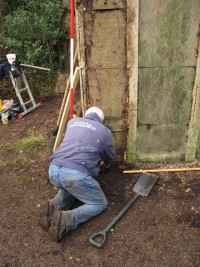 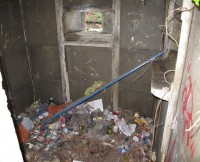 The interior full of a mixture of aged rubbish

The pillbox had been subject to some graffiti over the years but is minimal, however the interior was full of rubbish mainly cans, bottles and dog mess bags. It had been decided previously that a gate would be fitted that will be locked; this was carried out by Canal Ranger Andy Foster a few days before. Fortunately the 1st of December was fine and dry but dull and five of us met at 9.30 at the adjacent lock, with the help of Ken, Ian and David as well as Sarah we spent till 3pm clearing the ivy and bramble growth from the pillbox as well as removing the waste on the roof to reveal a flat shingle coated top. Sarah did a risk assessment on the interior and then spent time shovelling while Roger Cansdale [Basingstoke Canal Society] and myself bagged up the rubbish, eventually the floor was clean and back to its sound original concrete. 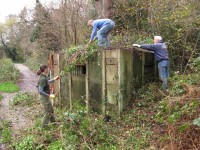 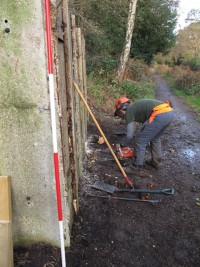 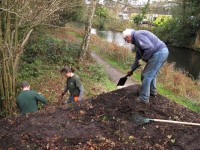 David removing the roof covering of ivy and leaf mould with spade, rake and brush.

The surrounding area including the path and behind the pillbox was cut back and cleared of many drink cans and bottles, after a couple of short breaks for refreshment [kindly supplied by Sara] we persevered with the task in hand. Although the defence has stood here for 75 years it is still in excellent condition, one slab panel is missing above a loophole but this could easily be replaced, much time was spent removing the ivy which had been burrowed itself between the panels using a sharp edge and avoiding damage to the concrete. Possible traces of green paint remain on some of the panels which may be traces of original camouflage concealment. Inside the pillbox the original painted location number of 52B is still visible adjacent to the doorway, above one of the loopholes a piece of wood survives that would have supported a sack or cloth curtain covering the inside of the loophole [this can be found on other prefab pillboxes in the region]. 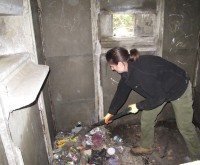 Sara scraping and shovelling the rubbish prior to bagging and removal. 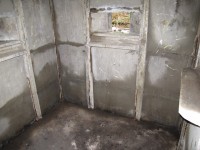 The finished interior after sweeping and scrapping out the edges and corners. 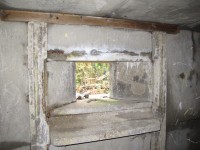 All of the embrasures have the triangular inset on the shelf as well as loophole flameproof flap pivots and one hook to which the flap was attached when up. During the day quite a few people stopped to admire the work, some commented that they hadn’t even realised it was there despite passing it regularly, an elderly gentleman from Nepal talked to us for a while talking about the pillboxes he encountered in Malaya during the emergency when he served as a Ghurkha. Adjacent to the pillbox some small wooden steps have been set in the bank making it easier and safer for anyone wishing to see behind the pillbox, eventually an information and description board will be set here as the Canal Authority are very keen to educate and preserve history associated with the waterway. 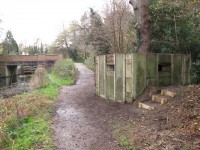 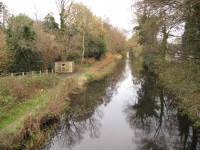 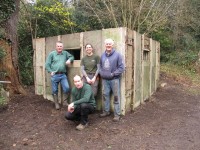 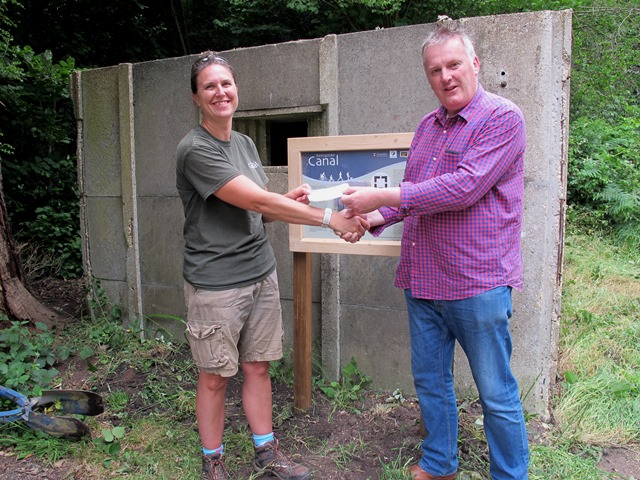