This is the most northerly stop line in the county of Northumberland and as such probably the most northerly in England. It stretches from the town of Wooler in the west to the coast just past Belford in the east, an area of basically moorland and rough pasture.

We assume that the line was built during 1940 and have to add that we have not come across any official documentation concerning its construction. However we have a copy of the dispositions of the local Home Guard unit in 1944 which makes no reference to any of the pillboxes being in use at that time.

The terrain covered by this line is not one that would immediately strike one as being the most vulnerable. However, the line would appear to have two main objectives: firstly the cutting of both the main roads south and secondly the cutting of main East Coast railway line.

In completing these two objectives the line is helped by the local topography. At Wooler the town is positioned at a natural bottleneck at the end of the valley, and at Belford immediately to the north of the town is an outcrop of the Whin Sill, a local geological formation forming an escarpment with commanding views over the coastal plain and with the benefit of a sheer cliff on its western flank.

Between these two main fixed points of the stop line the pillboxes are arranged across the high ground covering all the secondary roads south and the flanks of both Wooler and Belford. The intervening area comprises of a plateau crossed by north-south orientated ridges. To the south of the line the ground changes, gaining height and becoming much rougher.

The line consists basically of lozenge-style polygonal pillboxes interspersed in places with Type 22s and a local design which we have designated as ‘D’ shaped.

This latter type is basically a truncated Type 22 with no internal blast wall or loops in the rear sides (see plan) and is fairly common in Northumberland.

We will start with the pillboxes immediately around the town of Wooler. 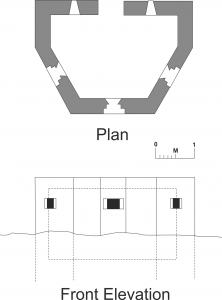 The pillboxes in this area show examples of all three types present in the line. All are to the usual standard designs for this area, the larger lozenges following the design as shown in Mike Osborne’s Typology (Loopholes 4, p.20). It is noticeable that all the larger lozenge pillboxes are on the northern side of the town, whereas on the southern fringe and in the town itself they are all either Type 22s or ‘D’ shaped.

All the roads in and out of the town are covered and there were a total of seven roadblocks present to complement the pillboxes. In addition to covering the roads the pillboxes are also arranged to cover all the open ground and also a large dry valley to the south-west of the town.

As already stated, the pillboxes are all to standard designs, but there is an interesting alteration to No. 3 on the list. This is a ‘D’ in which the three front loopholes have been reduced in size. They have been built with the usual loopholes which were then reduced to a 6-inch square, formed by an air-brick with its centre removed. There are no signs internally of any other changes to explain this. However such alterations can also be seen at two other ‘D’s at Embleton in Northumberland. Any suggestions will be welcomed. 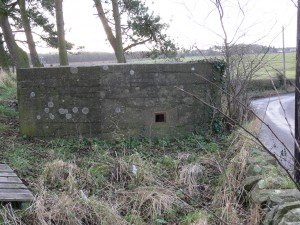 Passing on now to the pillboxes between Wooler and the coast, all but two of these appear to be lozenges, the odd two being Type 22s. This is on the assumption that we have located all the pillboxes. There is a possibility of there being more around Belford and across to the coast.

As around Wooler, they are all to standard designs with three exceptions: No. 20 (Meakaill Knowe) where the two rear loopholes have been reduced to letterbox style and size; and Nos. 17 and 18, both of which are on the high ground above Doddington, and which have brick shuttering up to the level of the loopholes and timber shuttering above, and brick internal blast walls. The use of brick in this way is unusual for Northumberland and we are aware of only one other like this, a ‘D’ adjacent to the A6017 at Akeld just north of Wooler.

There is one last point of interest on this portion of the line. The lozenge pillbox No. 24 (Bowden Doors) has been used as a target at some time. Two faces of the pillbox have been heavily damaged by possible heavy or light machine-gun fire. In fact a number of distorted bullets can still be seen embedded in the concrete. In parts up to 6″ of the concrete has spalled owing to the impact of the gunfire. This is a good indication of the vulnerability of these structures even to sustained fire from only machine guns. 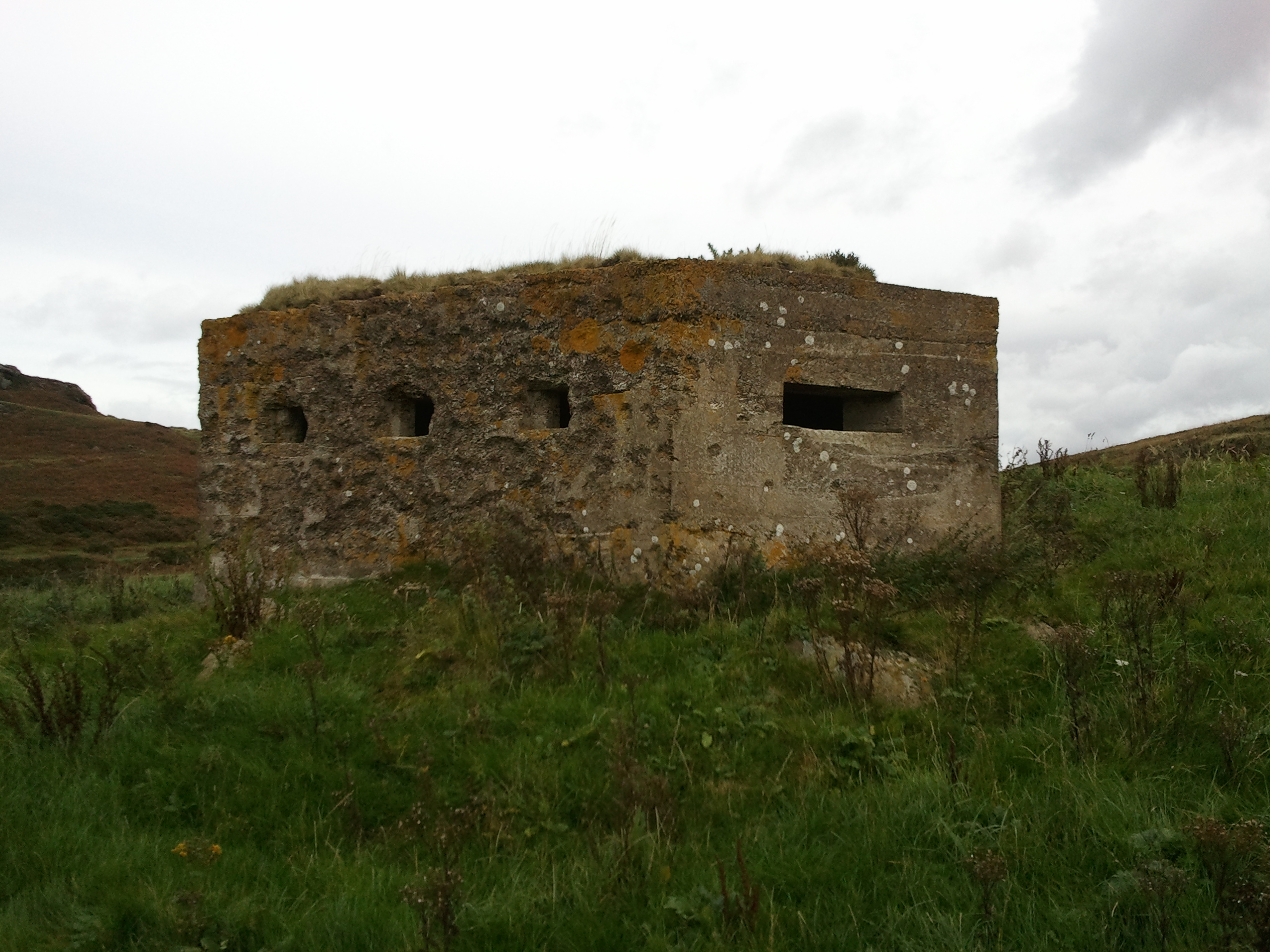 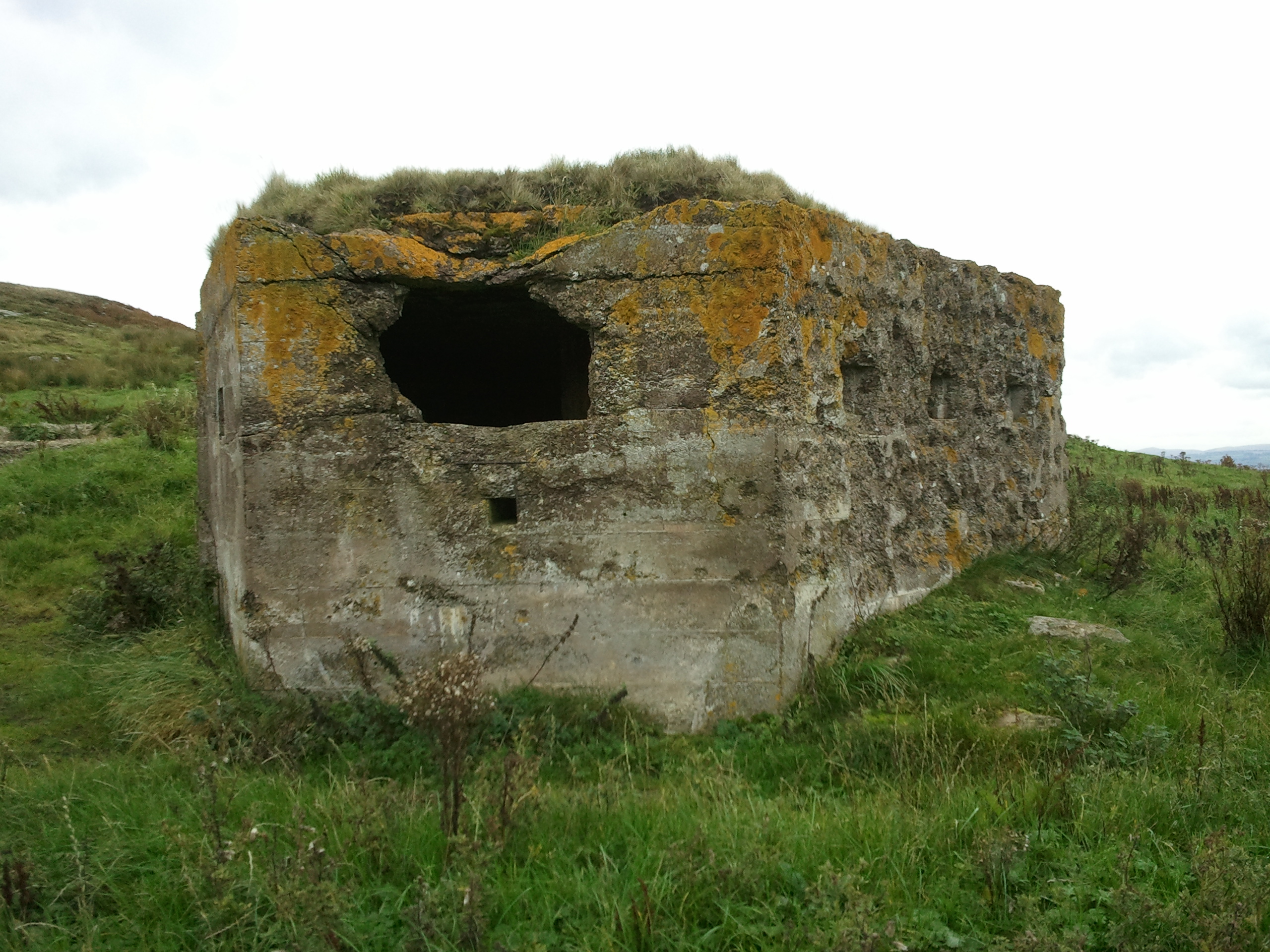 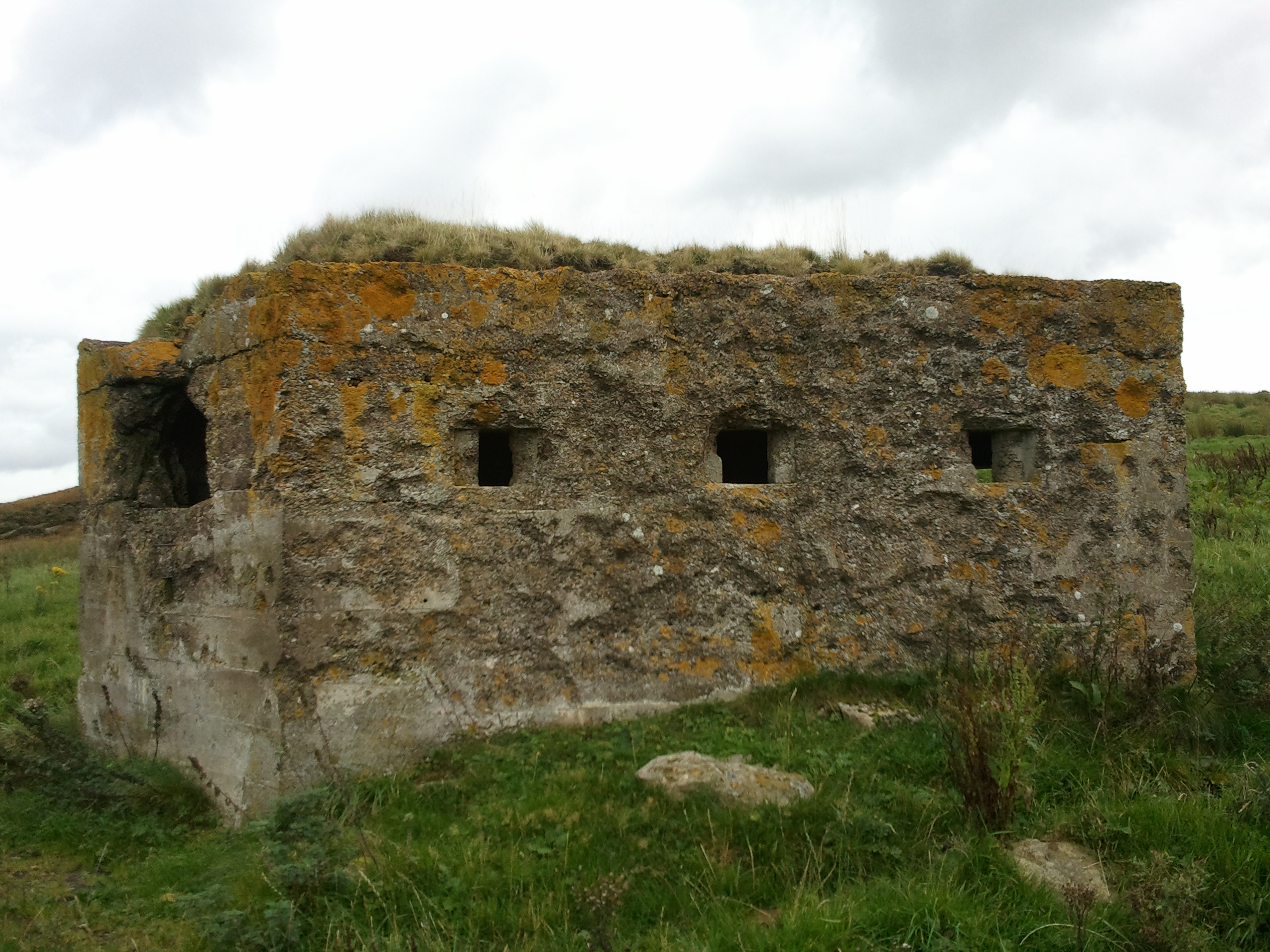 To sum up, this is a good local example of a defensive stop line and probably has the densest concentration of pillboxes of all Northumberland pillbox lines. It is also the only example in this area of a completely defended town with the ring around Wooler. Several of the structures have been demolished but the remainder seem quite secure at the moment. If you should wish to visit any of these sites, most are located close to public rights of way.

This is the second stop line in Northumberland as you travel south from the Border and links the heavily-defended town of Wooler to the next large town south – Alnwick. Like the Wooler to Belford line (Loopholes 8) the majority of pillboxes face north (we certainly did not seem to trust those Scots).

The line stretches across the middle of the county and links the A1 and the A697 again as it skirts around the southern edge of Bewick Moor utilising the high points.

The terrain, as in the Wooler to Belford line, does not appear too vulnerable and the line does not seem to defend any particular vulnerable point. However, it does divide the county into one of a series of boxes and we will see later, when further of the county’s stop lines are discussed, that this seems to have been an overall tactic of defence. The pillboxes are strung out at intervals of approximately 1 to 1 1/2 miles, although they are sometimes closer, depending on the lie of the land. The line links at both ends with the defences of the towns concerned. It is possible that this line did, or was supposed to, extend down the River Aln from Alnwick to the sea but to date we have no evidence of this (anyone able to help?)

The line consists of the traditional Northumberland Lozenge type pillbox, as do all the stop lines in the county. They are positioned generally on the high ground to take advantage of the dominant views. This can be seen particularly well at Old Bewick, an Iron Age fort with two lozenges on its ramparts. There are also a number of sites where the pillboxes do not lie on the high points, generally at positions to cover gaps in the line. At the present time only one of the pillboxes known to be part of this line is known to have been demolished, so the line does appear to be reasonably complete. However, there is a noticeable lack of pillboxes where the line crosses the A1 and it may be that one has been lost at this point; we are presently trying to confirm this.

As with the Wooler – Belford line there are some variations in the pillboxes themselves, this variation being with the layout of embrasures. At the east end of the line there appears to be a lack of the larger LMG embrasures which are generally present at the west end. In addition, as ever, where the large embrasures are present so are the concrete blocks to reduce their size down to rifle use.

Apart from the Lozenges there are also three ‘D’ shaped, or truncated Type 22 pillboxes. These are located around the village of Eglingham just to the south of the line; this village straddles the B6346, the link road between Wooler and Alnwick. As in the defences of Wooler the small pillboxes seem to have been preferred in a built-up environment. These three pillboxes cover three of the roads forming a cross-roads in the village. All are semi-sunken and access is by steps to the rear. It is interesting that so far no pillbox has been found on the road out of the village to the south but it may be that one has been demolished; again, we are trying to confirm this. 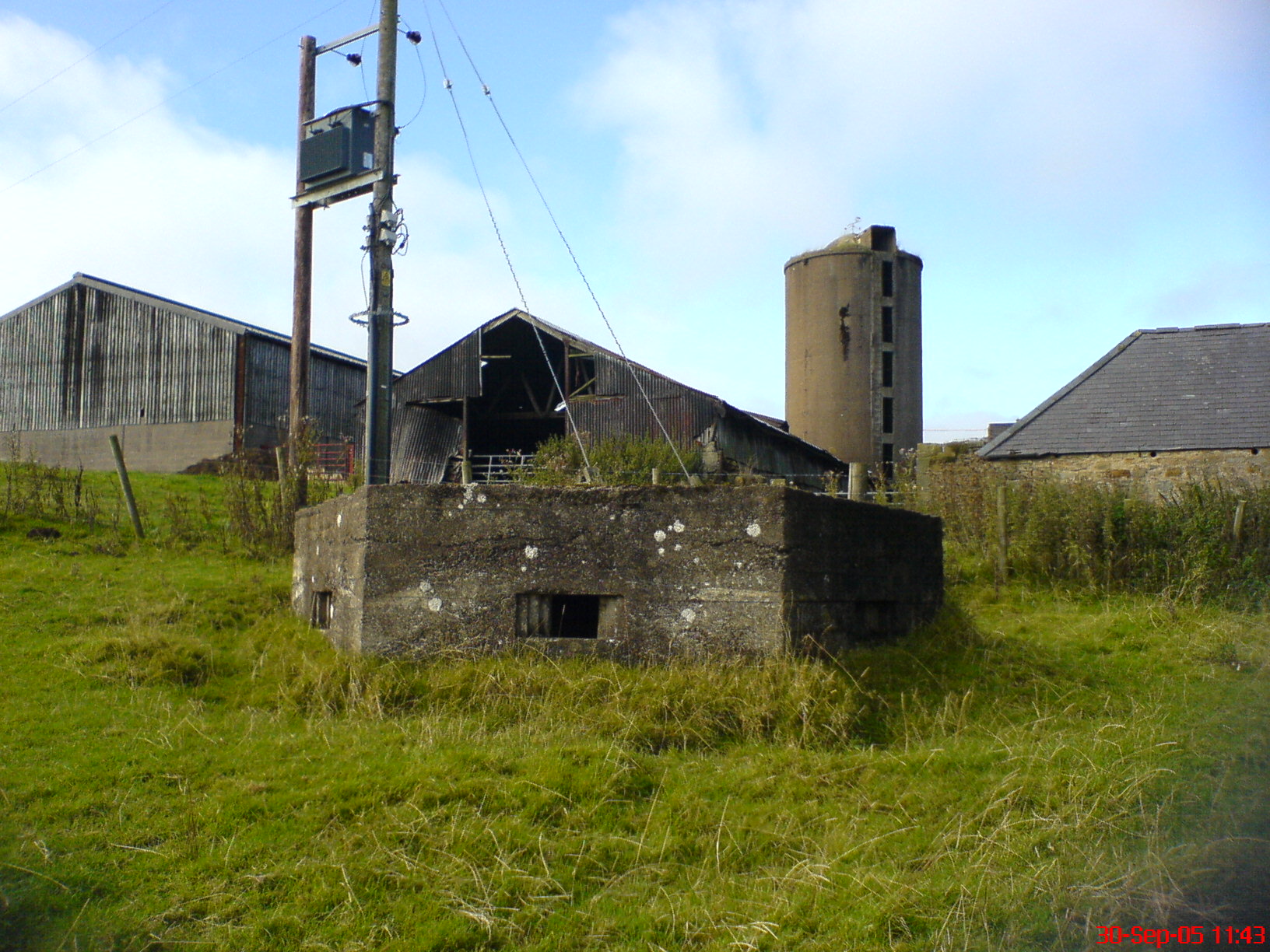 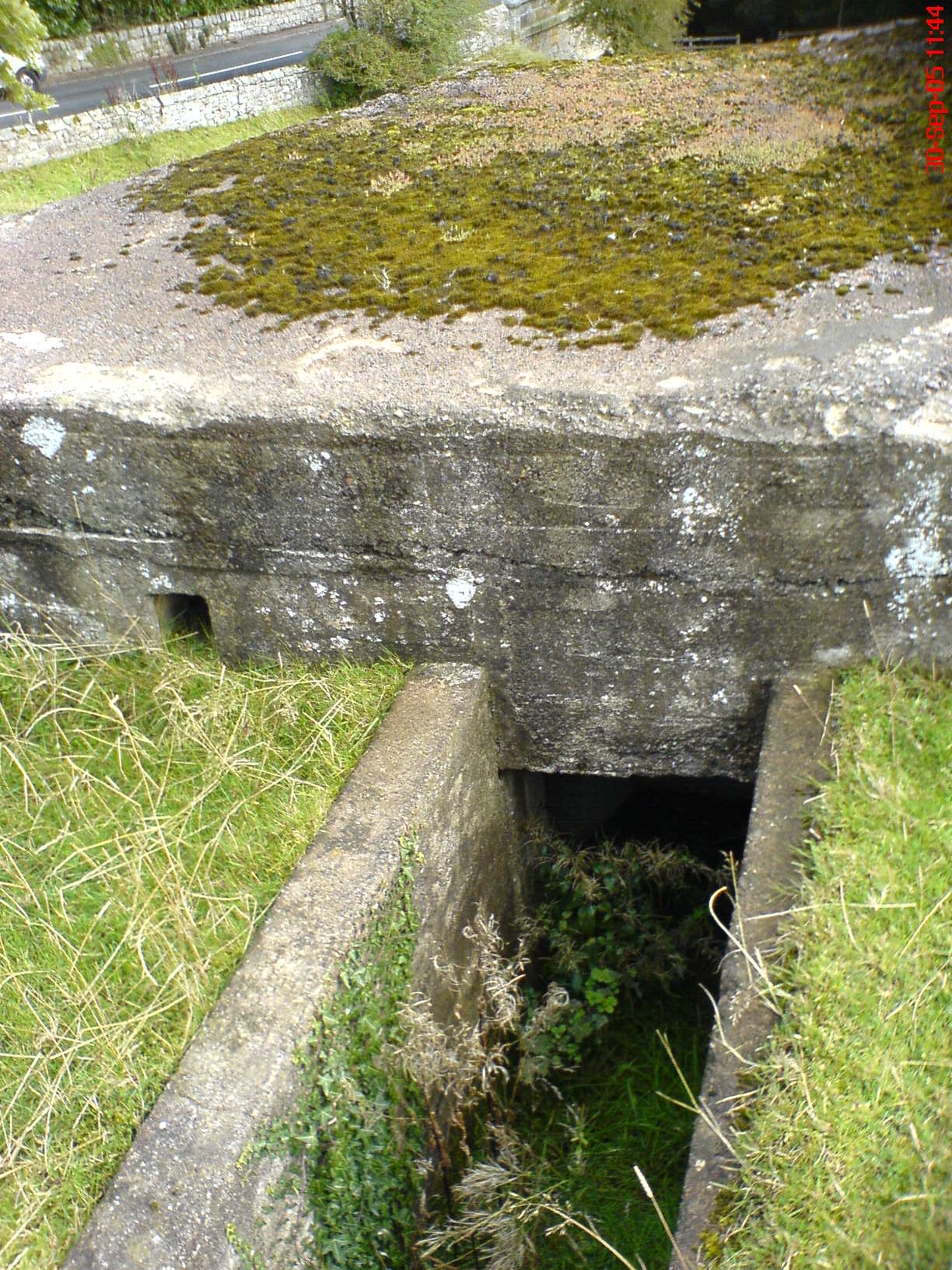 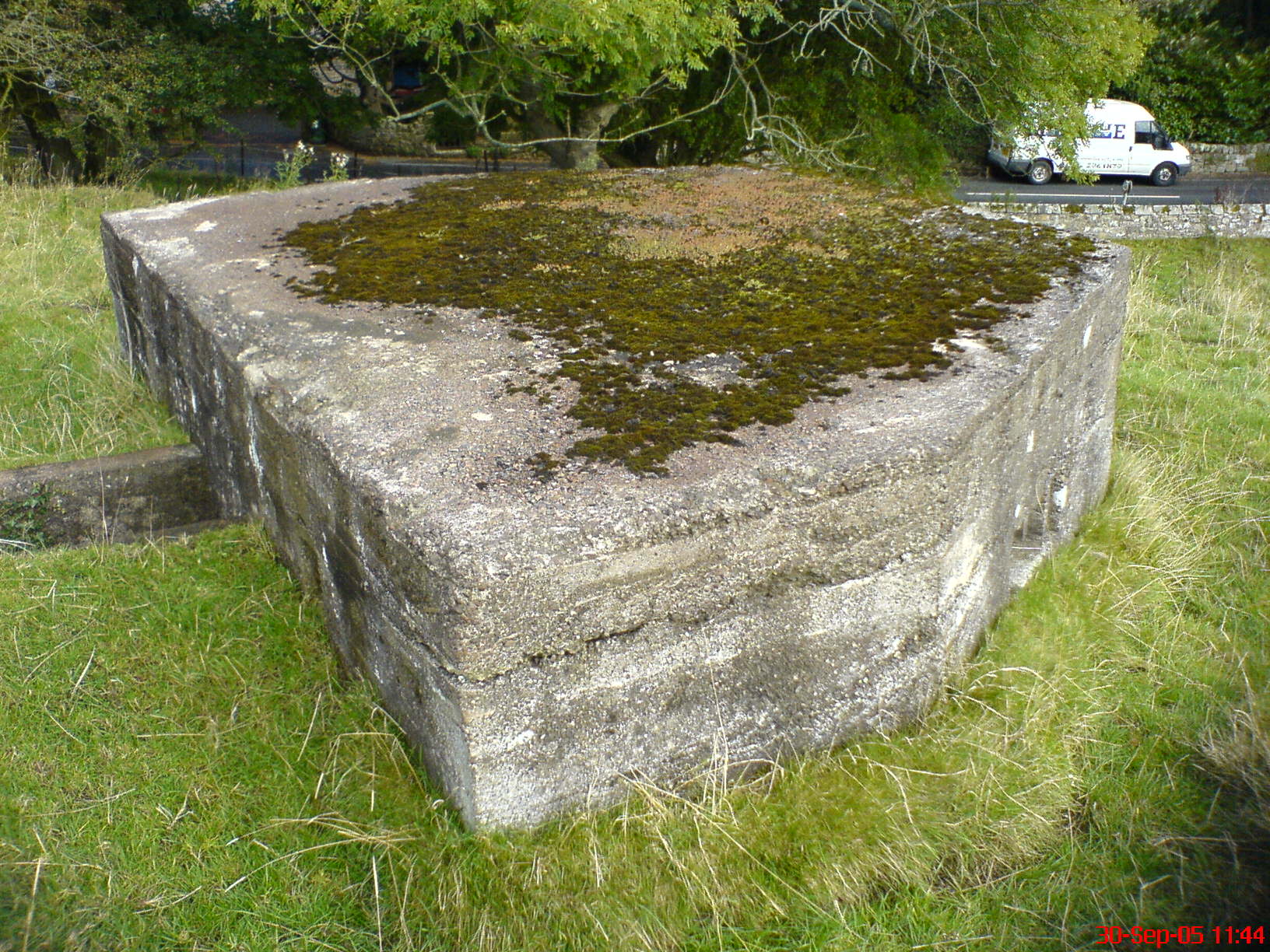 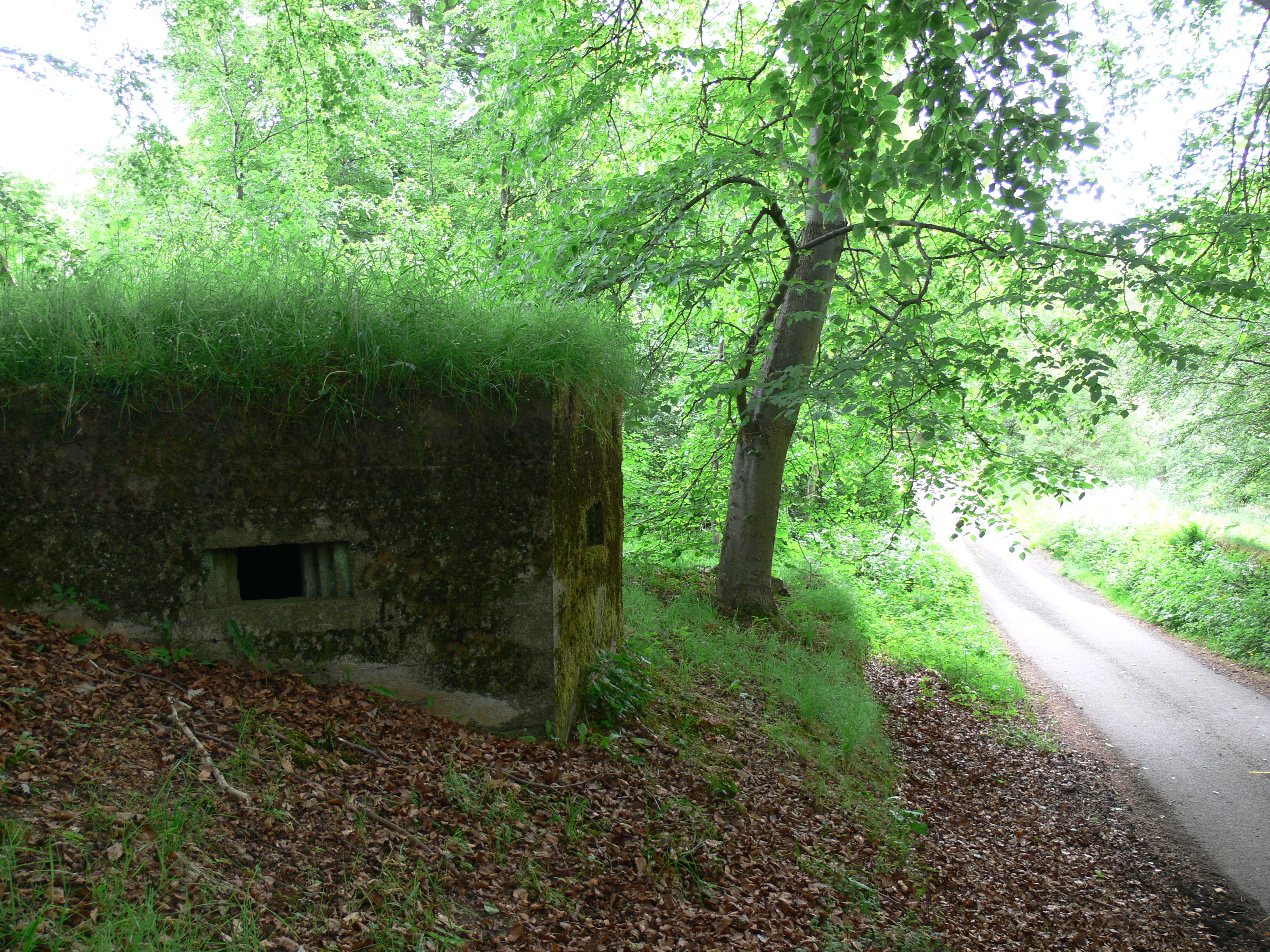 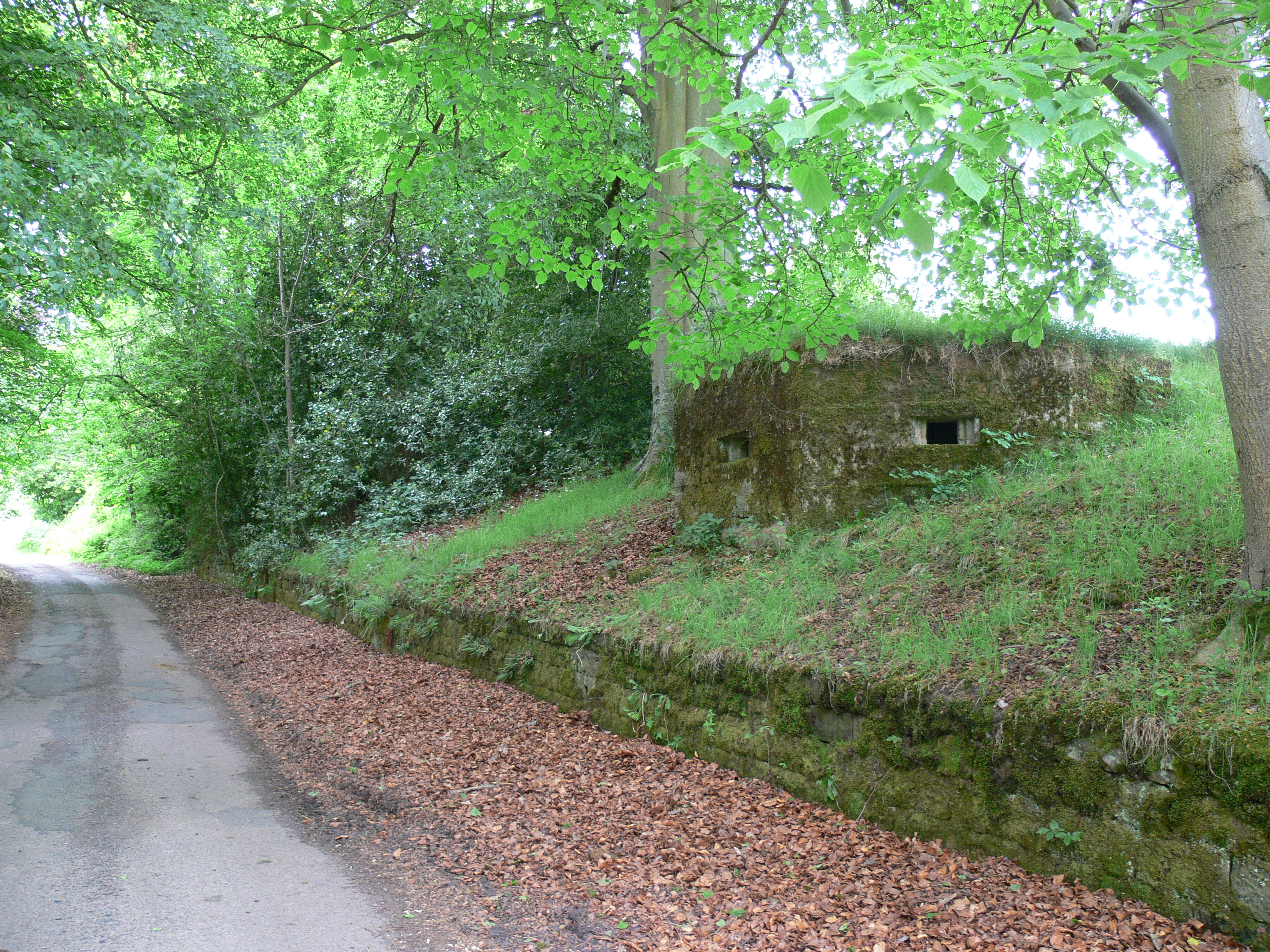 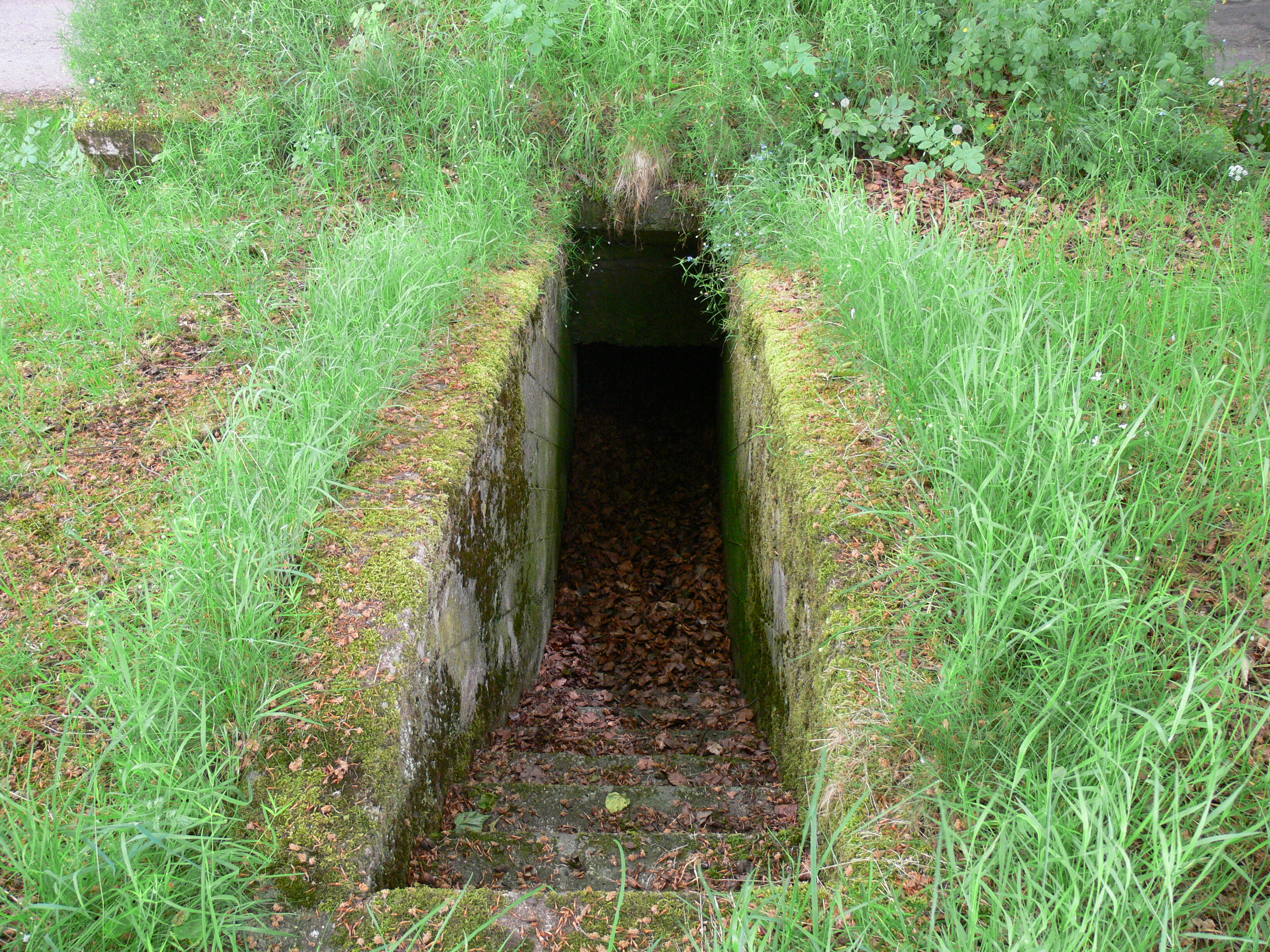 Lastly, the town of Alnwick appears to have had its own defensive ring to the north with all the bridges over the River Aln into the town defended in some manner. There are today three remaining pillboxes to the east end of the town on the south bank of the river. All are constructed from concrete sandbags, suggesting that they were not built as part of the defence line, but they do seem to have been built to inter-connect. As an additional point of interest, on the old A1 out of the town there is a fine loopholed wall to the town cemetery, formed from prefabricated concrete loopholes. This feature commands the main road as it enters the town.

To sum up, the line is very similar to that between Wooler and Belford and appears to fulfill a similar defensive role. It is possible that it stretched to the coast down the River Aln – an obvious tactical use of the river as an obstacle – but as yet no evidence is available to confirm this.