When invasion panic ensued in 1940 road blocks were thrown up everywhere, mainly to the detriment of the public, who walked into them at night or simply drove into them in their cars; individuals were even shot at occasionally – hardly surprising given the tense situation after Dunkirk. 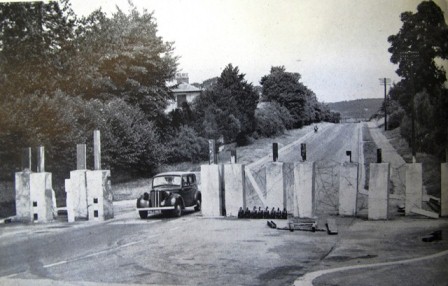 Blocks at this time consisted mainly of anything that came to hand: knife rests, felled trees, wires stretched across the road, horizontal rails, large pipes, old vehicles (readers may recall the famous picture from 1940 taken at Tolworth roundabout on the A3 into London, with old cars making up most of the block) and then more officially concrete cubes, buoys, cylinders and pimples. However, it was soon found that buoys were not as efficient as they might be in stopping tanks and they were eventually sidelined into a support role for anti-tank rails, which began to appear in Autumn 1940. 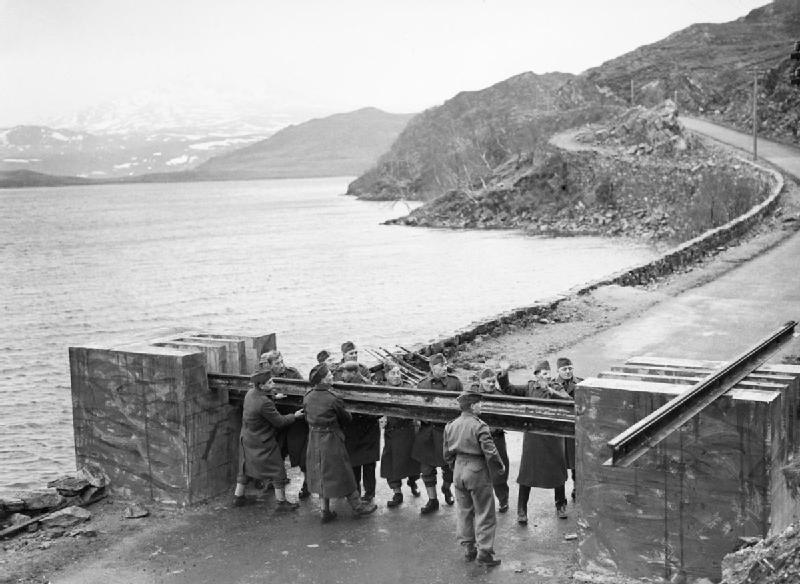 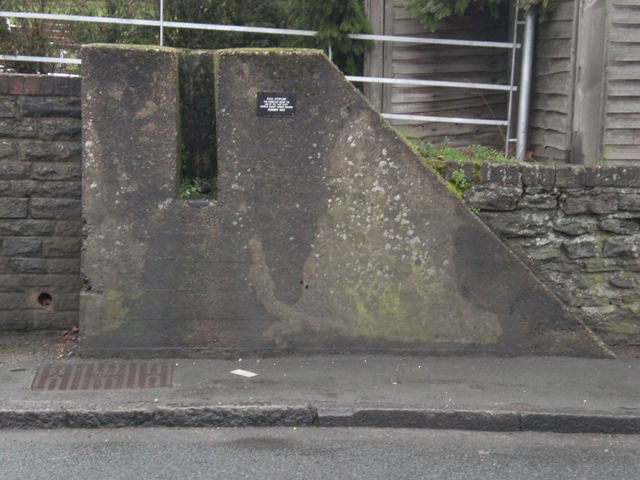 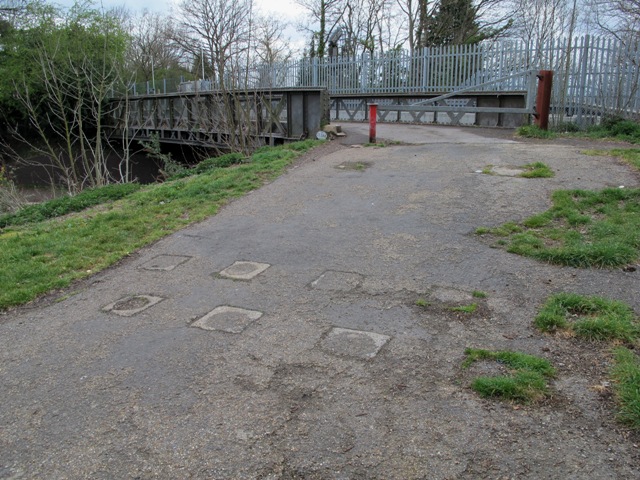 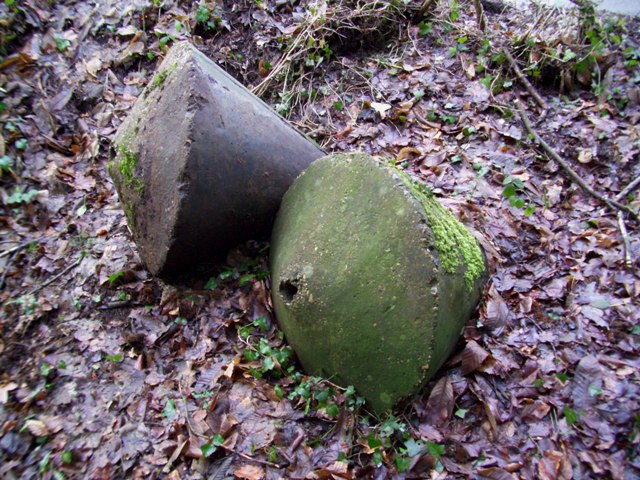 There were two major types of rail for fitting into the road surface: vertical and bent rails, 90lb railway lines and 6″ x 4″, later 8″ x 4″ RSJ`s, the latter coming rather later than the others having been found by August 1940 to be rather more efficient at grounding AFVs, but were often of mixed type within the same road block. 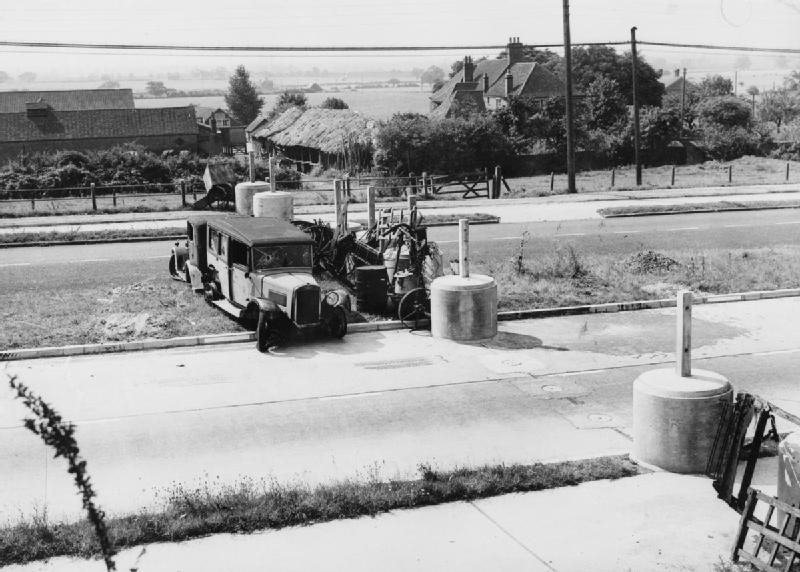 A series of concrete blocks help form a roadblock somewhere in England, 1940. Scrap iron and rusting farm machinery provide the rest of the barricade. Two old cars sit on the central reservation of the road, to be pushed into place to complete the road block should the need arise.
THE HOME FRONT IN BRITAIN DURING THE SECOND WORLD WAR. © IWM (HU 65877)IWM Non Commercial Licence

In addition, welded bent rails/RSJ`s were found to snap under pressure, with those shaped under high temperatures being considered rather more effective. Anti-tank rails were often supplied by the railway companies (who often built their own rail blocks) with RSJ`s being manufactured at local foundries. 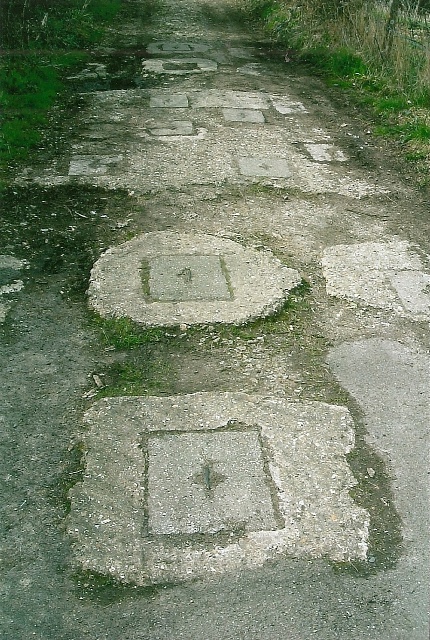 Local initiatives, however, sometimes meant that more convenient resources were brought into use, such as the towpath of the Basingstoke Canal where wooden posts were installed by the Pioneer Corps, in conjunction with pimples and the occasional pillbox. These crude, but probably effective, tank traps were sawn off flush with the ground after the war but can still be seen easily. Of course, road blocks of whatever type were only part of the story with pillboxes, fortified points, flame fougasses, mines, defended field works and so on providing an unpleasant reception for any German AFV unfortunate enough to get hung up on the obstacles. 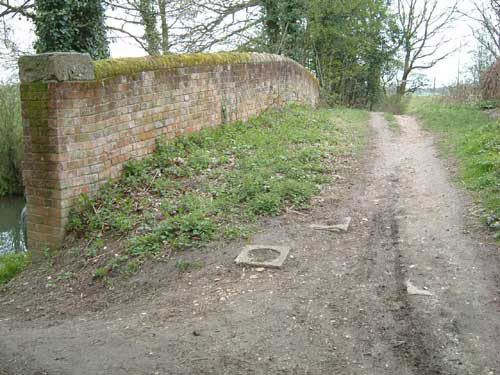 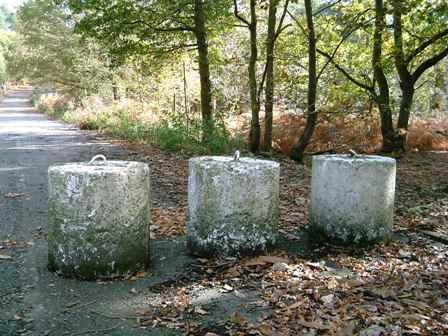 Sockets caused problems in cold weather with freezing, but as mentioned in my article in Loopholes 10, a thin layer of tarmac painted white was frequently applied over the plugs, to be removed when invasion threatened thus solving the problem. Pea gravel was also recommended to assist in the jamming of rails into sockets. Rails on the outsides of formations were often concreted in when movable ones were not required for the passage of traffic and this explains why some have survived in a few places. Otherwise permanent concrete cubes, pimples or movable obstacles were used to block the verges on roads, or sometimes sockets were constructed right up to boundary fences, for example at Banstead, Surrey (now gone). One wonders how many sockets still survive under grass verges, let alone under a thin layer of tarmac.Incidentally, socket plugs, presumably of concrete, from Broads of Paddington came in two sizes by April 1941: 10″ x 8″ and 10″ x 10″, both being 2″ deep with flush handles, they cost 6s 4d (34p) and 8s 2d (41p) each respectively. 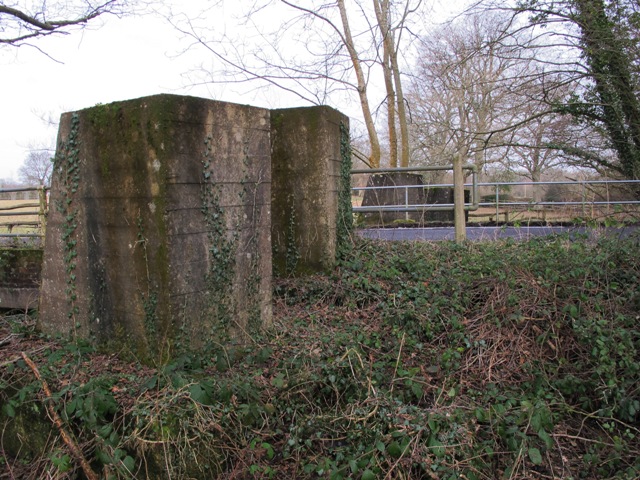 Responsibility for building road blocks lay with the Ministry of War Transport but their powers were delegated to county/borough authorities who either built them themselves of, where labour was short (which was often) arranged for local contractors to do so. Decisions as to the location of blocks lay with the Corps of Royal Engineers whose representatives had site meetings with those involved before construction began, The actual erection of rails and scattering of other obstacles in an emergency was the job of the Home Guard: for example 12 men were expected to close a 13ft gap across a road with 11 rails and 21 cylinders in 30 minutes. Bearing in mind the length and weight of rails and RSJs (rails being up to 14ft 6ins long) and awkward cylinders and the fact that most of the men were not in the first flush of youth, that is no mean feat. 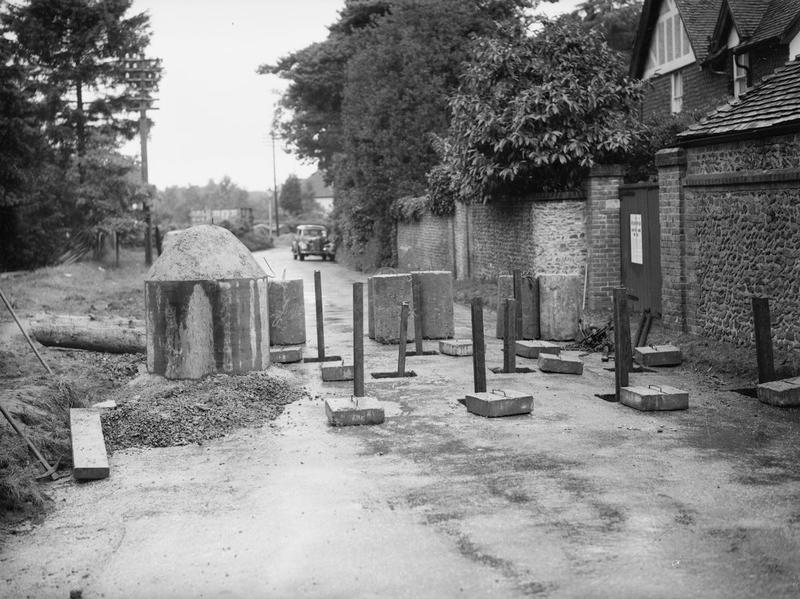 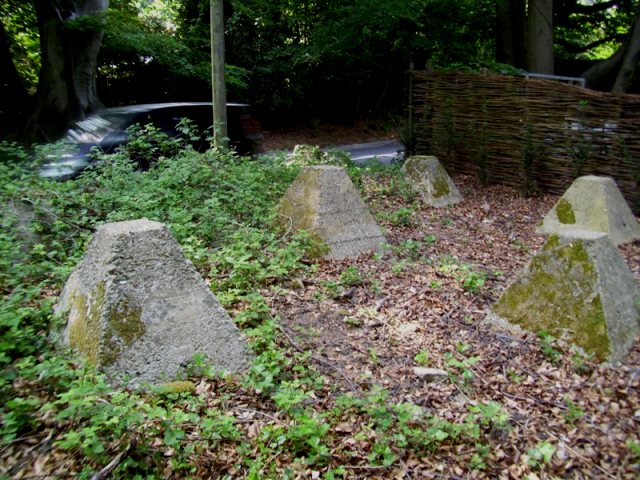 Dragons Teeth forming part of a roadblock near Hindhead Surrey. 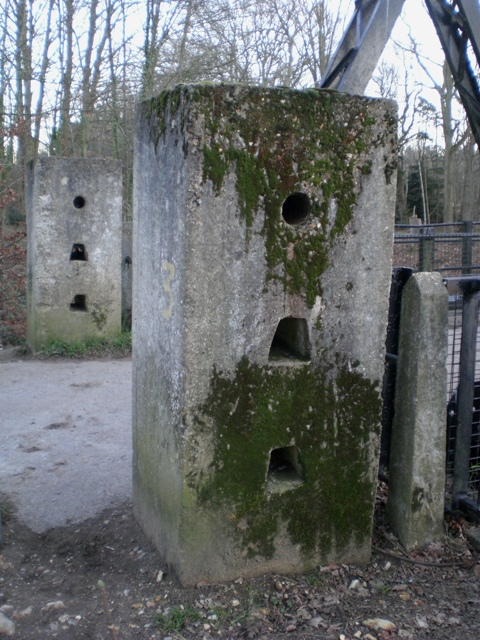 Horizontal Rail Roadblock on the Basingstoke Canal at Aldershot. 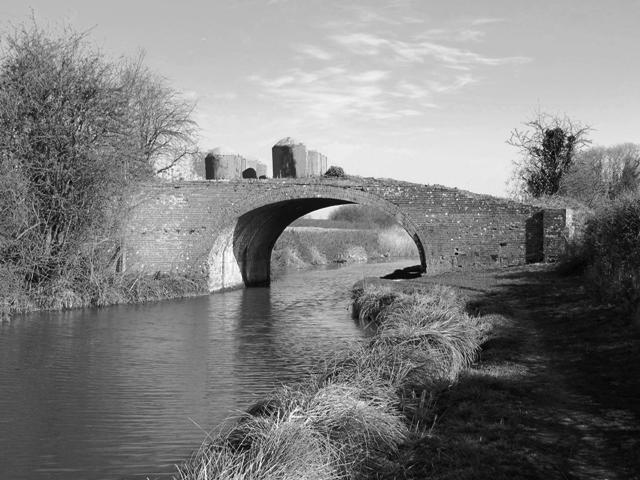 It is hardly surprising that so much confusion arises in trying to trace the history of individual road blocks as they were often moved and constantly modified in the light of new thinking issuing forth from GHQ Home Forces via the various Commands. Indeed in early 1941 many of the older road blocks associated with Stop Lines were being abandoned in favour of new ones constructed as part of ‘anti-tank islands’ and ‘centres of resistance’. In addition, anti-tank barriers with their slotted concrete blocks seemed to have been replaced in many instances by road sockets, which may explain why so few have survived. 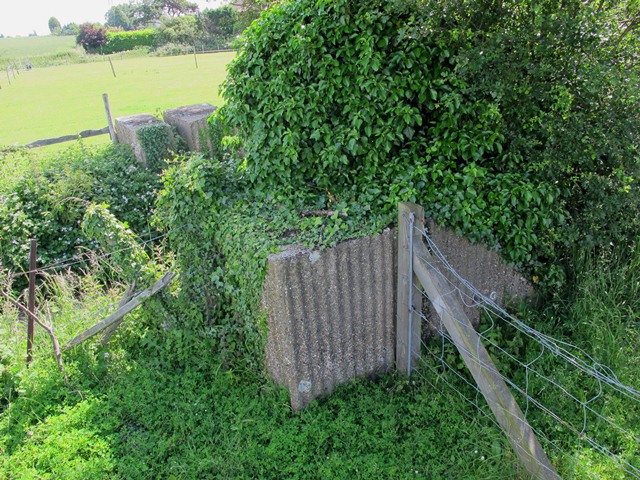 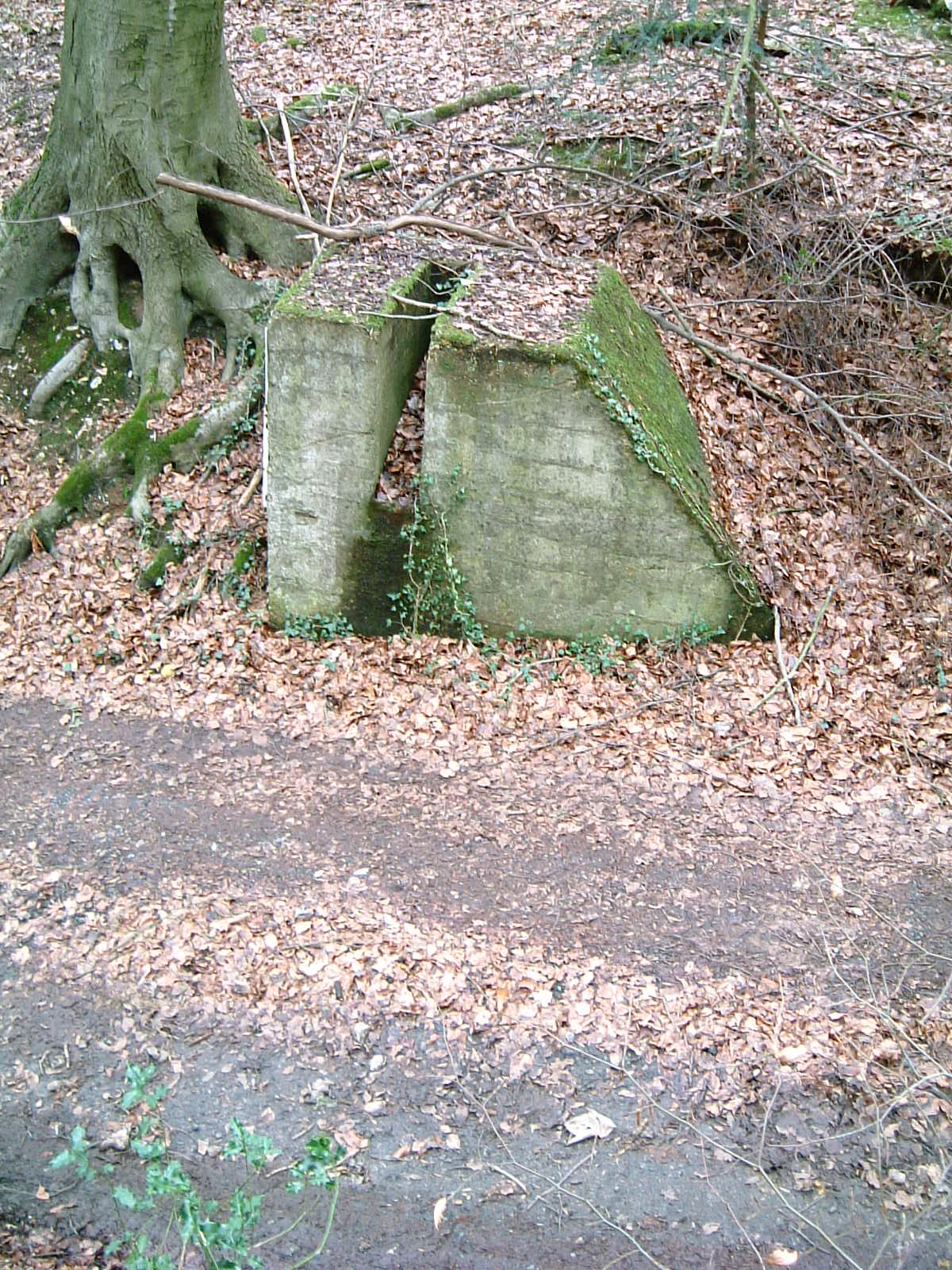 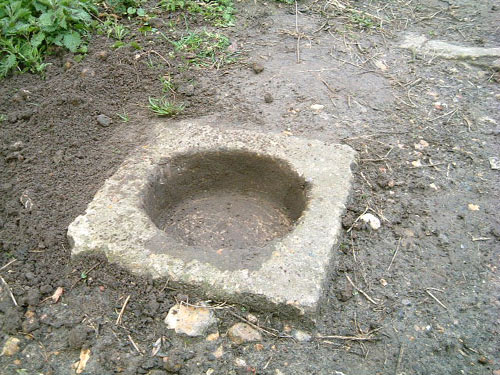 In most cases road blocks ceased to be of any importance once Hitler attacked Russia in June 1941, but certainly within one Home Guard Battalion area in Surrey they were permanently manned only until November 1940. However, in Northern Command the cratering and blocking of road and rail bridges was still continuing in January 1943, presumably because of fear of hit-and-run raids.

When one thinks of the thousands of road blocks that were built and the part they were intended to play, it’s such a pity that relatively few records (written or physical) of these humble construction remain. 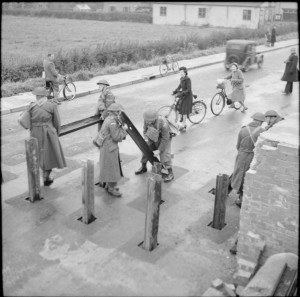