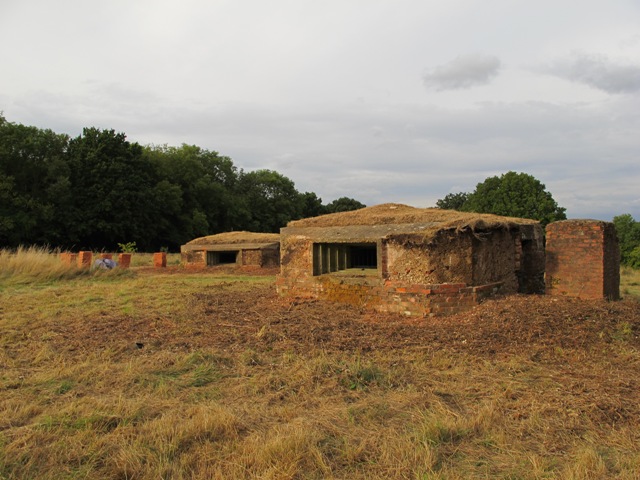 Just over three years ago PSG members completed the Rescue Archaeology on six of the 18 pillboxes that lay on Ministry land at Ewshot in Hampshire.

With permission from the MOD and Taylor Wimpey two pairs of Vickers Machine Gun emplacements and two bullet proof type 24 pillboxes were gradually released from many years of plant and tree growth and general neglect.

Prior to the work a complete survey was carried out for Hart Council on the 18 pillboxes that survive on the Southern Area, Riddings Copse, Shaw Copse, these also included the isolated examples beside Tadpole and Ewhot Lane.

From day one it was hoped to prolong the life of the defences by removing Hawthorne and Elder trees that were gradually eroding the brick shuttering, consultation was carried out with the local authouritys and work started in October 2009, one problem kept recurring, this was not being able to replace the outer brick shuttering that was peeling on so many of the defences. 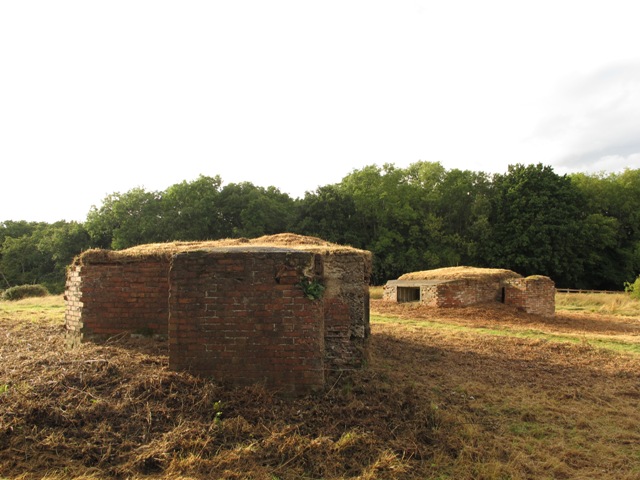 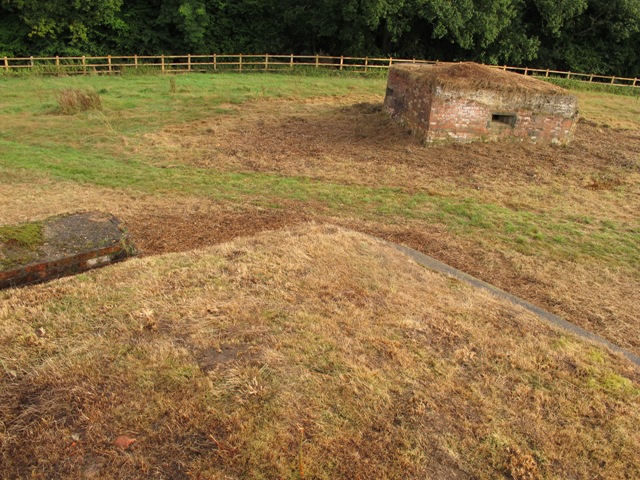 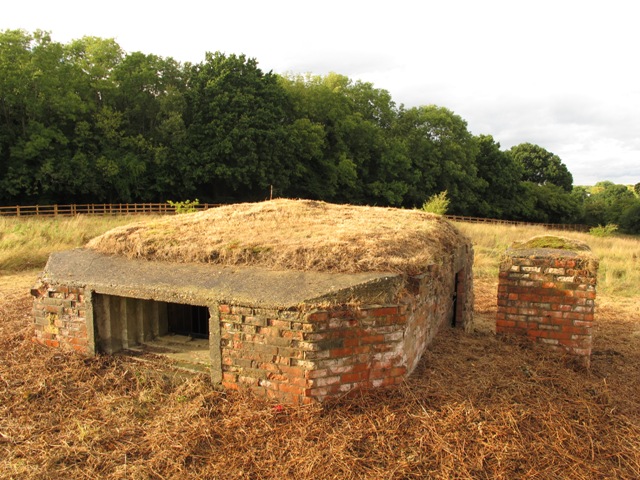 This has now been resolved and as of the first week of September 2013 work has started on replacing the poor and missing shuttering on two Vickers Machine Gun emplacements close to Riddings Copse. Contractors Ryan and Mark are working for ALS groundwork and have been busy removing the bad brickwork both by hand and with a pneumatic jack hammer, the shuttering is gradually being replaced with a modern red engineering brick which should ensure the survival of the defences for at least another 70 plus years. Consideration has been taken not to damage or alter the appearance of these gun emplacements, the vent is being left as are all of the cast embrasures, the grass covered roofline remains original. 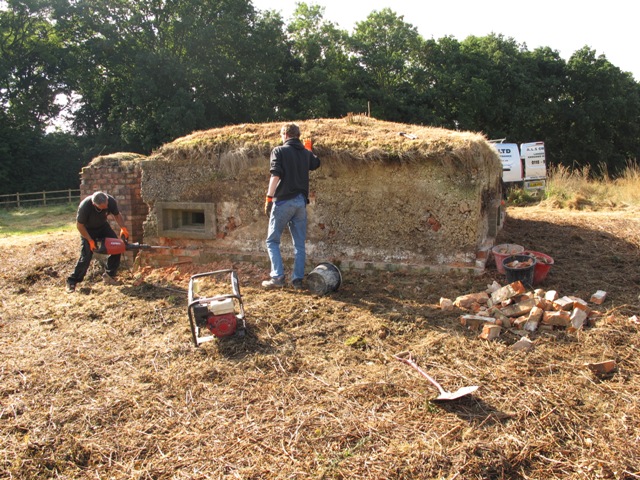 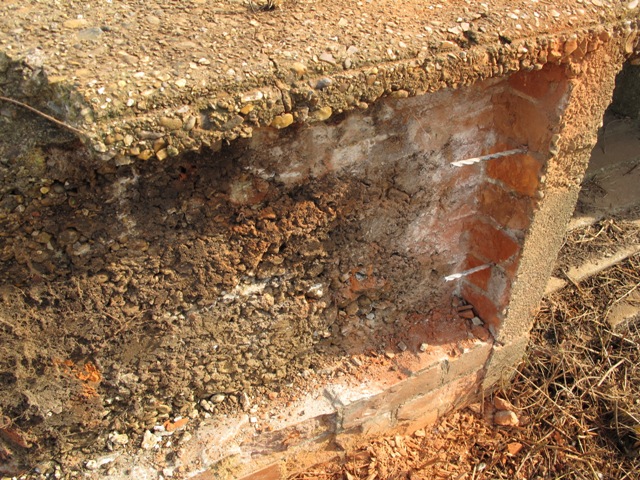 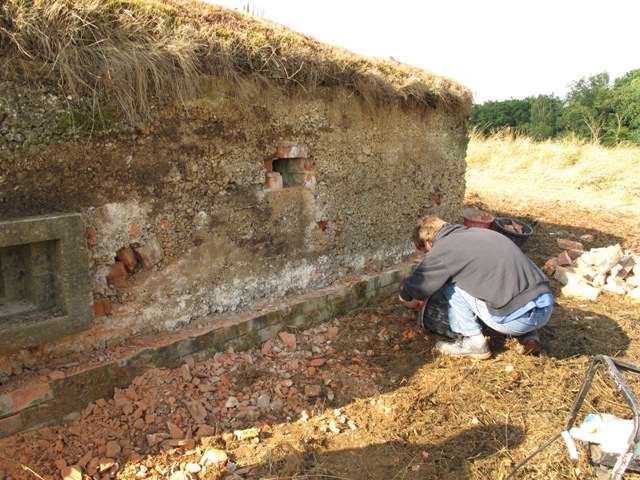 All of the pillboxes have been fitted with metal bar doors which will be locked top and bottom ensuring that wildlife can access but people and dogs cannot, the front main loophole on the Vickers is sympathetically blocked with a bar grille. 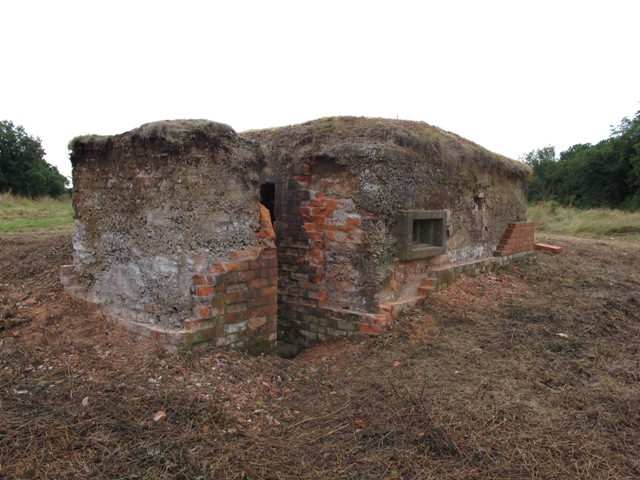 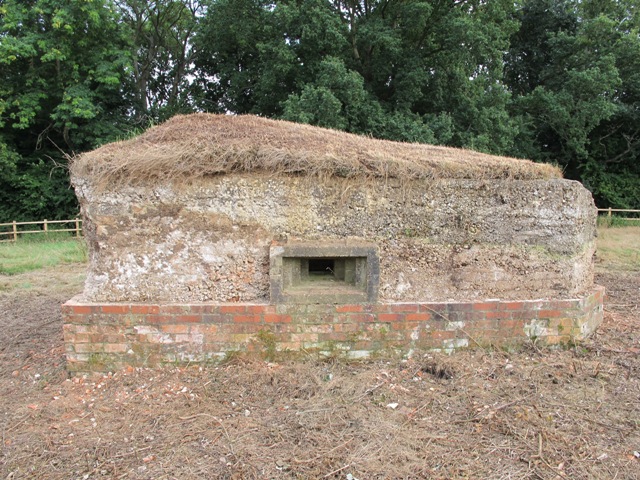 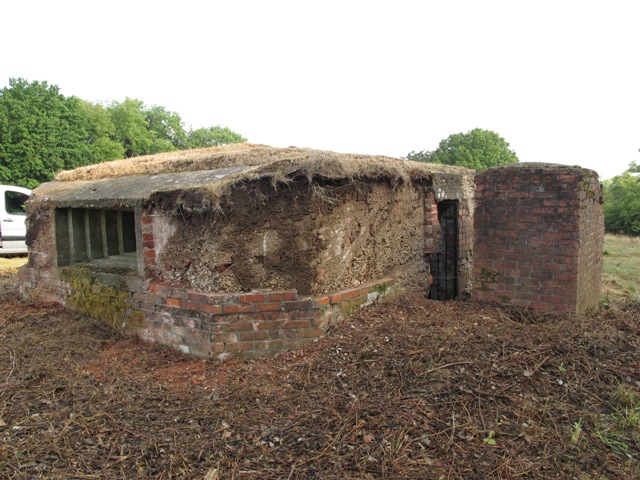 The interiors of all of the pillboxes are going to be cleaned out again allowing the inside to stay original, rubbish and graffiti free, small metal ramps are fitted within the entrances of the dug in boxes as an access for small mammals enter and exiting ensuring they are not trapped inside. 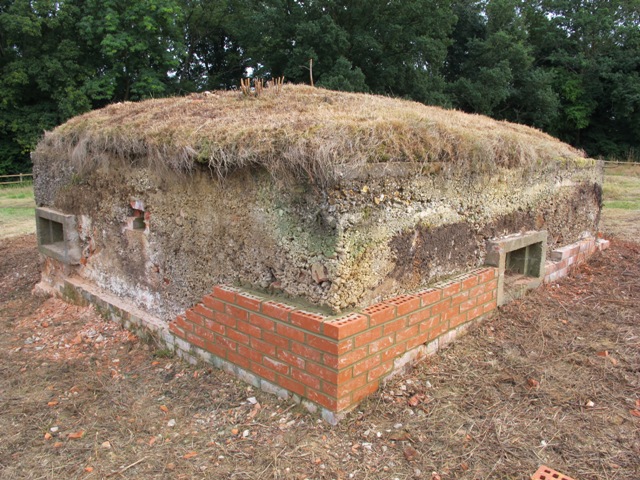 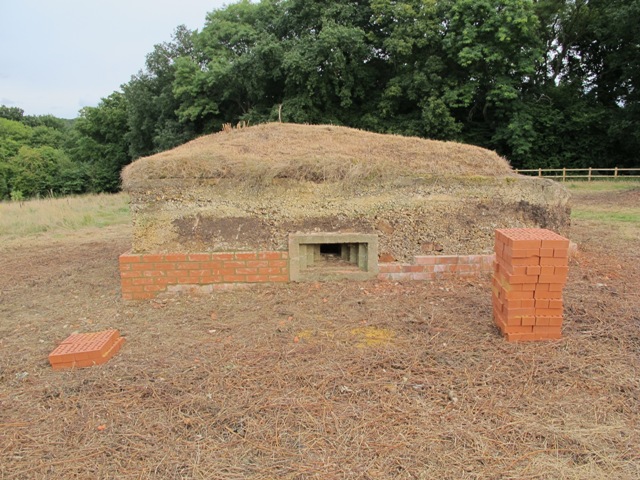 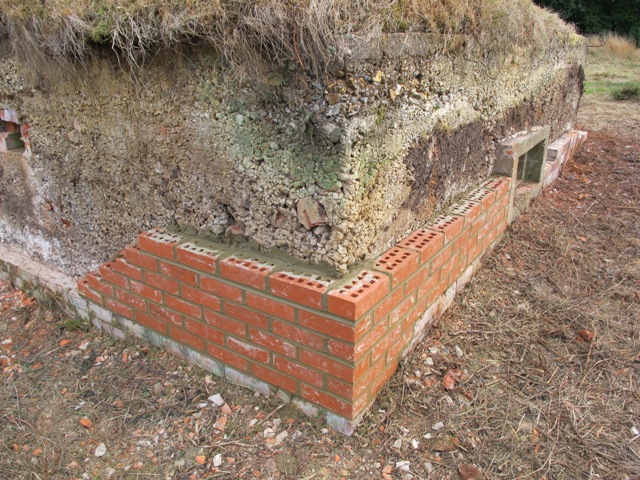 A type 24 close to the recreation ground is going to be totally sealed as a school time capsule not to be opened again for many many years.

Two of the more overgrown type 24 pillboxes are now more visible adjacent to the south side of Riddings Copse, as with the others these have metal gates fitted. 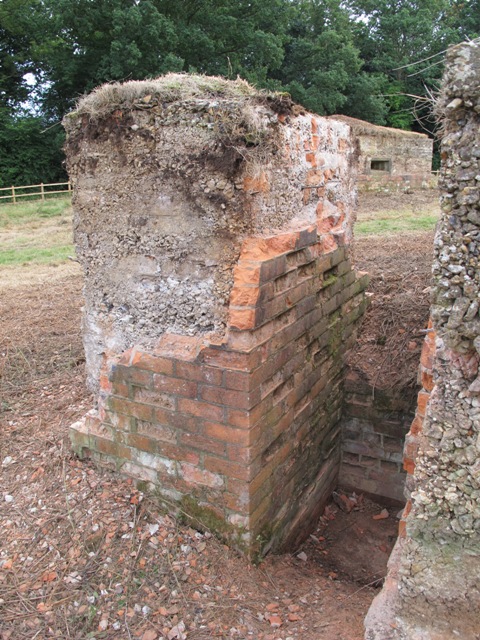 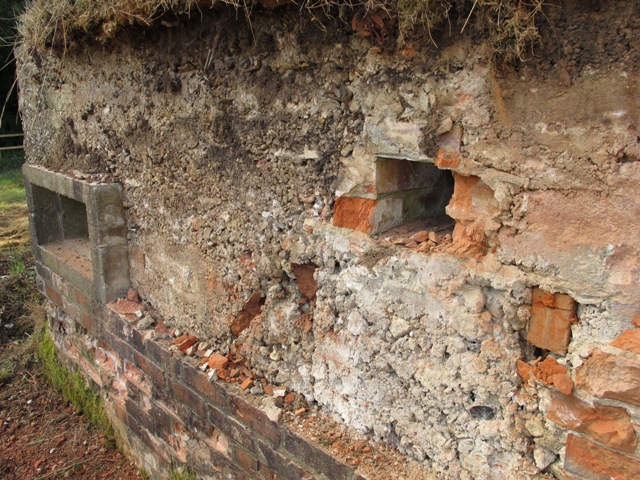 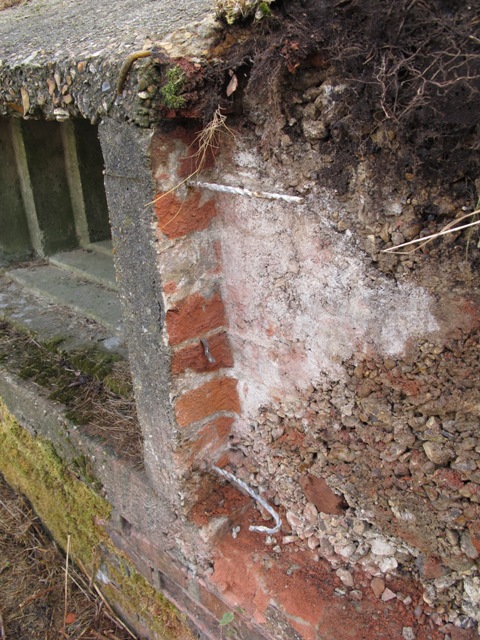 During the week progress has been made laying the replacement brickwork on one of the machine gun pillboxes, care has been taken to finish of top of the shuttering to blend with the roofline and around the cast embrasure.

This morning’s visit shows just how well the work is progressing, Anthony was working on the rear brickwork ensuring it is straight and level with a line. 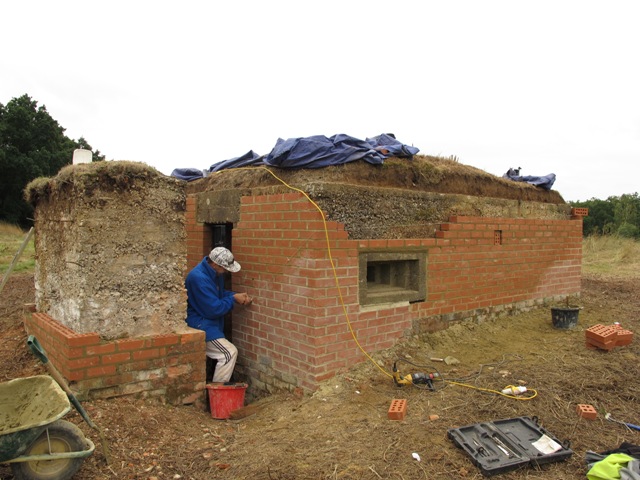 The old shuttering has been removed and transported away for landfill purposes, you can see that the fume vent has been formed on the rear wall and supported at present by a loose brick.

One of the last chances to view the interior on one pillbox showing the fitted loophole grille and lockable bar door. 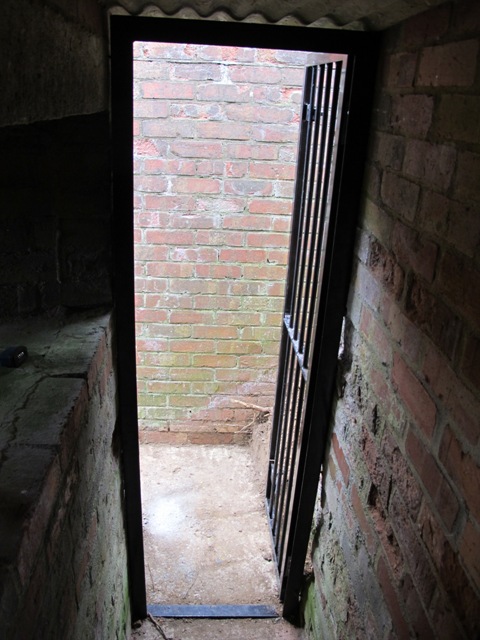 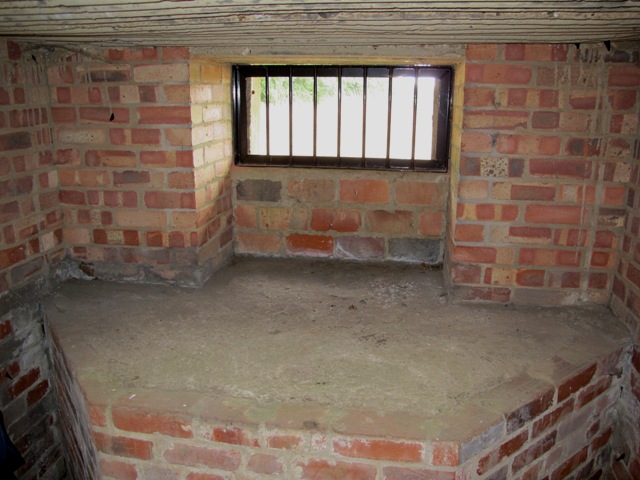 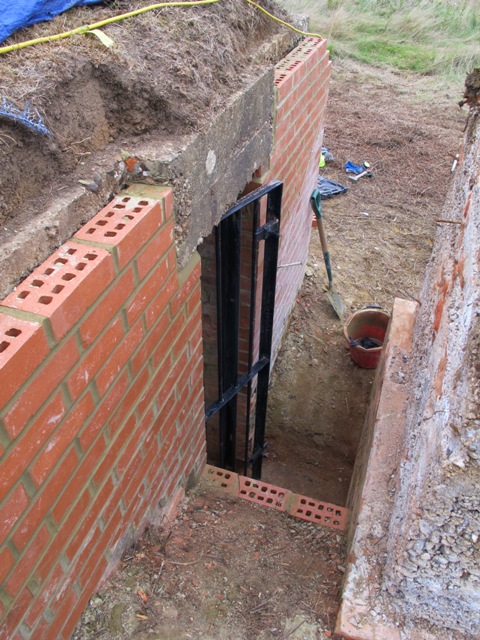 Once finished more of the camouflage net hooks will be inserted into the top of the walls by boring and cementing.

During our October 2009 work on these pillboxes great effort was made to remove a stubborn stump between the blast wall and pillbox, we were not totally successful but i was informed by Tony this morning that it took them many hours of work cutting and chiselling to finally remove it completely. 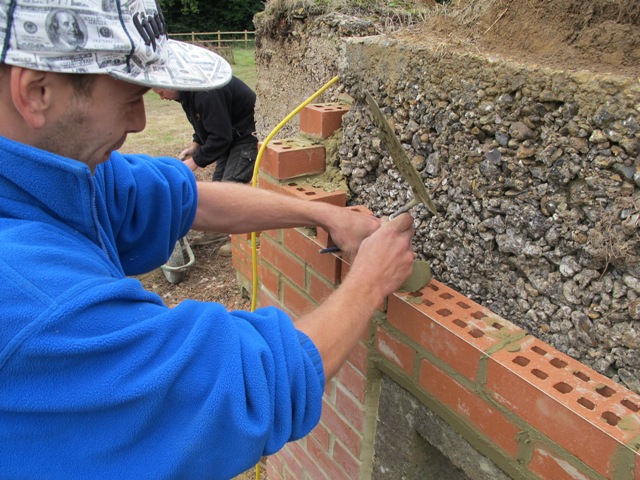 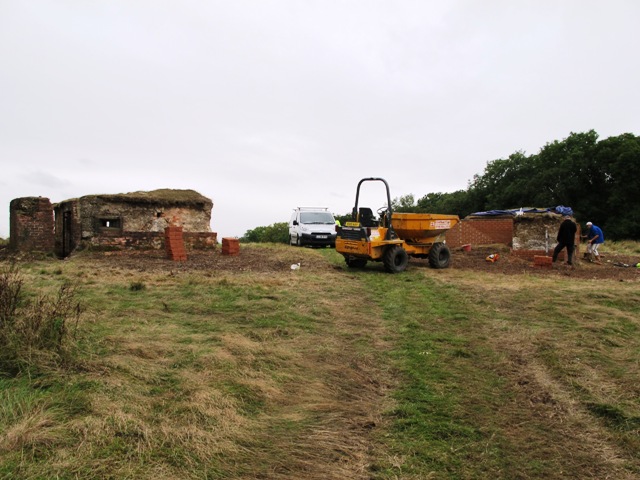 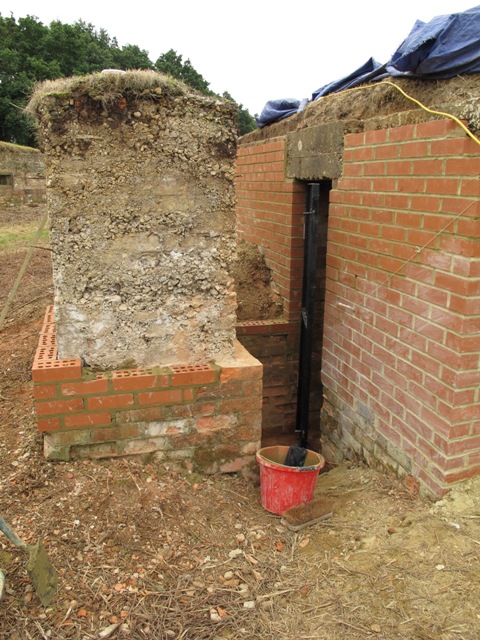 Work is continuing on the the second pillbox with much of the old shuttering now removed from all sides as well as parts of the blast wall. 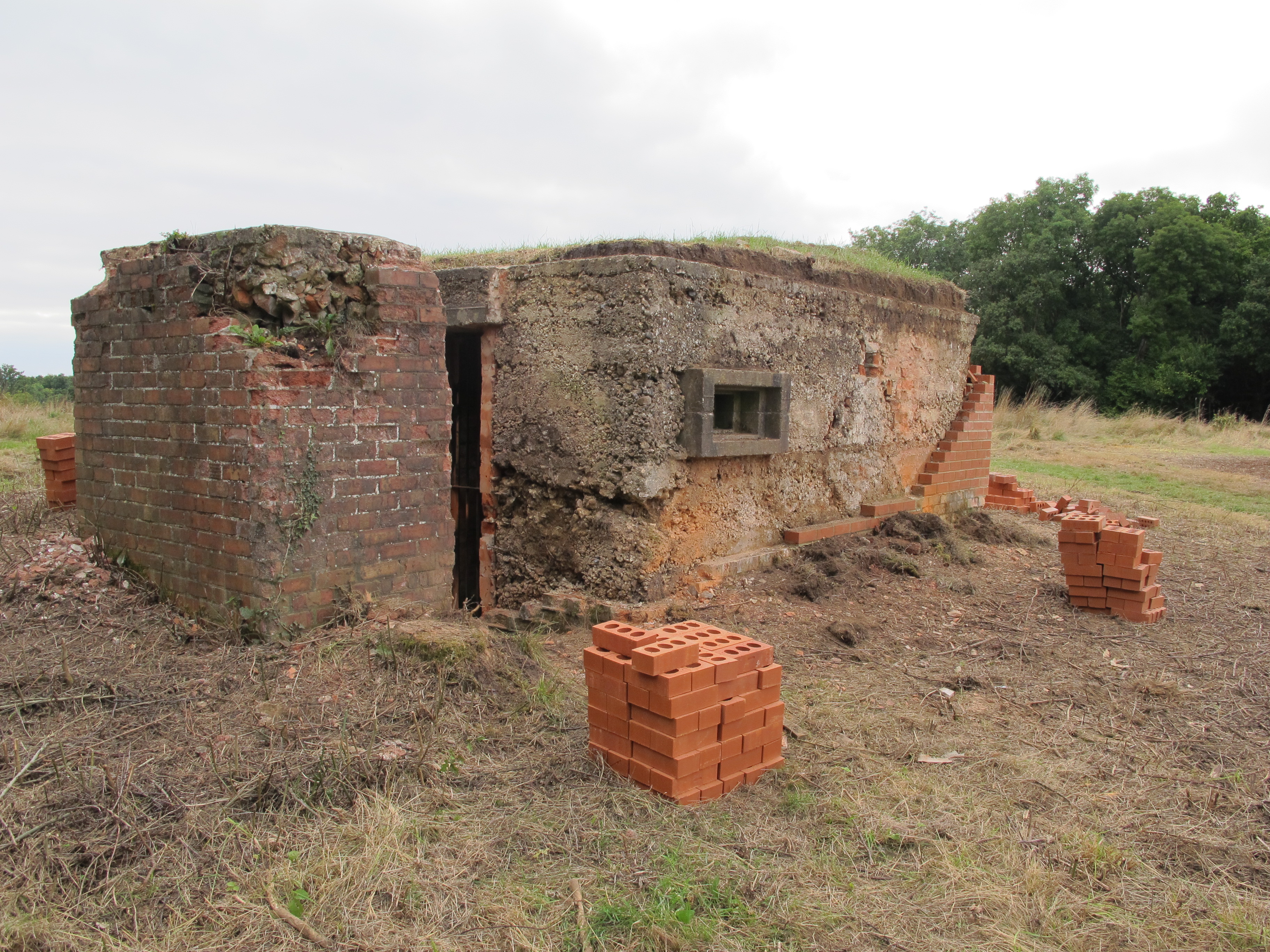 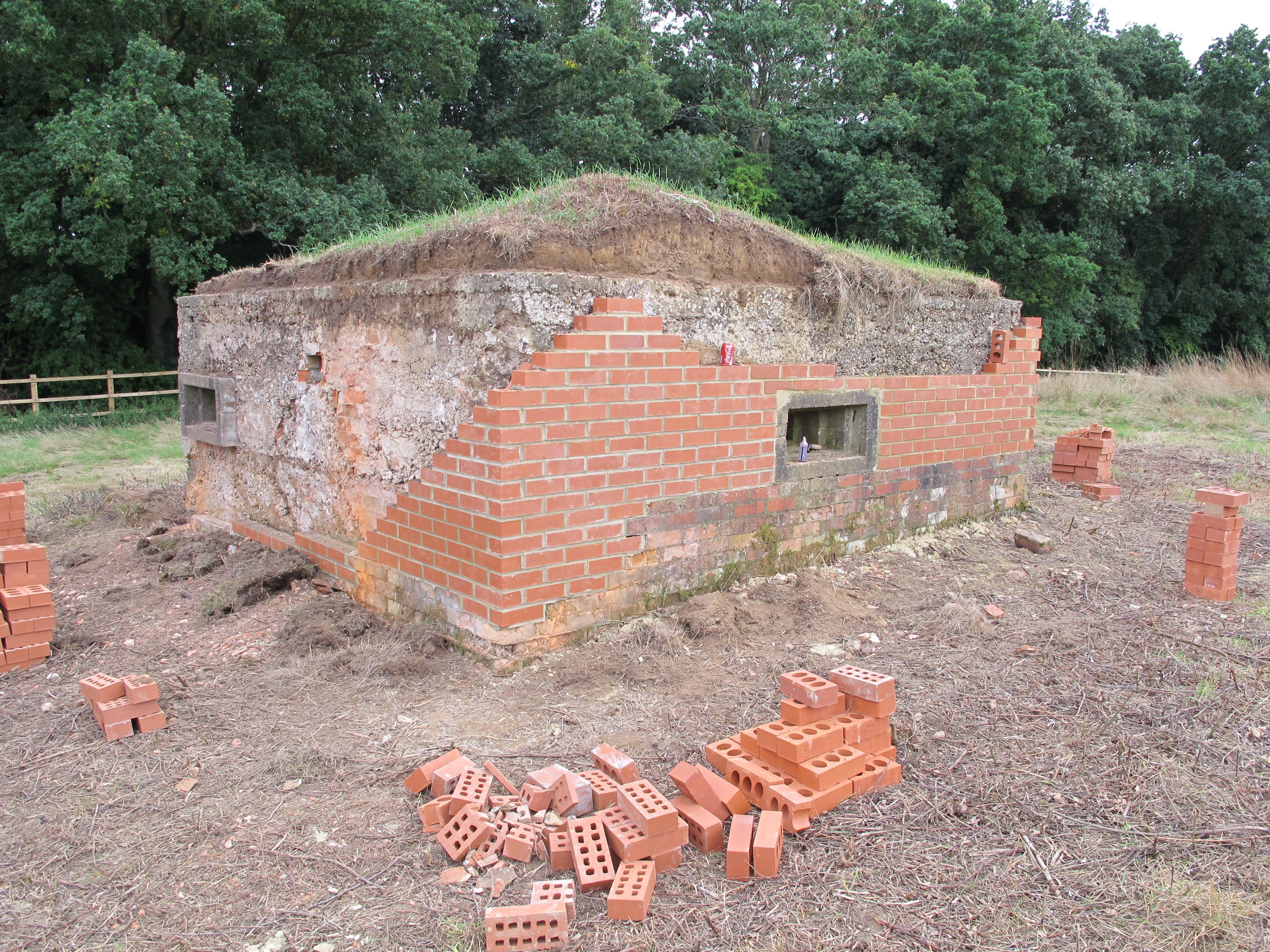 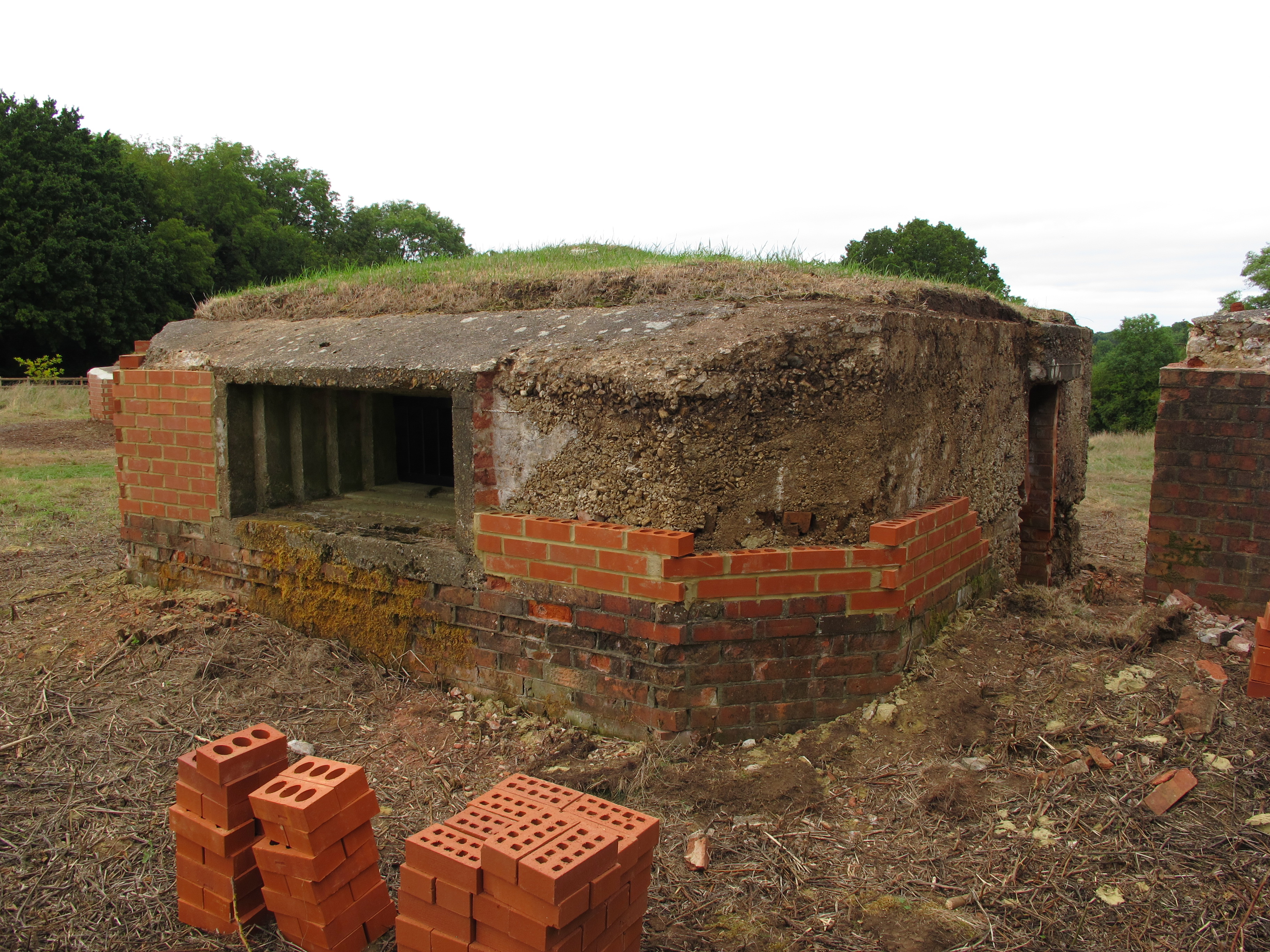 As the month draws to a close it brings with it a completion of work on both Vickers emplacements, the project continues with repairing the other Vickers pair and a type 24 close to Ewshot village. 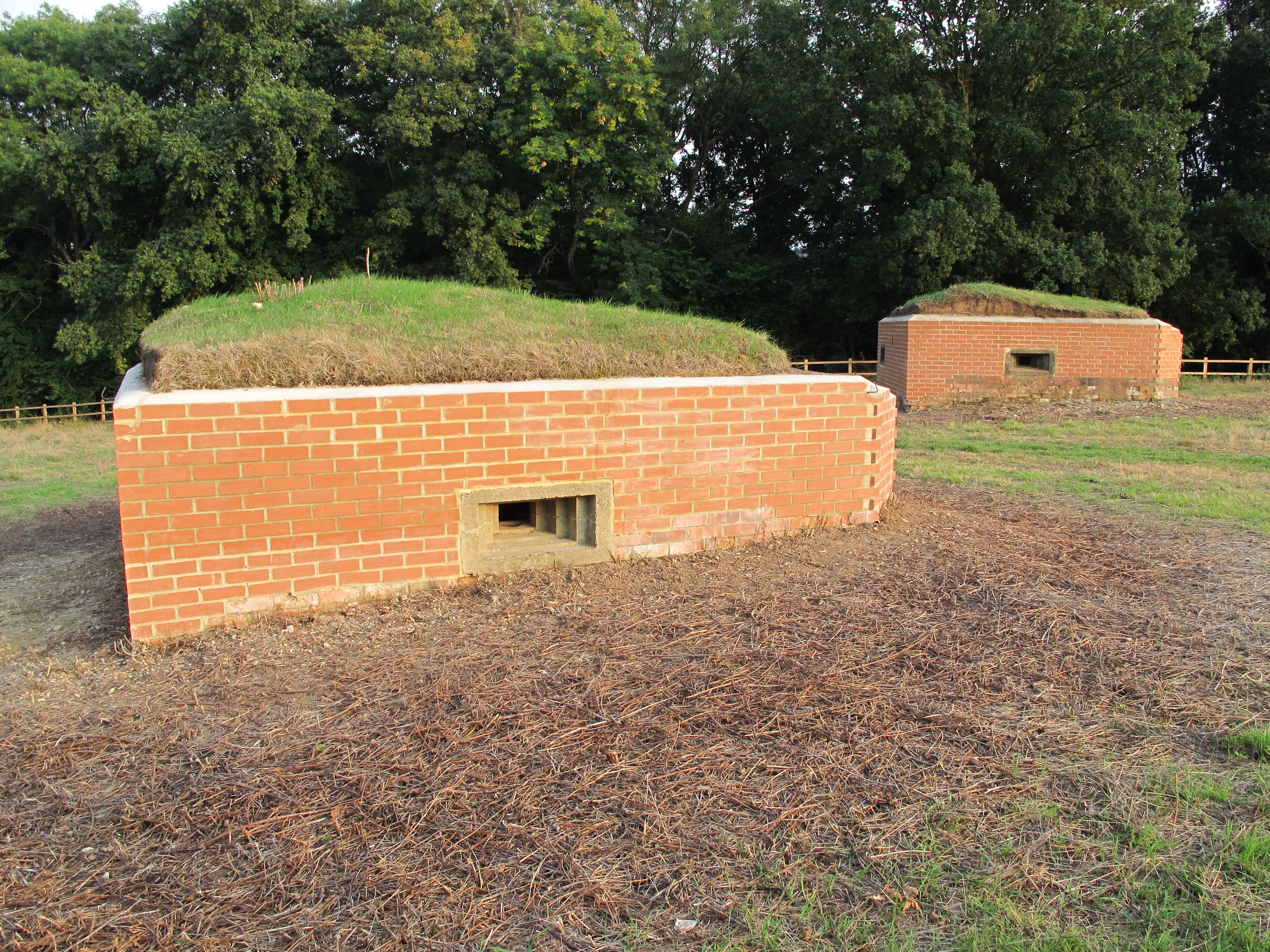 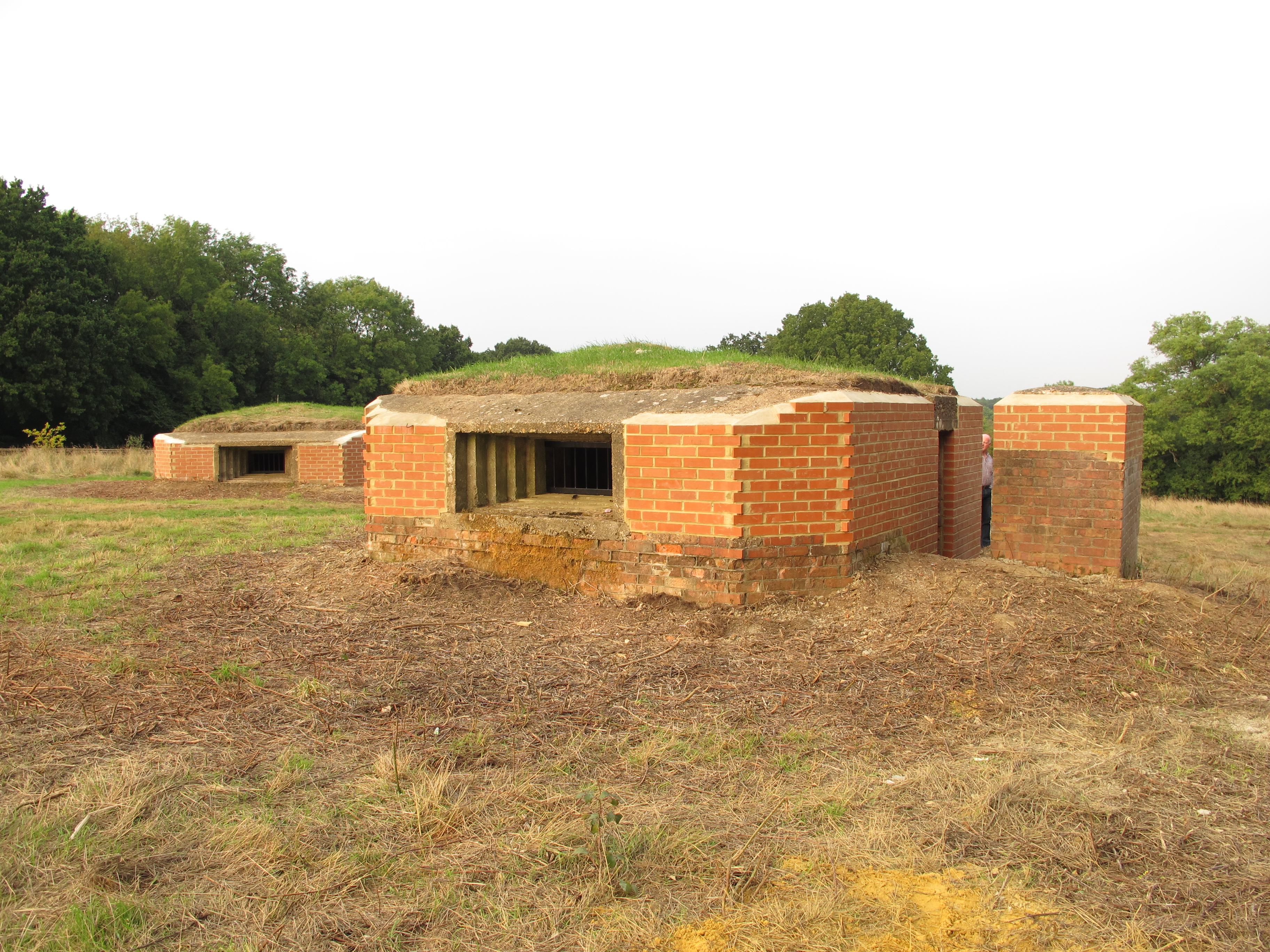 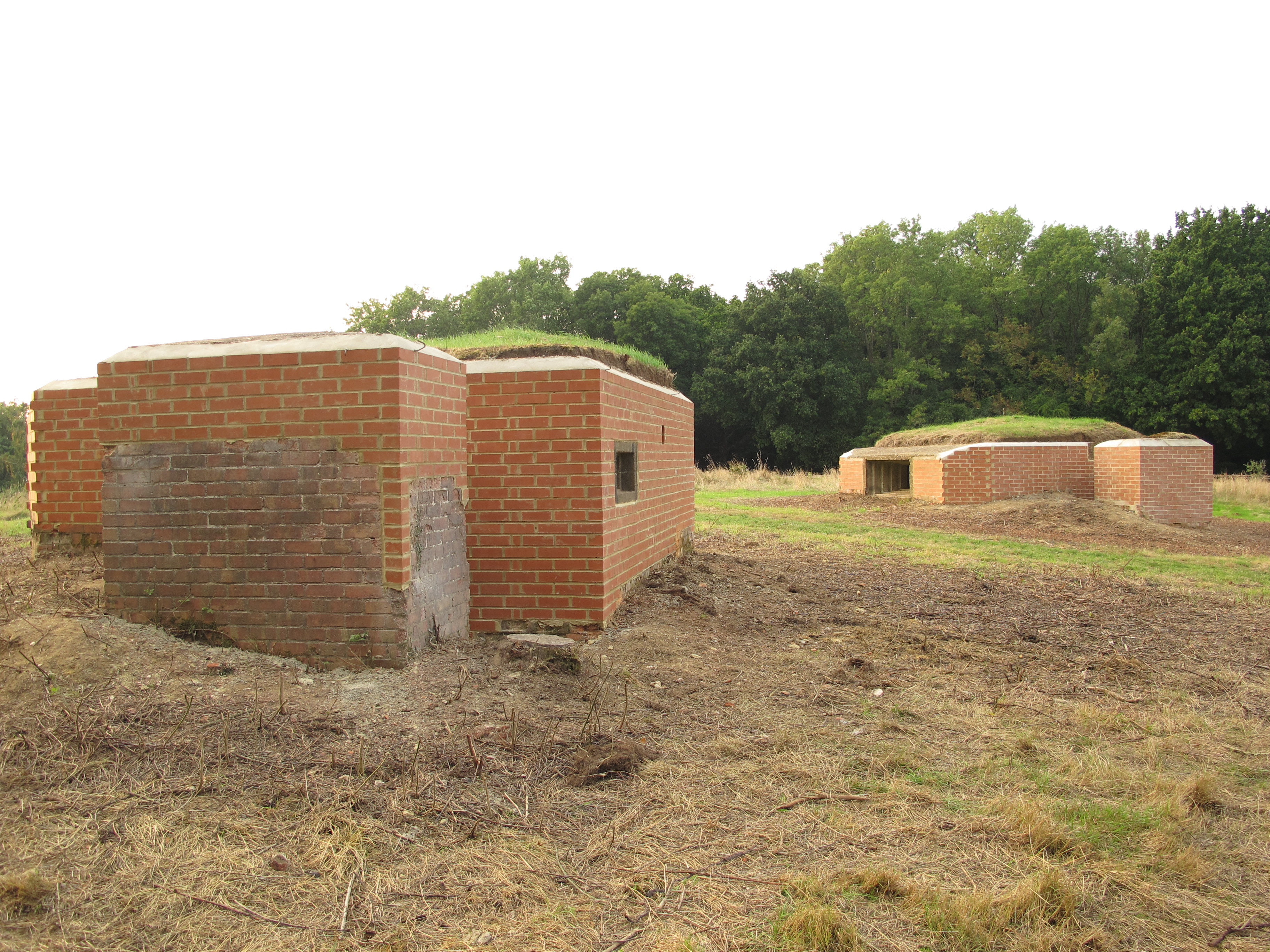