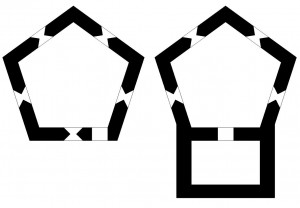 Pentagonal pillboxes, as the name suggests, are regular pentagons in shape. This general type appears to be an Air Ministry design as the remaining examples are only found on or close to airfields, there are 19 examples still extant. Some examples have embrasures in all the faces with a low door offset to one side in the rear face. Others have a central door and no embrasure in the rear face. There appear to be two sizes, probably representing thick walled and thin walled versions only two of the large examples exist though. The larger variant has walls approximately 4.5m long, the smaller has walls approximately 3m long. Some of the smaller variants have a fully enclosed rectangular AAMG well attached to the rear wall which also acts as a blast wall for the entrance.