Turnbull mounts were not exclusively used for mounting Vickers machine-guns but Brens, Lewis, water cooled Brownings and Hotchkiss MGs could all be used, there was even a request from Bovington if a gun bar could be designed for there Besa Machine guns. I suspect in fact that Bren guns were the most common weapon mounted (simply because an infantry division held 1,262 Bren guns against only 40 Vickers MMGs) even then I suppose they were only fitted when on alert. Turnbull mounts were issued from 1941 onwards, so those found in C1940 pillboxes were fitted later. Each mount need 4′ 9″ of space between the loophole and the back (baffle) wall to allow the gunner room to position himself behind the mount. 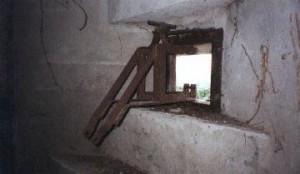 The mounting consisted of three parts:

The frame is a rectangular component made of angle iron and providing upper and lower pivot bearings for the cradle. The frame can be built into loopholes of pillboxes, built into sandbag emplacements by being attached to transverse iron or wooden members by bolts or wire, or fitted to holes knocked in walls, use being made of uprights supported by spurs.

The frame is stamped or stencilled on the inner side “top”, and “this side towards firer”.

The cradle is the component which pivots at the forward end upon the upper and lower bearing pivots of the frame. The elevating gear is incorporated in the cradle, and forward and rear mounting points are provided on to which the gun bars which carry the various guns are mounted.

The rear mounting point is on the top of the elevating gear.

The cradle is mounted and dismounted from the pivot bearings of the frame, by being lifted above them and lowered gently on to them.

On the top of the cradle is a traversing clamp which acts in conjunction with the traversing arc of the loophole frame.

Gun bars for the following weapons are provided:

(There is no Gun Bar for the stripped Lewis Gun, a sandbag as a rest in the loophole is all that is essential for this weapon.)

Each Gun Bar is provided with mounting points, fixing pins and securing bands to suit the particular weapon it is designed to carry.

Each Turnbull mount (also known as Mounting Machine Gun Loophole) had a traverse of 90 degrees, elevation of 11 1/2 degrees and depression of 12 degrees

A complete set of equipment consisted of one cradle, one Vickers Gun Bar and one Bren bar. Other Bars were issued as required. loophole frames were produced at a rate of two to each equipment set.

A number of mounts in my area (Norfolk Suffolk border) have steal tubing and a recess built into the embrasure below the Turnbull Mount presumably to hold the condenser tube of the Vickers MMG.

Hope this may be of interest to PSG members.

This mount is associated with the `Mushroom `Pillbox design. 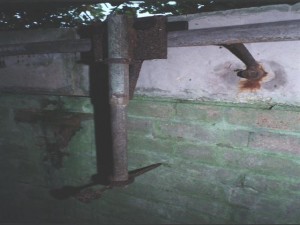 The idea was to fix a machine-gun, probably something like a .50 calibre, on to the mount which then moves on the circular scaffolding type metal pole fitted around the interior of the structure.