It is probably not appreciated what an interesting and diverse subject it can be-literally a study in itself. It has much in common with Army-based defences, as you can never be sure what you are going to find! I’ve divided the subject into two sections: a short history, followed by how to go about finding and researching examples of the Air Ministry’s defensive craft.

To begin with, airfields are not easy places to defend. They cover a good many acres, have a perimeter often several miles long, and the topography can vary hugely: hills, hollows, woods, hedges, lanes and roads, to name a few problems.

Before WW2 the general policy of airfield construction was to group most of the buildings together in one area, as typified by Expansion Period airfields of the ’30s, with aircraft parked in neat rows outside hangars. But with war clouds gathering in 1939 dispersal of aircraft around the perimeter of an airfield was introduced. Even at this stage defence rarely consisted of more that a few light AA machine guns at appropriate points, attack by ground forces not having been considered. But in September 1940 the rapid advance of Germany through Europe brought home the very real threat of invasion and the need for proper defence of airfields from attack by air and ground forces. 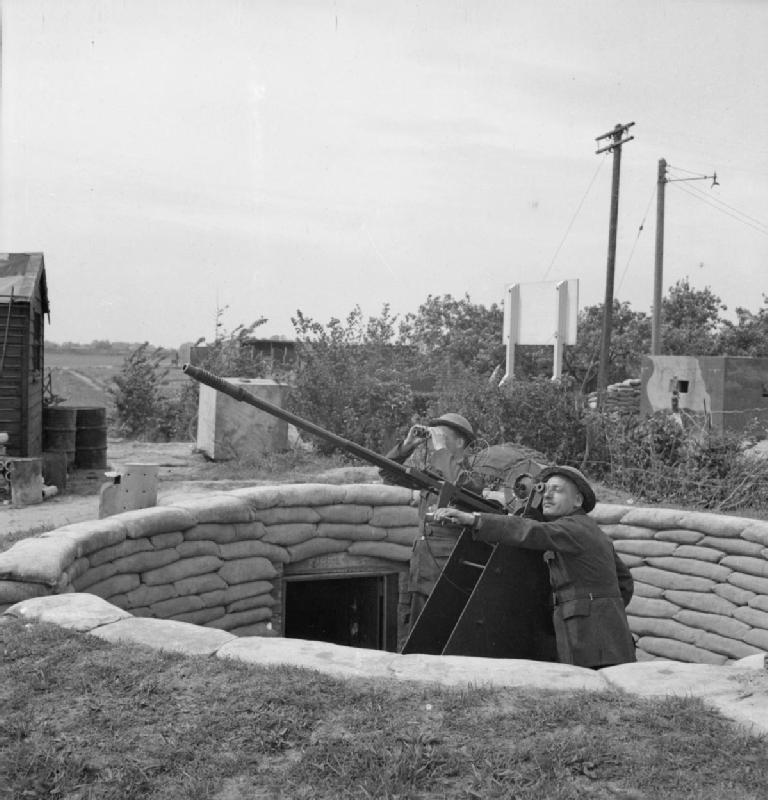 As has been noted, because of innumerable variations in airfield topography it was impossible to form any standard design and layout of defence works so, as with Army-controlled defences for towns and coasts, the Local Defence Commander worked in cooperation with the airfield Station Commander to plan the design and layout of the defences for a particular airfield. This, of course, helps to explain the huge variety in design of pillboxes and any allied structures, from the ingenious to the downright dangerous! It is quite common to find a defence work that is unique to a particular airfield.

The work got under way in earnest with simple tasks such as trench digging and erecting Dannert wire being done by airfield personnel and building work executed (usually) by local contractors, who worked from drawings prepared by the Air Ministry Works Directorate (A.M.W.D.) who in turn had based them on sketches supplied by the local Defence Commander and Station Commander. One must remember that these drawings may well have been prepared hastily from poor sketches, so errors commonly occurred as the A.M.W.D.’s resources were stretched to the limit providing new airfields and improving existing ones.

Over the next few months further delays occurred, with alterations in the design and layout of defences being made owing to changes in tactics and improved weaponry as the war progressed.

In May 1941, after Crete, the concept of a ring of defensive posts around the perimeter of an airfield was abandoned in favour of strategically placed strongpoints to cover the ground and approaches of the airfield, with each post “…as far as possible being mutually supporting and selfcontained…”. “Strongpoint”, of course, does not necessarily mean pillbox. It can also be an adapted building or a well-engineered set of earthworks. By June 1941, 170 of the well-known Pickett-Hamilton pillboxes had been installed at the instigation of Winston Churchill but in March 1942, after 335 had been emplaced nationwide, Bomber Command decreed them useless and instructed that no more were to be built. The defence of an airfield was to be controlled from the Battle Headquarters. Whether or not you find one on any particular airfield is still, apparently, a matter of luck, so you may be fortunate.

By mid-1941 the defence of airfields was considered so important that when a new airfield was planned its defence came second only to runway layout, and above accommodation and other services. In July 1941 a General Defence Strategy was agreed, placing all airfields in one of three classes depending on location and importance, from Class 1 with the greatest provision for pillboxes, modified buildings, rifle pits etc, to Class 3, which frequently ended up with only rifles points and Dannert wire. That, of course, was the ‘planned strategy’: what happened in practice was often different. Not all defences were fixed – many airfields utilised adapted lorries and other vehicles mounting a variety of weapons for quick deployment in the event of an attack. Armadillos and Beaverettes are well-known examples. 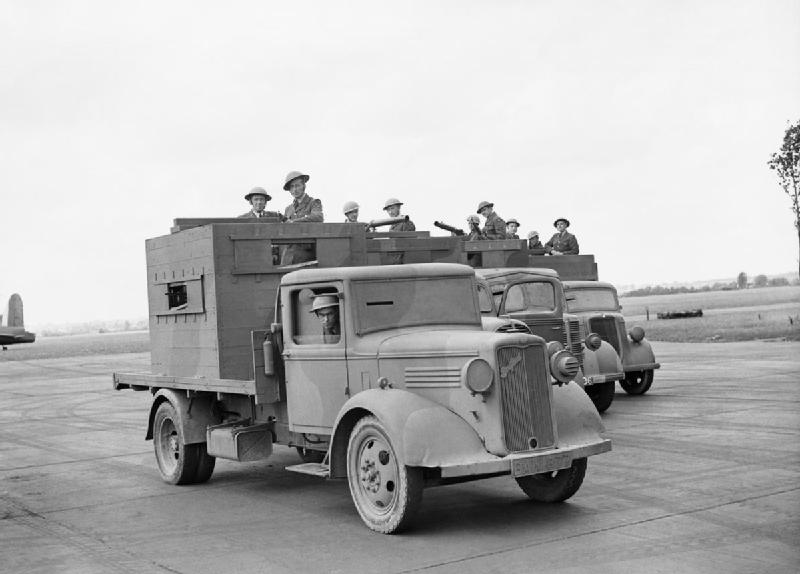 In February 1942, much to the relief of the Army, the R.A.F. Regiment was formed and given sole responsibility for defending all R.A.F. installations on the country, thus releasing the Royal Artillery gunners from having to man airfield AA defences. The Regiment personnel had their own messing and accommodation facilities on separate ‘Defence Sites’. These sites rarely comprised more than Nissen or Maycrete hutting, so don’t be led into thinking that fortifications can be found on them.

About this time there was also a recommendation that existing pillbox walls be made at least 3ft 6ins (1.1 m) thick and loopholes reduced to two in order to counter German anti-tank weapons then in service. This probably explains a number of ‘skirted’ pillboxes such as TM 338 383 at Bawdsey and TL 661 659 at Snailwell. Also, only light machineguns were to be mounted in pillboxes with any resultant blind spots covered by riflemen in carefully sited trenches. Again, evidence of this may be sen in the frequent fitting of Turnbull mounts in R.A.F. pillboxes.

The U.S.A.A.F. 8th Air Force had a different philosophy (don’t they always?) on airfield defence.

When they began to arrive in late 1942 Britain considered the invasion of airfields by enemy forces unlikely. The Americans, however, remained almost paranoid about the possibility right up to D-Day in 1944. To this end, with the exception of Battle H.Q.s (or Emergency Control Bunkers in their indomitable terminology) they tended to shy away from any ‘fixed’ defences, relying instead on vehicles loads of G.I.s, armed to the teeth, who could quickly be rushed to any trouble spot. These were supplemented with heavy machineguns in twin and quad. mounts on the backs of trucks for use against air and ground targets.

From the end of 1942, with the tide of war turning, no further pillboxes were built, those already in existence gradually becoming handy store-rooms, sentry posts or illicit meeting places for off-duty personnel!

After the war many pillboxes and other fixed defences were destroyed in demolition exercises. Fieldworks were, in the main, back-filled and more, of course, will have been lost in land clearance and urban development. But as any good ‘pillboxer’ will say, you never can tell!

An interesting reversion to early wartime philosophy is the so-called ‘Yarnold Sanger’ invented(?) by a Sqdn Ldr Yarnold of the R.A.F. Regiment, who apparently ‘hit on the idea’ of assembling them from separate concrete segments. Pity ‘Mr Norcon’ didn’t have a patent!

Adapted from an article first published in `Loopholes’ Journal No 17