George Dawes and Mark Bond have located an example of an Auxiliary Unit radio hide, and in the course of researching the Auxiliary Units for the Defence of Britain Project I have come across some other interesting information on these structures.

In an interview with Arthur Gabbitas(1), a former Royal Signals Corps corporal who served with the Auxiliary Units it was revealed that each unit had a radiomechanic and two wireless operators, with four out of five out-stations manned by civilians.

He described his underground station as having stores, water and a separate chamber with a battery charging generator. There was also said to be an above-ground hut for day-to-day working. 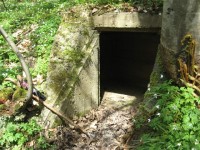 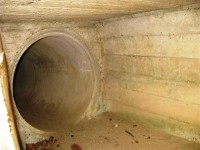 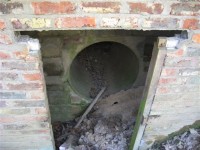 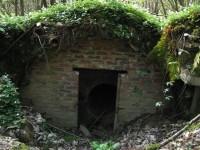 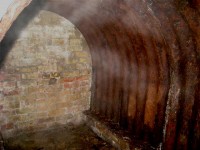 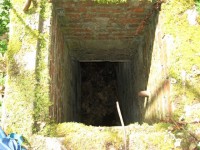 Approximately a nine foot drop to bottom of Auxiliary base, East Sussex.

He elaborated on his role(2), describing a network of stations operating in Lincolnshire, Norfolk, Suffolk, Essex, Kent and Sussex and elsewhere.

Members of the Home Guard Auxiliary Units, recruited from local countrymen, knew nothing of the radio operators, but there is mention of 100 regular signallers and 43 women of the Auxiliary Territorial Service (A.T.S.). The latter name is unconnected with the Auxiliary Units, the A.T.S. being simply the title of the women’s service of the Army. Miss Beatrice Temple, later Mayor of Lewes, was a senior commander of these members of the A.T.S. (3) One of the hides she visited was in Heathfield Wood near Hailsham. Down a 30ft shaft was a small room which contained munitions, but a secret switch gave access to the main bunker with two rooms with more munitions, a cooker, bunks, generator and separate compartment for an Elsan toilet. In
common with many Auxiliary Unit hides there was also an emergency escape tunnel leading away some distance. 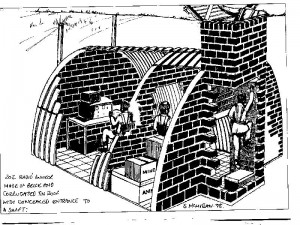 I had initially assumed that the civilian out-stations referred to were Auxiliary Unit bunkers, but these lack the aerials seen in the Holderness example. An interesting interview with an anonymous source in Hailsham(4) describes a network of civilian informants, expected to continue their normal lives after a German invasion. If any interesting information came their way they would report to one of a number of contacts, via secret ‘letter boxes’ if necessary.
The messages would then be transmitted by civilian wireless operators with sets secreted in their homes or work places, for example under the outside toilet on one farms. This source stressed that he was not a member of the Auxiliary Units, nor did he have a secret hiding place, but understood that any suggestion of compromise would result in a swift execution of those suspected or captured.

There would therefore appear to have been an information system to identify targets for the saboteurs of the Auxiliary Unit patrols set up across the country. Even now, little is known about the secretive Auxiliary Units, or the even more secretive signals section. 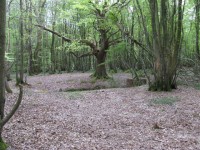 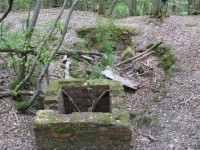 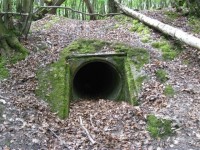 3. Hailsham and its Environs, Charles Roberston, 1982

By Dr William Ward. Adapted from Loopholes No 16

All photos thanks to PSG member David Ottway