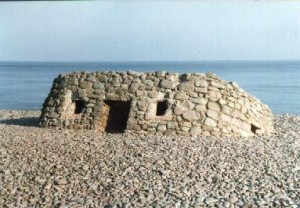 The basis of this article is

It is intended to show the official line and from personal experience in the South West contrast this with the actual methods used by the military `on the spot` as it were.

The ‘positive’ knowledge base on camouflage used in the SW would at first seem to be scant as very little genuine primary source data exists showing camouflaged pillboxes. However, by reading the Camouflage pamphlet and studying the exact location of the pillboxes there is much more information available than at first thought. There is also a limited amount of what might be referred to as ‘secondary’ information. This is where I have been told by one individual that a particular pillbox was camouflaged in a certain way, but I have no corroboration from a second person. This latter information refers almost exclusively to the second class of camouflage, disguise.

In this pamphlet the chapter concerning Pillboxes is split into 5 sections:

“The principal to be followed should when possible be that of merging with the background by ellimination of shadow and the distortion of silhouette…..Many Pillboxes are sunk into the ground and in all cases the lower the roof the greater is the chance of concealment”.

There is a great deal of primary evidence for this form of concealment to be found around the country. The most common being the burying of the pillbox upto the level of the loops. 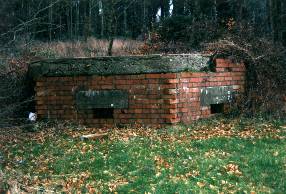 Half Buried Pillbox on the Maiden Newton to Poole Harbour Stop-line, West Dorset

Having buried the pillbox rigging ropes and where required poles would be set out in a circle to support the netting. This would then be spread over and pegged into place. Lastly the netting would then be garnished with suitable local material to complete the effect. 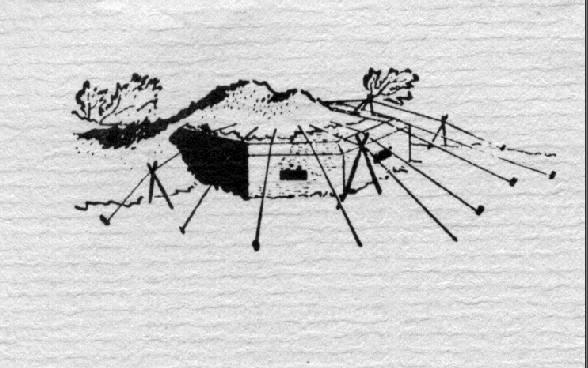 The next common indicator to be found is a bank or mound, whether man-made or natural, with the pillbox built into it. Again, this method is to be found in most parts of the country. The same general treatment as above would then be carried out to complete the merging into the background. 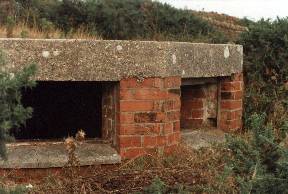 The last method in the pamphlet is the building of the pillbox into a hedge line and then using natural materials to merge the shape into the natural shape of the hedge. The later is the most common method of camouflage to be found throughout the inland defences. It is almost certain that any pillbox built into a hedgerow or into the corner of a field was camouflaged in this way. This method has the added advantage of using the hedge to cover entry paths, which often gave away the location of an otherwise well concealed pillbox.

The doctrine of merging was taken to new heights in the West Somerset area. Here there were at least seven ‘Earth’ pillboxes. The builders first constructed a breeze block and brick wall to the internal dimensions of the standard polygonal pillbox. Then loopholes were cast and fitted into place. Then the whole thing was built up with earth to roof height and a six inch (15cm) thick concrete roof was added and then the earth carried on over to merge the whole thing into the background. Even today, unless you know where to look there are some of these that you just won`t find!

“Whereas the discipline of concealment must never be relaxed, disguise should only be used to achieve specific results on particular occasions. In the case of pillboxes, it should be used only on occasions when the result aimed at is beyond the scope of concealment by merging.” 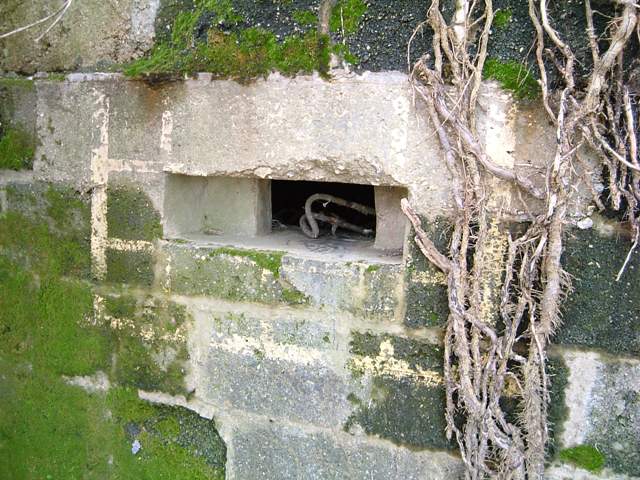 False window frame painted on the side of a Type 26 Pillbox at Axminster Ngr SY290980.
Picture by Tim Denton 2004.

“The advantage of disguise….is that once seen through, a disguise may be useless…A disguised pillbox, once identified, is usually easy to see…”

There is ample evidence that this policy was taken very much to heart by the military. In the whole of the SW area I have only eight definite examples of disguise used for pillboxes. The interesting thing is that most of them could have used merging to make them much more effective. In each case the disguise was a building: in two of the instances the the pillboxes are on the Taunton Stop Line (TSL), the rest are on the Coastal Crust.

First the Taunton Stop Line: the first of the disguised pillboxes was a very clever reproduction of a small cottage, complete with garden, that had burnt out. Once the defenders had opened fire and consequently exposed the pillbox, it is highly likely that the attackers would assume the disguise to be just what it seemed to be and not realise for sometime that the building was in fact a pillbox. In this particular case the disguise may actually be better than merging.

The second TSL pillbox is completely illogical. It was disguised as a summerhouse, half way up a lane on a hedge. I can find no excuse for the pillbox not to be merged, particularly as there was no suitable large house nearby for the pillbox to be summerhouse too! 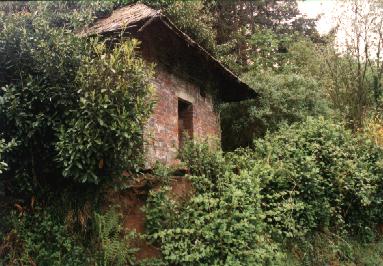 Pillbox Disguised As A Summer House

On Porlock Wear Harbour there used to stand an old rusty roofed store for fishing tackle and the like. The odd thing about it was that it was rusty on the day it was built, early in 1940! A few miles down the coast at Minehead there was a line of closely linked pillboxes and sand-bagged bunkers all along the beach. The most obvious extant example of this line is to be seen in the car park of the Minehead Golf Club (see ‘Pillboxes’  by Henry Wills`p.53). If the enemy had broken through this line they would have been faced with a rather unpleasant slog across a wide flat boggy area, now drained and occupied by Butlins Summerwest World holiday camp. This unhappy wade would have been made even more uncomfortable by the small outhouse behind the golf club, in fact a pillbox housing a Vickers H.M.G and the rough timber farm building on the other side of the marsh, yet another disguised pillbox.

Inland from Minehead can be found a small building, complete with shingle roof, overlooking a narrow country lane. Once again all is not what it seems. In this particular case it is very difficult indeed to understand just why they used disguise rather than merging. The pillbox is high on a bank, with the hedge running right up to it. The only clue that remains is that they built the roof at an angle to the pillbox, thus attempting to indicate that the building faced in a different direction to the road, though quite what this was supposed to do once the pillbox had opened fire is still a mystery to me.

The last of the disguised pillboxes in the West Somerset area was close to Watchet Railway Station. A small but elegant beach cottage, resplendent with veranda and all!

In the case of the eighth pillbox the camouflage office had little or no choice. It stands proud, three stories high on the embankment of a bridge in Bridgwater. There is no way that this monster could be merged with anything, so they roofed it and gave it painted canvas windows and relied on surprise!

These examples are not of course the only ones in the country that were disguised, in fact hundreds were so camouflaged. Barns, mills, cottages, milk parlours and haystacks, fun fairs, ice cream parlours and cafes, but compared with the number of pillboxes built it is certain that the official line: disguise should only be used to achieve specific results on particular occasions was adhered to quite rigorously. 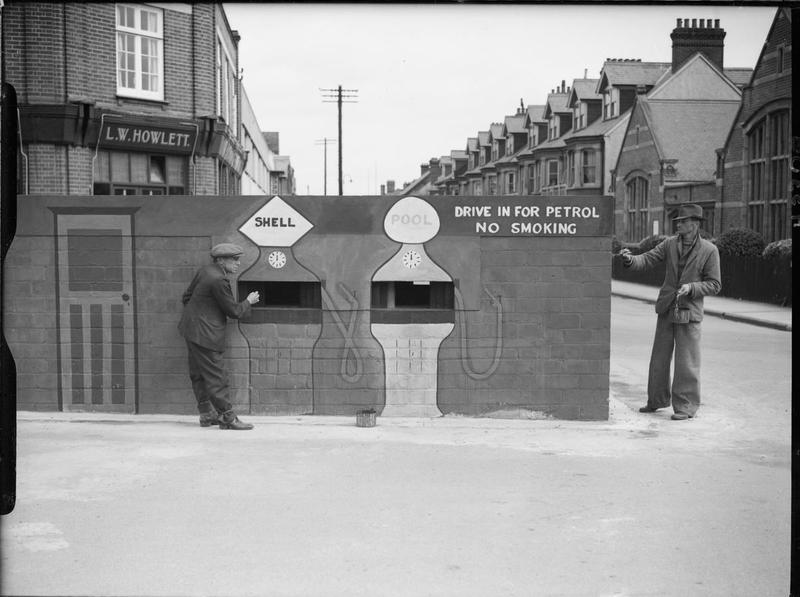 Other Examples Of Pillbox Merging And Disguise 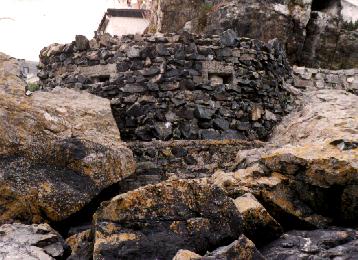 Local Stone Used To Face The Front Of This Camouflaged Pillbox At St Ives, Cornwall

The structure has been faced in local stone to merge it into the cliff. From the pier at the harbour entrance opposite it is very difficult to see unless you know exactly where to look! 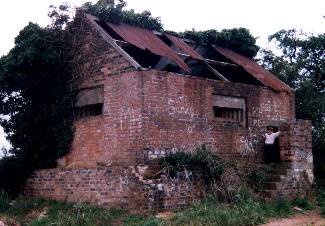 Pillbox Camouflaged To Look Like A House At Raf High Ercall, Shropshire 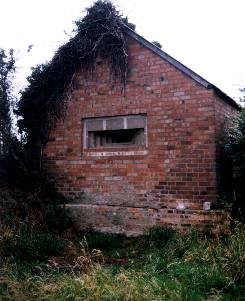 Not only has the top been disguised with a pitched roof to make it look like a house but the end loophole facing down the country lane was covered in canvas and a cottage style window painted on it in white paint. You can still see some of it around the loophole! 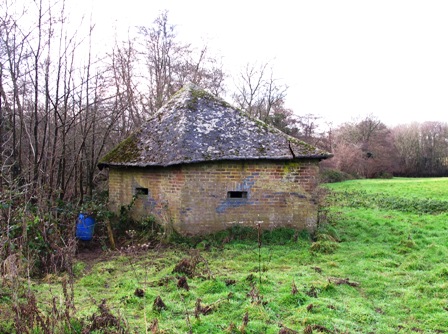 A Shellproof Type 24 at Buxted in East Sussex facing the River Uck, this pillbox has a pitched roof made from a thin concrete based mix supported by timbers . The defence still bears traces of disruptive camouflage painting.
It was reportedly constructed by a firm that specialised in building farm barns.
Pic by Tim Denton.

by John Hellis, Pillbox Study Group Co-ordinator – from an article in Loopholes Journal No. 2