I took these photographs of the remaining seagull trench at the former RAF Calveley, near Nantwich, Cheshire, in April 2004.

It is located at the NW corner of landing ground between the perimeter track and runway of Calveley Airfield, (Grid ref: SJ 5922 5763 ) according to DOB data Base, which I agree with. However, what I don’t agree with, with regard to its listing by DOB, is that it is ‘Condition: Destroyed’!

Much of the airfield as a whole is intact, with the hangars in use for industry and the control tower and associated buildings apparently used as cattle shelters. The only ground defence I could locate was this seagull trench. An odd structure, it does rather dominate the landscape, but at the same time offers far less protection for its occupants than a traditional pillbox.

Accepting that its function was presumably defence against seizure of the airfield by lightly armed airborne troops, one is nevertheless drawn to conclude that it would have been useless against a field gun or even well aimed rifle grenades.

In construction it is very like other pillboxes at RAF sites in and around Cheshire, notably those around RAF Woodford. How on Earth men were expected to fight effectively from these gaping apertures I do not know. Had I been with the RAF in Cheshire I would have begged for a transfer to Byley! 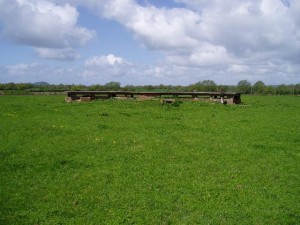 Note how a head raised above the parapet would have been silhouetted against the opposite aperture. 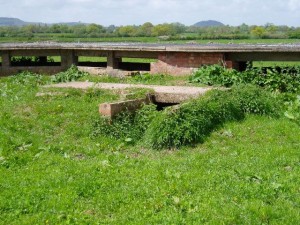 This shows the entrance which is remote from the structure itself. Access is via a short tunnel with a blast wall. 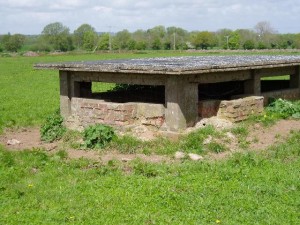 Although covering a ‘trench’ the structure does not appear to have deep foundations, another reason to think that it would be no match for well aimed ordnance. This shot also shows the bitumen which covered the roof. Against the green of the grass this would have made it stick out a mile from the air. There is no evidence of turf on the roof – does general experience show that this increases or lessens over time?

This photograph was taken from the eastern side of the airfield and shows the extent to which the seagull trench overseas the whole site. 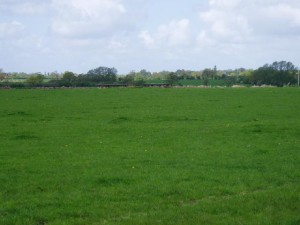 Worth a visit. Much of the airfield is grazed by cattle – there’s nothing much to see where they are, so please don’t bother to disturb them. Best access is via the A51 Nantwich-Middlewich.

Going West, look for the hangars on the left, then turn down a new road with a farm at the end (if you reach the ‘Calveley’ sign, you’ve missed it). Straight up the road, until you come to AM buildings. Walk from there. Seagull trench is obvious. Choose a good dry day and/or wear boots.

At the time of writing the seagull trench itself is flooded and the ground is waterlogged, worst nearest the road.