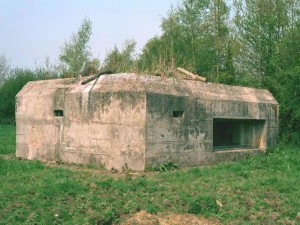 Generally, the pillboxes are positioned to allow the gun to fire along fixed lines, such as enfilading fire across an anti-tank ditch or a bridge. In these positions the limited traverse of the gun creates no real disadvantage and the small size of the embrasure provides greater protection for the gun and its crew. 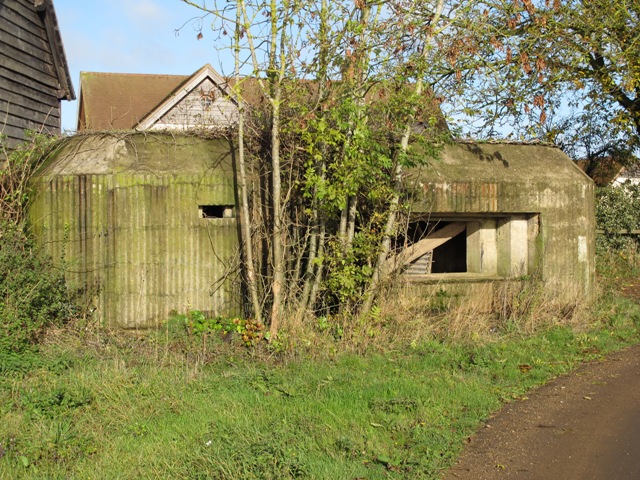 Access for the 2 pdr gun is through a 6 feet (1.8m) wide door in the rear wall. No attempt was made to block this large opening with steel doors and it can only be assumed that the entrance would be sandbagged during action. The large entrance does allow the 2pdr gun to maintain it’s mobility, allowing rapid deployment or withdrawal of the gun. 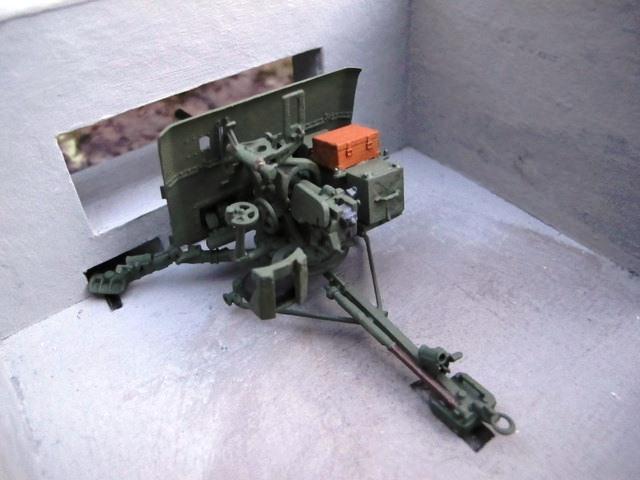 The 2 Pounder QF Anti-tank Gun set within a Type 28 emplacement. Note how end of trail legs fitted within the purpose floor slots recesses below embrasure and rear of gun. (Picture and model by Tim Denton 2012). 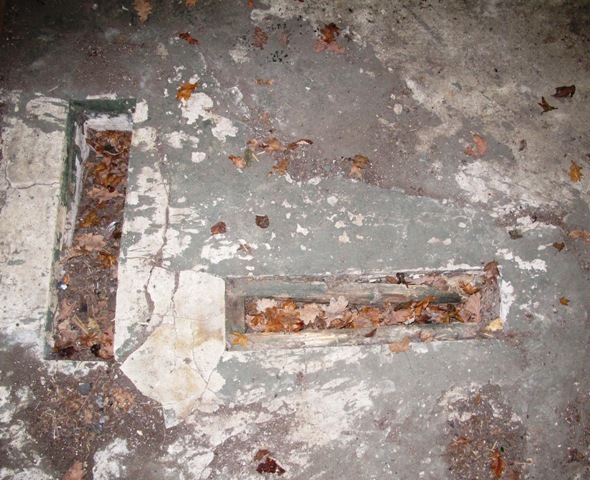 To overcome the problem of the limited number of infantry embrasures the FW3/28 pillbox design was modified to produce the FW3/28a.

The modification consisted of a second chamber being added to the anti-tank gun chamber of the type 28. This second chamber was an infantry chamber with up to three infantry embrasures firing to the front, rear and side.

Rear corner view of Type 28A Pillbox note sealed side embrasure and partly blocked up doorway.

Internally, the infantry chamber measures 6 feet by 12 feet (1.8m by 3.6m) and is separated from the other chamber by a 12 inch (30.5cm) thick wall. The infantry chamber would be built either to the left or right of the main chamber depending on the local tactical situation.

The addition of the second chamber means that the external measurements have grown to 27 feet by 19 feet (8.2m by 5.8m).

With an armament of one 2pdr gun anf four infantry positions this pillbox would be able to engage enemy armoured vehicles and enemy infantry.

This largest variation of the of the FW3/28A 2Pdr gun emplacement was constructed by forming two type 28A pillboxes together to give one massive square design with two 2Pdr embrasures. Each embrasure was set at right angles to each other, this enabled the 2Pdr gun to switch positions if required. Each defence had provision for two Bren gun annexes; some variations can be found with two Bren loopholes in one side thus allowing a wider field of fire.

This particular design is unique to the GHQ Line Red in the Sulham Valley where twenty two were constructed, two further examples can be found on GHQ Line Blue along the Kennet and Avon Canal, the most well known of these can be seen at Hungerford Common covering the canal and railway bridges. 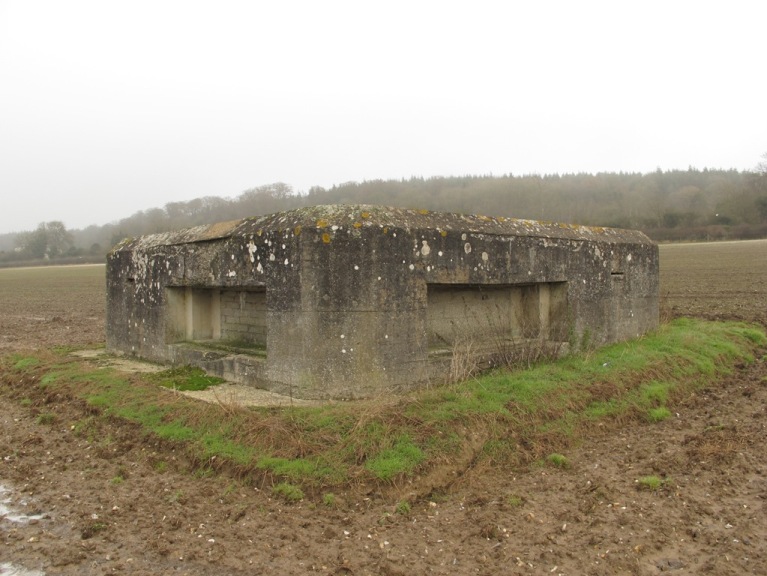 The FW3/28 design was adapted as an infantry pillbox by replacing the main 2Pdr loophole with a simple Bren gun embrasure, examples of this particular design can be found along the River Mole on GHQ Line B between Betchworth and Horne in Surrey, a small conncentration of this variant can also be found west of the A22 Road at Blindley Heath in Surrey. The immensely spacious pillbox with its offset rear entrance is normally found with three embrasures, inside the weapon tables have elongated slots to accommodate the Bren Guns rear tripod legs.  In “Ironsides Line” Colin Alexander suggests that this Line B pillbox type may have been originally designed to take the QF 6 Pdr but this changed and the defence was built with three smaller loopholes when the QF guns were required for the forward stoplines and coastal defence. 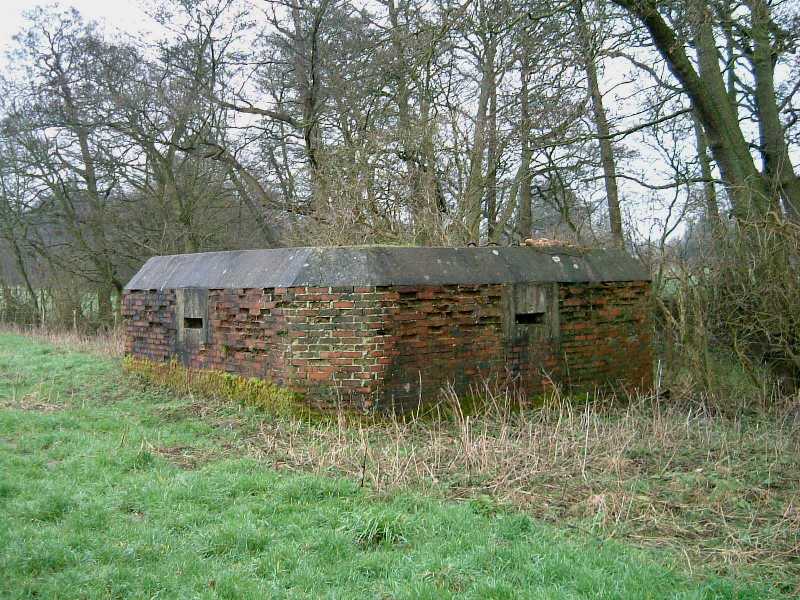 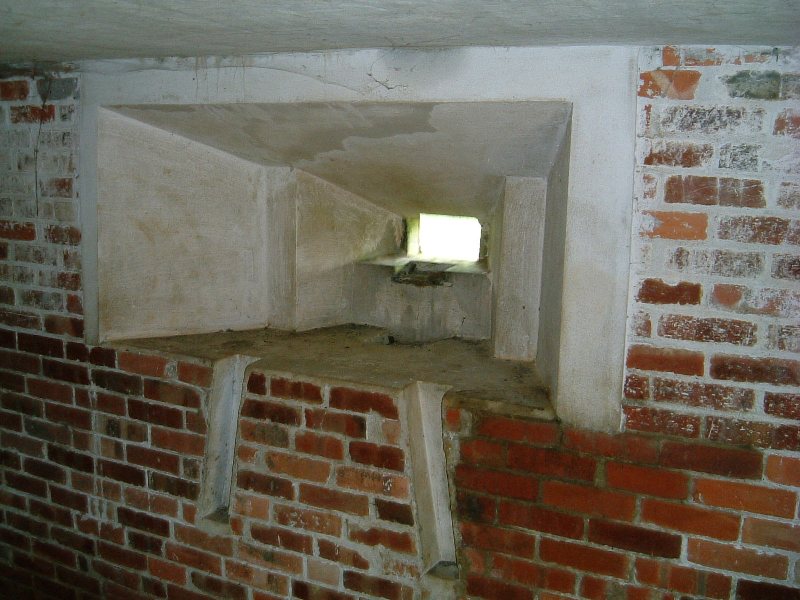 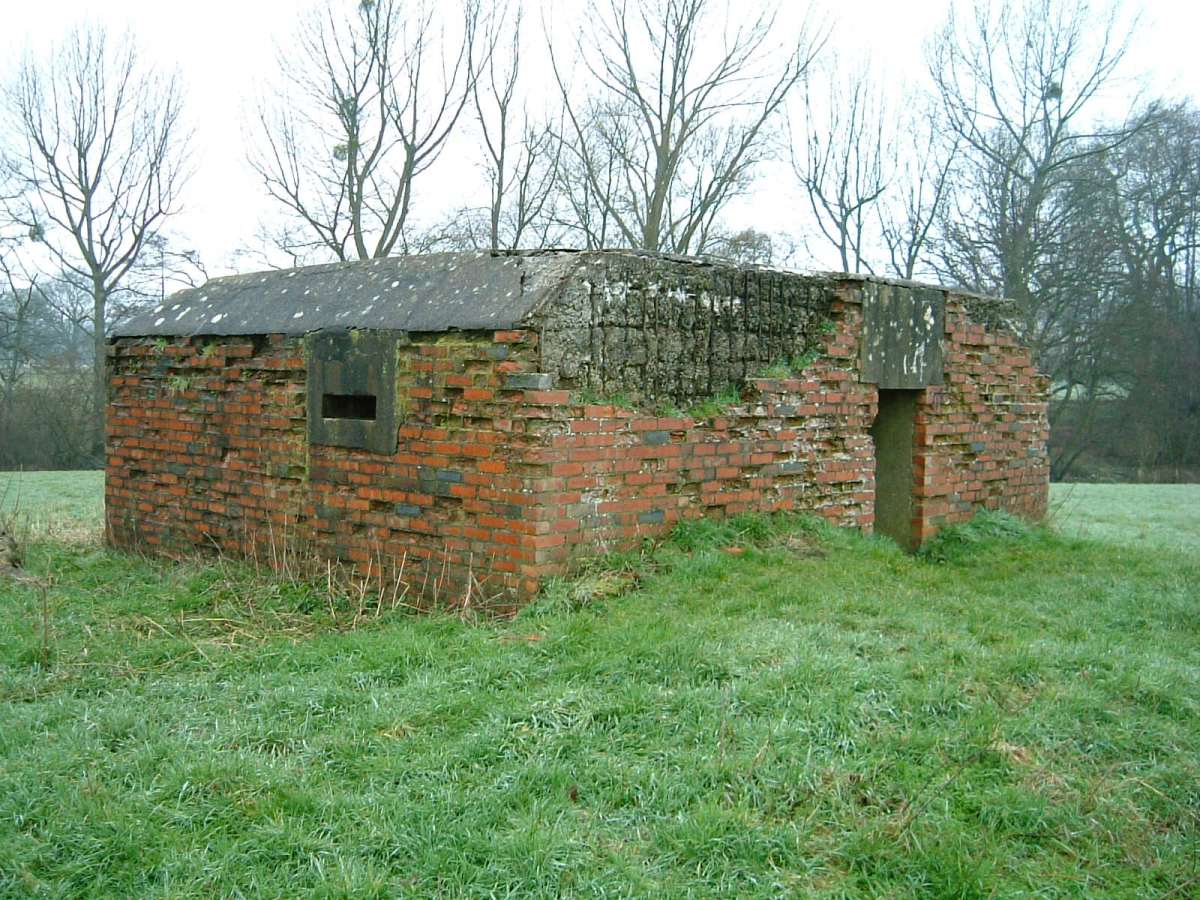 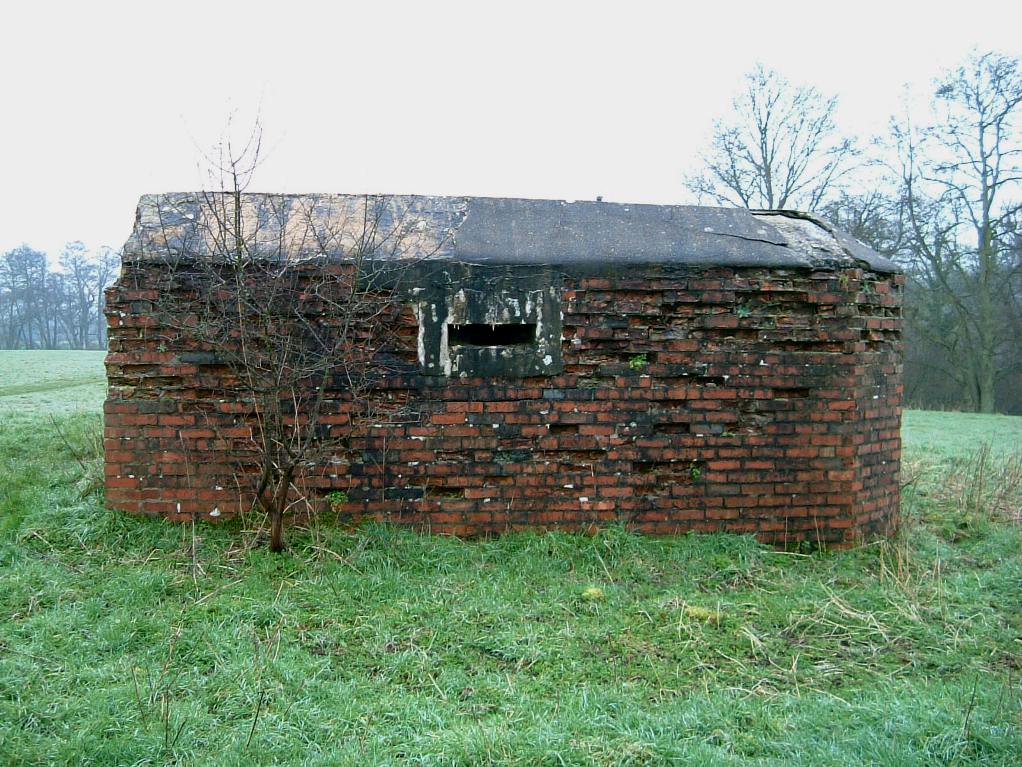 Side view of FW3/28 Infantry Pillbox 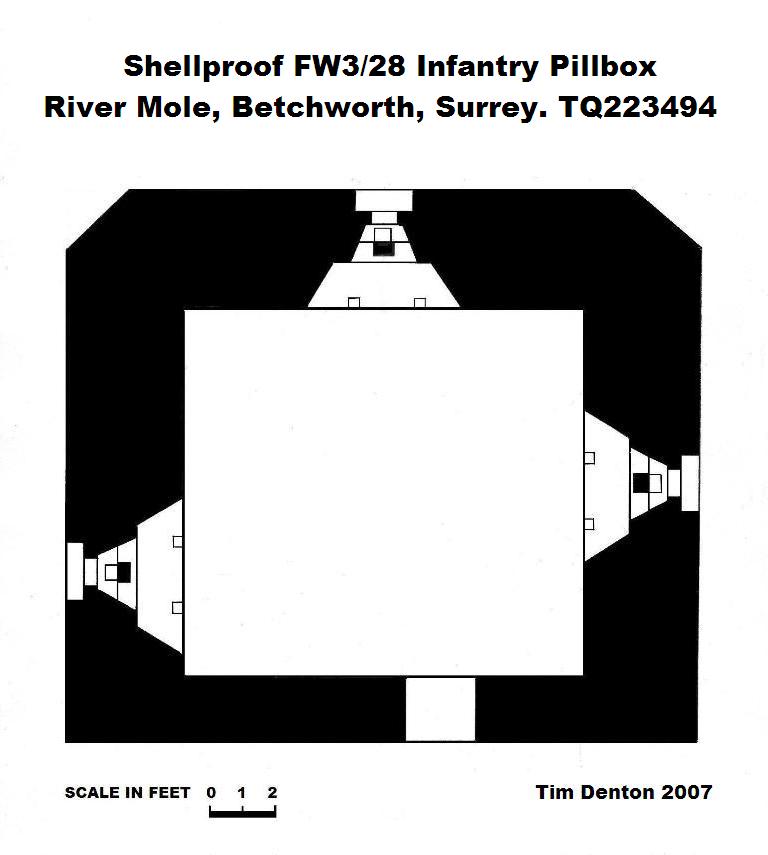 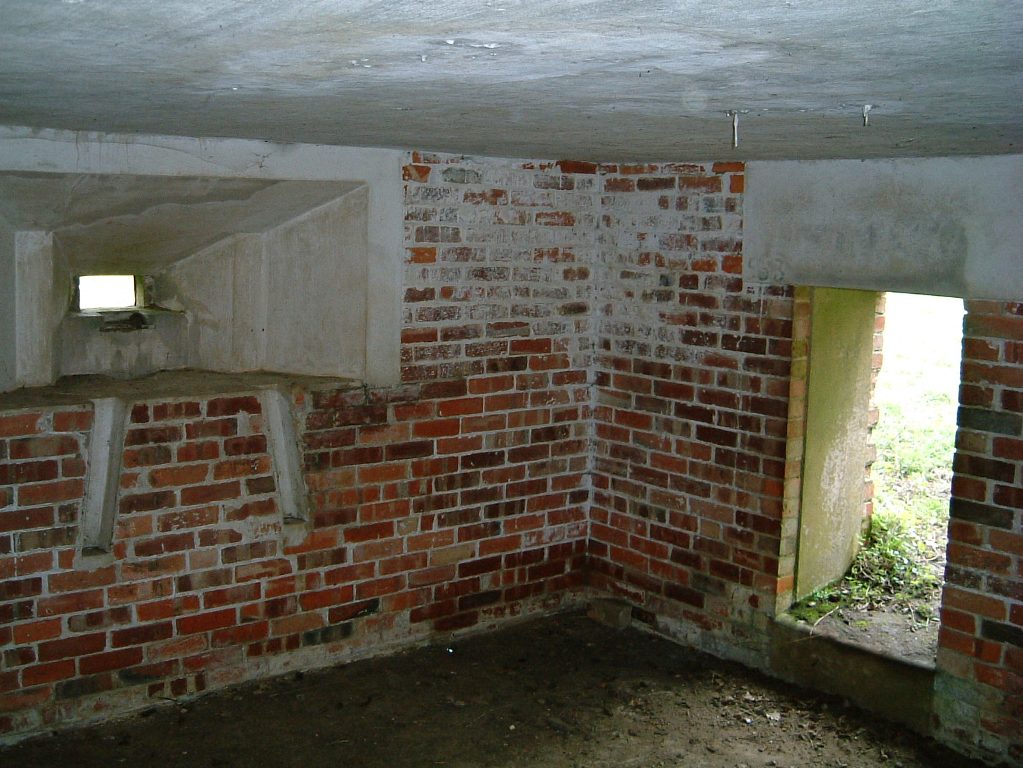 A variation of the standard type 28 pillbox found in Sussex designed to accommodate the ex navy Hotchkiss quick firing (QF) 6 Pounder gun. The defence is of an asymmetrical shape and has a separate annex on its right hand side to accommodate two Bren guns firing on tripods. The annex has a foot thick dividing wall with small aperture between the main 6 pounder gun and infantry chamber. A separate side loophole within the main section protects the pillboxes left flank. A large full height rear blast-wall with small loophole protects the central doorway. To relieve the interior of fumes and smoke large vents slots can be found at the rear and side of ceiling. 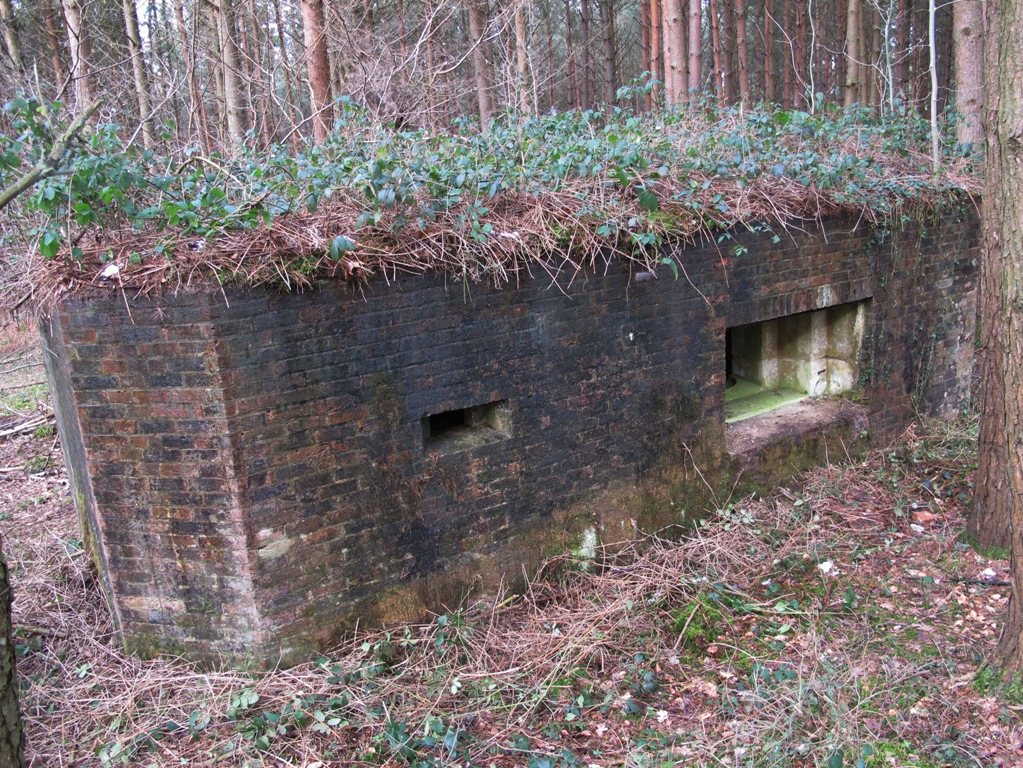 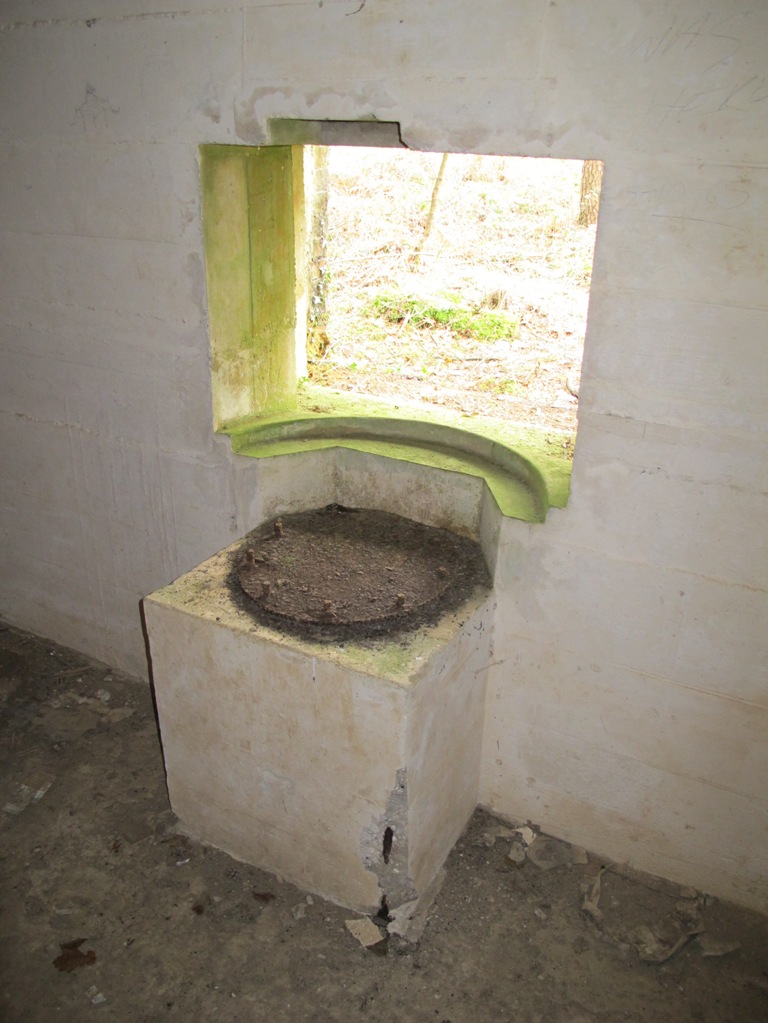 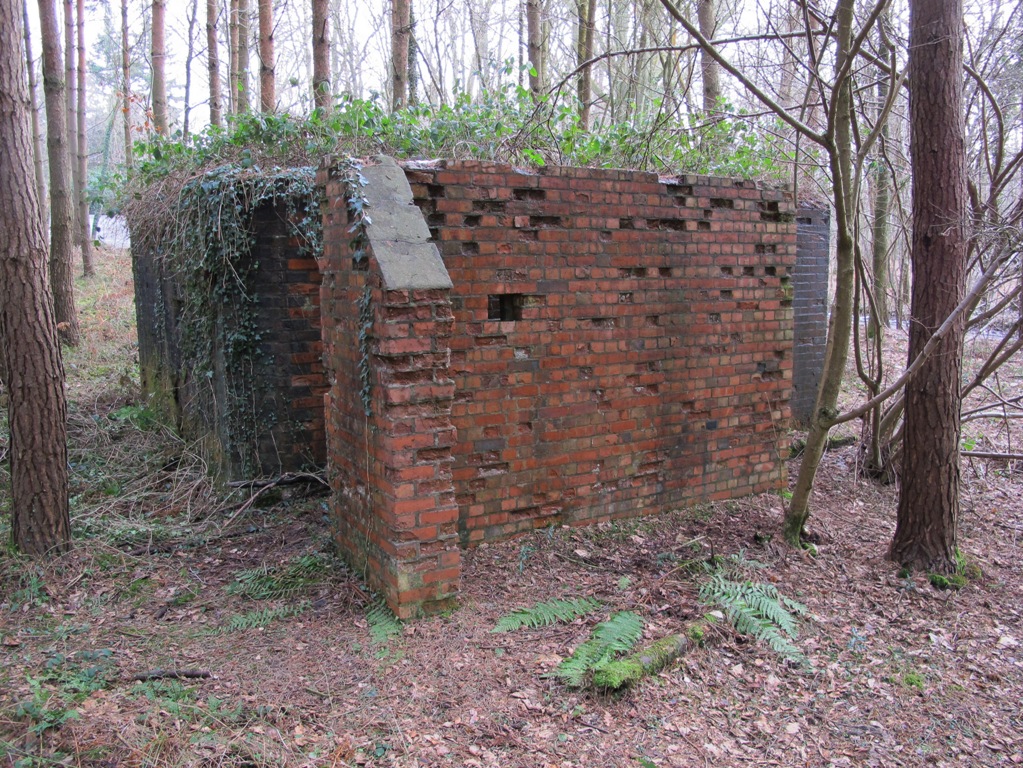 These large emplacements can be found on the Arun/Ouse stopline in West Sussex covering road blocks on main routes such as the A23 London to Brighton Rd at Slaugham and the B2110 at Handcross, other examples can be found close to crossings over the River Arun at locations that include, Slinfold, Broadbridge Heath and Bucks Green near Rudgewick. 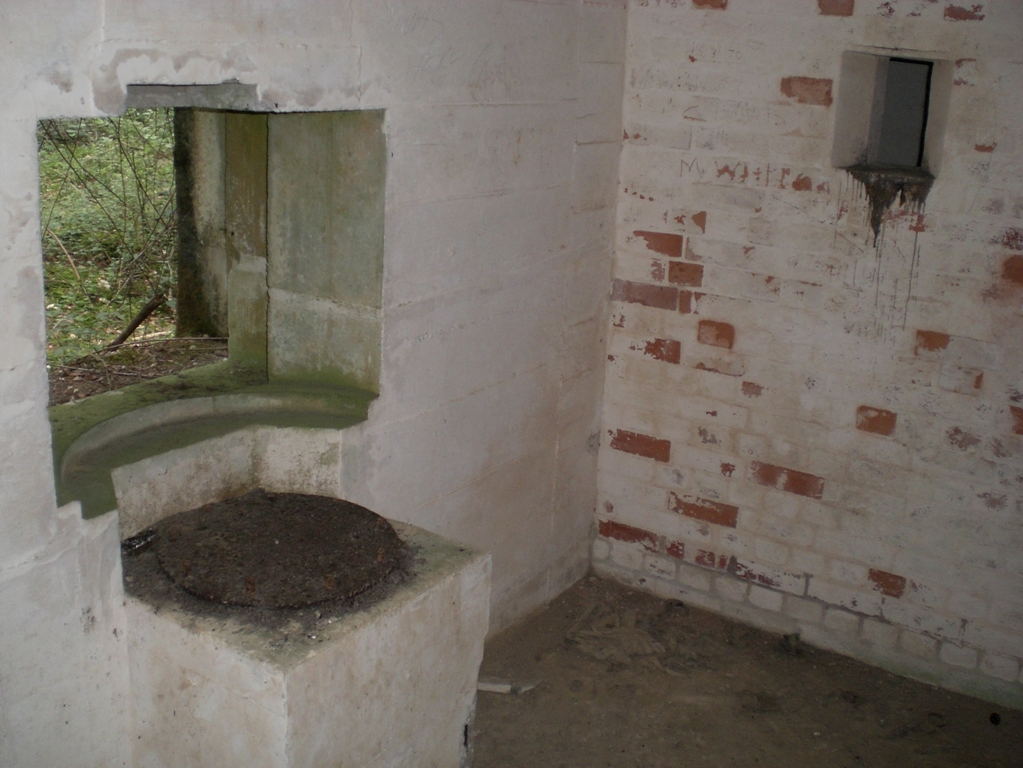 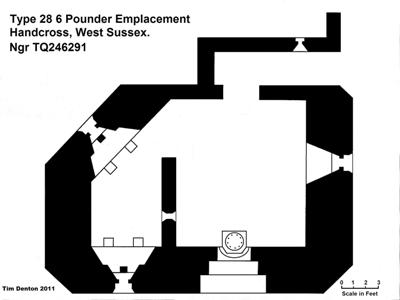 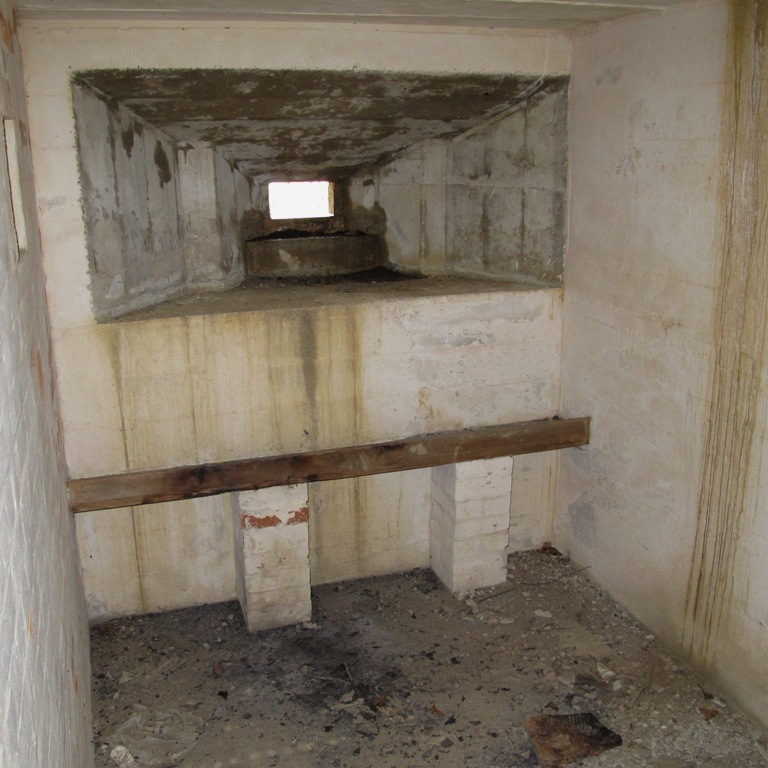 This excellent condition FW3/28 QF 6Pdr emplacement can be seen at Broadbridge Heath near Horsham at ngr TQ144303, the defence is positioned facing south west which enables it a clear view across the field to cover a road block crossing over the River Arun 180 yards away. 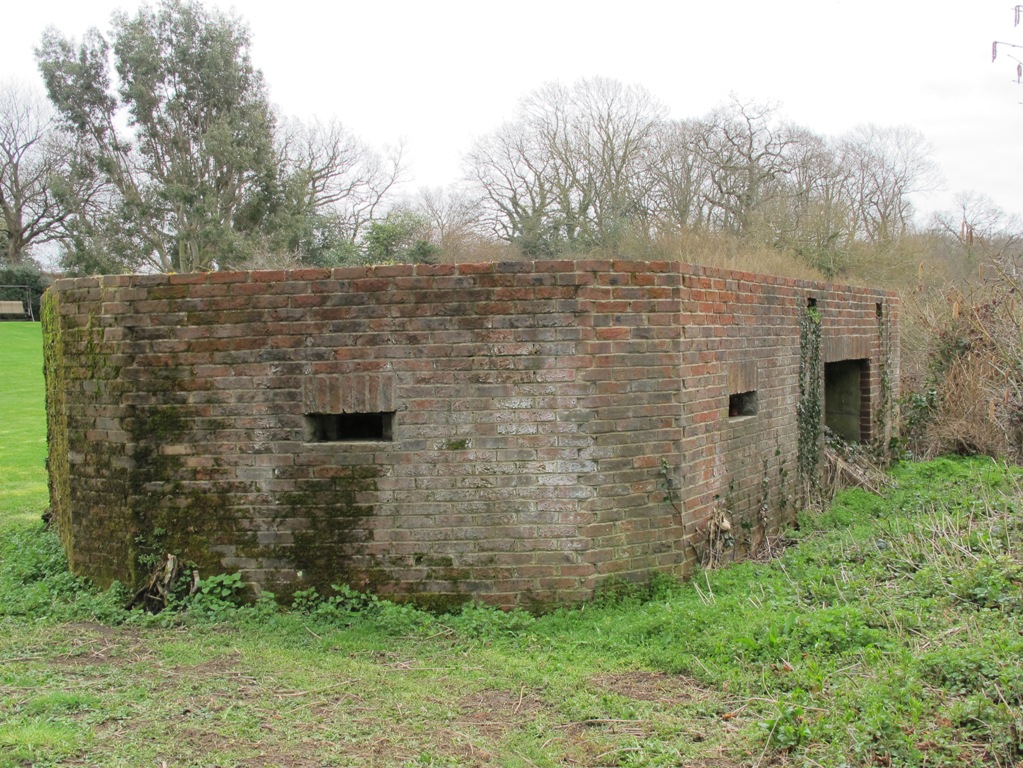 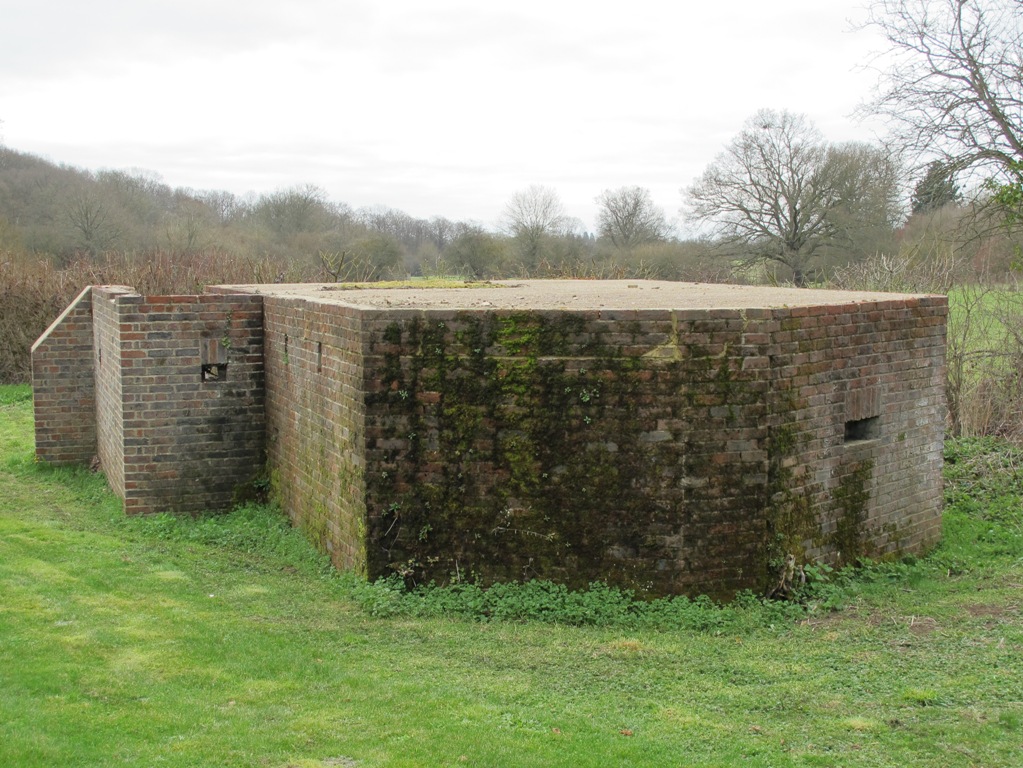 Side and rear view showing its blastwall 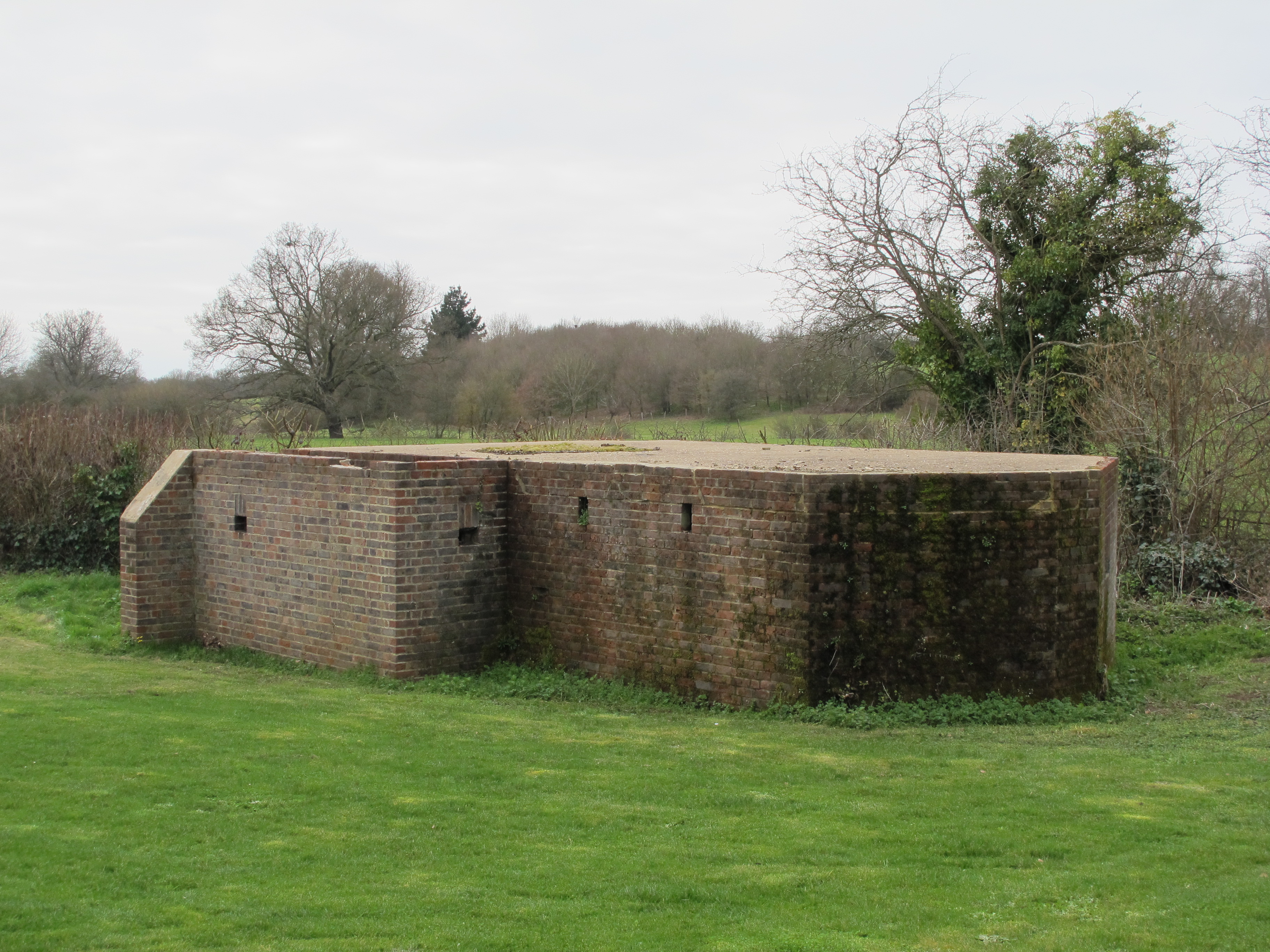 A simpler design of the FW3/28 QF 6Pdr can be found without the seperate infantry machine gun chamber, examples can be seen along the route of GHQ Line B in Surrey and in Sussex, the most well known of these is the pillbox on the slopes of Box Hill at Dorking, another can be found at Sidlow Bridge in Surrey protecting a crossing over the River Mole. A good example in West Sussex has an L shaped blast-wall and defends a small bridge on the A281 Brighton Rd near Mannings Heath, Horsham. 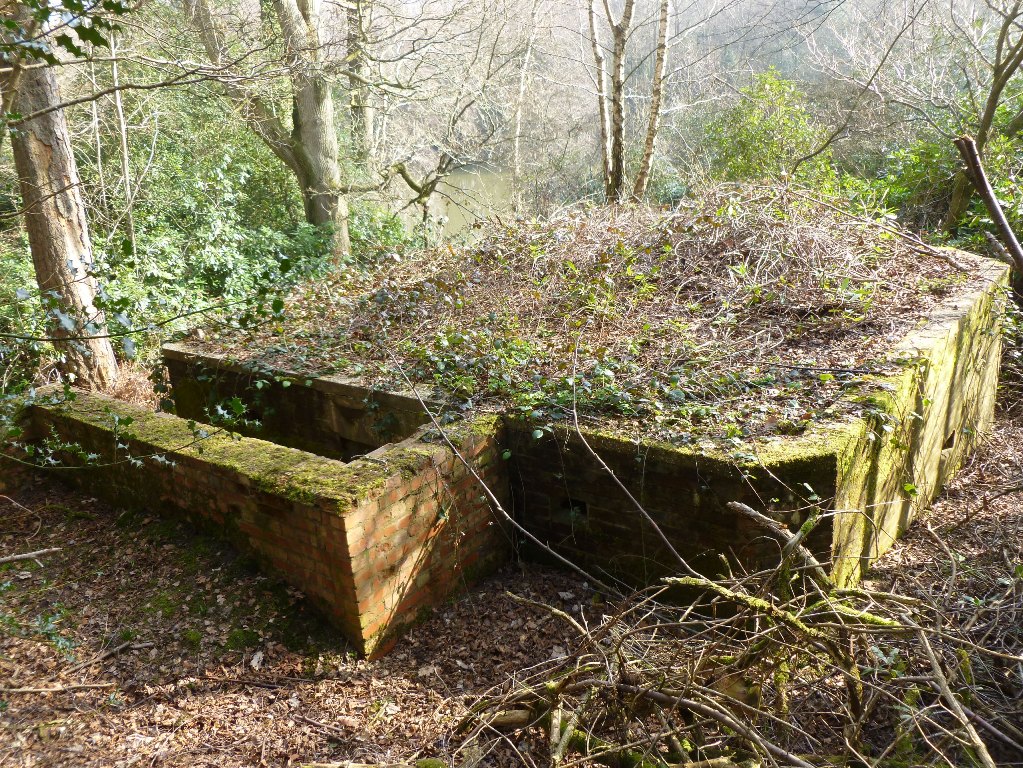 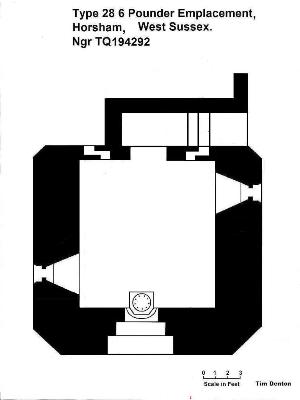 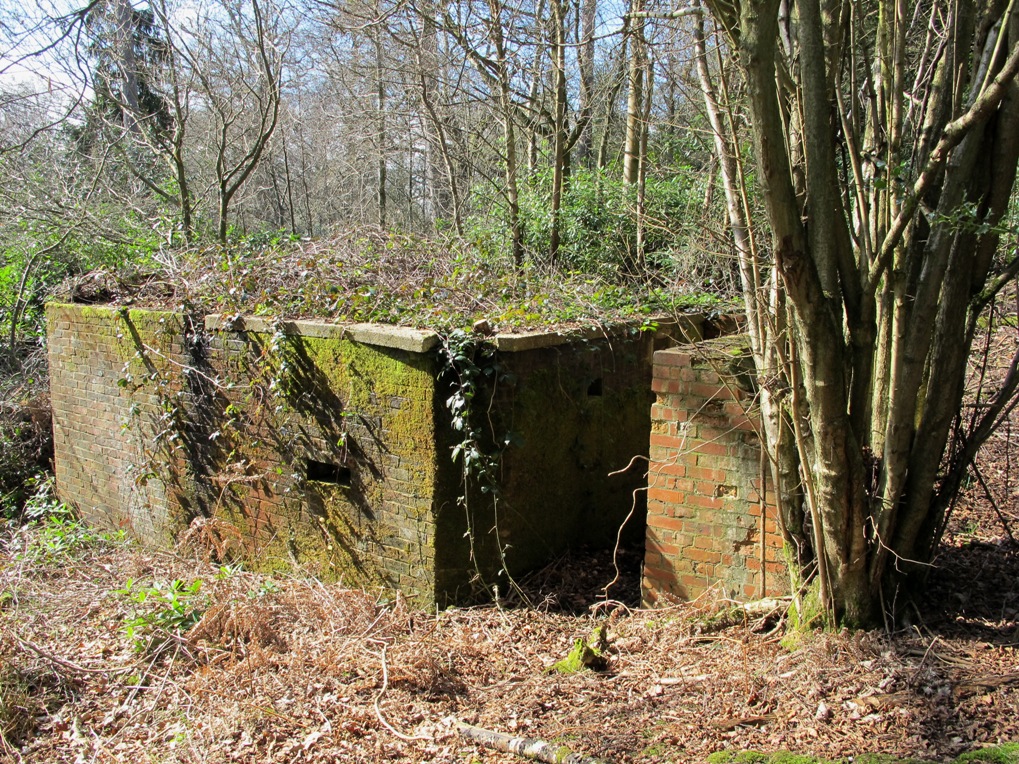 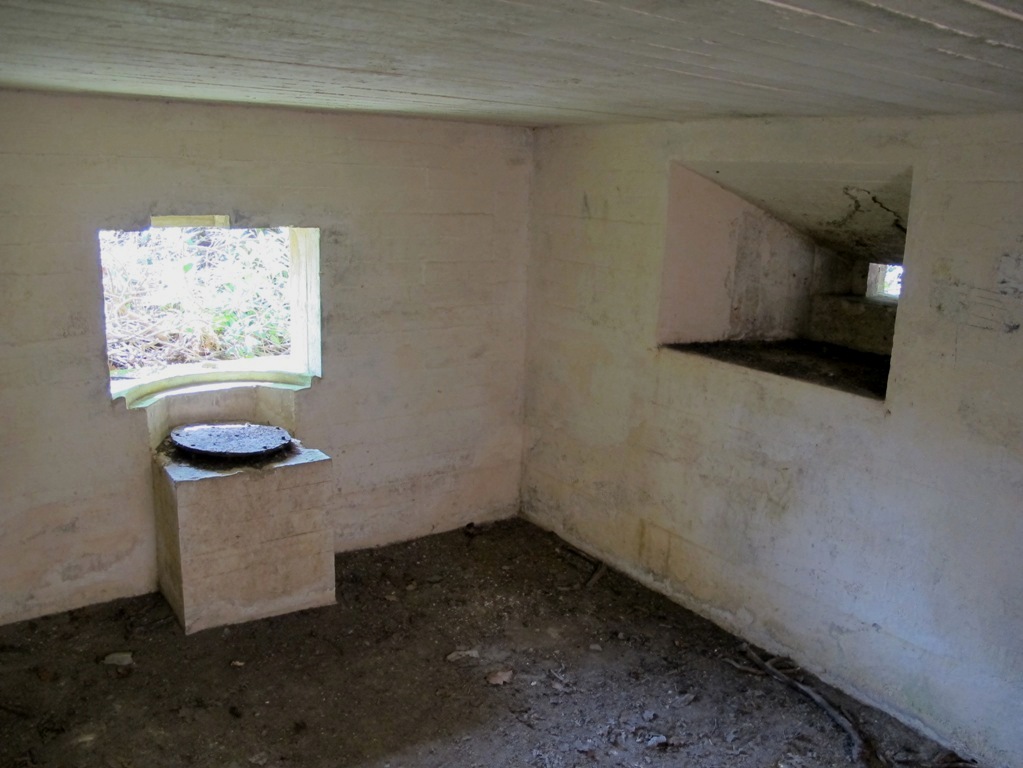 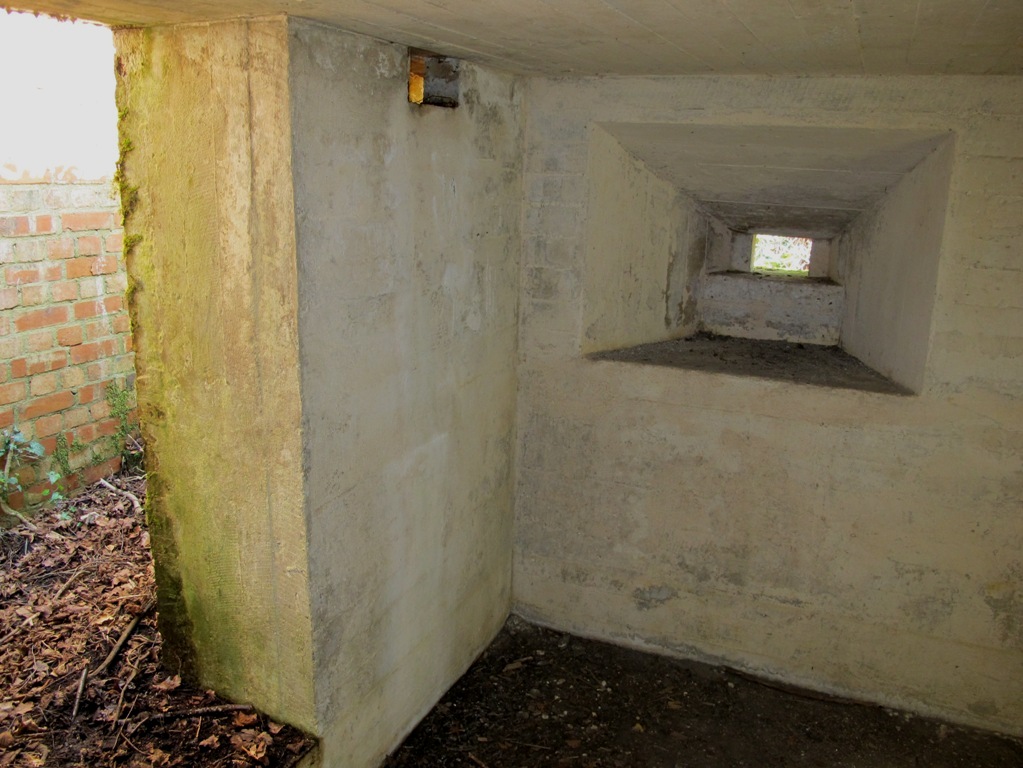 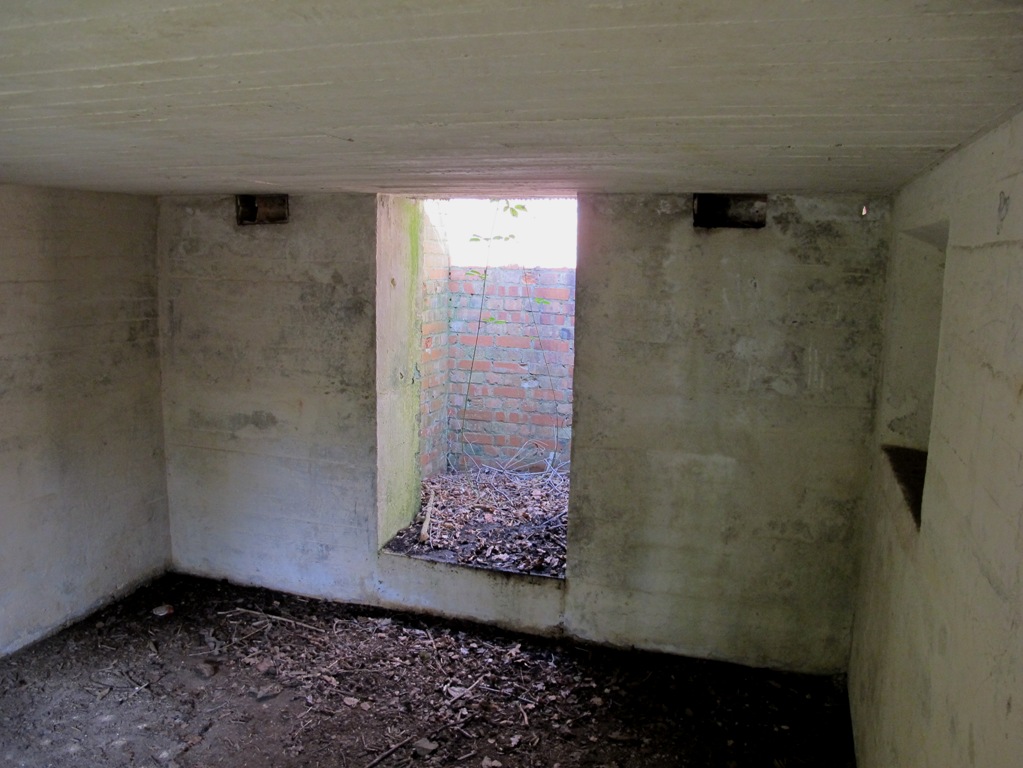 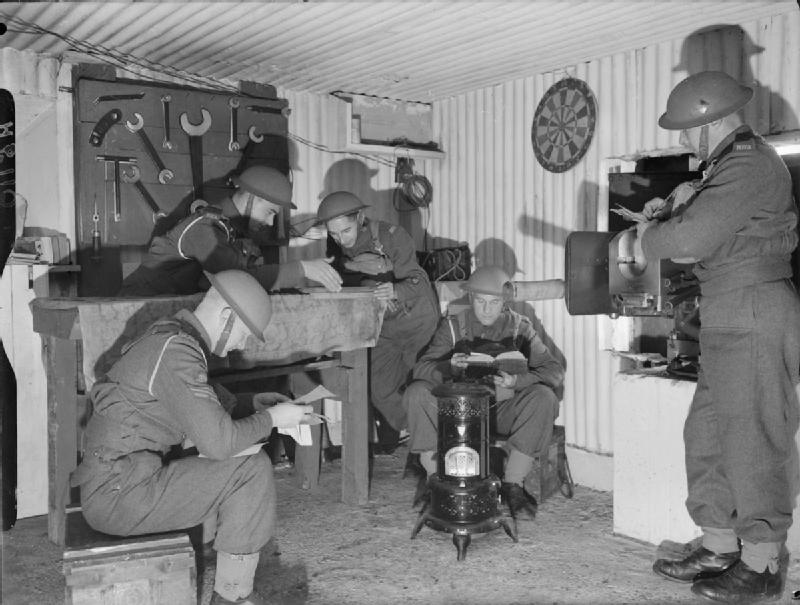 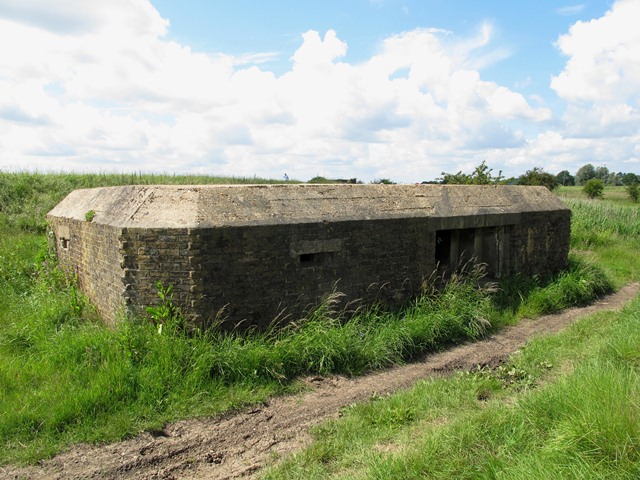