Although not a pillbox here is a wartime structure that I found in Berkshire in an area known to have been used by the 501st and 101st Airborne during the build up to D-Day. 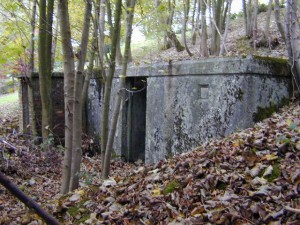 It is about 15ft by 8ft divided into three segments. Two small rooms and a central entrance with 9 inch thick in-situ concrete wing walls to the left and right allowing access round the ends into the small rooms. There is a brick `thing` about the size of a toilet inside.

The little squares to the front face (and to the rear as well) are tapered slots/windows with a tapered piece of concrete plugging them up. The plugs appear to be original and not put in later to fill up the hole. 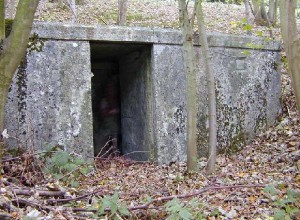 The internal height is about 6ft max. Around the top of the walls internally is a timber board let into the concrete which may or may not have served a purpose (securing something to the walls?).

The roof is again in-situ concrete with a rebate to the junction between wall and roof. the position of the door frame was also let into the concrete which all seems too complicated unless it served a specific purpose. There is no evidence of any blast walls in front of the access door.

It appears to be an ammunition store with what could be a fuse store in brick to one side.